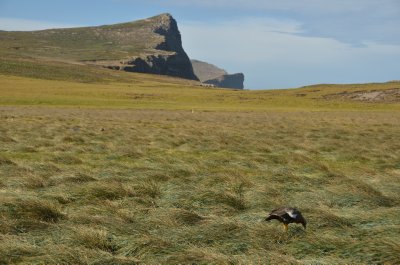 I fell in love with the Falklands almost immediately. From the ocean, the Falklands appear to be a barren collection of windswept islands. Upon closer inspection, the landscape consists of long grasslands that rise slowly from one side of the island to the other before falling abruptly into the sea below. The wind blows relentlessly from the west, building waves that smash into its western shores in a foamy crescendo. 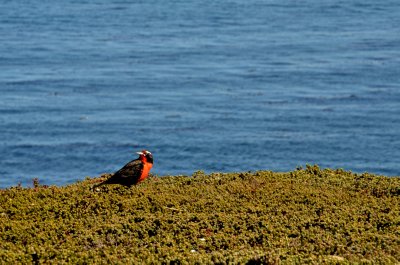 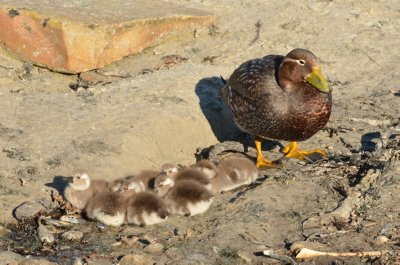 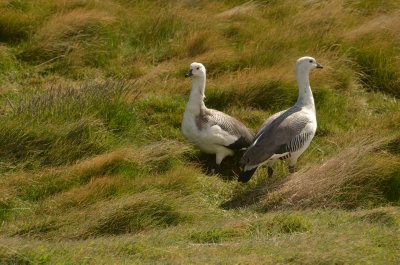 Birds are everywhere. The upland geese graze along the hills like docile cows. Long-tailed meadowlarks sing among the tussocks. Turkey vultures glide effortlessly on the strong breeze above the highlands, and penguins, albatross and shags populate the rocky cliffs. These islands are far from barren. 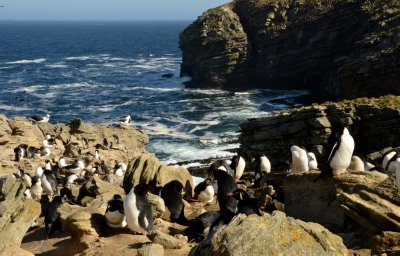 I stood upon a western cliff of New Island not more than ten feet away from a breeding colony of rock hopper penguins, black browed albatross and blue-eyed shags. There were hundreds of birds along one section of cliff. These birds were mixing in a giant melting pot of feathers and fowl language. The cacophony of three types of birds squawking over the bashing surf was intense. 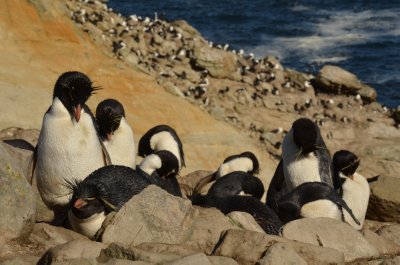 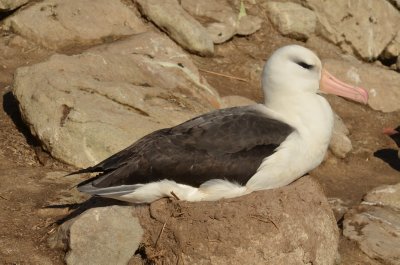 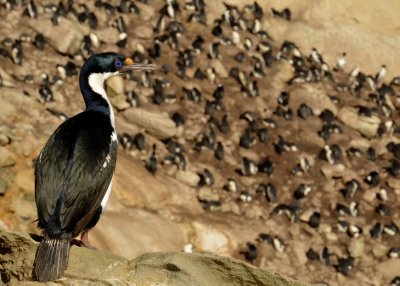 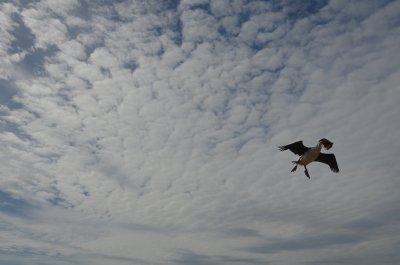 The penguins hopped up and down the cliff (hence the name) from their nesting site to the top of the cliff. They were keenly interested in dried grass in which to build their nest. The shags had the advantage with the ability to fly and could gather grasses in clumps from the hillside before crash landing into onto a narrow section of unattended rock. The giant albatross stood watch on their nests. On occasion, they would waddle over the slanted boulders often tripping over their giant webbed feet. While good for swimming, the webbing makes for walking over boulders quite difficult. Imagine wearing snorkeling fins and walking through a pumpkin patch, and you can see the difficulty. 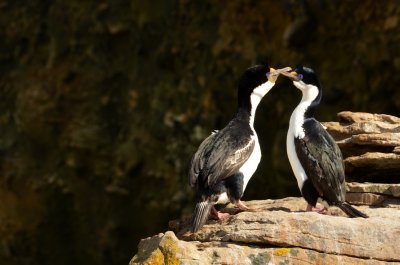 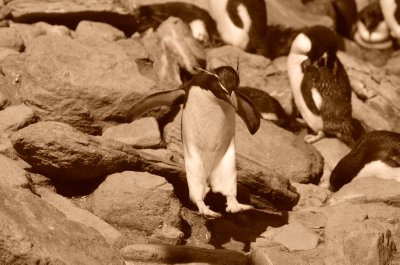 Besides the din, the cliff smelled much like a bird colony- the pungent aroma of guano wafted through the breeze. I walked the ridge stopping at intervals to admire the variety of birds. For me, the rock hoppers stole the show. This was my first experience among penguins in the wild, and, well, if I didn’t love penguins before, I certainly love them now. 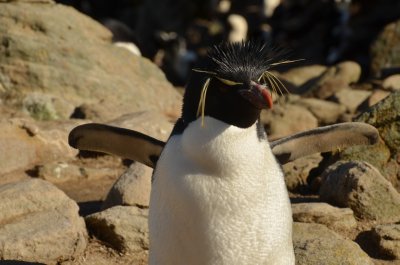 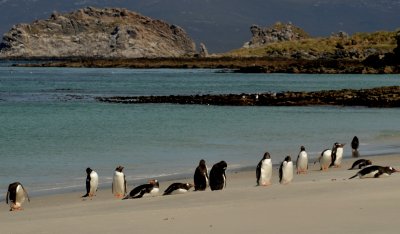 I passed by a line of Magellanic penguins that sat idly on one of the beaches of Carcass Island. They were content to stand or lie down in the warm sand, seemingly at ease. I gave them a wide berth as I passed them, climbing up onto the flat grassy plain fifty yards past the waterline. 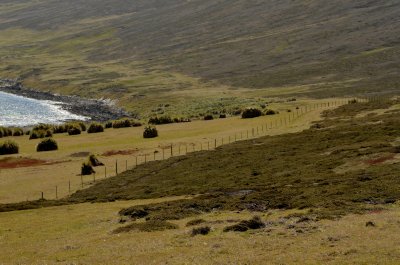 I walked counterclockwise around the large bay at the south end of the island. The land rose steadily from the waterline to a ridge high above me, but I was content to walk the path that straddled the fence line. The owners of the land raise sheep. In the distance, I could see their dirty cream bodies high on the hillside.

The walk was very pleasant. I took my time, enjoying the beautiful landscape spread out in front of me. The afternoon sun was warm, and I was glad I hadn’t worn any heavy clothes. Who knew the Falklands would have such nice spring weather? I sat down in the warm grass to make some quick sketches of the landscape before moving on. I listened to the plethora of birds, and decided the Falklands are a birders paradise. I walked on. 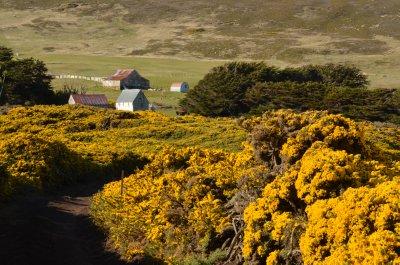 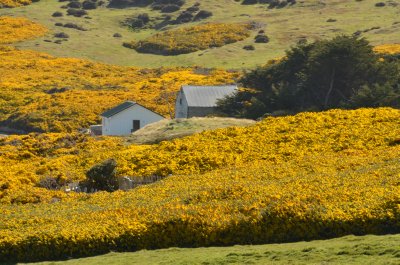 As I neared the farmhouse, I passed bright yellow thickets of gorse. The gorse plant is an invasive species to the Falklands. If left unchecked would run rampant over the native vegetation. The thickets are incredibly dense; a twisted trap of strong branches and razor sharp needles. I wouldn’t want to try to walk through such a devilish mess. For as nasty as navigating through them would be, to walk around them is quite enjoyable. The bright yellow petals of the gorse are quite beautiful, and they smell of coconut oil. Many songbirds would sit atop the gorse and sing its springtime song as I passed by. 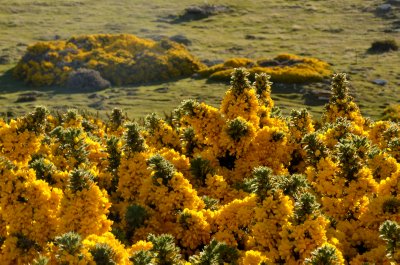 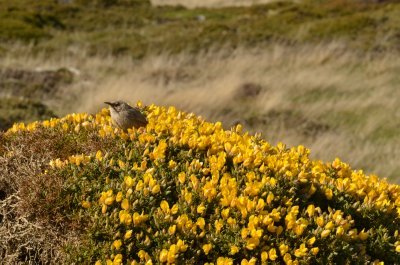 “It was one o’ them zippidy doo-dah days.” ~Uncle Remus. 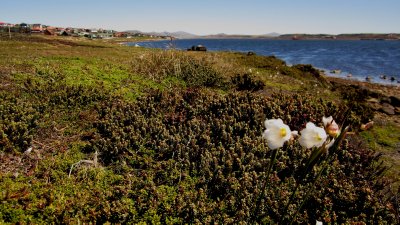 Stanley is not a large town, with something near two thousand full time residents. Stanley sits on a long gentle hillside. The homes and businesses terrace downward from the top of the ridge to the water. The houses are a comfortable size and built low to the ground to get out of the wind. The small yards stand in their natural state, with clotheslines strung up for wet laundry. The strong breeze makes quick work of wet laundry on a sunny day.

The central area of downtown is British. It reminded me of images of the quaint British town, full of red telephone booths, small shops bunched together and narrow twisting cobbled streets. I wasn’t much interested in the many gift shops (much to my niece’s dismay). I was on a mission. I was trying to find two trees with just the right distance between them.

The problem was I was having a hard time finding trees. There aren’t many trees in Stanley, and most of them belong to the government. I walked through the memorial wood of 1982, but the trees were too flimsy. I also felt it might have been disrespectful to the fallen, or those that loved them. The Falkland Conflict of 1982 is still fresh in the minds of the residents. I was there on Remembrance Day; more on that later.

I walked past the chapel, past schoolyard playgrounds, and all the way to government house. In fact, I was navigating by treetops, hoping that I would find two trees that would suit my purpose. But all of the trees I found were surrounding public or private buildings. I was about to give up.

Finally, I found an empty playground with a telephone pole and a jungle gym the right distance away. I smiled. The warm grass felt good on my bare feet as I took to the line. During my session, a tour bus full of passengers drove by, and the driver announced in full British accent, “And here we have a man walking a tightrope in the park. How very strange…” 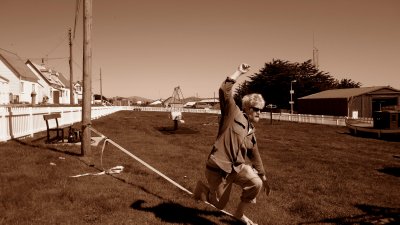 One of the passengers told me this when we later met on the ship. I laughed aloud at my strangeness. 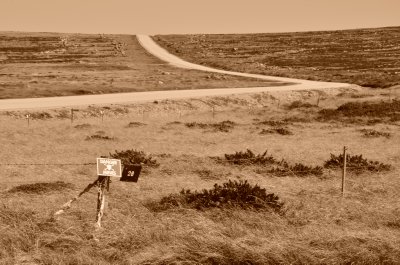 I stepped off the bus onto a gravel road right next to a minefield. This was my first minefield I’ve been close to (unless you consider the cross examination I’ve faced from several females I‘ve known). It was slightly unnerving seeing the minefield. Who knew if they found them all? I stuck to the path through the native grasses from the trailhead, and it took awhile before I felt comfortable in leaving it.

As I’ve said, the conflict of 1982 is still fresh, and there were still many reminders of the war all along this hike.

Hiking in the Falklands is easy and enjoyable. The ground often rises along a gradual slope that isn’t hard to climb. It’s not long before you are hundreds of feet above the trailhead from where you started. After making the initial assault to reach the ridgeline, I saw where Argentine troopers had dug foxholes into the damp earth. I haven’t walked through many war zones in my life, but it had a sobering effect on my hike. I kept wondering what it would be like to be here on this barren ridge, fighting for my life. 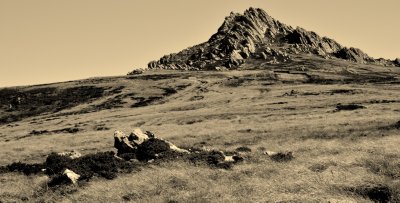 The heights of Mt. William jutted out of the ridge at a steep angle. I wanted to leave the group and climb them on my own, but I knew if I ran off to scale them, some other fool would too. While I’m confident in my own ability, I didn’t think most of my fellow passengers could handle what I had in mind. I stuck to the course.

From Mt. Williams I crossed a narrow peat covered valley across to Tumbledown Ridge. I weaved around perfectly circular holes punched in the peat where artillery fire had landed. From there we climbed up the rocks to where the cross stood. It stands to salute the British troops who had fallen in the skirmish. 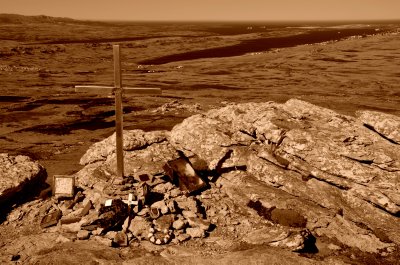 The wind howled over the ridge from the west. I could barely stand upright in the gale, and soon sat down to get out of the pummeling. I listened to one of our guides talk about the battle, how the fighting went from high point to high point all the way down to Stanley, several miles away. 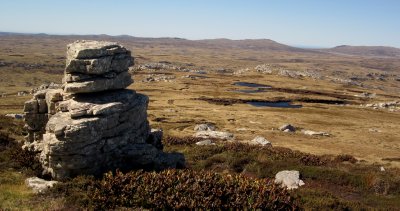 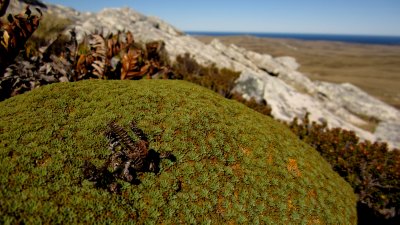 In fact, I really enjoyed the company of one of our guides. Derek’s family has been in the Falklands for over five generations. This is his home, and he is rightly proud of it. I asked him how his family came to the island.

“Well, back then the colonies offered a chance to get away. Quite a lot of us went to Australia or New Zealand, Canada or America, but somehow, we came here… It’s home.”

We chatted for the rest of the hike, enjoying the exercise and endless beauty around us. He told me he was in the Ramblers association, which had occasional group treks to various islands. I asked him what his favorite place was on the island.

“That’s a tough one; each island has its own charm. There are good things about all of them, I suppose. I like New Island. It’s very nice. And Carcass island is very easy to walk on.“ I had to agree. At one point, Derek walked off to gaze over a cliff, and I took this picture of him. Should you find yourself in Stanley and looking for an interesting guide, Derek’s your man. 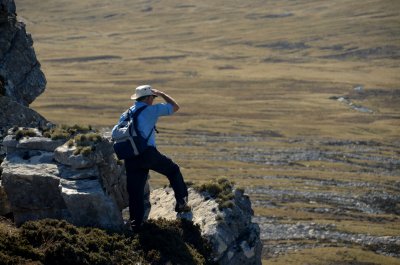 Though my visit to the Falklands was brief, I feel I made the best of it. I enjoyed two solid days of hiking, and became the first to slack line there. I hope I make it back there some day.

Our ship has since turned southeast and is heading towards South Georgia Island. We’ve been at sea for a day and a half, and expect to make landfall tomorrow. By all accounts, South Georgia is one of the most beautiful islands in the world, and full of dynamic wildlife. We’ve crossed the convergence zone of the southern ocean. This is where the water temperature drops, and currents between the relatively warm water of the northerly oceans meet the cold water of the southern ocean. I expect we’ll be seeing icebergs soon. 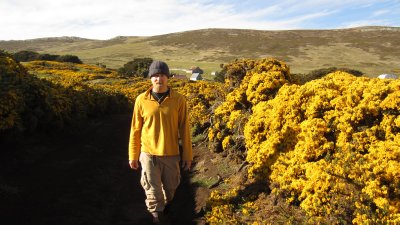