To Baja By Hammock

An Evening Spent in a Hammock, Sensing Baja, Our Passage South

We have reached the Cape (Land’s End near Cabo San Lucas) and the tropics. The air is humid, the air temperature is comfortable and warm. I’m back in my desert paradise. It hasn’t really set in, I suppose. I think it will when I see a pod of dolphins leaping through the air, or when I hike around the giant boulders of Bonanza Beach, and most definitely, when I swim for the first time. Where I come from, swimming in December is a death sentence. Down here, it’s like dipping yourself into the fountain of youth: so rejuvenating.

I rose out of bed at about 3 p.m. I went up stairs, fixed myself a breakfast of honey on toast, apple juice, and a double shot Americano. I brought it up to the bow, and sat down on one of our line lockers to eat. As I enjoyed the crunchiness of my toast, I realized a post breakfast in the hammock would be just the thing to start this day off right. 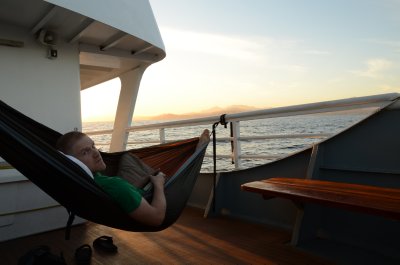 I set it up on the bow, stringing the slap straps between our anchor box rails and portside bow rail. Then I grabbed a pillow, two books, a journal, and my camera. I wrote in my journal (in fact, everything you are reading is excerpted from my journal), and read from Yutang’s “The Importance of Living.” I wish I had brought my hammock last year, but now I am a year older and a year wiser. I’m still living a good life. 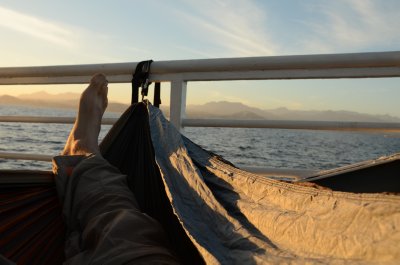 It is glorious. I’m rocking easy with the swells, comfortable in my nylon nest. The sun is setting, beginning its last hour of sunlight in the sky. The distant mountains of the Sierra de la Giganta are layer in the humid mists of the tropics. The sky is serene. Light cirrus clouds wisp southeasterly. The distant thrum of the engines is constant, and my white noise is occasionally broken by the non-distinct words of passing crew. The best noise is that of the wake off our hull. It’s a soothing chuffing rhythm, a rolling breaking wave followed by a moment of quiet before another crash of water sliced over on top of itself. The air is a mixture of ocean saltiness and cool humid air. Finally, though I am not eating, I realize that this tastes a lot like paradise. I’m glad to be back. 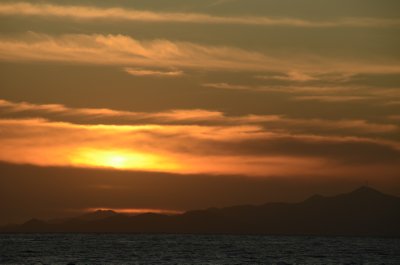 Our passage south was uneventful. We had one day of sloppy seas, the ocean had become quite confused with ocean swells and wind blown surface chop coming from two different directions. We rocked side to side for most of the day, making it very difficult to work or sleep. I enjoyed it. I love being at sea, and I accept what the ocean offers with a calm appreciation. You cannot fight the ocean, you just have to accept it and go with the flow. The ocean is a great metaphor for life.

I’ve been working nights once again, and I enjoyed seeing the beauty of the night. This week, the thinnest sliver of a waning moon would rise just before sunrise. Looking at it through binoculars is still one of my favorite views of the moon.

In working this shift, I would watch the sunrise break over the ocean scape, eat a good dinner of bacon and eggs with orange juice and go to bed by 8 a.m. Often I would sleep until sunset, stepping out my cabin to a glorious arrangement of colorful sun, sea and cloud. 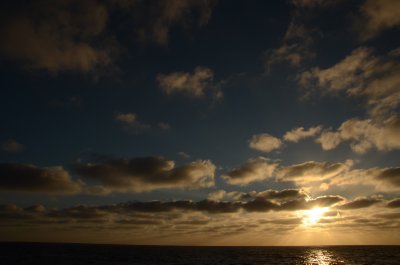 So begins my next Baja adventure. “Ah, Is this not happiness?”

The Architecture, A short History, and the Artistry 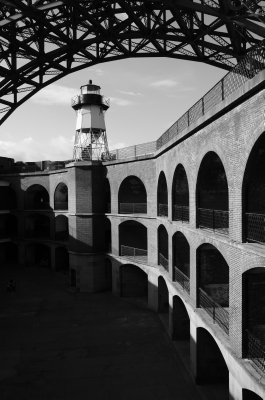 Fort Point National Historic Park is directly beneath the south side of the Golden Gate Bridge. The fort once protected the entrance to the bay with a military force of 24 cannons. It's odd to think of military force in terms of archaic cannons, but at one time they were state of the art. 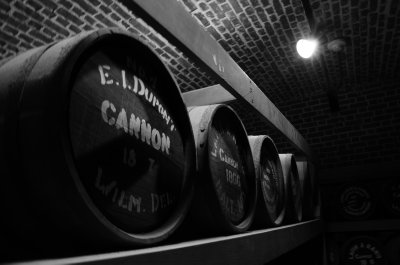 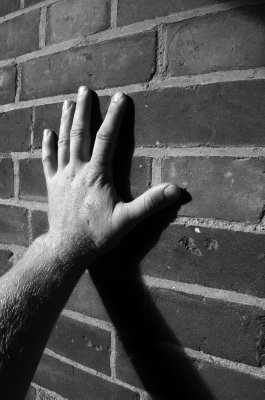 I walked through the building one Sunday morning with a friend of mine. The light was good, and the shadows were interesting. The building was made of tons of brick and mortor, and i wondered how well it could stand here in the land of earth quakes. 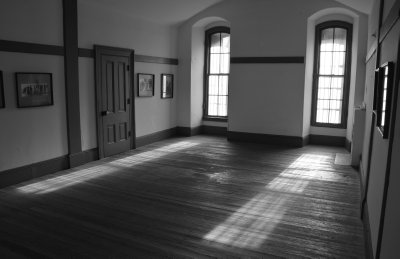 The buidling holds one of the best hallways one can find. I wish i had come here with five other friends to lead a trail of the "dead." We made the best of it however and with a little help from a well placed shelf were able to get the shot we've always wanted here. In truth, I didn't know this shot existed, until i saw it. 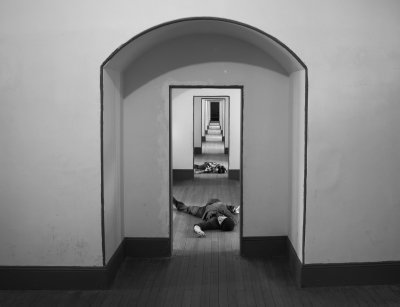 A Morning In the Davis Mountains

I was driving around the southern end of the Davis Mountains a little southwest of Ft. Davis, Texas when a gigantic collection of boulders caught my eye. I love boulders. I especially love enormous boulders that have been piled up in a chaotic jumble. Jumbled boulders make for a good morning’s entertainment.

My approach to these boulders was just like my approach to any natural area or park; I like to start by walking around the outskirts of the rocks, feeling them, jumping on them, climbing them, and getting a feel for the place. I let my senses take control taking in the scenes around me. It was sunny, but not too hot yet. The rocks were were rough offering a good grip, and I had no problems scaling them in sandals. The air was desert clean, and smelled of rock dust. There wasn’t much of a breeze. I could hear the everyday trills of songbirds foraging in the trees. I liked the look of the picnic tables hidden in the deep shade of the oaks, and knew I’d be eating lunch there in the near future.

Often, questions come to mind during my first approach, which often piques my curiosity. Are the rocks sharp? Are there climbing holds? Do I need my rock shoes, or is it better to scramble up in hiking boots? How did these rocks get here? What‘s the best line to traverse that one? As I wondered about this place, I started to climb up on the first boulder barrier, my key to the place. 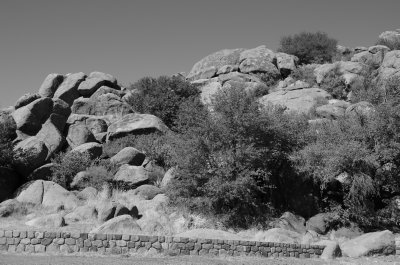 The Boulder Field
The boulder field I was entering was a large one. Picture a “C” shaped, long row of oddly shaped car to house size boulders that stretches 600 yards long (that is two American football fields long). The “C” is the base of the south end of a mount that rises above to the north perhaps 150 yards away, and much higher than where I am standing at the base. Between the apex of the mount and where I am is a slope of boulder piled atop one another. They are standing side by side, stacked atop one another, crammed together and thrown together in complete mayhem.

My initial goal was to climb up to the top of the mount. I didn’t really know how to get there, but I started climbing up on one of the rocks, leaped across a crevice to another rock, and was on my way. The rock had a good grip to it, and I started up in my sandals. I had packed my rock climbing shoes in my pack in case I needed them. 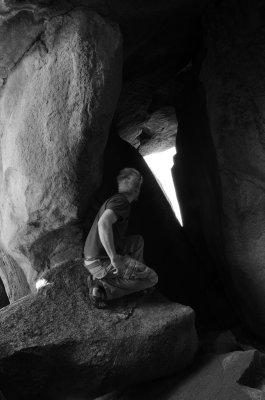 The Entrance
I made it about a third of the way up and I crawled into a narrow crevice on top of a car-sized boulder that had a huge house sized boulder stacked on top of it. Due to the angles of the balanced rock, the crevice opened up to a decent sized cave. I stopped to get a drink of water, and check out the cave. There was a narrow slot that looked like it might lead back to daylight, and I stopped to set up a picture. I was thinking about a photo chronicle of my exploration of the boulders, but hadn’t yet made up my mind. 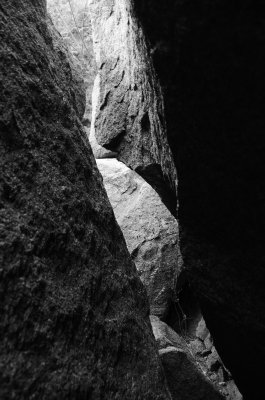 Beautiful Lighting of the Slot
I worked my way into the narrow slot, and it led back around a rock about twenty feet. I turned back and saw the beautiful reflected light of a narrow slot under the earth. I set up another photo, capturing the low-level light and rock. As I was about to leave, I looked up and saw a small opening in the passage that looked like it was big enough to climb through. 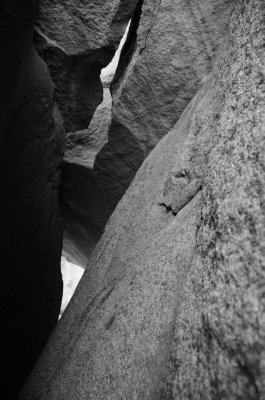 The Ceiling Slot
“I wonder if I can get up there?” I thought to myself, and I just HAD to find out. Incidentally, that is my favorite question I often ask myself. Though the answer is a simple yes or no, I find that the challenge of trying to answer the question much more fun than the actual answer itself. 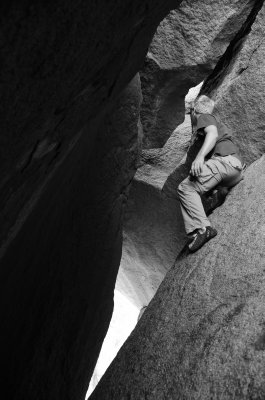 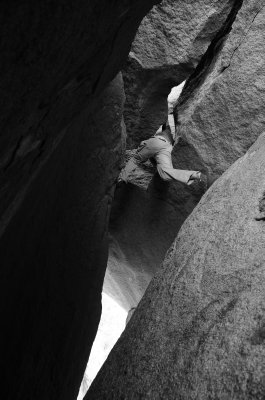 Investigating The Ceiling Opening
I took off my sandals and put on my rock shoes. I tested the slope of the rock, and jammed my way up to the opening, as you would climb a chimney. I used opposite forces with my butt, my arms and legs to elevate myself up the sides of the slot. I found the opening small, but maneuverable and there was enough of a foothold to allow me to wedge my body into it. I looked up through the crack and saw the next pitch of the climb to be another twenty feet or so with more chimney work to get up to the exit. All told, from the bottom of the slot up to the top was about a forty-five foot climb. I had made up my mind. I would climb this crack, and document the moves and see if I could make a compelling documentary in the process.

I had left my gear down at the bottom of the slot, and began to earnestly think how I would get the shots I wanted to show the climb. The hard part would be where to place the tripod, especially once I made it through the ceiling opening. I climbed back down, stowed all of my gear back into my backpack, and began to chimney my way back up to the slot. I pushed my bag through first and onto a narrow shelf before I made my way through. 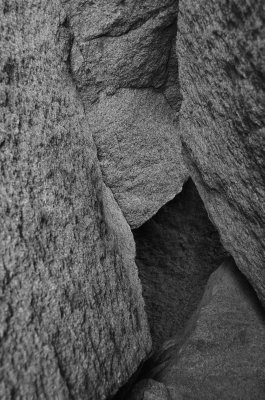 Looking Down at the Ceiling Opening 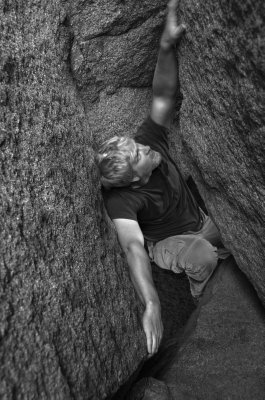 Climbing Through the Ceiling
Once inside, and through the opening, I pulled out my camera to figure out where I wanted the angle for the shot. Once that was decided, the hard part was getting the tripod to adjust for that exact location. I was setting my camera up on a tripod that was clinging to the narrowest of rock nubbins. I really really hoped my tripod would not slip, because if it did, I doubt I would have been able to save my new camera gear from a 25-foot crash onto the hard rock below. 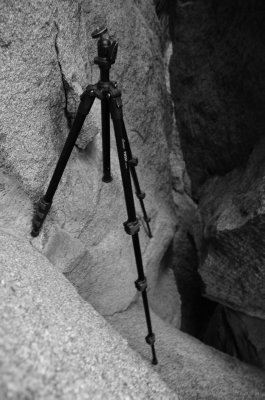 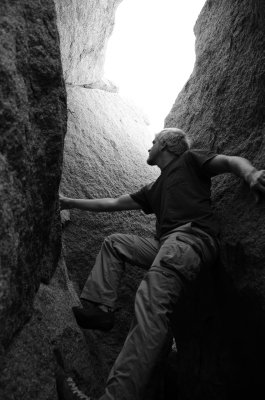 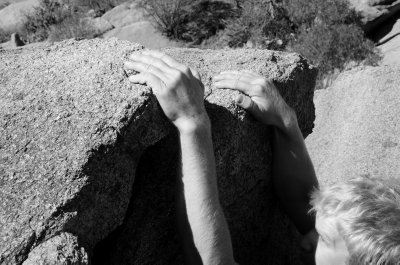 The Final Grab
I only had one more face to climb, and it was more chimney work. I wedged my body in, and worked my way across a fifteen foot gap. Far below me was the bottom of the original slot. Above me, lay the bright desert sky of west Texas. I jammed my feet into a narrow crack and reached up to grab the lip of the rock. With two easy moves, I was up and out. I was a lot higher than when I started, and the long desert views were well earned. I sipped some water, and was completely satisfied with my efforts. 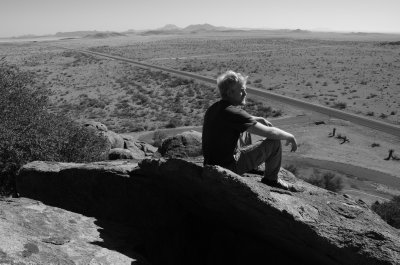 I never did get to the summit that I had set out to reach, but I did answer my favorite question once again.

Yes, you can get up there.