We docked the boat at about seven in the evening on a huge pier just north of downtown Seattle. Our entrance to Seattle was a pleasant one. I was sipping tea, chatting with my friend Bill-who is from Seattle, and he was proudly telling me about his town. We leaned on the rail of the ship, sipping and watching the anchored cargo ships, and the downtown area come closer into view. I believe the rails of most ships are designed for deckhands to lean on. It’s a good, comfortable leaning spot, and no matter where you are in the world, you can see deckhands leaning on rails, watching the world go by.

Almost the entire crew came out for the event, excited to be able to walk on solid ground again, after six days at sea. The captain did his thing, and we linesmen did ours. It was a smooth landing.

When the gangway was set in place, the crew eagerly bounded down it to walk on the cold concrete of the pier, some disappearing into the depths of the city some three miles distant. I was expecting to go to work, but the chief mate asked me if I had plans, and that I could begin my shift two hours later than I had figured.

With unexpected time on my hands, I found a couple of my friends who were going for a jog, and told them to wait for me. I threw on what I guessed were suitable jogging clothes, put on my dilapidated, unsupportive footwear I call sneakers and joined them. We happily and energetically ran around, hopping over concrete barriers and chatting amiably. It felt damn good to be free of the confines of our 152-foot world.

I watched this huge factory ship dock in the night. It's bow is taller than the top of our bridge deck. 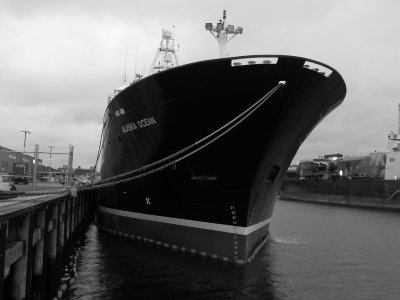 We ran downtown along a shoreline asphalt trail. The darkness of early night was closing in, but we didn’t care. When we reached the city, we walked up on of the seven hills on which Seattle was built. We continued downtown to Pikes Place Market for a cup of coffee before returning to the shift. It was a good run, and in good company. I’m not a runner, and I knew my feet were going to feel sore the next day after the pounding I gave them. I didn’t care. It was worth it. 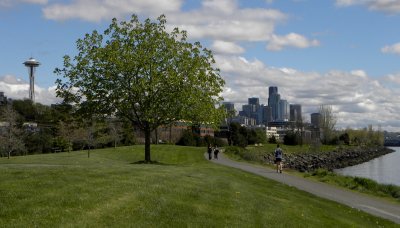 The next day, I awoke, threw on some clothes and walked back into downtown for a little adventure of my own. The day was full of signs of spring. There were large areas of fresh green grass with dandelions and daisies bobbing around in the breeze. The trees were budding, and little songbirds were perched high in them attempting to seduce one another with song. The skies were blue with occasional cloudy patches bringing in drizzle. It was warm enough for a tee shirt, then cold enough for a jacket, all in five minutes. I can’t begin to tell you how amazing it was to see a colorful landscape after five months in a desert. 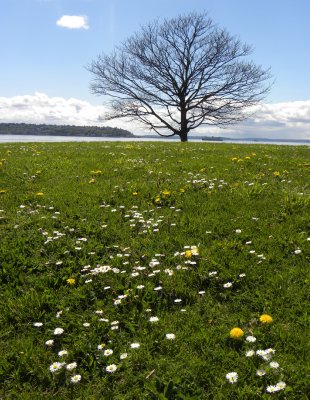 I love walking in cities, exploring through the hustle and bustle that residents take for granted.

I like looking at the little vignettes of city life: A woman cuddles into her man as he kisses her on the cheek. A pigeon lands briefly on a baby carriage (is this the right term anymore?) the bird and baby eye each other peacefully before the bird flew off. A man walks by me eating a cinnamon roll, and refusing to make eye contact with me. That’s the way of the city, nobody will look at you. I looked at everybody. I saw two elderly sisters standing the same way, walking the same, looking at their goal across the street; that being Macy’s. A young man looking street smart and hip waits for a bus while listening to his Ipod.

I was enthralled with the simple joys of a city after six months at sea.

I went on a sailor’s spree. I’ve a bit of money saved up for my toil and labor this winter. I didn’t spend much money down in Mexico. My nest egg is now full enough to spend at will (I realize that I probably gave the financially wise populace a heart attack). I’m boat rich; Easy come, easy go.

With nobody to keep me in check, I purchased a cinnamon roll, and a good cup of coffee ($3), some toiletries I needed ($30), an Ipod (my first, and I STILL can’t download itunes which makes it basically worthless)($160), I went into the map store on 1st Avenue and immediately bought two books I’ve been wanting to read. “The Natural Navigator” by Tristan Gooley and “As Told At The Explorers Club”($30). This particular store is very charming and very dangerous. I didn’t stay long, as I knew my weakness for maps. I finished off my day by going down to Pike Place Chowder for a bowl of chowder ($7) and getting one for the road ($7). Pikes Place Chowder is a very good bowl of chowder. In my opinion, there’s only one place on the west coast that makes a better bowl. I was satisfied with my efforts for the day, and walked back to the ship in good spirits.

The next day we sailed north into Canada and British Columbia. The first sunset of Canada was a memorable one. It was one that a picture can’t really do justice to, though I tried. To be in that moment, in that scene, was to be immersed in grandeur. I love being surrounded by glowing clouds and seascapes. There were only four of us who witnessed it, even after we told everyone to come and take it in. The fools, their noses were glued like mine is right now to their computers. 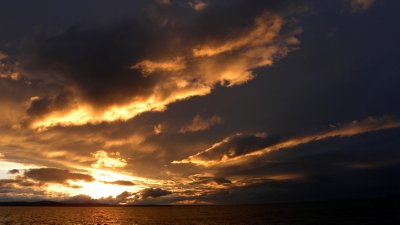 For those of us who watched the evening unfold, it was a symphony in the sky, and a well composed one at that. The clouds were its greatest feature, lit up in colors I hadn’t known existed by the setting sun. It was one to remember, and I’ll do my best to do so. 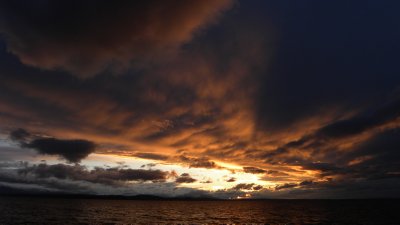 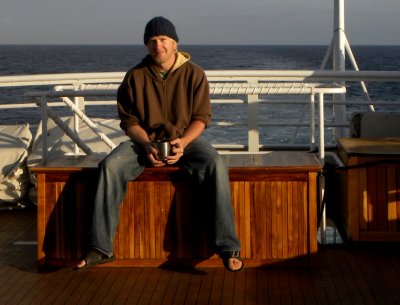 I really like this post; the word pictures of people you observed, a happy reunion with land and a Thom typical jump on whatever life is happening (an impromptu run). I enjoy and definitely relate to the boat rich spending confession too! oi vey, so easy. I've been considering the purchase of an ipod myself. Why can't you download?
And I very much enjoy your short and to the point comment of an end with appropriate pic. I'm looking forward to catching up with you next week!