Utah By The Sea: Punta Colorado and Boca la Soledad: The Gem of Magdalena

Utah By The Sea 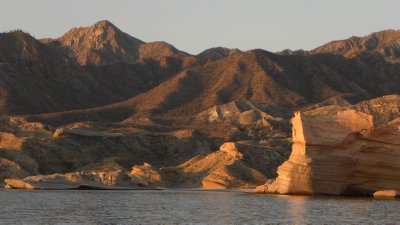 I was leaning on a rail on the stern of the ship looking at our destination with mix of excitement and fatigue. I had been up for 17 hours, having worked the night shift, and I was tired. My eyes felt like they had been sand burned on the backside of them and squeezed in a vice. However, I was looking at one of the more compelling landscapes I had seen here on the Baja Peninsula, and I was catching my 4th wind of the night. My day was definitely looking up. 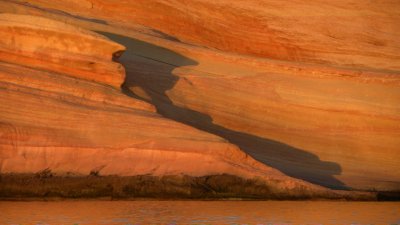 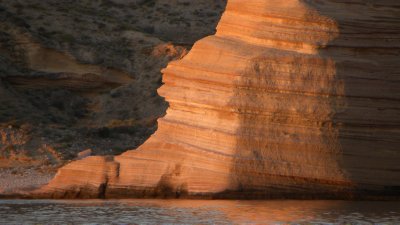 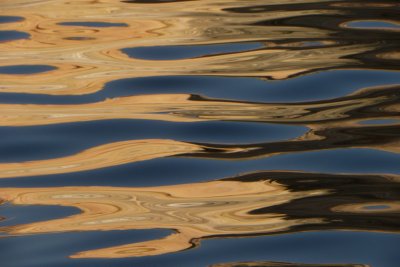 When seven o’clock hit, I gave my partner a high five, signaling the end of my day, and I headed directly to my room to get ready for my adventure. I was ready to go in seconds, donning my quick dry tan shorts (which are see through when you get them wet, thanks, morons) an adventure shirt and my day pack. I went back upstairs and our boatswain (bo’sun) was ready to give me a ride to the beach, an hour earlier than anybody else.

This is one advantage of being a deckhand for this company: if you plan ahead and have your things together, you can find yourself all alone on a beautiful desert island taking in the early warm sunlight glinting off of the water. And that’s where I found myself on this morning.

I was dropped off a mile away from the ship, around a huge rock ampitheater and past several jutting rock fingers, and on a beautiful soft sand beach. As the zodiac motored away in the distance, I took stock of my surroundings. I had options, I could hang out by the beach and scramble around on the ledges and boulders as I made my way to my pick up location. Or I could hike up into the high country, following an arroyo far up into the mountains. I chose the former, because this beach was too irresistible. The sandstone rock ledges that jutted into the sea were too intriguing to pass up. I wanted to dive in from the rock. I love diving, though not from any height. I love the all or nothing feel of it. To fly, even briefly in a perfect arrow into cool refreshing clear water is a pastime I hope I never tire of. There is a moment in mid-flight when I wonder what the water temperature will be. It’s far too late to change course, and my destiny has already been sealed, but I like the fact I think of these things after it’s too late to change my momentum.

Punta Colorado is located on the northeast corner of Isla San Jose in the Sea of Cortez just off the east coast of Baja California Sur. It reminds me a lot of southeast Utah, where the red sandstone cliffs form cool rock statues and walls. The only difference is, Punta Colorado has an ocean at the base of its gorgeous cliffs. 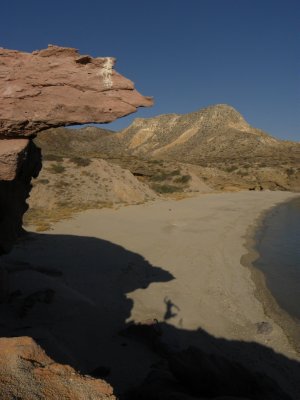 It was hot. I shed my shirt, and hiked around in shorts, sandals and sun hat. I climbed down to a secluded sand beach and rolled around in the cool, rolling surf. I let the swell throw me around, rolling on my back and stomach right next to shore. It was so refreshing. I continued along, climbing on a rock shelf tip and took in the scene. The mountains dropped down to the sea. Rocky fingers led my eye to distant islands, and the sea was aqua-marine (of course) and crystal clear. I watched schools of fish swim around the submerged rocks. I drank some water, smiled, and looked for a suitable diving spot. 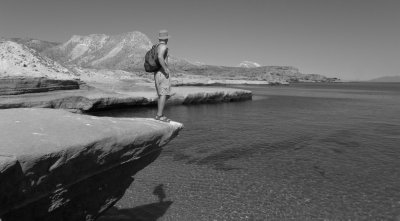 I set up my camera on my tripod, and tried timing some jumps. After seven tries, I still didn’t time out a perfect mid air dive, but I had fun trying. I finally gave up and just swam around. The day was glorious, and I seized it with all I had left. 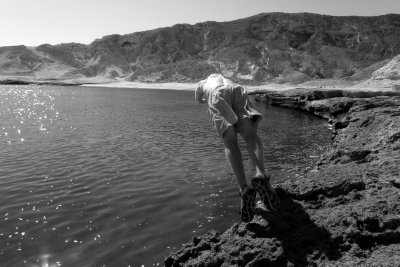 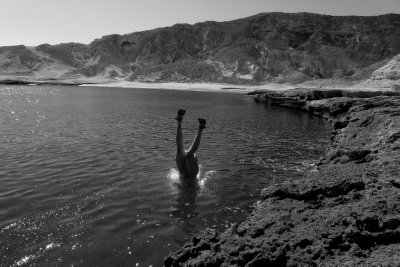 The Final Footprints on Isla Magdalena

The ship was anchored near the Boca la Soledad at the extreme northern tip of the south island that makes up Isla Magdalena. Isla Magdalena is actually two separate long and skinny barrier islands that protect Magdalena Bay. A narrow and turbulent body of water separates the two islands and this entrance is called the Boca la Soledad. There are strong currents here where water from the bay flows out, and meets the rolling surf of the Pacific Ocean.

It was a cold day. The wind had been blowing hard for three days straight, and it reminded me of fall. If I was still in the states, I would’ve considered the weather almost summer like, but I was used to the summery weather of winter in Baja, and not ready to be cold yet.

I walked north along the shore into a grove of dead mangrove stumps. The bent and twisted trunks were bleached white with the constant sun and were sand blasted by the wind and sand. I switched to black and white and set down to capture some appealing scenes. This mangrove graveyard was very cool, the warped stumps and branches worked well with the patterned clouds in the sky. 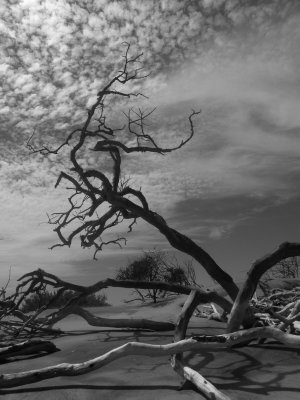 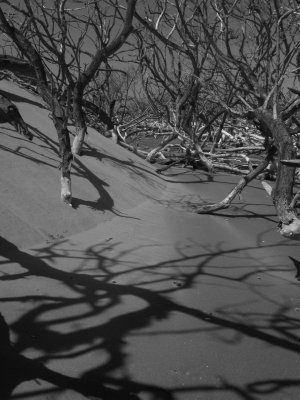 I crawled through the mangroves and back to the beach. It was covered in a wide variety of appealing shells. The surf kept rolling high up on shore as a very thin carpet of sea water tumbling the thin shells around before letting them lie once again. I’m turning into a shell fanatic. I love looking for interesting designs and colors that I haven’t seen before, and I think they are quite beautiful. I enjoyed picking up some of the shiny pearled ones with intricate designs on them. I’m a bit like a raven, I suppose. “Oooh! Something shiny!”

The hard packed sand near the water was ruffled and patterned from the retreating surf. It was like the ocean was making a sand painting, blending black and brown in an elegant display of natural art.

The sky added its own design to the scene. It was beautiful azure blue, and a wide set of small puffy popcorn ball clouds floated along directly overhead. The contrast was magnificent, especially combined with the dynamic sand painting in front of me. 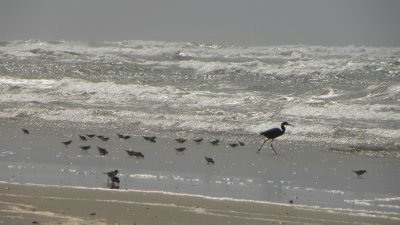 The strong currents of the sea caused the breaking waves to curl ashore in a power display of water. I watched a little blue heron look for its lunch in the shallow surf. It’s long twig like legs look like they might snap at any minute, but it held its own as the water surged around it. A flock of sanderlings ran out in the retreating surf to eat, and before the next wave would arrive, they would sprint back toward shore. They never were caught by the water, and I was impressed by their speed.

That was where I spent my afternoon, simply amazed at this magnificent landscape before me. I have a good sense of my landscapes, and some of them “speak “ to me more than others. I find myself hyper-sensitive to the subtleties of the scene, and I am truly living in the moment. 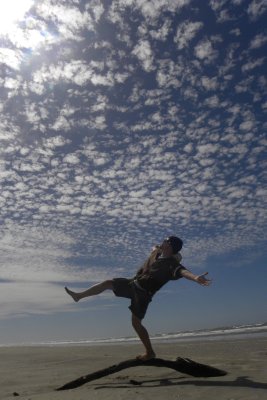 I set my camera down and sat down in the sand to take it all in. I breathed deeply, taking in all I could of the fresh ocean air. I knew I was making my last footprints on Isla Magdalena, and I knew I had made good ones. I didn’t plan it, but I had inadvertently saved the best for last. The Boca la Soledad is an amazing place. It was textural, sensual, and beautiful, and I will take it with me, stored in my memories, my journal, and my photographs.