To Kiss a Whale 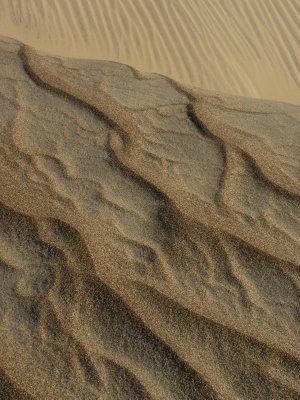 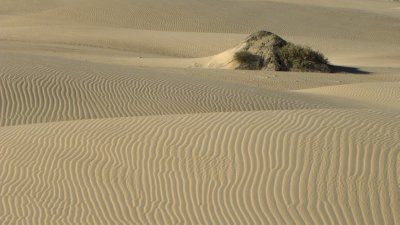 The parallel sand lines were crisp and perfect. They led off into the distance as far as the eye could see over the never ending the sea of dunes. These lines were unblemished, except by that of the paw prints of roving coyotes. To be fair, my own yeti like footprints marred the surface of the dunes as well. I try to walk a path of little impact- trying not to wreck the more beautiful sand art pieces nature has patiently etched into the sand with unceasing wind. 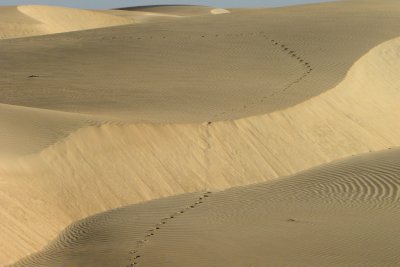 I was admiring the dunes and the delicate sand features found upon them, when I noticed high up on the rise of a dune a coyote scanning the horizon. I saw it before it saw me, and the wind was blowing my scent away from it. I crouched down, and swung my camera out, and started shooting. As luck would have it, it didn’t run away. Instead, it seemed curious and comfortable with the distance between us. 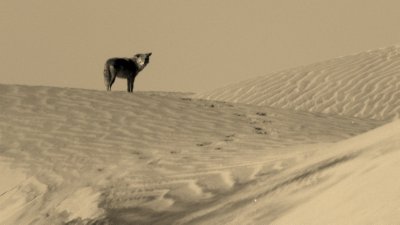 I crouched behind the dune I was on, and keeping hidden from view, I circled around and higher up on the dune I was on. Then I popped up slowly, more not to startle it, and found a better composition than my quick attempts. It still hadn’t really moved, and had sat down, obviously enjoying my amateur “sneaking” attempts, and taking notes to tell his buddies later. It wasn’t long before it became bored with me, and moved on, trotting west into the lumpy bumps of sand that separate the dunes from the western beach of Isla Magdalena. 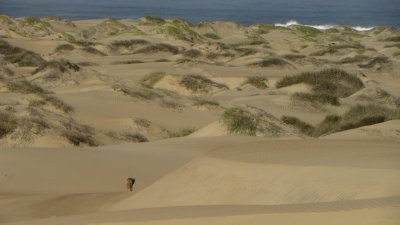 Later that night I heard the long lonely howls of several coyotes coming from the dunes, and I smiled.

My friend Kathy, who is the BIGGEST fan of whales you’ve ever seen or heard about, started pounding on my door one morning as we were sailing south towards the tip of the peninsula. “Whales, Thom! They are breeching, and fin slapping the water right outside of the boat! Come on, come on, come on, I want you to seeeeeeee.” She said, while hopping around my room shaking me. Kathy tends to get excited when there are whales around. As the whales get more animated, so does Kathy, and it is hilarious.

One afternoon, the entire crew was sitting down eating lunch in the dining room when Kathy detonated a sonic boom of a scream. When we recovered from the initial concussion of the blast, we looked to see her pointing out the window as she bolted out of the room to the fantail of the ship. All of us thought she cut off her finger, witnessed a horrible tragedy, or saw one of the Beatles, but when she came back, she sheepishly informed us that she say a baby whale breeching. Then she started laughing hysterically about her amazing scream, and when Kathy laughs hard, you can’t help but laugh right along with her. The whole room was laughing, and it was a great moment. Long live Kathy Miller and whales. 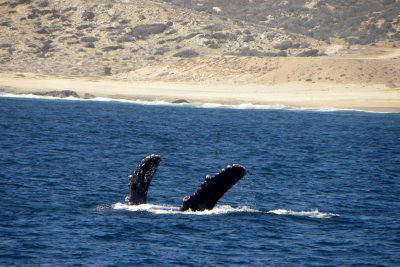 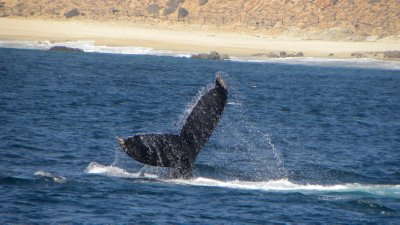 When I came upstairs and saw the mother and calf humpbacks pectoral slapping, and breeching, I grabbed my camera, and headed out on deck. The whales were only a couple of hundred feet off our portside, and to me it looked like they were playing a game of follow the leader. One would roll on its back, and begin slapping the water with their extremely long pectoral fins. Humpbacks have the longest pectoral fins of any of the whales, and they stretch out to near 20 feet in length for an adult. After mom would roll, the calf would roll, and do the same thing. Then the calf would dive down showing its characteristic tail fluke as it dove. Then mom would dive, and it would be a few seconds before they both launched themselves skyward breaking the surface of the water and into the air in an amazing display of power. 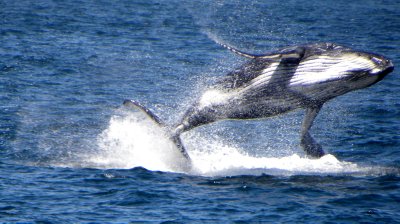 The calf was completely airborne. To see a whale launch itself like a surface to air missile is awesome. Emphasis on AWE. To see the size of the splash when they land into the water makes me feel like my half ass “cannonballs” into a pool seem pathetic. 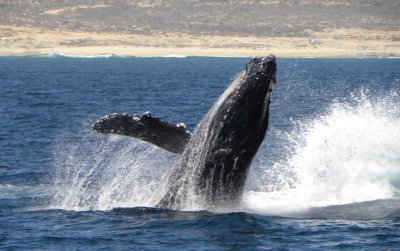 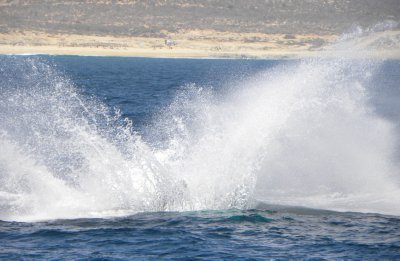 The whales didn’t do this just once; we spent the better part of an hour watching them play. It was a terrific way to start the day. I shot over 80 pictures, most of them I deemed exceedingly crappy, but I did get collect a few gems. If you missed the shot today, you might as well have set down your camera for good. It was that easy to get a fantastic shot.

My friend Ame woke me after only 5 hours of sleep, informing my clouded mind that I should get up and come on a whale watching tour. I mumbled something about door locks, and said thanks. She let me be. I immediately went into the time honored bargaining session I hold with myself every time I have to wake up earlier than I want to. “They’re probably not any whales out today anyway, and you are dead tired. Wouldn’t you just rather sleep here in this comfortable bed? You can go next time. It’s probably cold out, and man, you sure are comfortable.” I happily talked myself out of going. As I shut my eyes and was about to walk into dream land again, there was another knock on the door.

I decided against my better judgment to open it. My buddy Paul was there, telling me there was a whale tour leaving in a few minutes. I asked him how many minutes I had, and he said just a few. I told him I was going, and jumped out of bed, put in my contacts, put on my comfortable jeans over my shorts, grabbed my toque (my warm winter hat), and was out the door in about 2 minutes. I’m not sure why I changed my mind, but I think I decided that if my friends are going to put this much effort into getting me to go, that I better go. I have good friends, and I’m damn glad I chose to go.

As we rode south in the bright overcast of a passing cloud bank, I wondered if I made the right decision. I decided to make the best of it, and breathed in the fresh ocean air, and looked out at the peaceful watery scenes all around me. It really was gorgeous out, and I began to enjoy the ride.

We followed a mother and calf pair around for awhile, and since they were on the move, we passed them by. Grays on the move are cool, but we were in search of a pair that wanted to play. We motored towards a pair that looked like they were just hanging out, and when we got close and slowed way down, they indeed came over to check us out.

The mom stayed near the surface and out of reach, keeping a maternal eye on the calf that was having a ball rolling off the side of her, and coming to play with us. It bumped our zodiac’s bow, moving it around like a bow thruster. Then it popped up along side, and after our clients had a chance to touch it, I took my turn.

My first touch of a Gray whale was an opportunistic passing touch that wasn’t fulfilling at all. It left me vaguely disappointed. After all, I didn’t make the connection with the whale. It didn’t really know I was there, and it felt like I stole the touch. But technically, I touched a whale. That thought made me smile, and I got more excited by my chances. I hunkered down on the side of the pontoon, and began splashing at the passing whales, and sure enough the calf came right up the boat, and popped its head out near enough to make a solid touch, and I petted its eggplant like body as it cruised by.

That was really cool. The scene was beautiful. I saw the mother’s humongous eye just underneath the surface of the water as it came up to breathe. It was a huge whale, an adult gray grows to a length just over 50 feet, and has a mass of over 35 Tons. To see one up close is awesome. Everyone onboard our zodiacs were very happy, and moved by the experience. There were many smiles, and a feeling of peace fell over all of us.

I was already satisfied with touching one. I am very easy going, and make no demands of what I can’t control. Some days the ocean will provide you with its bounty, and some days it won’t. The nearby zodiacs were leaving, and I made sign language with Ame who was onboard that one. We both had made the connection and we were both smiling. Her boat motored off, and everyone on my boat was watching the mom on the far side of the boat. Just then, the calf popped up right next to me, spy hopping high out of the water. I didn’t even think, I just reacted, bowing my head maybe 8 inches and I kissed that whale right on its head. It was a good kiss. I didn’t French kiss it, like my friend Taylor did, and it wasn’t a peck on the cheek, it was not too long, and not too short, in a word: perfect. It was like kissing a salty eggplant. My friend Ame saw it all and screamed, “Thom Kissed a Whale” to which she received some confused looks on her boat. She told me that immediately after I kissed it, I raised my arm in triumph, like I had just kissed the prettiest girl in the world. I don’t remember that, but I don’t doubt it. Whenever I kiss pretty girls, I like to celebrate a little, who doesn’t?

The most charming moment was when we had to return to the ship. The whales started swimming after us, trying to get us to stop and play for while longer. I don’t think it was mere coincidence, I think these whales wanted to stay with us. It was cute, and a friendly gesture. It was really hard to want to leave them, after such a moving experience.

I was surprised at how moved I was by the experience. I still smile at the thought of it. To touch and to actually kiss a whale is one of the highlights of my life. It seems like I say that a lot these days, but it’s true. The Baja Peninsula has a lot of magical qualities to it, and to experience these moments has made my life a little better with each one.

I am really liking that you equate pretty girls with pretty whales. I honestly do. And I love the Rocky arm lift of triumph.
How amazing was that? Maybe someday I'll do something like that, too.

What kissing pretty girls?? It's great! I highly recommend it! It's good for the body and soul... :-D