On Knot Tying, Practical and Fancywork, and Sailing Through Stormy Seas

The captain sugarcoated the weather report as sweetly as he could: “Well, It’s going to be shitty, and the next day is going to be worse.” The captain has a way with words all his own. The report called for sustained winds of forty knots out of the north/north east, the direction we were heading directly into.

We knew it was coming, we knew we HAD to go through it (there was no protection to hide in), and we knew it was going to be rough. We prepared for war, lashing and tying down everything we could, so we wouldn’t lose anything. I really enjoy this part of my job. As a deckhand, it’s my duty to secure everything and make sure we don’t lose anything overboard in heavy seas. It’s a great opportunity to practice the ancient and practical seafarer’s skill of tying knots.

Tying knots is a great skill to have, and a sailor’s dependence on that ability is probably greater than any other occupation. This was probably truer in the days of clipper ships, and three mast schooners, but is still applicable today. The practice of tying knots is a language and an art form all its own. While I’ve always had an interest in knots, I didn’t really start tying good knots until I became a deckhand.
Clove Hitch, Daisey Chain and Modified True Lover's Knot -Tied By the Author 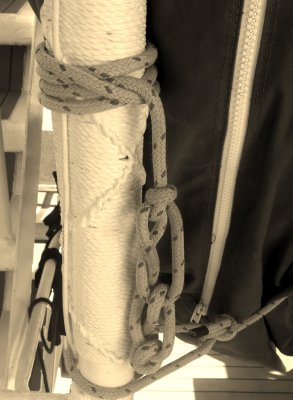 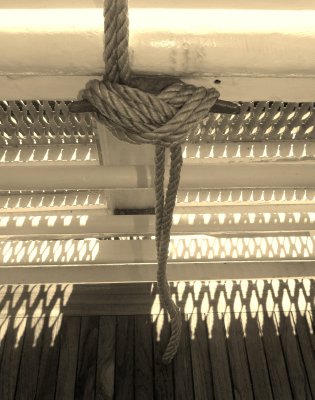 In truth, there are really only about seven knots I use on a daily basis. On my breaks, I’ve been perusing through the “knot bible”, that is, The Ashley Book of Knots by Clifford Ashley, to try to learn more. I’ve found I really enjoy thumbing through Ashley’s book until I find a knot that looks interesting. I’ll grab my line, and attempt to follow the diagrams to tie it. Ashley’s book is filled with diagrams and sketches for thousands of knots. He gives a brief description of the knot, what it’s used for, and where it originated, if it’s known. It’s a very interesting book. If I ever have a home again, this book will be on my shelf.
Fancy Work - Monkey's Fist, Plaited Sennit -Knots by Sheryl Bale 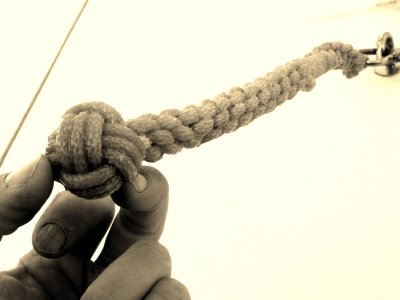 To be sure, the diagrams aren’t that easy to follow, and the text font is in clearly from the 1940’s but that‘s its charm; it‘s old fashioned. Knot tying isn’t easy, and it takes a lot of practice to get it right. Following the diagrams in this book can be very frustrating, like following a single line of spaghetti on full plate of pasta. Tying knots is akin to any learned skill. For the common man, it takes patience and practice. The results of your hard work can be beautifully decorative knots in sequence, or simply the satisfaction of tying the correct knot for the job you are working on. It’s funny to say, but tying a good knot makes me feel proud, and definitely more manly. You might see me beat my chest like an upland gorilla, roaring with pleasure after tying a good knot.

Check out www.animated-knots.com this is a good online source for learning knots.

The storm was all it was predicted to be, and a little bit more. We left San Jose del Cabo at about noon, and started the trip north. The wind had picked up, and the seas were building. The odd part of storms down here was that the sun was shining bright, and the sky was deep blue. It was beautiful. When I picture heading into a storm, I think of big brooding clouds and lashing rain or what have you. It was strange to see blue skies and sun. 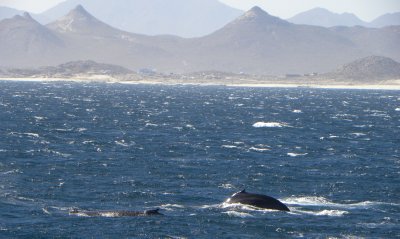 We watched a pod of humpback whales frolic in the water for about an hour before we turned into the brunt of it and started the long slog north. It was kind of exciting, like the beginning of a road trip into the unknown. The crew came together for our evening meal, bantering and friendly as the big dysfunctional family we are. We watched the waves sweep by the windows, and wondered what the night would hold. My friend Ame and I stepped out on the aft portion of our boat to watch a glorious sunset over the Sierra de la Giganta mountain range. It was the last light of peace we were to have for 12 hours. 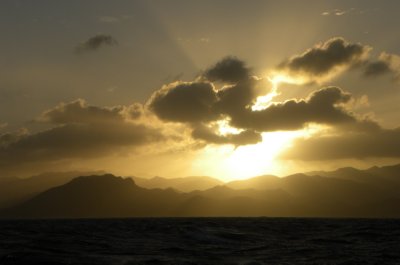 In adversity, you find out a lot about yourself. I learned something that I had suspected: I don’t suffer from seasickness. To be sure, the ship was pitching bow to stern; this is an easier motion to handle than a swaying motion (a side to side motion) of a ship. I felt fortunate, as a lot of our guests and crew suffered through a very long night. I was sitting in the crew lounge, chewing the fat with the chief engineer when my deck partner walked in and noticed streaks of vomit on the window behind me. That was kind of the theme of the night.

I have a twisted point of view on seasickness. I find it hilarious. When everyone around you is puking, it always makes me laugh. We all vomit in our own special way. Some people sound like sea lions, some hack and strain only to produce a tiny ball of bile, others make a long drawn out gurgling sound. I like the people who try to vomit with dignity. Ha! It’s like trying to quiet down a freight train. I wasn’t there to see it, but up in the pilothouse the watch officer and two of the on duty deckhands all started puking at the same time. In between bouts, they realized how funny the situation was, and started laughing their asses off. Had I been there, I’d have done the same.

Working in this storm, was also the most fun I’ve ever had as a deckhand. The captain tasked us with making some final securing measures up on the bow, and lido deck (the lido deck is where we store our zodiac inflatable boats, kayaks, and crane). He told us to put on clothes that can get soaked, and to work in pairs. We geared up, and headed out to the bow. The boat was pitching steeply as we pounded our way up and down the big swells. Our momentum caused us to jog a little along the decks as we made our way up to the bow.

I felt exhilarated, and got a little bump of adrenaline as big walls of white spray flew over the bow and soaked us in salt water. It felt great, and I was drenched in water, except for my underwear, which I was somewhat proud of. We worked in tandem, and secured the last of our loose items. We were all whooping, and hollering as the big waves washed us down again and again. It was awesome! I love being out in the elements, especially potentially dangerous ones. It makes me feel jubilant, at one with the world, and damn glad to be alive.

The night became one task after another. I waltzed a 94-year-old woman down from her cabin to the dining room for dinner. She was a real trooper that one. I helped the engineer close all the vent covers outside on the upper deck. I made my engine rounds. I eventually ended my shift, and hung out for a while in the crew lounge. I contemplated if I wanted to have a cold beer after such a day, but decided against it.

At about 9 pm, I went to bed, and didn’t sleep that well. I was comfortable in my bunk, but there are many things that go bump in the night on a heaving ship. The seas got even bigger around 3:30 am, and I felt my stomach drop out as we went straight down a massive wave. I sleep in the aft of the ship, towards the back. Usually this is the most stable part of the boat, and to feel your stomach drop out from back there, there must have been some good waves. So I had a fitful night lost somewhere between awake and sleep.

At 6 am, we at last reached our destination, Ensenada Grande on the west side of Isla Partida. We were happy to set the anchor in the relatively calm water, finally out of the punishing swells. When I started my shift at seven, I took stock of the whole ship, and decided we faired very well. Nobody was hurt, and only a couple of minor items had been forgotten in our securing tasks.

The whole ship seemed like it was in a hangover. Everyone was quiet and subdued. We were all tired, fatigued from our personal battles of the night, and mostly due to lack of sleep. Even my deck partner Paully, who is usually a bundle of hilarious, manic energy, was quiet and laid back. Everyone compared their stories of the night, and I really didn’t have much to say or to complain about. I was fine, though a little tired. It was nothing a good double shot Americano couldn’t fix.

We spent the whole day in that cove, relishing the beautiful views and calm seas once again with a newfound appreciation for peace.

are there any female deck hands? or do you think the physical parts would be too much? (i realize i sound sexist to my kind, but i am only speaking from my own experiences as a wimp)
how do you know which know to use when?

So your immunity to sea sickness still prevails! Your story made me think of our trip back from Isle Royale and all those poor folks throwing up in the rear cabin.

Ann. there are female deckhands, and I'm glad and proud to work with one of the best. A lot of the work is physical, but not to the point where only men can do it. We are all here to help each other if the job demands it.

Concerning knots. Experience is the best teacher. Mostly it depends on the task at hand. Some knots are very specific, such as the highwayman's hitch (used to tie a heaving line to a mooring line). For other tasks there might be 8 different knots you could use, but it depends on your knowledge, the strength of the knot, ease of untying, and how fast you need to get the job done.

Pete. I remember that trip fondly. I keep trying to judge those seas compared to what I face now. I remember our ridiculous rummy game we attempted, and the look on your face while you held the trash can while that poor woman puked into it. The smell of vomit, and the roller coaster that lasted 5 hours. That was a great trip. I look forward to our future adventures, and getting young Toby involved...

Thanks to both of you for reading!

I think it's hilarious that Theresa was concerned that you get seasick, with no other justification for it than that you were associated with me, and it's my brothers who get sick. Congrats on handling the storm so well.

True. I was guilty by association. We both are aware of Theresa's "notions" about things however, and I'm glad i proved myself worthy of being a sailor.