Looking Closer At What Makes Up This Great Peninsula 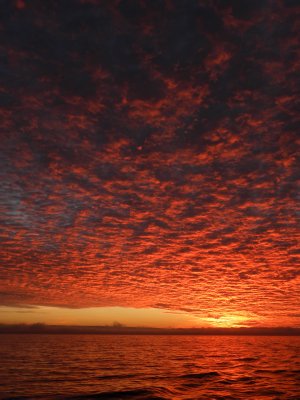 About an hour before the sun cracked the horizon, I could tell the sunrise was going to be spectacular. In the low light, the high clouds were the first to catch the early light. The southeastern sky had a lot going for it, meteorologically speaking. For one thing, the low bank of fog hung over the sea. It was several miles away, and it obscured the land behind its opaque shroud. The clouds above us had set up in a strong alto-cumulus pattern, like many perfectly spaced layers of popcorn puffs floating along. In my experience, the Alto-cumulus clouds usually yields gorgeous sunrise/sunsets, though I don’t know why. A beautiful harmony between sun and cloud, perhaps? 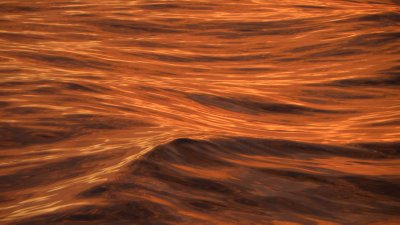 As the sun rose closer and closer to the horizon, the clouds began to glow; first it was golden, then orange, then fiery orange. It was beautiful, ethereal, and moving. The sea was glassy, with a mild swell. It reflected the beautiful orange light, but twisted it in a swirled collage of psychedelic visions. I believe it touched all of us who were out on the aft decks of our ship, though we all respond to earthly beauty in our own way. Most of us had a camera, set to record this scene for ourselves to remember later, and to share with our friends. That’s what I am doing here. Though I am an avid photographer, there are times when I know I should put down my camera. This was one of those times, and I was smart enough to listen to my own advice. Had I kept shooting, I may have had an electronic snapshot of the scene, but would have missed the whole of it completely.

The Rocky Concerto of Isla Danzante. 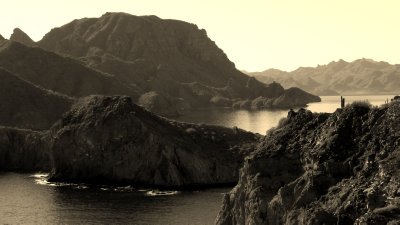 Isla Danzante is by no means a large island, but what it lacks in size, it makes up for in interesting composition of rock. Danzante rolls in rocks; a sonata of rocky composition starting low along the sea, then rising steeply to the jagged peaks and ridges of the high notes. It is an island loved by the turkey vulture. This graceful bird soars along its thermals, gliding and rising easily atop the warm uprising of air current. The vulture makes its home in its high places. In the morning, they can be seen drying their wings atop the tall cardon cactus, that dot the ridge tops. It reminds me of totem toppers of the Pacific Northwest. 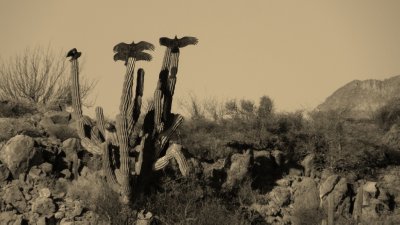 The Birds of San Carlos 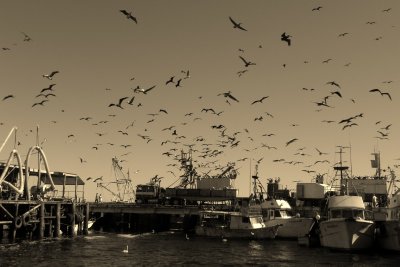 San Carlos is a small town on Bahia Magdalena, which is located on the west side of the southern tip of the Baja Peninsula. At the wharf, the anglers dock to unload their catch, (in this case, sardines), to be shipped to the nearby processing plant. The process of transferring the fish attracts hundreds of birds, mostly pelicans and frigate birds. I’ve never seen such a mass of birds before, a chaotic crescendo of noise and feathers. The birds fly around in seemingly random directions scouring the sea looking for that next tasty morsel. They all vie for a spot on the few level platforms around the conveyor belts, and it’s a wonder why they don’t run into one another. It was hypnotizing to watch the frigate birds make lazy circles high above it all. 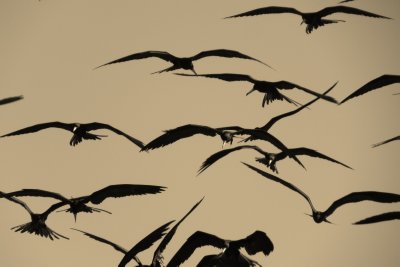 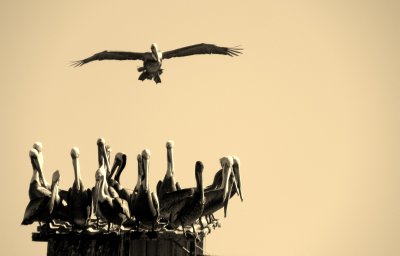 I also wondered how often the wharf workers are crapped on. It’s been said that being shit on by a bird is good luck, but by that reasoning, these people are probably the luckiest people on earth. I wonder if they feel so lucky. I might have a different point of view, if I worked there.

The Dunes of Isla Magdalena. 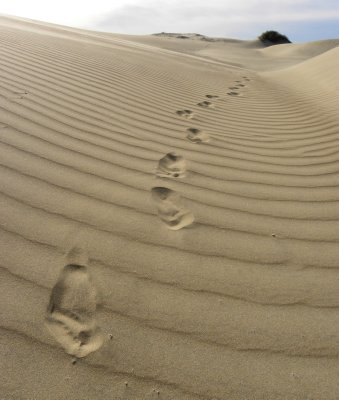 Isla Magdalena is the barrier island that protects Bahia Magdalena from the strong swells and storms of the Pacific Ocean. The island’s features include sand, mangroves, plants that like sand, sand, sand dollars, sand dunes, sandy beaches, and sand. Did I mention the sand? Fortunately, I really like sand, especially when I can find it in mass quantities, and even more so when it starts to form dunes.

The dunes of Magdalena are fun to play around on; running, jumping, cart wheeling (beware of flying sand and wind direction), or what have you. The wind was strong from off of the sea. I walked the dunes, watching the dune lines recreate themselves right before my eyes. The prevailing wind whipped the sand into a scouring force. I was whipped, and sand blasted. Even as I write this, every time I blink, I hear a scraping sound from all the tiny grit in my eyes. 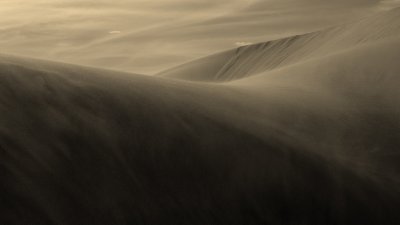 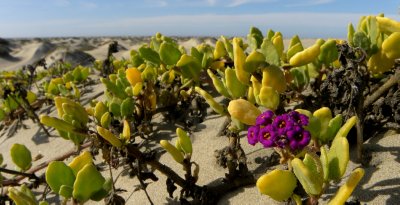 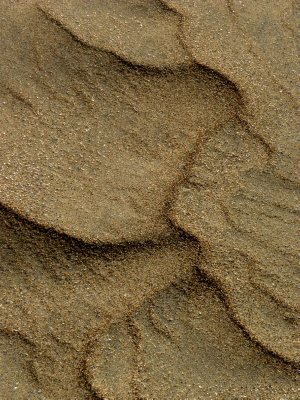 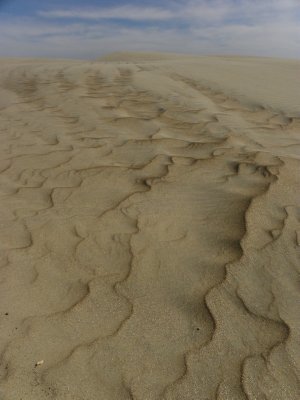 A little sand never hurt anyone, and I had an enjoyable afternoon wandering around the undulating sand piles. There is a lot of beauty to be found on the dunes. To me, sand seems to make its own art out of the delicate lines of the top of the dune, or the weathered brown lines at the bottom. Look at the pattern here. It’s graceful, and perfect. It also mimics the veins of a leaf or the watercourse of a river as seen from up high. Nature it seems, has found a beautiful grand design, and uses it with great success. 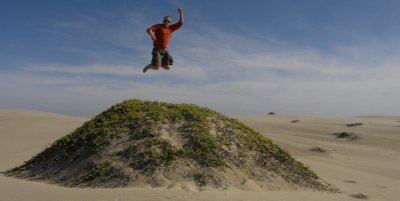 I found small “bumps” of sand, with the top covered in greenery which supported the tiny purple flowers, called sand verbina I enjoyed hamming it up for a few photos; I’m a believer in doing something in a portrait other than just standing there with your arms limp at your sides. I think it makes a better photograph. 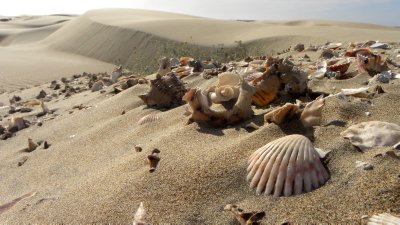 I also found a large graveyard of old seashells, partially buried in section of dune. The bed was about 60 feet long, and filled with a variety of shells, some I’ve never seen before. It made me start thinking about the power of wind, sand and water. Where once the sea flowed, was now covered in sand. 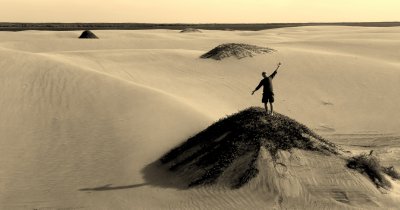 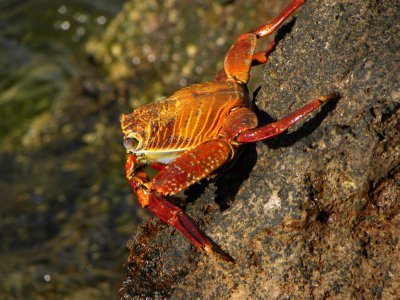 The Sally Lightfoot crab is a gorgeous creature that lives on the rocky outcrops by the sea. Her colors are extremely vibrant a concoction of orange, red, and blue. She’s generally shy by nature, in fact, it’s very hard to get close to her. She keeps her distance well, and doesn’t allow anyone to invade her personal space. She makes an excellent addition to the dynamic and flourishing seaside, and tide pool ecosystems found here along the Gulf of California and the Sea of Cortez. 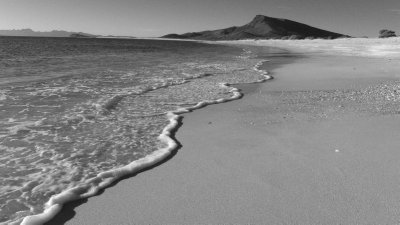 Sometimes a photo comes together without any coaxing from the photographer. I was the first and only person on the beach at Bonanza Bay. While I was planning my hike up into the high country, I glanced around and saw the wonderful foam lines from the smallish surge of water lapping the shore. I settled onto my haunches, waited for the right timing for the foam lines to roll in, and took the picture. These are among my favorite surf pictures I’ve ever taken. Simple, yet effective.

Eight crewmembers from our ship piled into the pang all set to go and find some gray whales to watch. A panga is THE boat of Mexico, and it’s a damn good one. It has a typical rowboat shape, Maybe 20 feet long, shallow draft, fast, sturdy, relatively spacious, and simple to use. If I were going to buy a boat, I’d consider a panga. Our Captain was nice enough to rent us one from a nearby town so we could all get out, enjoy the day, watch some whales, and build some camaraderie. He’s a good man, our captain.

We had an excellent guide, Jimmy, who has been following the whales around Magadalena Bay for many years. He is a great boat handler, and knows how to read a whale’s movement. I think with all his experience, he has a good idea of what a whale is likely to do. As it was, he put us right with them. 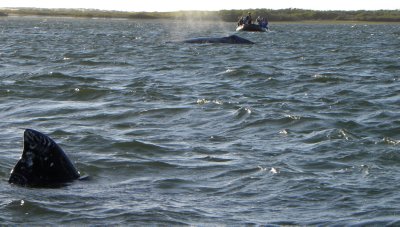 It was amazing. We saw in one small area, five pairs of mother and calves. That’s ten whales in a space about the size of a soccer field. The whales we saw were a major percentage of the entire breeding population in the whole of Magdalena Bay!

The calves were very small, only about a thousand pounds at birth, and the mom’s were still quite protective of them. Later on in the season, as they grow bigger, she will be more tolerant of the calf’s curiosity, and hopefully at that time, I’ll get to touch one. We shall see, it’s all up to the whales. 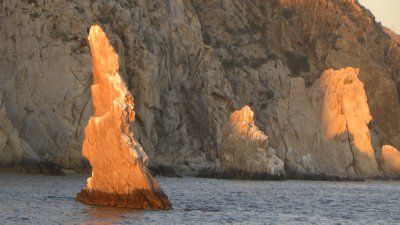 I always wanted a picture of Neptune’s finger. Neptune’s finger is a thin jutting rock that pokes out of the sea by the arch cape formation near Cabo San Lucas. It’s a great name for a rock worth remembering. The explorers, who named it, did well, and I salute their creativity.