Climbing High Into The Baja Islands

On Pelicans, Magic Lighting of Puerto Los Gatos, The Heights of Isla Santa Catalina, and Whales

On Pelicans
When considering the birds of the Baja Peninsula, the one that comes first to my mind is the Brown Pelican. They are quite prevalent and found all around the Gulf of California. The pelican is an interesting bird to watch, and I see these birds everyday. The pelican is a large bird, perhaps three feet long from head to foot with a long wingspan to accommodate such girth. The pelican has a brown goose like body, but beefed up and far bigger. Its neck and head are white compared to the brown of it’s body. Its bill is also quite imposing, and very pronounced and heavy. Picture a “dunce“ cap connected to the face of a bird. While swimming, they often have it tucked comfortably on its chest, probably for support of the monstrous thing. 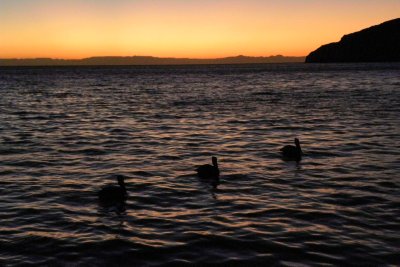 Underneath its heavy bill is a thin expandable gullet like skin sack. Talk about a double chin, this thing is amazing. While feeding, the pelican snaps at a fish catching it and a lot of salt water in the sack, then it drains the water and eats the fish. I don’t know how much it can expand, but it looks as though they could slam a quart of water in about a second. 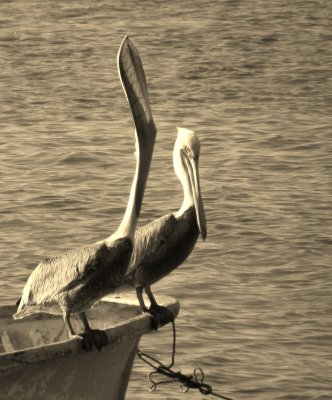 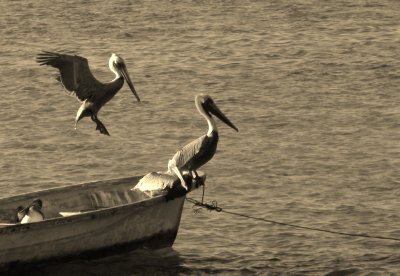 I love watching the pelican skim over the surface of the water. All birds try to conserve their energy, and the pelican will pump its wings for five strokes to give it lift up off the water, then arc its wings in glide position and soar over the water, slowly falling lower until it pumps again. This is how they cross the water, often in a single file group.

Its feeding behavior is quite impressive. It will fly above the water, anywhere from 3 feet up to 15 feet high. When it spots fish, it straightens its body into an arrow bill first diving fast and straight into the water bill first. The fish rarely stands a chance against such an attack. It is impressive to watch, and on my list of photographs I want to take.

On a darker note, this amazing feeding behavior is also its downfall. The big pelican doesn’t have eyelids or protection for its eyes. Every time it dives into the water, it does a little bit of damage to the eye. Over time, the bird goes blind. A blind pelican is more or less a dead pelican. It’s somewhat sad really, to watch the birds snapping at fish they can’t see.

What I’ve been contemplating lately are the piles of pelican bones I find in the rocks of the desert islands around the region. One of our naturalists informed me that the pelicans go for “one more dive.” Think about that. I don’t know if pelicans have much of a thought process, they might not ever know what they are doing; they are just doing what they’ve always done when they make that final dive. They might even think they are still over water, who knows? It’s a sad affair, but a good death. 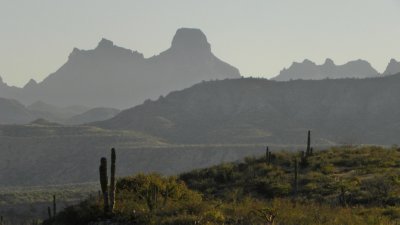 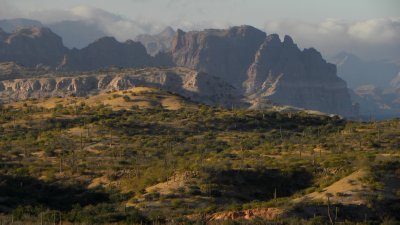 I woke up out of a sound sleep kind of groggy, but hungry and wondering where we were. To my delight and surprise, we had anchored at Puerto Los Gatos, a beautiful bay surrounded by the majestic Sierra de la Giganta mountain range that runs along the eastern side of the Baja Peninsula.

Our ship has visited this PLG before, but I had to work during that visit. My tongue was hanging out on that visit. I longed to hike around in the foothills and up to the sharp desert peaks of the surrounding mountains. It’s just so damn beautiful here. The mountains recede in layers to the distant horizon a different shade of purple gray with each jagged layer.

I grabbed my daypack that I keep handy, put on my sandals and caught the next shuttle to the shore. I didn’t have a lot of time, and I didn’t have a plan. I just started hiking, and figured to get up on a nearby ridge. Walking across the low areas around the creek was a cactus maze. I had to back track at each dead end, as the cactus and thorns were impassable. Finally, I reached the incline of the ridge, and started up. The ground opened up, and I was able to zigzag my way up to the top of the ridge. Success! 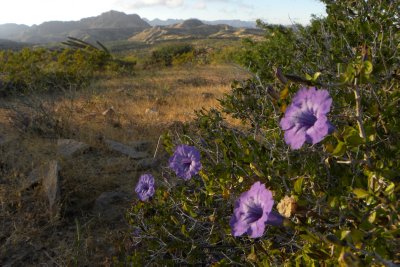 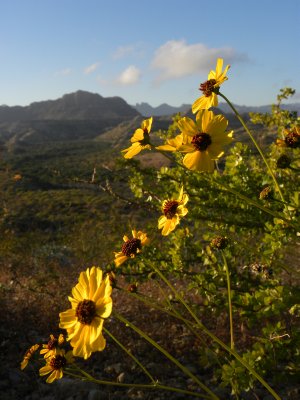 This was where the whole landscape opened up in a beautiful display of cacti and flowers that led to the distant rolling hills and eventually distant mountain peaks. It was breath taking, and one of the more magical hours I’ve had in 2011. Everywhere I turned, there was another dramatic view, and an easy composition to make with my camera. Puerto los Gatos had the most flowers in bloom of any place I’ve visited so far. This makes sense, as it has been the only place with running water. After awhile, I found my rhythm for photography waning, and I put my camera away. It was time to simply sit and take it all in. I let my senses take over, and I didn’t try to focus on anything, but to take it as a whole. 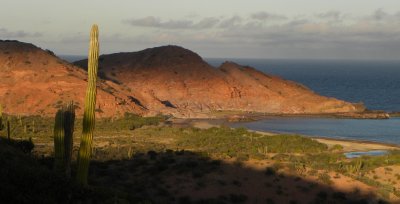 “Sometimes one has a feeling of fullness, of warm wholeness, wherein every sight and object and odor and experience seems to key into a gigantic whole.” John Steinbeck from “The Log From The Sea of Cortez.” 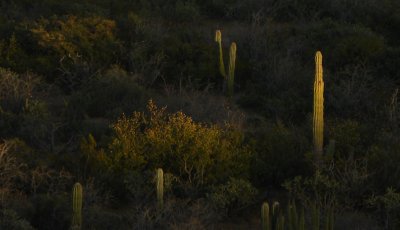 I finally made it through ten days of night shift. My reward was 18 hours of freedom, and an afternoon at Isla de la Catalina. I’ve written about some of the virtues of Catalina before, about the giant barrel cactus, and the rattle less rattlesnake. This time I mostly want to show you more of the desert beauty that makes up this island. I decided I wanted to hike up high to a nearby high point, which would have elephante rock as my backdrop. Elephante is the elephant looking rock at the point of land near where we anchor. Not only is it very picturesque, but it also has great snorkeling to be had along its underwater ledge rock.

To my knowledge, I was the only person on the whole island. Everyone else had gone snorkeling, but I opted to go hiking instead. I was well ahead and away from the crowds, indeed, nobody else had the inclination to head up into the high country. I love the desert high country. The vistas to I saw were spectacular and I really enjoy climbing straight up the loose gravelly hillsides covered in cactus and shrubs.

My foresight was correct, and I had increasingly elevated views of elephante. I really wanted to show case some of the giant barrel cactus along with the elephant rock. To me, nothing would say Catalina better than this composition. I also was hoping to see the rattlesnake, but it remained unseen. 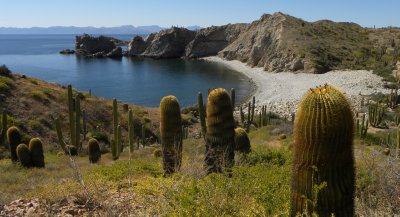 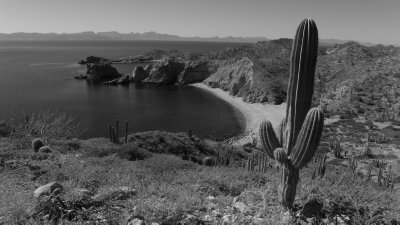 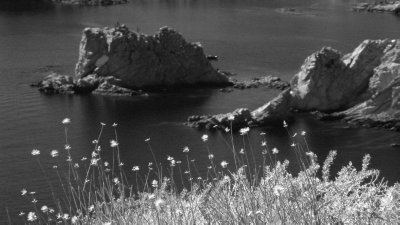 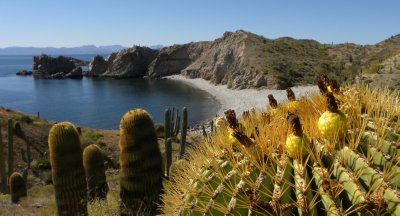 The hike was pleasant, peaceful, and perfect. I could also add placid, peak ridden, and parrot free, but that’s just silly. Anyway, the views from the top of the highest point were gorgeous. Almost all of Isla Santa Catalina opened up. From my high point, I saw that a ridgeline led from it to a number of other high points. To the south, I could see the rugged peninsula. I couldn’t see the eastern end of the island, however. To do that, I would’ve had to climb up the high distant ridges, something I wanted to do, but didn’t have time for. As it was, I slipped and fell a few times as I scrambled down to a hidden cove for a refreshing swim in the surging sea. What a great way to end a hike. Too bad, I had to retrace my steps and climb back up the steep cactus covered ridge before slipping and stumbling back down to the drop off area. In the process, I managed to slice my toe open on a sharp rock, but oddly enough, there wasn’t any pain. It just bled a lot. Ah well. So it goes. 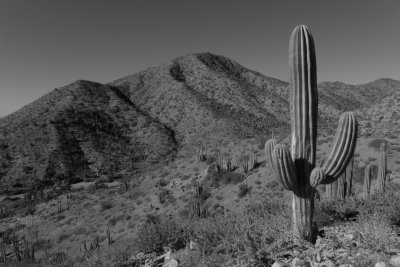 More Whale Sightings
Recently we’ve been getting into some great whale watching. Three days ago, I spent all morning watching humpback whales breeching and fin slapping the water. Whale watching is terrific pastime, especially when you are supposed to be working. The ship was fairly far south, down by the tip of the Baja Peninsula near a place called the “Gorda Banks.” I hadn’t seen humpbacks in a long time, and to see them launching themselves out of the water was a great reintroduction to these magnificent mammals. There were mobius rays going airborne as well, launching themselves completely out of the water with gusto. 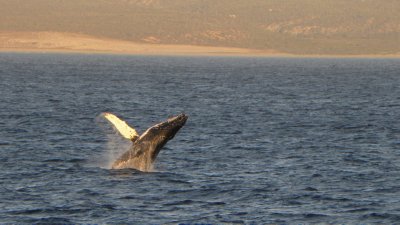 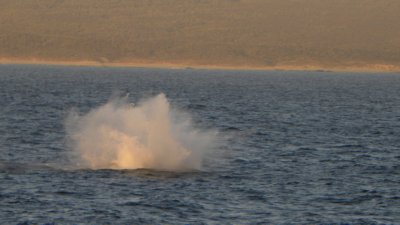 ]
Yesterday, Gray whales surrounded the ship for most of the day. There were five different whale mom and calf pairs making feeding runs by the ship, and in their other favorite spots around upper Magdalena bay. The ship was anchored all day, and our naturalists were giving zodiac tours around the bay to see the whales. I was lucky enough to get aboard when I finished my shift, and I was excited to get to see the Grays from up close. We followed two sets of mother and calves, getting within twenty feet of the surfacing pair. We aren’t there to harass the whales; they were quite indifferent to our boat, which we kept at a safe distance away. What’s really cool about the Gray whale is their curiosity. Sometimes, the whales will approach one of the zodiacs, doing a spy hop to more or less check us out and see what we were. At times, they’ll even approach the boat, allowing people to touch them. Two of my friends were lucky enough to touch a whale yesterday, and I can imagine the experience would be another of my all time great life moments. It is completely dependant on the whale, if they want to come visit you, they will. There is nothing one can do to influence a whale to come close. 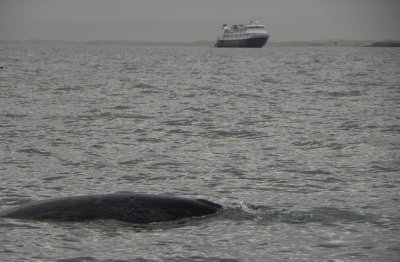 As it was, we watched whales up close for two hours. I’m looking forward to our next visit to “Mag bay” and perhaps, if the stars align, I’ll be able to meet a whale up close and personal.

Tom, once again, awesome photos ... kindling my quest for more adventure in my life. I really love the photo with the cactus sp close with the ocean in the background--great composition --it is a very dynamic photo!

Thank you Jen! You should do some more adventuring! You never know what you will find...That one is prolly my fav of the lot as well. I think it best completes my assignment of showing catalina: a giant barrel cactus and elephante. Gracias!