Time Management and the Modern Explorer

The boat slowed, and I knew we had spotted some sort of sea creatures, but I didn’t yet know what it was. I was in my head (bathroom), getting my day started. I knew that whatever it was, was probably going to be pretty cool. Therefore, I spit out my toothpaste, grabbed my fully charged camera battery and headed up to the bow. The guests had gathered, and I found a group of crew ready to go with their fancy cameras ready to shoot.

I learned we had stopped for a Blue whale. The blue whale is the largest animal on planet earth. This thought alone, gave me a small charge of endorphins coursing though my veins. I couldn’t believe I was going to be lucky enough to witness one at a reasonably close distance.

The sun was bright, and the day was hot (as it always is). There was a soft breath of hot breeze, and the seas were softly rising falling like the contented breathing of someone asleep. Red clouds of krill and invertebrates willowed around like smoke in the water. These smallest life forms come in a variety of shapes and designs, but ultimately most of them end up in the same place: digesting in a fish or mammals stomach. It’s amazing to me that these tiny creatures are the start of the ocean’s culinary chain. These tiny creatures are very important to the ocean’s ecosystem. Without them, none of the spectacular wildlife I’ve seen would be here, and it’s possible we wouldn’t be here either.

Blue whales feed on krill, and while growing can pack on 200 pounds a day. The length of a blue is 100 feet long. Look at the comparison to other animals to give it some perspective. We humans are but a mosquito to these giants. One of our wildlife naturalists on board told me that there are about 50 year round blue whales that live in the Gulf of California. 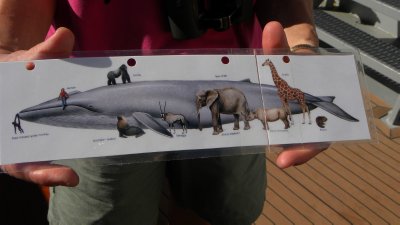 We were very fortunate; this Blue whale wasn’t diving down for long periods. They typically dive for 10 minutes at a time; however, the one we were watching was only going below for half of that. It would surface, blow, swim at the surface for awhile, then arc it’s lengthy back and dive down deep once again. I was in the right place at the right time, and was able to capture its fluke, the tail of the blue as it dove down deep. Seeing the fluke on a blue I’m told is rare, so I feel fortunate to not only see it, but can take this memory with me. 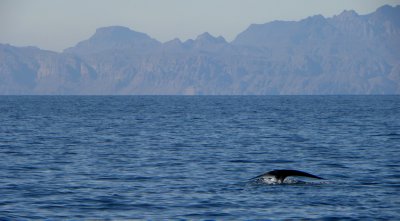 I witnessed my first shark here in Baja. I was snorkeling among the vibrant corral reefs on the Isla Manserate, looking at the beautiful varieties of fish swimming below. In front of me, a school of some of the larger fish suddenly shot past towards shallower water. I thought to myself, “Well, they don’t just bolt for no reason,” and I looked in the direction from which they came. I saw in the distance the sharply angled v-shape of the shark, a gray body and a lighter underbody. It was significantly larger than anything else under the water, and in two strokes of its tail was gone. Awesome! That was a rush. I don’t fear sharks, but I am aware of the fact that while I’m snorkeling, I’m nowhere near the top of the food chain and there are many creatures much larger than I am. I continued my snorkel occasionally glancing ahead to see if it would return. It never did, but I hope to see another shark soon.

Author’s Note: Before starting my contract on the ship, I watched a shark documentary called, “Shark Water.” One man wondered why people feared sharks so much and set about to find out why. What he found is that, as usual, humans don’t understand sharks. We stereotype them into a man eating monster. Not only that, but he exploited the ruthless and needless killing of the sharks for there tails. The shark tail is considered a delicacy in some countries, and will pay top dollar for shark fins to make shark fin soup. It was an eye opening documentary, which I found informative, entertaining, and visually amazing. 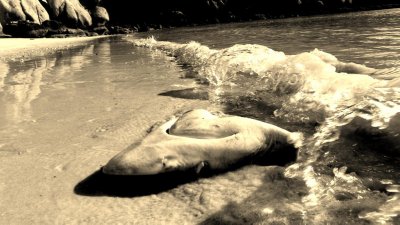 Landing on the small beach on the island of Ispiritu Santo, the first thing I saw was a small shark head bobbing in the froth of the small waves. It was frowning. I guess if I was decapitated and had my head thrown into the sea, I would frown as well. What does this unfortunate shark tell us? Somebody is killing sharks, but to what end? As it happened, I was in a “protected” national park of Mexico, this isn’t reassuring. 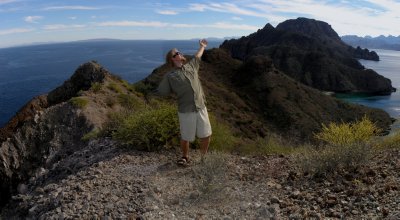 December 23rd, 2010
“This is definitely one of the most beautiful places I have ever seen. I’m sitting atop one of the high, rocky overlooks on the Isla Danzante. Turkey vultures are soaring overhead, gliding effortlessly on the wind, the far off “SMACK” of a breeching manta ray down in the bay makes me turn and pull out my binoculars to watch it for awhile. Who knew? I never knew that rays loved jumping out of the water, until I saw it with my own eyes. All around me are endless views of the beautiful desert meeting the sheer rock cliffs that drop down into the sea below. All around me are more islands, uninhabited, beautiful and wild. The hike was enjoyable, it’s easy to hike in sandals which is a definite bonus, the thought of hot hiking boots seems intolerable at this point. I’ve swam in the ocean every day this trip, mostly on deserted beaches well away from anyone. This is the life. I haven’t worn pants since December 5th. I work very hard (12 hours a day), but the rewards are this: access to the magnificent desert islands that make up Mexico’s national parks, which I can explore as I want. This job is more a working vacation than a regular job.” 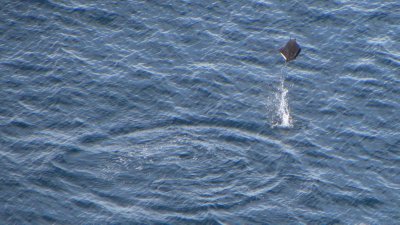 I’m having trouble finding time for anything else other than work and exploration. This blog is suffering because of it. I haven’t made time to try and keep up with my explorations. Every day I work 12 hours. That’s one part of my day, then I catch the zodiac ride to the beach and explore for 3 to 4 hours, after which I only have time to edit my pictures and go to bed to do it all over again. Every day I’m at a new beach that I haven’t seen, and I have my choice of either hiking, beach combing, snorkeling, kayaking, or lying still. To do justice to every exploration, will take time, so please bear with me. To be perfectly honest, I guess I wouldn't have it any other way. I'm seizing every opportunity I have to explore this area, and that after all, is my billing.

I live in a world of exploration and monontony. The endless repetition of a deckhand is completely offset by every day of amazing exploration, discovery and play. I am loving my life right now.

Today, on Boxing Day (for Canadians), I’ve finally made it back to La Paz, and I have some time to catch up with my writings, but words fail me. This region is a desert paradise. Here are some pictures that hopefully will give some insight into my desert world of discovery. 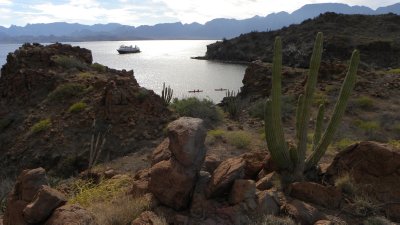 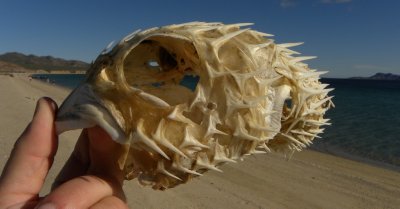 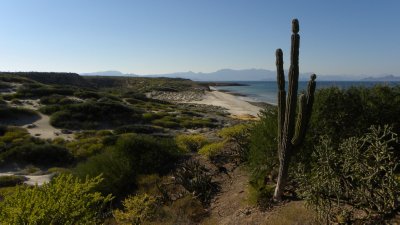 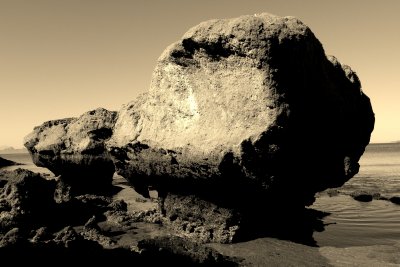 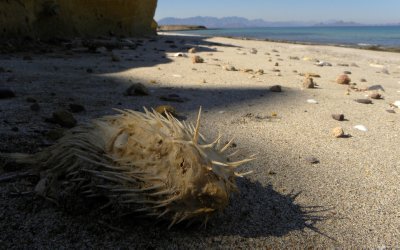 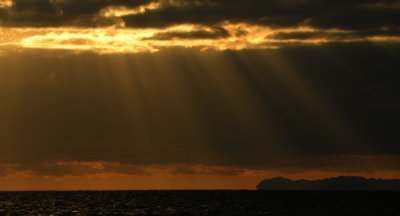 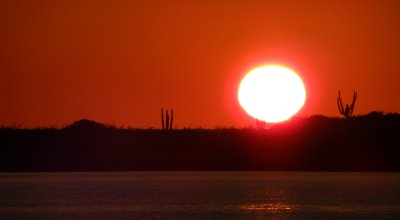 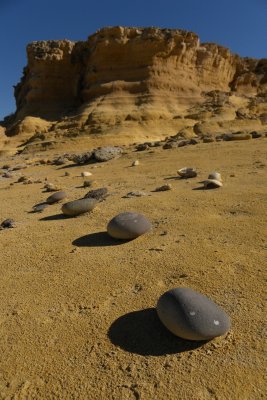 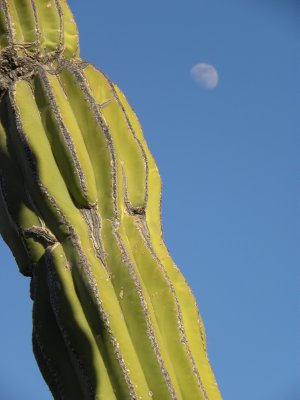 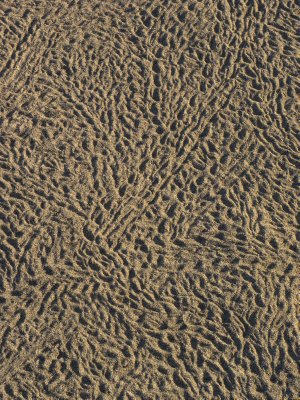 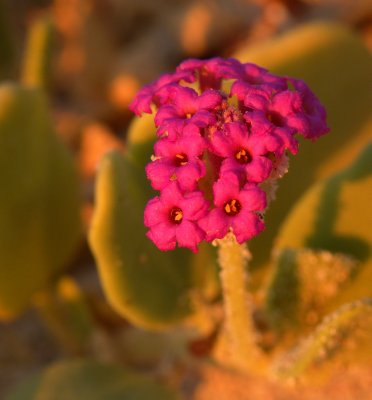 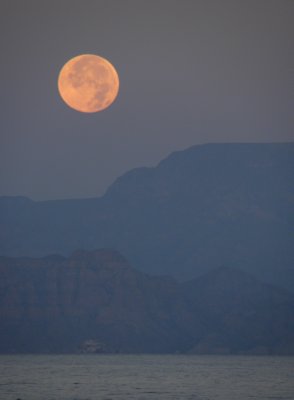 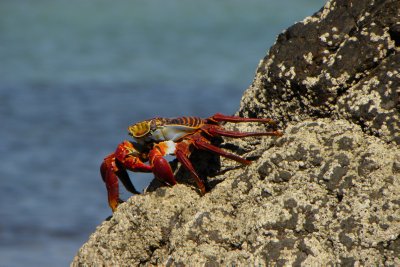 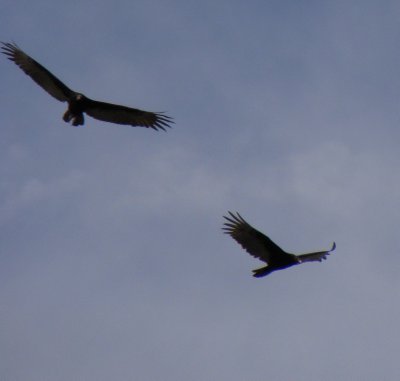 Merry Christmas From The Dusty Vagabond! 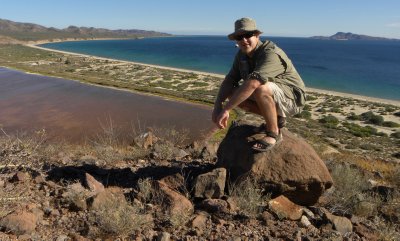 Beautiful man... Well written and great photos. I am really wishing I had more than 2 weeks there this year. That was just a tease. I will relive last year vicariously through you!

Thanks Ryder! You weren't kidding when you called this place, "paradise". I'm curious to see your take on Costa Rica, and more so, Alaska. Have fun in the meantime, and we'll catch up soon enough!