Savoring This First Taste Of Baja

The hours of my day fly by in a frenzied rush of work and play. It’s very difficult to make time to write so far, and I’m not optimistic about my future chances. The reason why I’m struggling so much to find time, is because this region of the world is so very beautiful and alluring, that any free moments I have, I’ve been spending them playing outside in this gorgeous desert landscape. To describe Baja is not easy, as words fail to encapsulate the expansive beauty of this region. To put it simplest, Baja is where a diverse and lush desert landscape meets a beautiful and thriving ocean landscape.

La Paz
My first views of La Paz were of the outskirts of the city at a fueling dock and marina full of sailboats. The land struck me as a cross between Arizona and Southern California. The land was a misarranged collection of foothills, jagged and rocky. Desert plants thrived, and I saw the tall Cardon cactus for the first time. The cardon is very similar to the Saguaro of southern Arizona, and at first that was what I thought they were. Tall palm trees soared skyward in clumps, which brought me back to southern California (see Hollywood and Venice Beach). It was hot. The sun baked the earth without mercy.

La Paz has all the hub-bub of a bustling city, home to roughly 200,000 people. I was limited in my exploring for two reasons. I was on foot, and I had only a couple of hours to spend on each jaunt. I was very excited to finally land in La Paz. It marked my first steps in an international city, in a country that I didn’t understand or speak much of the language. This Dusty Vagabond goes international, and I this is only the beginning. 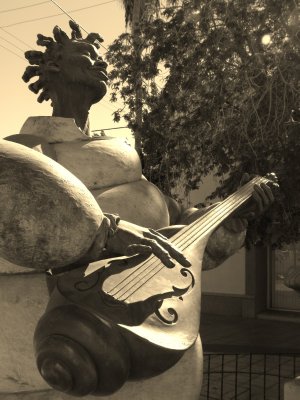 We were docked at the municipal dock which was right next to the busy shopping district along the Malecon. Since I didn’t have any agenda, or inside knowledge of the city, I started out by enjoying an ice cream cone at a nearby ice cream shop. The transaction went well, and I stumbled through my limited Spanish to purchase what I wanted. Fortified, I struck out at random, hoping to find a nice park for an afternoon siesta. I mostly judge cities by there parks and recreation areas and I wanted to sit in the shade for a spell. 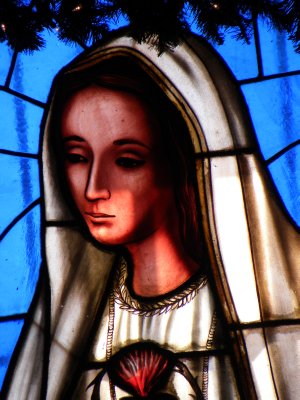 I wandered through town, through the narrow, dusty, hectic streets of Central La Paz. La Paz has a rectangular grid system of streets that make it relatively easy to keep your mental map aligned, and I had no trouble. I saw fenced in school yards, full of chattering kids at recess (I could relate, as I was at recess myself, my only fence a clock). There were shops and restaurants of every variety selling everything imaginable. Some of the shops were humble affairs; others were attempting to appeal to the trendy crowd. Working my way roughly south, I found myself in the “Tarp Market” block. A huge collection of blue tarps were set up open market style, taking up a whole city block. I felt like a mouse in a maze as I made my way through, mildly interested in what they had to sell, but knowing I had nothing to buy. 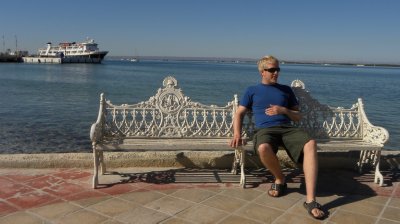 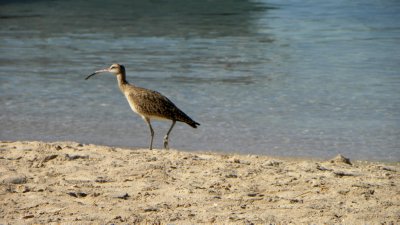 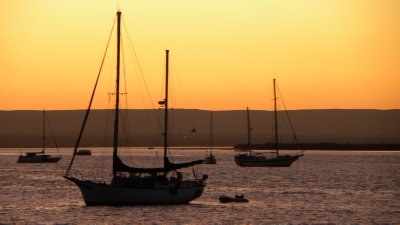 So it went, I wandered for several hours, looking in vain for a park, but getting a good first taste of La Paz. I stopped to smell fresh growing flowers along the boulevard. I saw an orange tree which tempted me to pick one, but I’m no thief.

My favorite part about La Paz (so far), is the dark streets protected from the harsh sun by buildings and tall protective trees. I found the quietest street in La Paz. In the midst of all the hustle and bustle of cars, pedestrians and shops was a perfect Eden of silence. I walked onto a street, sloping downhill back to the water, and I took a few steps into the blissful shade when I realized it was eerily quiet. There was no sound of the city, only the feel of the soft desert wind on my sweaty face. I loved it. I walked deeper into the shade, and looked ahead. There was only one old lazy dog sleeping in the gutter--content and peaceful. I took a wide circle around it, remembering the old adage to let sleeping dogs lie. I saw an old man sitting on a stoop, and like the dog he was nodding off almost asleep. I smiled, and moved on.

“La Paz” means something like ‘quiet tranquility‘. When I learned this, I realized that I found the essence of the city in walking through my shaded oasis of that quiet street. 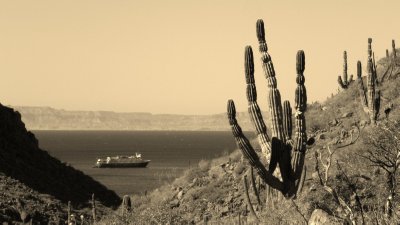 The desert islands of this region that we explore are very lush and thriving with life. I’ve made two jaunts into the desert and have found a plethora of blooming flowers, multiple varieties of cacti and ground shrubs, lizards, spiders and birds. I had a few hours off, so I made the hike across Isla Espiritu Santo in the Archipelago De Espiritu Santo National Park due north of La Paz. The trail was rugged, twisting though a jumble of smooth boulders. The trail was surrounded by the giant cardon cacti. I really like this cactus, it’s very similar to the Saguaro, but it doesn’t have as many spines, and it has more stalks that rise up from its root system. I followed the dry wash high up into the hills that lead to an amazing view of the rugged coast of the eastern side of the island. I was 700 feet above the sea, and felt like I was king of the world. 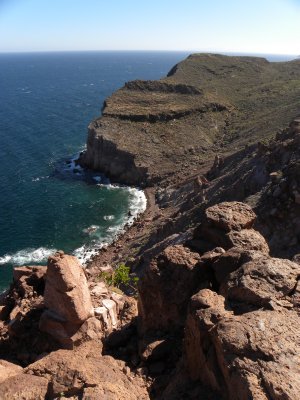 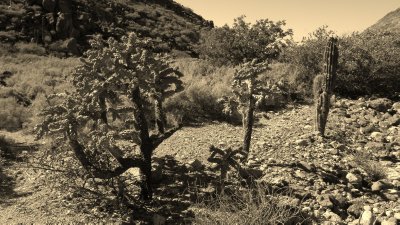 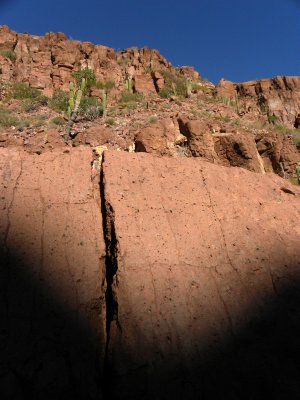 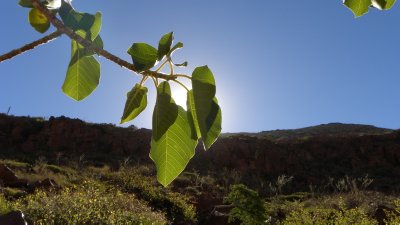 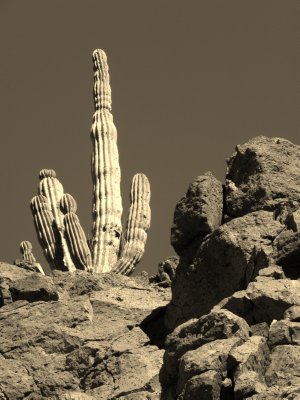 Hiking through most deserts sounds a lot harder than it actually is. There are a lot of plants that carry sharp spines waiting to stab you, but in this desert they are spaced far enough apart to make cross country travel relatively easy. I think this is because of the limited water supply, and each successful plant that grows has claimed its own territory to grow. Think of a side-winder, that snake that moves sideways over the desert sands. Its tracks are a long continuous “ess shaped” snake pattern. This is how to walk cross country in a desert. The trail is rarely straight, but if you look hard enough you can find a way to cross without stepping on fragile plants or hurting yourself.

I marked another first yesterday, namely, I went snorkeling for the first time. It was a hurried affair of grabbing gear (which I didn’t know how to check) and jumping in the zodiac to get to the dive boat. My friends were already in the water and far away, so I had to figure out how to do it by myself. I squashed my goggles on my eyes, put in my mouthpiece and fell backward into the water, so far so good. In the water, I blew out the water, and tried to breath through it. Nothing but cool salt water heading into my lungs. Damn! I paddled out of the water, tried again. More water into my lungs, coughing and hacking. At this point, I decided that snorkeling sucked. More or less it was a way to slowly drown yourself. I knew something was wrong, so I swam out to my friends and told them my problems. One pointed out that my mouth piece was broken, and missing a re-breather. She was a competent diver, so she gave me hers, and let me use hers. That made all the difference! From then on, I was happily exploring the nooks and crannies of the pinkish corral. I saw many varieties of fish, which I’ve yet to learn the names, but the few I learned were Angel fish, the “puffer fish” and some skinny sea stars.

At one point I swam though a school of small golden striped fish, and I grinned from ear to ear. It is so cool to swim and watch fish in this way. I attempted a few shallow dives, and those went well. I was stung on the leg by a small translucent jelly fish maybe about the size of a chicken egg, another first. It’s kind of like a mild bee sting; it’s noticeable, but not extremely painful.

I’m going to snorkel as much as possible for the rest of my life. 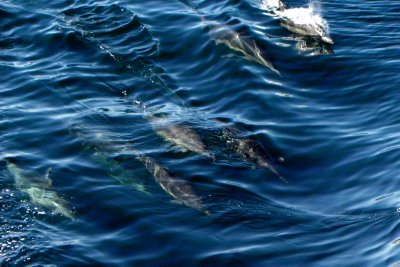 We were sailing north around Isla Santa Catalina when we saw the pod of dolphins. They were feeding along the surface, and there were hundreds of them swimming, jumping, diving, and squealing to one another. It was impressive, and I’ve never seen anything like it. Our engineers have set up an undersea audio system for our ship that cancels out most of the ships noise. This allowed us to hear the squeals and cliques of the dolphins over our sound system while we were watching them. Dolphins are cool. The dolphins seem to roam in packs, taking occasional opportunity to jump through sky. We were all enthralled, and we sat and watched them for 40 minutes in the hot sun of late afternoon.

Reflections On The Journey So Far

I keep expecting myself to wake up from this amazing dream. Every day, at one point or another, I realize this amazing dream is my life. Every decision I’ve ever made has led to this point, and I love my life right now. I can’t believe I’m getting paid for this! To be honest, and I think if they paid me in sand I would still happily come to work. Baja is an amazing place, and I’m infatuated with its beauty and diversity of life. 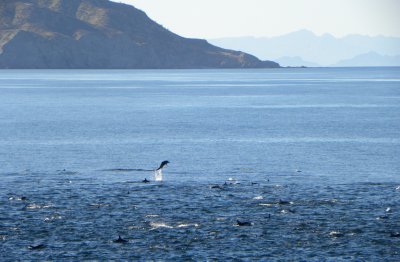 Onward!!! Let’s see what else is out there!

I believe your first steps in an international city were in Canada!

True. However, in Canada, I at least spoke one of the languages reasonably well. Here in Mexico, It's a different ballgame.

La Fuente ROCKS! It's the best ice cream in the world, I do believe.

I'm glad you are liking it down there.

See you in a few days.