We crossed over the Columbia River Bar at about 2 am Saturday morning. I got up for the crossing, as I was very interested in being a part of crossing one of the more dangerous stretches of water in the Pacific ocean. The Columbia River Bar is known as the “Graveyard of the Pacific” There have been over a hundred documented shipwrecks in the area, and countless undocumented losses. The reason why this place is so dangerous, is because the 1200 (give or take) mile long Columbia River empties into the roiling North Pacific Ocean. Added to this mix are the strong winter storms that surge across the pacific in a continual salvo of oceanic and meteorological energy. The combined wind and current often brew up the wind into a gale of over 60 knots, and build the seas to over 40 feet. This is no place for the timid.

Our passage was uneventful. We rocked and rolled in the 9 foot swell, but by all accounts, it was one of the smoothest crossings that our veteran crew members could remember. There really wasn’t much to see, but the boat was definitely pitching back and forth in the moderate seas. I stayed awake watching our crossing on our GPS, but soon grew tired and returned to my bunk. Thus began our three day voyage to San Francisco.

Day One:
I awoke to the heaving swells of the open ocean. It was cloudy out, gray and misting. We were traveling south about 14 miles off the coast of Oregon. While I have driven this section of coastline several times, this would mark my first time sailing of the coast. Not that there was much to see. The heavy mists and fog made for a gray world with limited visibility. Inside the crew lounge, it was eternally dusk. The day before we left, we spent a lot of time “battening down the hatches”- securing everything on the boat for potential rough conditions. This included putting aluminum window plates on all of our main deck windows. It took away all outside light, and left us in a state of semi-darkness while we hung out in the main dining room.

We didn’t have many chores to do. Most of my time on duty was spent reading, writing, socializing, eating, and making the rounds to see all was secure. When my shift was over, we played games, Boggle mostly, watched movies, socialized, and enjoyed our downtime.

Walking around on a tilting ship is not easy, and it seemed everyone had there own technique for crossing the open areas of the dining area. Some would take baby steps, making short choppy steps to keep balance. Others would walk normally, and then make quick steps to curb the momentum that was sending them away from their destination. I liked to make long slow arcs, walking with the tilt to starboard, then using the tipping point and momentum back to portside to get me where I wanted to be. All of us looked silly, but that’s part of the fun of being onboard. I vacuumed the rug, and it was the most fun I’ve ever had vacuuming. I tried to do straight lines, but it was impossible, and the rug looked like a drunkard had haphazardly cleaned the rug.

We were in a continual state of swaying. I thought that reggae music should have been played over our sound system, to make all our swaying make more sense. It was pointless to do my usual stretching routine that I like to do, as the tilting of the boats axis put way more strain on the muscles compared to normal.

As it is, I’m not really designed for engine rooms, or the lazzarete. I’m of average height, five foot eleven inches tall. So far, I’ve managed to crack my head on the metal of the boat every day that I’ve been aboard. My head is beginning to resemble a golf ball with all the new divots it has acquired. My shins have faired no better, as I’ve raked them over the metal doorways countless times. I’ve gotten better about it, but I can’t wait until I finally learn to protect my head.

We began to see more wildlife. I saw albatross once again (a sign of good luck). I saw two different varieties and as many as five of them at once. They were sailing the winds, making long snake like arcs across the ocean, tacking their way southward. Their long wings were extended to full extent to catch as much wind as possible. I like the albatross, especially their size and for how close they fly to the water. Their wingtips seem to touch the swells as they bank and turn into the wind.

Day Two:
The second day of sailing brought better seas, and blue skies. We could see the shoreline once again, and the temperature was warm. We were somewhere off of the coast of California, and I like to think it was somewhere off of the “lost coast.” The lost coast is a hard to reach area, which remains one of the prettiest in California. I’ve never seen it myself, but it’s on my list of places to explore in California, should I be so fortunate.

The bow of our ship was the place to be on this day. Inside the ship, it was hot and oppressive, but outside it was beautiful. The warm sun was shining, and the seas were pleasant. A long fog bank could be seen off to the west, but staying away from us. To the east, the California coast was rugged, the coast mountains were glowing a golden green. A lot of the staff came outside to enjoy the sun, and we were all really digging our lives at that particular moment. To think we were getting paid for this was a pleasant thought. They could have paid me in sand, and I still would have come to work. I had some good conversations with some of my new friends, and it was nice to spend time getting to know them.

That evening, the dolphins came. Dolphins have been known to swim and play in the wake of ships for as long as men sailed the seas. I’d never seen dolphins before, and I was quite excited to see them. I’m guessing there was a group of eight or more that would skim just underneath the water, then course right into our wake wave, do a barrel roll, and then jump out of the water as the swell caught up with us. It was amazing! The light was fantastic from the warm luminescence of the setting sun. The dolphins were playing, very much in their element, and I was in mine. Many staff members came out, and we were all excited to take photos, videos, and just enjoy the amazing agility and playfulness of the dolphins. They were Pacific White Sided Dolphins, and we enjoyed them very much. 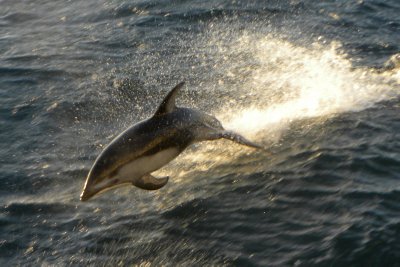 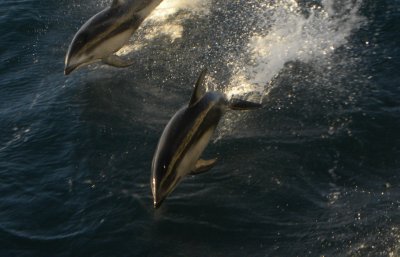 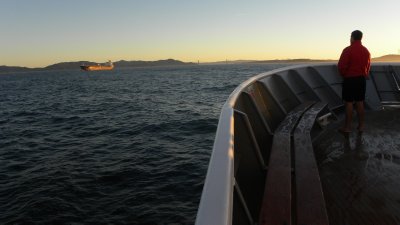 Our last day dawned warm and clear. We were steadily heading east, into the rising sun and directly towards the coppery orange span of the Golden Gate Bridge. Most of the staff came out for the moment. It marked the end of our first positioning, and an entrance to the San Francisco area, our temporary home for two weeks. As the sun rose, the air warmed nicely, and we were bathed in sunlight. It was glorious. It was the best entrance I’ve ever made into San Francisco. In years past, I’ve driven south over the bridge, pissed off, and tense, hating the intense flow of city traffic and writing off the city as a hell hole. It wasn’t a fair evaluation, and I regret my impatience and stubborn behavior. In comparison, the fastest speed we travel on our ship is around 10 knots (just over 10 miles an hour). It’s very relaxed, and stress free. It gives you time to take it all in, and since I wasn’t driving, I could take my time in composing some photos, and really, really enjoy the morning. A friend gave me half of her grape fruit, and its fresh citrus was a perfect compliment to the morning. 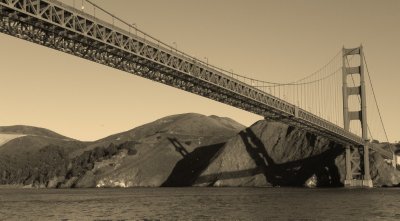 We passed under the impressive span, and I couldn’t help but remember the stories of the men who built this bridge. Specifically, the “Halfway to Hell” club, a group of guys who fell off of the span during construction- only to be saved by the safety nets that were installed underneath, designed for that purpose. The Golden Gate construction was the first that made mandatory use of hard hats and safety nets for bridge workers. 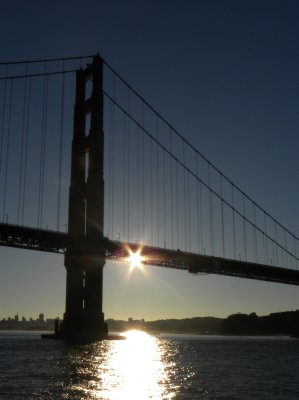 We cheered and posed for a group picture, and soon everyone drifted off to the dining area for breakfast. I was more interested in seeing the city-scape, Alcatraz, the bay bridge, and the downtown area. There were great views in every direction, and I took pleasure in the beginning of my day. 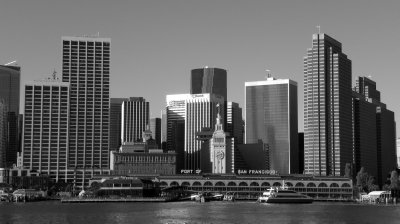 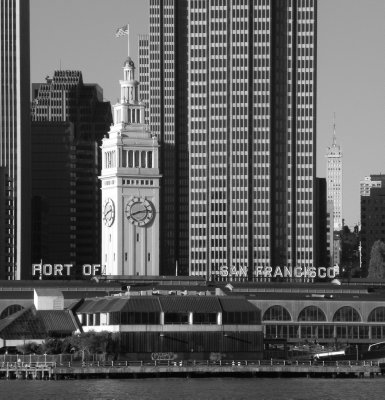 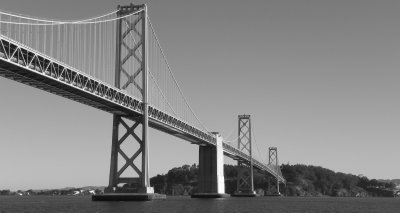 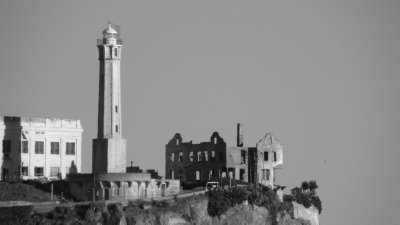 That was the last peaceful moment I’ve had. After we docked, we got busy getting the ship back in order. It was a long day of hard work in the hot sun. Later that evening, I finally checked my phone messages and learned of family emergency and terrible news from home. My mom had a major stroke, and it wasn’t looking good. It was if the floor fell right out from underneath me, and I had to get home. Everything else seemed completely pointless, and so I got the next flight I could to make it back home.

In this world, you can be flying high one minute, only to have your wings fall off the next and sent into a spiraling freefall. That’s life. Sometimes it’s good, sometimes it’s bad. It’s easy to enjoy life when times are good. In my experience, bad times are usually horrible to go through, but can give you valuable perspective into what’s truly important. I often learn more about myself, and others when times are bad, then when they are good. I wouldn‘t be who I am today, if I hadn‘t experienced the darker side of life. I’m hanging in there, often lost in my thoughts and contemplating how to face the unknown. It’s not pleasant, but I’m buoyed by my friends and family who have and will be by my side.

Hullo Tom~ I just wanted to let you know that we're thinking of you here on The SeaBird. I'm praying for you and your family.
~

Tom,
I heard the news about your mom from Captain Kay. My thoughts are with you and your family. I hope to see you back on the ship soon. Your blog is beautiful...I bookmarked it for future reading!
Be well!
Jackie

Thank you Faith and Jackie for your kind thoughts. Its tough, but we'll make it through, and I'll see you in a while back on board..

Sorry to hear about your mom. I know she meant a lot to you and I can't imagine what you are going through.