The Best of Astoria

Some History, Good Eats, The People, The Column, and the Columbia River Bar 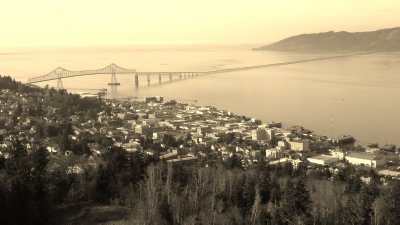 I’ve been spending time in the small coastal town of Astoria, Oregon lately. Astoria has some charms, beyond being famous for the home of “The Goonies.” First, some historical facts. Astoria started out as a fur trader’s settlement in the early 1800’s and has been settled ever since. In fact, it is the oldest permanent settlement west of the Mississippi River in the U.S. John Jacob Astor’s controlling grip on the North American Fur Trade brought fur traders, opened the settlement, and was named after him. When the fur bearing animals disappeared, the people turned to Salmon for their livelihood. Salmon sustained the town well into the 1900’s. The fisherman caught the fish and sold it to the cannery who sold it to the consumer. “We didn’t mind the smell (referring to the stench of fish products). To us, it smelled like money, and we felt prosperous.” ~ Astoria Fisherman, talking about the Astoria fishing industry. 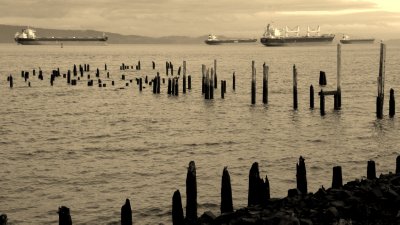 There aren’t any canneries open anymore. Hundreds of wood pilings line the shore line of Astoria, reminders of former industry. Astoria lives on, a nice town, an enjoyable place to spend some time if you get the opportunity. 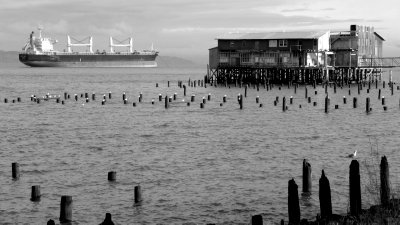 On my first visit, I had three hours to explore the town. I was free from ship duties for the day, and we didn’t set sail until the evening. It felt fantastic to be walking on land, in the bright sunshine. I felt good, and wanted to see what this town had to offer. I moseyed toward the downtown area, and soon found myself on a binge of impulse buying. What does a vagabond spend his money on when he’s on a “spree? “ Well, the first thing I found was a music store, and I needed a capo for my banjo, so that was an easy decision. Continuing on, I found a chocolatier who had fresh truffles for sale. I’m a man who can’t resist chocolate, and refuses to feel guilty about it. Five truffles were purchased, three of which went to some of the hard working stewards on our ship. I’m quite generous with my chocolate.

Walking around the corner, I started my way back east on Commercial Ave, the other main downtown street. I stopped in at a local market to buy some hand soap for my cabin on the boat. A plan formed in my mind, and I bought an ice cold drink to enjoy later on at the Astoria Column, a lofty tower that overlooks the country side from high atop the steep hills above town. It was a good thing I did, as the hike up the steep hills of Astoria was a grueling, dehydrating climb. I’ll talk more about that later. I digress, and want to talk more about the downtown spending spree I was enjoying. I decided I wanted a book, so I stopped in at a likeable new and used bookseller (Godfather‘s). I briefly glanced around at the well ordered shelves of books and found myself in the Non-Fiction section. I remembered the last name of an author of a book I wanted to read, and looked at the shelf for “Larson.” Sure enough, they had the book I was looking for. “Thunderstruck” by Erik Larson. It was a done deal. I made my purchase, and was about to leave, when I decided to write an email before I continued on my grand adventure up to the column.

As I said, the climb up the column is arduous. The people of Astoria have legs of steel, without a doubt. I enjoyed the hike. It felt really good to stretch my legs out on some serious uphill. It was kind of maddening however, as I didn’t see the tower until I finally rounded a bend after many blocks of walking. I was following the signs that led up to the park. I like to see my goal, when I’m laboring that hard. 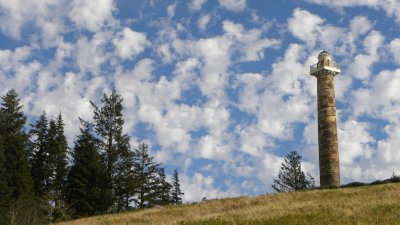 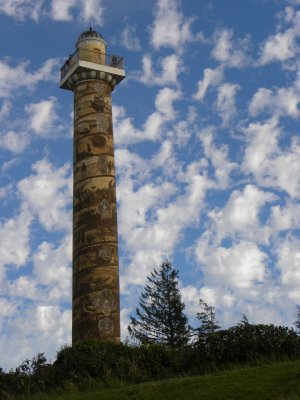 Then there it was. A tall lighthouse like pillar set atop a hillside towering above the nearby coniferous trees. My timing was good. The soft puffs of the clearing white clouds dotted in the azure blue sky made for a pleasing backdrop for the sunlit column. The grounds of the tower were landscaped and well manicured. The tower area had uniform sidewalks of concrete led people to the entrance of the tower, and the spiraling staircase that rose up to the viewing platform. I was getting tired from all the vertical footwork I was making on this jaunt. However, I knew that soon enough I would be at the highest point around, and there would be nothing more to climb. When I walked through the door to the viewing platform, the entire northwest corner of Oregon spread out before me in every direction. It was gorgeous. I could easily see across the river into Washington, and Cape Disappointment. I could see the famed Columbia Bar, also known as the “Graveyard of the Pacific.” An area of violent seas, where the 1300 mile long Columbia River meets the raging north Pacific Ocean. I’ll be writing more about the Columbia Bar, in a few days, as I’ll be crossing over it myself for the first time. 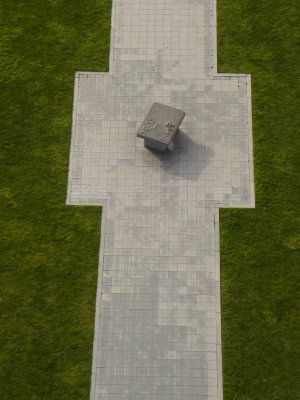 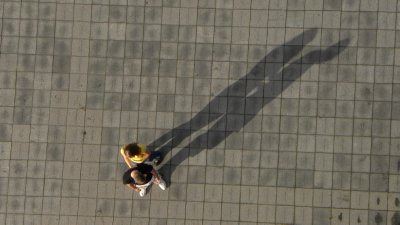 Looking down onto the concrete far below, some kids were messing around with the gliders they sell at the gift shop. The slanting low angled sunlight of late afternoon made for interesting long shadows on the grid of concrete.

After awhile I tromped back down the stairs and out into the sunny meadow where I relaxed on a picnic table for awhile, before back tracking down the hills to the ship. I was probably making the longest strides of my life as I made my way back down those steep hills. I’d like to see an Astorian walk on flat ground; I bet it would look awkward and funny, like a bowlegged cowboy getting off his horse after many days of riding.

The people of Astoria are open to street conversation. I’ve spoken to four random people on the street, each with their own story. I met a college student studying to be a marine biologist. I talked at length with an elderly lady about what types of meat she prefers to eat. She eats buffalo way more than fish, chicken or red meat. She doesn’t eat pork at all. You might be wondering why I’m relaying this onto you, poor reader; after all, the eating habits of a random woman are hardly vagabond material. This lady spent the better part of fifteen minutes explaining her eating habits to me, and I was patient enough to listen to her, even though my own half pound burger and fries from the Custard King was slowly cooling in its wrapper. I just wanted to share her story with you. I met the leader of a litter pick up crew who told me about some of the better beaches along the coast. Most of them I’ve been to, but he did tell me about one called “Indian Beach” which I’ve never visited. Finally, I met a bookseller, who gave me the location of the bookstore I had already visited. A nice lot, and all of them seemed generally proud of their town. 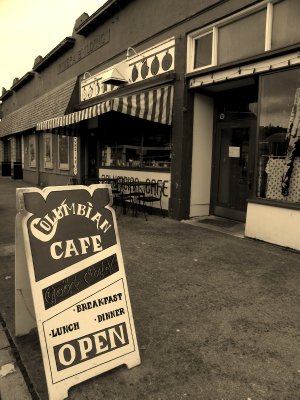 If you find yourself looking for a good café in Astoria, look no further than the Columbian Café on Marine Drive. I had a day off, and I was looking to go out for breakfast. I ordered Italian sausage, eggs and toast and with it they offered four kinds of pepper jelly. I’m now a huge fan of pepper jelly, cayenne, in particular. It was sweet and spicy, and excellent on toast.

I ended off my day by visiting the Columbia River Maritime Museum. This is one of the better museums I’ve ever visited, and I was pleasantly surprised at how informative and interesting it turned out to be. It covers a lot of ground, from shipwrecks, aids to navigation, the coast guard, fishing, canneries, tug and barges, steamships, and Bar Pilots. I liked all of it, but I was especially into the old stories from the gill netters, the ship wrecks, the history of the Columbia Bar, and the bar pilots. 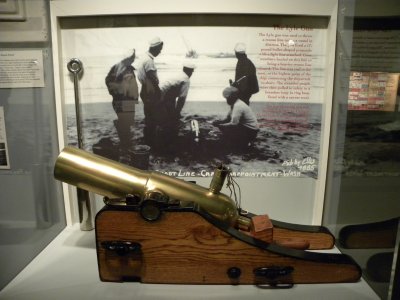 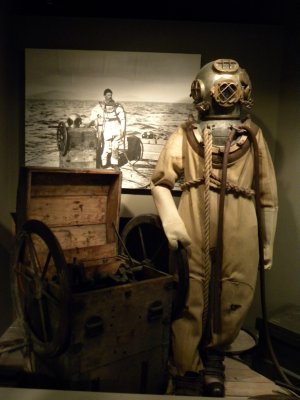 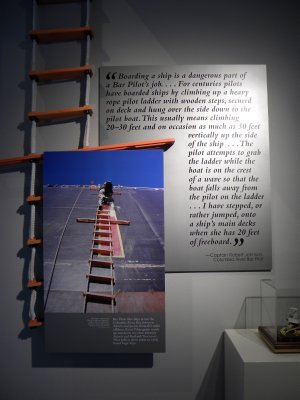 The Columbia River bar pilots are the elite class of the marine navigators. All commercial vessels must take on a pilot to navigate them over the bar. To board the super container ships, the pilots head out during any kind of day or night, in 60 knot winds, and seas commonly over 30 foot seas. They pull along side the monstrous ships, and climb up a wood and plank ladder. Then they direct the vessel safely over the bar. 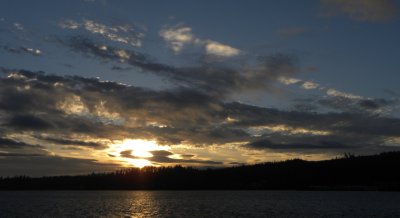 I can’t wait to see the bar for myself. It’s going to happen tonight at 2 am. There is so much sea faring history in the bar. It’s known as the graveyard of the pacific, and dozens of ships have floundered and sunk in its dangerous waters. It’s going to be fun…

When I was there, I got good fish and chips out of a boat that had been converted into a fish and chips stand. It was right across the road from the museum, on a grassy knoll. Maybe I recommended this to you before, but if not: check it out.

Well. I would cept I won't be back there for awhile..I did see that renovated boat, but I was already quite satisfied by my other choices...

Enjoyed your good piece on Astoria. It is indeed a beautiful town. The bar pilots actually use a helicopter about 70 per cent of the time now, to get out to the big ships. If the helicopter can't go out due to severe weather, then they use one of their two state-of-the-art pilot ships. Either way, they are self-described adrenalin junkies....

Thanks Lynne! And thank you for the added insight into the bar pilots.. I should also mention the coast guardsmen who practice life saving techhniques on the bar in hellacious conditions. They practice rescues by helicopter and by lifeboat working in unbelievable seas. They are among the best of the best at saving lives at sea. Everybody who goes to sea, appreciates the fact that the US Coast Guard is damn good at what they do. It gives me peace of mind to know they are there and ready to help.