Exploring Deeper into the Canyon, Behind the Falls

Returning to Palouse Falls was one of the better decisions I’ve made lately. To make it happen, I had to stay awake for what turned out to be 23 hours straight. I’ve been adapting well to long hours and little sleep it seems. I made the plan the day before, I would work my night shift, stay up, and catch the zodiac/ bus ride to the falls with the guests who were going on a tour there that day. There was in fact, two tours going that day, which allowed me an opportunity to stay longer as I could go there with the first group and return with the second group. This gave me three uninterrupted hours to explore this magnificent gem of the Palouse, and Washington State.

The Palouse region of Washington is located in the extreme southeast part of the state. It is a land of high rolling hills, squat eroded mesas, dotted with glacial erratic- boulders dropped from retreating glaciers of long ago. The land is wild, undulating and lumpy, carved and shaped by the usual suspects: water and wind. It has a desolate and barren feel to it, like the empty distances of western Kansas or the sand hills of Nebraska. However, those locales are flat, and the Palouse is anything but flat. I tip my hat to the pioneers who crossed this region by foot, those hard men and women had legs of steel, make no mistake. To view the Palouse from a high point is to see miles of vertical fields stretching to the horizon.

Agriculturally, the Palouse is one of the best wheat producing areas in the world. The climate is ideally suited to wheat, and so the land is covered in long acres of fields, mixed with occasional small stands of apple orchards. The ranchers who live here must do more planning than the average settler must. The nearest grocery store can be over 40 miles away. Forgetting the milk too many times is grounds for divorce in these parts.

I had a plan in my mind for my visit to the falls. Two years ago, when I visited in the spring, I had spied a promising trail that might lead down to the water and possibly to the lip of the high falls. On that visit, for whatever reason, I didn’t follow the trail, but instead was content to gaze at the expansive canyon from up high. This time, I was going to beeline it straight to the trail and head down to the river. I found the trail easily enough, right where I left it, in fact.

Looking down from the top of the ridge, I could see a thin line of the trail first descending a scree pile and then worming its way through a tangle of sage to the upper falls. This was indeed my ticket to paradise. Without a further glance, I galloped down the ridge to the top of the talus pile. I love running down talus piles. The trick is to keep your feet moving quickly, and make small switchbacks to check your speed. It looks reckless, and it is, but my technique is a controlled recklessness. Once committed to running down a talus pile, the only thing to do is to go with it, as stopping midway is hard to do. I kept my feet moving, making light steps, and descended the 500-foot pile with relative ease.
I was on the floor of the canyon, walking a beaten trail through a corridor of wet, green sage from the morning dew that had formed on it. I love the smell of sage. It’s such a clean, earthy, powerful smell. It evokes images and memories of past desert jaunts, solitude, and wanderlust. It’s powerful medicine, both figuratively and in reality, (drinking a bitter sage tea has been used to combat colds). The sun was still rising over the canyon wall, illuminating the southern half of the floor of the canyon, but leaving the northern half in cold blue shadow. The air was quite fresh, and the sound of the upper falls drowned out any other noise except that of my thoughts. I was in my element once again. 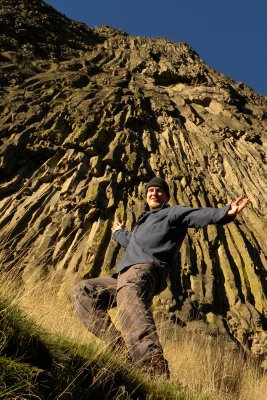 I set up a few pictures of the upper falls, satisfied with my efforts; I moved on over the slippery rocks and found that the trail continued toward the high falls. I love it when a hunch proves correct. I found reserves of energy I didn’t think I had, after being up for 18 hours, and I bounded over the rocks, jogging along the trail, energetic as a deer. The trail clung to the base of the sheer canyon wall, and I had to slow down to pick my way across a few sketchy areas. Rounding a final shallow turn, I found myself looking at the Castle Rocks, a band of thin finger like rock jutting into the sky; they look like two hands rose up waiting to catch a falling star. 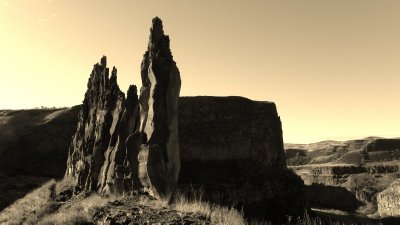 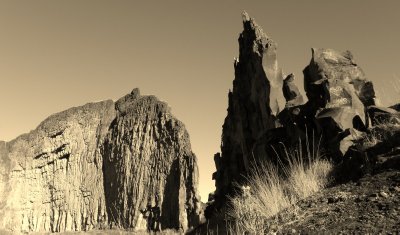 The whole canyon opened up before me, I was looking at the expansive Palouse Canyon from the north side looking south, and it was as awesome and impressive as I’d hoped it would be. The canyon is expansive, a massive void that impresses upon the senses. I found myself settling down for a moment, sitting in a good location to take a drink of water, and a drink of the beautiful scenery in which I was situated. This huge canyon was carved down through the ages, and the layering of the rock is evident in the sheer canyon walls that surround the falls. It rather puts things into perspective, what a brief time we live in comparison to the eons that it took to carve the rock. 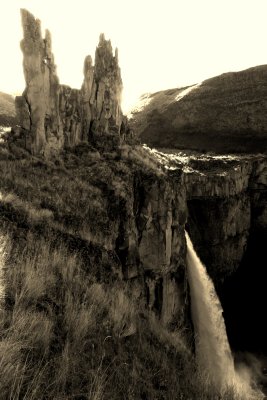 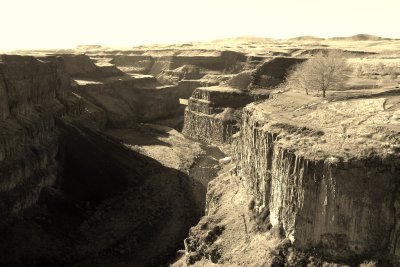 In time, I took out my camera and tried to do the landscape justice. I found I like the Castle Rocks the best, and the lighting was decent but with the sun rising it soon would wash out the scene. I worked methodically, and ended up content with my choices. 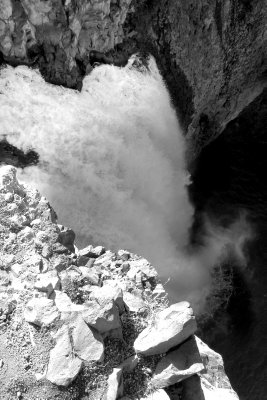 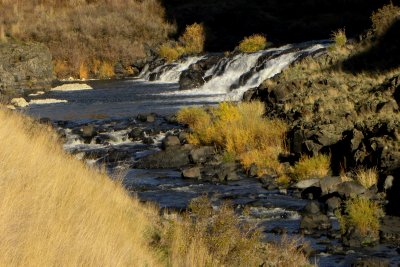 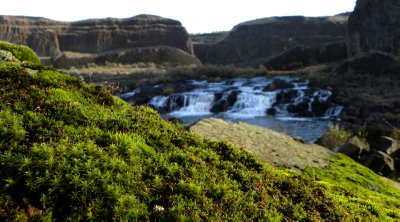 Hiking out was just as pleasant as hiking in. The upper falls were finally lit up in sunlight, and they made a pleasant resting spot before I scrambled back up the steep talus pile and topping out on the ridge once again. The climb was a killer. Gasping, and churning, I burned my legs back up the incline, and made it back up to the quiet top of the mesa. 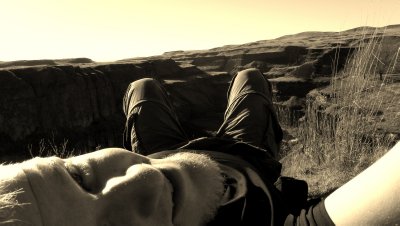 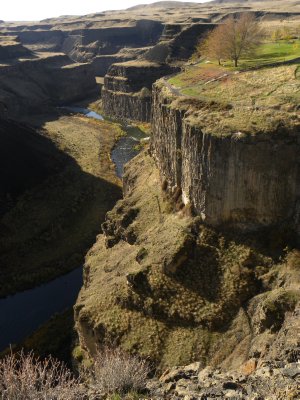 ]
The sun was beating down, and it felt good to sit on the canyon edge and gaze out over the river, the falls, and the majestic canyon out in front of me. I settled into a good loafing position using my backpack as a pillow. I watched the scenery, and then I noticed about 10 black beetles milling about in the short grass around me. I pondered there movement, and wondered what was going on in there world. A migration? Foraging for food? Who knows? All I know is that I thoroughly enjoyed my day at Palouse Falls, and I’m looking forward to my next visit. 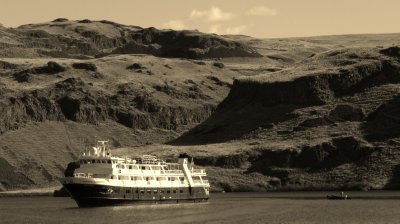