Working The Graveyard, Solitude, Takes on the Night

I’m working the graveyard shift right now, from 7 pm to 7 am. I’ve never worked night shift before, and I was curious to see how I would function trying something completely different. So far, I’ve found that I can handle it quite well, and relatively easily. After my shift, I eat breakfast, take a shower and go to bed to hopefully sleep for 8 hours. Sleep is the name of the game. It’s important to get enough of it, because any shortage will make the early hours a challenge to stay awake. I’ve also done it without caffeine. Of course, I have my usual cup of coffee when I wake up, and I like a cup of hot tea about 2 am, but that’s it. I didn’t want to be a hopped up, caffeine dependent slave. I wanted to be alert, and functioning, adapting to the night instead of fighting it. My plan has worked, and I’ve enjoyed the darkest hours.

Embracing the night has its moments: I’ve found myself dying of laughter all by myself in the empty dining room, remembering a funny bit from a movie. I love leaning on the rail immersed in the deep inky darkness of the night. There is a ceiling of stars above me, along freight train flying by on the riverbank, and a fresh cool breeze whipping by my face. It’s so very beautiful and tranquil.

There’s a quality to the night that embraces you, enveloping you in the hidden knowledge of darkness. The night is a peaceful solitude. I like the idea that I’m the only person awake and the entire world is asleep. I like having the ship to myself. Living in such a small area as a boat makes it hard to find privacy.

There are nightly chores to finish every night, and a bridge watch to assist. Another deckhand and I, switch this job up hourly after making a security round to break up the chores we have to do. This also helps break up the monotony of staring into the darkness trying to stay awake. I like being on the watch late at night. Our second mate likes old classic country music, which he plays as soon as he gets on shift. He usually has the heat blasting, “I like to bring a little South Carolina wherever I go.” Old music warbles out the radio played by Bob Wills, Jon Conlee, Marty Robbins, and Tom T. Hall among many others. So I sit there, scanning the horizon for navigation lights, logs, boat traffic, and anything else, listening to old tunes in the hot cabin, and making light conversation about whatever comes to mind.

Fringe benefits of this job:

Watching the silver moonlight shimmer on the river. I can’t help but think of David Bromberg’s “Moonlight on the Water”. It’s so very beautiful, especially when view with binoculars.

We have very high-powered binoculars up on the bridge. The other night, I used them to scope out Venus, and I saw its three moons like tiny glimmering mosquitoes circling around an orb.

Seeing the Columbia River and Snake River from the water is a cool perspective. For those of you who are interested in amazing engineering projects, the nine locks that we pass through on our upstream voyage and downstream voyage are very impressive. As a deckhand, one of our jobs is to toss a loop of 2 inch line around a bollard, making it fast to secure the vessel to the side of the lock. This is a lot of fun. On my first throw, I was too keyed up and ready to throw that when my partner said, “Wait.” I threw the line into the water. I was about 15 feet away from the bollard, and didn’t know that we closed in before we had to throw. It was quite funny. I was able to reload and make the next toss with plenty of time to spare. I generally learn from bad experience, and when learning something completely new, I tend to make a mess of it. Ah well, no worries, I haven’t missed a lock toss since that very first throw. 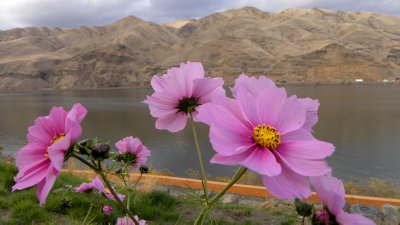 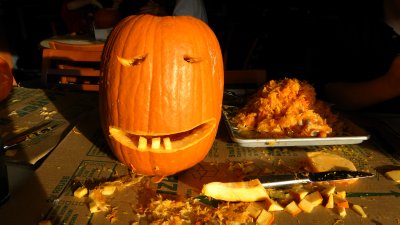 Today I took part in perhaps the first ever banjo sale on the streets of Portland. I have been itching to get my hands on one, as I hadn’t played in quite some time. Using the all-powerful tool called the internet, I located one, contacted the owner, convinced her to drive to the dock, and met her on the street to see if it was worth purchasing. The meeting took place after I stayed awake all night working, and giving myself just under two hours of sleep before I had to get up for the meeting. I feel I was looking and feeling my best, bleary eyed, stumbling, mumbling, I somehow communicated my feelings through a mixture of spastic gestures and slow grunts that I wanted to buy it. I handed over a pile of uncounted cash, grabbed my new friend and made plans to dismantle it and rebuilding it to a workable piece.

On my way back from the banjo purchase, I noticed an old pair of work boots sitting along side of the dock. They didn’t have any laces, were worn and scuffed, and completely alone. I vowed to return later, to give them their proper respect, but I needed sleep more than I needed that picture. After catching some rejuvenating sleep, I returned with my camera, and took a satisfying picture of the boots. 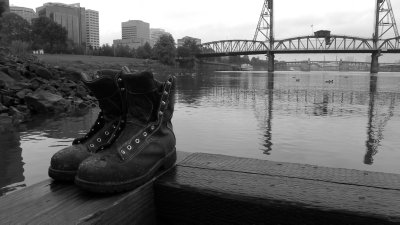 I’ve been fortunate to find satisfying photographs on my limited time off the vessel. Granted, I’m open to my environment and usually can find a pleasing scene. Take the boots. I didn’t have a lot of time to go out for a shot, but I had an idea that they would make a cool shot. I found them, just as I had seen them earlier, and took five photos of them. Upon editing, I only kept one.

“Some say it’s darkest before the dawn. This thought keeps me, moving on. If we could heed these early warnings. The time is now, come early morning.” Pete Seeger

Author’s Note: I find this particular entry very disjointed. I wrote it over a period of several days during the week I was working nights. I’ve decided to keep it as is, because I think it’s a good example of how I was thinking during the long night shifts. In the night, ideas come and go, often abruptly, then come back in new forms. 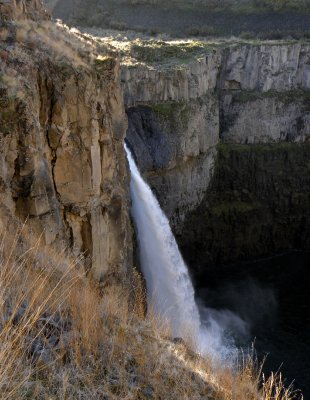 You probably aren’t asking yourself, “What’s next for our fearless adventurer?” I’ll tell you anyway. A little day hike down to Palouse Falls.

We love reading your posts! This one and last were great. Enjoy life on the boat, and be safe. Lara and I are in Florida now, so when you get off the boat and need some chips and salsa and sunshine come on down to the south.

Thanks Aaron! Coming from you two, it means a lot! Thanks for your continued support, and I hope to one day see you and meet your new little buddy! All the best!