An Aimless Jaunt Into a Downtown Park

I had a couple of hours on my hands while this morning, and I thought I would take advantage by going ashore to go for a mini -exploration of the city of Portland, Oregon. To fully explore a dynamic multi-layered city such as Portland could take months or years to do it properly. I had only two hours. I decided on an aimless approach, wandering north into downtown, more or less wanting to see what I could see.
I walked north along the Willamette River, watching the river traffic, flocks of birds, joggers, walkers, bums, bikers, and scenery. I turned west into the downtown area via Salmon Ave, and made it about a block before I saw a beautiful green park that piqued my curiosity.

The park was three square city blocks, neatly contained in a perfect grid of concrete thoroughfares. Inside the grid, a pleasing natural space was composed of towering trees, green grass, a plethora of wrought iron benches, and two statues. Everything was covered in a thin layer of bright yellow leaves that had fallen from the towering trees. The leaves had a steam rolled flatten look, softened with water and compressed. 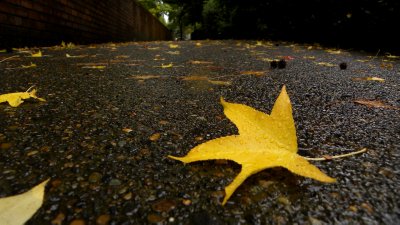 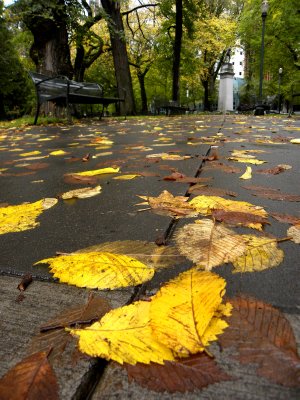 The park had a few statues in strategic locations, one commemorating veterans and their battles, an elk, and one saluting the pioneer spirit. I like statues. I like art that is meant to last for a long time. I always thought it would be cool to carve up a huge rock in a random spot in the woods-scratching in symbols, and numbers (which would be meaningless) for future generations to ponder. It would be my lasting symbol of my unique brand of weirdness. Picture the Maois of Easter Island. Plus, I like the idea of annoying archeologists long after I’m gone. 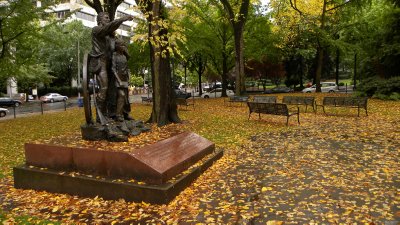 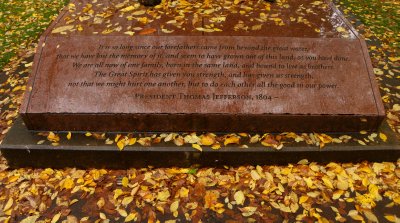 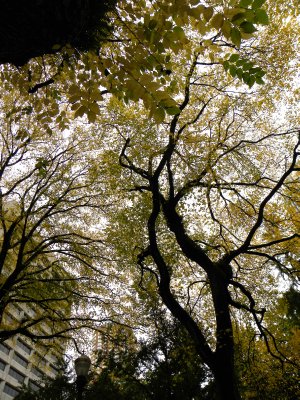 A heavy mist began to fall, and the few people around picked up their pace and walked faster to their destination. I didn’t have one, so I walked slower, and tried to find appealing compositions. I like rain, and it deepened the mood nicely: A wet autumn afternoon in an oasis of green. The city was ever present, but city parks aren’t meant to be deep wilderness. To me, they are a place for recreation, relaxation and respite. Parks are a reminder to city folks that nature has an important role in our lives. Who doesn’t feel better after spending some time in a city park? My primary way of judging a city is by its green space and parks. 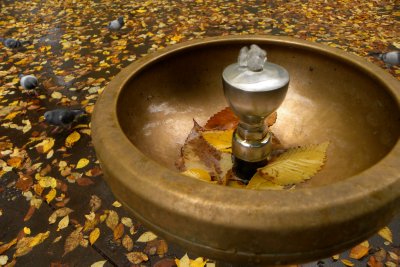 It felt good to get off of the boat and act like a normal person again. There isn’t a lot of room to roam on a boat, and I enjoyed stretching my legs on the earth. To celebrate my “grand day out” I bought mocha, a bagel, and a cinnamon roll to eat later on the boat. A small gesture towards recapturing my freedoms, but welcome all the same. 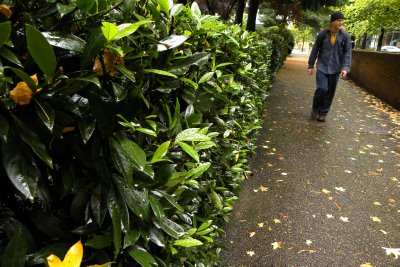 I was looking for a good quote about city parks, and I found this one. It doesn’t really go with my theme, but it made me laugh.

“I hate small towns because once you've seen the cannon in the park there's nothing else to do.” ~ Lenny Bruce