A Celebration Of Autumn: The Foliage, The Sounds and The Tastes Of My Favorite Season

The northern forests have once again succumbed to charms of autumn, and so have I. Autumn is the equivalent of a grand finale in a fireworks show for leaf producing trees. In fact, the whole region has been in the grip of autumn since late September. It starts slowly, the hot temperatures of summer begin to temper and cool, especially at night. The cooler air temperatures begin a chain reaction in the hardwood trees; their life flow of sap slows and stops. With no more nutrients flowing through to the leaves, they turn color and die. Utah Phillips, that great American storyteller and folk hero, used to tell us about a whiskey called Autumn Leaf, “You’d take a snort, turn color and fall.” It’s not an immediate process; the “fall” often takes several weeks depending on temperatures, rainfall, wind strength and type of tree. 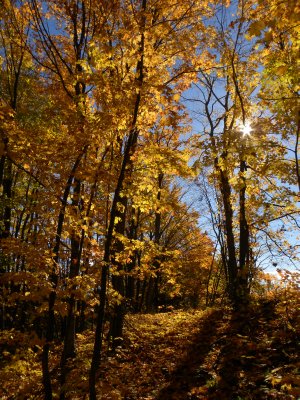 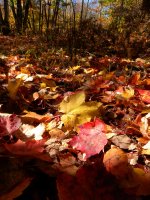 Autumn is the Yang to Spring’s Ying. A subtle reminder that all that lives will eventually die. But what a send off! What a great final show. If you knew the end was near how would you want to go out? The forest has collectively chosen to go out with a bang. It makes an awe-inspiring farewell, a celebration of life in vibrant colors, textural sounds, earthy smells, and ripe tastes before death. Autumn is a good reminder to pay attention to all of your senses, as each will find a satisfying meal. 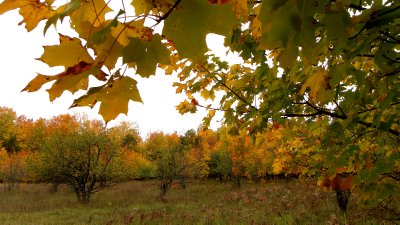 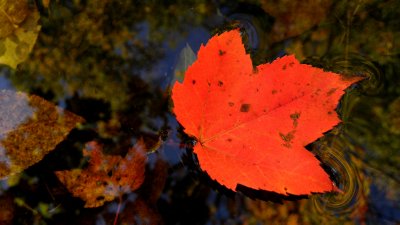 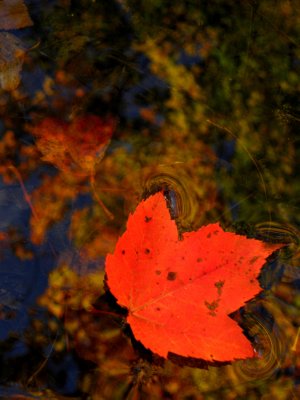 The visual feast of the vibrant varieties of autumn leaves is what I think of most when I think about Fall. In Michigan’s Keweenaw Peninsula, the multitude of hardwood forests, mostly maple, oak, birch and aspen make for a pleasing display for the eyes. For roughly the last two weeks, I’ve spent at least part of my day wandering about the fields and forests, taking in the variety of colors. I especially like red leaves, as they aren’t as common as yellow and orange were this year. I don’t know if leaves vary their color from year to year, or if certain trees always turn the same color. A dendrologist could probably answer that question. 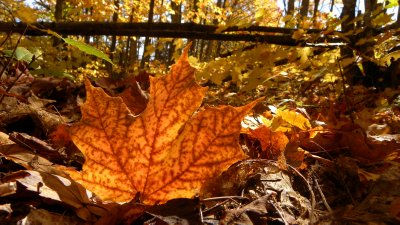 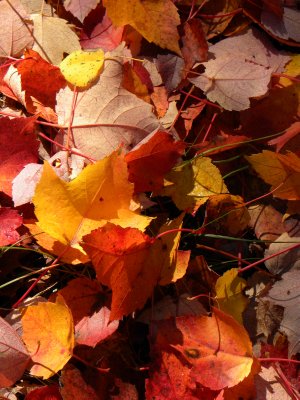 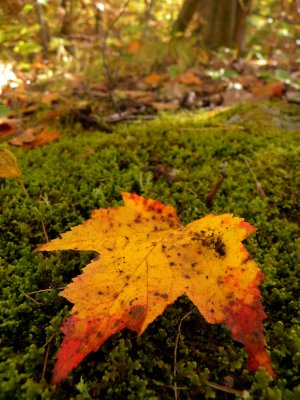 This year, the trees on the edge of the old farmer’s fields hit their apex of color before the main forest. It made for some likeable compositions, and I was lost for hours at a time composing the trees with my camera. 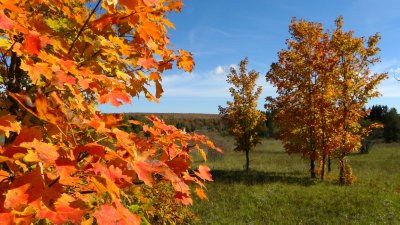 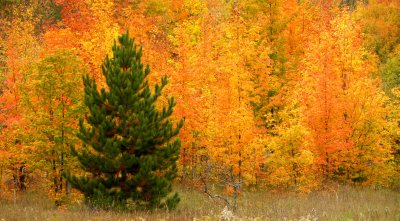 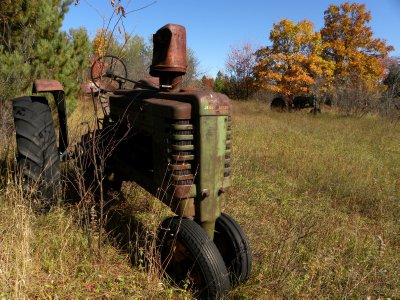 I was walking along the banks of the Traprock River, when I happened upon one of the more beautiful phenomena that I’ve seen this year. Leaves were falling from the trees directly into the water, and in doing so, became small color full leaf shaped canoes. The stream moved them at a variety of speeds through the dark tannin, root beer colored water. Some of the leaves floated by underneath, some on top, others joined other leaves to make a raft, then abruptly would spin away and change partners like a square dance. I was mesmerized. I could’ve watched this “dance” all day. 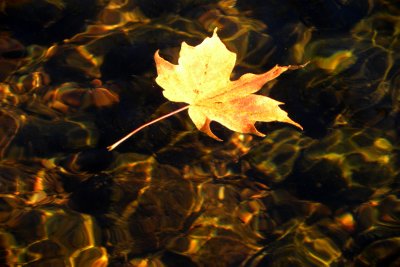 The sounds of fall are much like a symphony composed of many different movements, using different techniques to coax sound from leaves. I like listening to the leaves land as they fall from the tree. It’s not long before a thick blanket of dry leaves collects on the forest floor and with each new leaf that falls onto it, a soft crunch can be heard.

Leaves are more or less a wind instrument. The gusty winds of autumn use the crispy leaves like giant maracas, shaking them for a time, then letting them settle down once again. The wind makes soft noise through the forest as well, a pleasant white noise to which the rustling leaves play over the top of.

By late fall, most of the leaves have fallen, and the thick carpet of tinder dry brittle leaves becomes a terrific cacophony of crunch. Walking through the forest is pleasurable, a nonstop din of crunchiness that overpowers all else. The only sounds the ear can concentrate upon are your footsteps. I like to shake it up, and shuffle my feet, then jump up and stomp, kicking a couple of times, and taking exaggerated steps to keep the rhythm going. Yes, autumn jaunts in the woods are good for the soul. 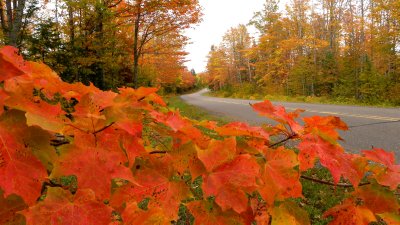 Autumn also has its own array of earthy aromas. A fresh pile of dead leaves smell great. I love the smell of hot brown pine needles that have been baking in the afternoon sun for several hours. The tannin-filled rivers smell acidic and earthy, but not unpleasant. They smell as a river should. Perhaps my favorite smell is that of the freshly baked apple pie cooling on the counter. This makes me think about the tastes of Autumn. 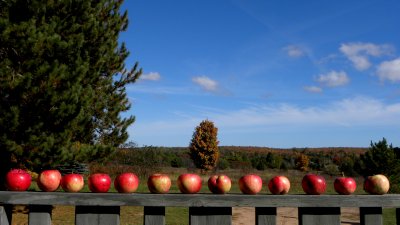 My favorite taste of fall, is that of the apple. Apples fresh off the tree are delicious, and can be used in a variety of ways. I like baking apple pie with my apples that I pick. Is there anything better than a fresh piece of warm apple pie, with its gelled apples and cinnamon, sandwiched in a flakey tender crust? I think not. My aunt and uncle have an apple orchard, from which they use the apples to make cider, possibly the world’s finest. It’s so very fresh and pure, that my sister once said, “It’s like drinking an apple.” My mom makes applesauce out of some of the apples, mostly the late august yellow variety. When the yellow apples are ripe, it’s a good sign that autumn isn’t far away. 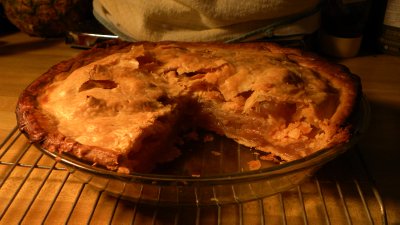 Through the ages, many civilizations held festivals in a salute to the harvest of fall. I think the autumnal equinox should be celebrated. To do it properly, a long walk through the forest would be a good start. Let your senses do what they do best, and enjoy the whole scene with each of them. Follow that with a fresh piece of apple pie with good cup of coffee, to get a taste of autumn. Then a bonfire under the inky black star filled skies, listening to the fire pop and crackle, accompanying the wind rustling the leaves of the forest. This would make a fitting end to a day spent in celebration of autumn, my favorite season. 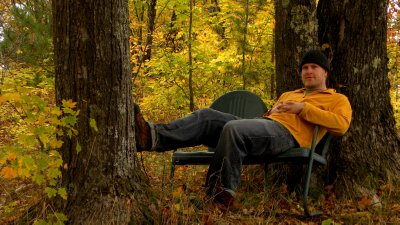