On The Way To Southern California

A Return to Duluth, Travel Directives, and My Views on Flying

I awoke to the sound of wind and rain lashing the window of my friend’s third floor apartment. I was drowsing happily on the floor, acknowledging that a good rainstorm was brewing up, but not caring. Then a tremendous, sonic boom of a thunder crack hammered a resounding blow on the city, and I found myself levitating in the air from the prone position. As if, to be efficient, the storm put all its energy into that one thunder clap. ”One show, good-bye.”~ Steve Martin.
I landed back on my sleeping pad, and felt the hair on the back of my neck stand on end, my heart beating harder, momentarily shocked, but quickly settling down allowing me to return to my slumber. Thunder might possibly be the best alarm for waking up than any other device. Too bad you can’t set it… 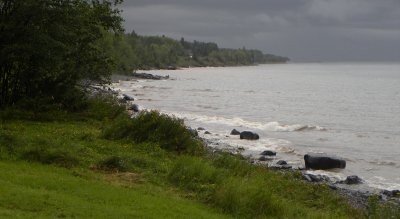 The rain continued through the morning, even after I awoke, was dressed and headed out to find some breakfast (a cinnamon roll, and mocha from the New London Café). One of my favorite parts about returning to Duluth is haunting my old haunts. I like revisiting the good café’s, parks, and hang outs that I used to frequent while I lived here. I parked at one of my favorite lakeside picnic areas on the scenic north shore drive. I ate my roll, sipped my mocha, listened to the rain hammer on the roof, read, wrote in my journal, and played my ukulele for several hours. It was a very good morning. A fog bank rolled in, blanketing the shoreline in white mist. It made for some interesting scenes of the lake, and I took advantage with my camera. 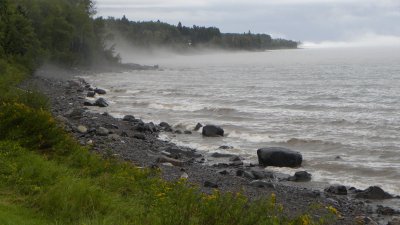 I was to meet my friend at 4:30 in the afternoon, at his apartment in the western Minneapolis suburb of Plymouth. I figured I would be making a few stops along the way; a friend of mine had given me contractual directives to find a park, take a picture of it, and to get lost somewhere along the way. The first two directives weren’t hard to accomplish. I found a perfect park in the small town of Bruno, Minnesota. It had one of the coolest teeter-totters I’ve seen in a long time, and a swing set. I decided to eat a small lunch, and play the uke for a while. The last part of her directions was harder. She told me I wasn’t allowed to use maps to find my way down to Plymouth, that I “should let the world guide me for awhile.” I didn’t have a problem with this, I’m not addicted to maps, and I love being spontaneous. However, I’ve driven almost all of the roads between Duluth and Minneapolis, and I knew where I was going even if I didn’t use a map. To compromise, I decided not to use freeways. This was an easy decision anyway, as I mostly despise driving along the dull, fast track routes that criss cross the United States. 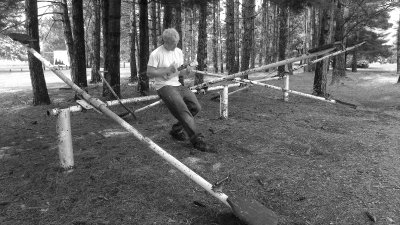 I decided that I liked being given travel directives. I enjoyed seeking out random objects and towns such as the swing-set. It’s kind of like a scavenger hunt in a way, and I’d certainly welcome more “challenges” to my travels if any of you reader(s) have any suggestions. Perhaps you could say something along the lines of, “Find the city park in Havre, Montana and go slack lining.” Alternatively, maybe, “Find the best BBQ in Saint Louis.” Or possibly, “Come to my house, and I’ll bake you some cookies.” 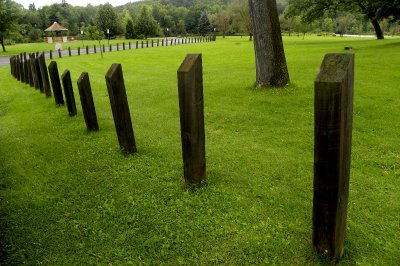 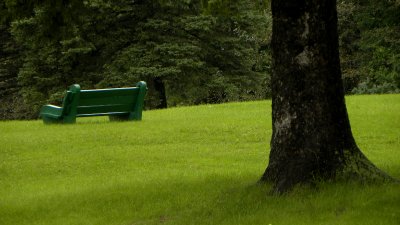 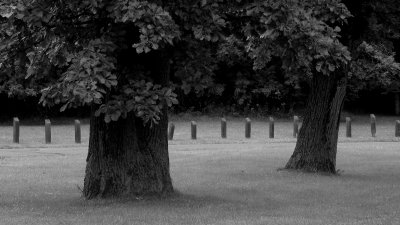 I enjoyed the ride, singing aloud to my music, jamming with my groove. I made one stop to watch some swans forage in a roadside pond for a while, but other than that, I stayed the course and made it to my friend’s apartment at exactly 4:30. I have a weird ability to arrive exactly on time, without trying.

To be sure, I haven’t flown that much in my life. I’ve flown the coop at age 20, striking out on my own, and I’ve flown three other times across the US. It’s still kind of a novelty to me, but I’ve noticed the more I fly, the less of a novelty it becomes. However, I’m not jaded yet. I still like people watching in the terminal, imagining the vignettes of the more interesting travelers that walk by.

I was sitting on the floor in the terminal in San Francisco when one of the many politely-robotic futuristic voices that make announcements over the intercom in the terminal, asked: “Would the person who left there hearing-aid by security to please come to the information desk at the beginning of E concourse.“ I waited. The same announcement came on three more times. I mused that the person, who’s missing their hearing aid, probably couldn’t hear the announcement. A regular Catch-22.

I like having a window seat. I’m that guy, who stares out the window for most of the flight. I dig watching the scenery far below, and I like the uncertainty of take-offs and landings. Watching the earth rush by, as you get lower and lower to the ground with no hint of a runway in sight is always a battle of conflicting thoughts. “Hmm. Nope. I can’t see a runway yet, but the freeway appears to be about 50 feet below us. This ought to be interesting…”

On takeoffs, you find yourself strapped into a huge metal rocket, buffeting and bouncing along the runway as the painted stripes of the runway blur into a continual line. I can’t help but think about the brake systems on a plane this large. What if… How the hell can they stop this thing? At that point, there is nothing you can do about it anyway. “You made your bed. Now sleep in it!” I’m not scared; I’m just contemplative when the situation is out of my control. I trust the pilots, and there haven’t been any problems on any of my flights.

My flights were uneventful. I landed in the hot southern California night tired, and a bit woozy. It had been a long day and all I wanted to do was eat, take a shower, and go to sleep. All of which I accomplished in short order.

Before I fell asleep, I contemplated what the week would hold for me. I was here in southern California, and the next day would begin my explorations of this famed locale. I wanted to give it a fair chance, to be open minded to the southern Californian lifestyle. I wanted to see how I would fit in. On paper, I wasn’t sure if I would like it. I’ve heard many stories about the negative sides to the region, but I try to never let other people’s views influence my own perspective that comes from real experience. I wanted to see some of the sights that most of my friends and relatives would never see. I was getting excited! I was in my element once again, and ready to paint the next blank canvas of life experiences in unknown territory.

Find a yarn shop: go in and say, "take me to your finest cashmere" Pet the yarn, think of all the lovely things your sis could make with it. Find your way to Kenosha to pick up pasty and cookies made for our favorite Unca Tom.