Finding Hidden Suprises in America's Heartland: A Study in Yellow

For the first time in my life, I found mountains uninspiring. I drove right by them, indifferent to their snow capped peaks, their green petticoats of pines, the gushing white waterfalls falling from their shoulders. I was surprised by this. Normally, mountains are my soul mates, my inspiration, and what I come out west to see. Not this time. I spent 5 days driving through British Columbia, passing by some spectacular ranges from the coast down to Revelstoke and Glacier National parks. I looked at them, but felt no urge to hike, climb, or even give them much thought.

When I reached Montana, I drove right by Glacier National park without a second glance. I didn’t have much interest in sharing the park with hundreds of slack-jawed tourists, decked out in their “Ranger Dan” tan outfits and sun hats. Maybe I was getting bitter. A sign informed me that the “going to the sun” highway was seeing delays from road construction. This was the one draw for me on this trip, to drive my old van over one of the most spectacular roads in the northern US, but I didn’t want to sit in a stifling traffic jam in the mid July heat to accomplish that goal.

I continued driving eastward on US highway 2, a road that I have almost driven from coast to coast (in sections). In northern Montana, this highway is known as the “hi-line” and for me it was the most direct route to my goal: Lake Superior. Leaving the small town of Browning, I settled into the driver’s seat and got ready to cross the Great Plains. 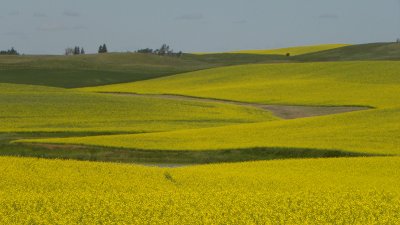 To some, driving across the endless plains is the worst punishment in the world. “It’s so damn boring!” is their battle cry, and they waste no time in getting across. They keep the pedal to the metal, 80 miles an hour, cigarette butts flipped out the window every 15 minutes. If you ask them how the trip went, they’ll invariably answer, “Fine, except for the plains.”

I guess I’m just different. I love driving over the prairie. I love being able to see the horizon in every direction miles and miles away. I like the rolling hills of grass. I like trying to contemplate the vast distance that makes up the plains. An ocean of grass, stretching for roughly 500 miles east to west and 2000 miles north to south. It’s a huge natural feature. 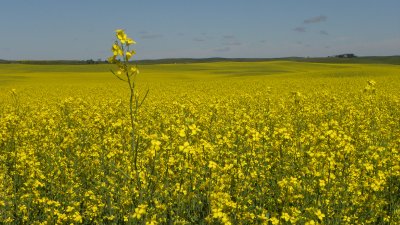 I spend a lot of my time looking out the window, trying to imagine what it was like trying to cross on horse back, or in a covered wagon. We have it easy. Paved roads are quite comfortable compared to what the pioneers faced. Sometimes I feel like I was born in the wrong era. I’m old fashioned. I’d actually like to try crossing the plains on horse back or by walking. Thing is, there are a lot of fences and roads these days. One must have access to the land, as well as keeping the livestock in, and the trespasser out. 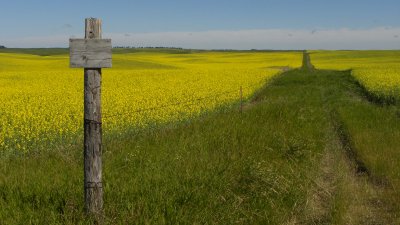 This crossing was a surprise. I’d never crossed the plains in July before, and I was surprised to see how vibrant and full of life the plains were. Long fields of thick green grasses were dotted with wild flowers. The Cottonwoods were standing tall and proud along the riverbanks. They offered a traveler a lot of cool shade to escape the intense glare of the sun. Many of the fields had already been cut and the hay was already rolled in in round bales. There were acres of fields and pastures planted with crops. They all appeared healthy, and I would predict a good year for farmers.

While driving, I enjoyed watching the livestock gorge themselves on the green grasses as I drove by. Fat cows stared stupidly at me while chewing their cud. Of course, you would probably look at me as if I was crazy too if I drove by you and bellowed out a long “MOOOOOOOOOOOOOO” at you. You have to do something to entertain yourself out here.

I have an affinity with dandelion heads. I like the puffy gray-white heads that are just waiting for a big gust of wind to release them from the stem. If I was to go bald, I’d like to have it happen like a dandelion losing its seed: One big gust of breeze and 10 seconds later I look like Terry Bradshaw. Anyway, I enjoy helping the flowers reproduce by occasionally plucking a stem and blowing the soft white parachutes into the air. 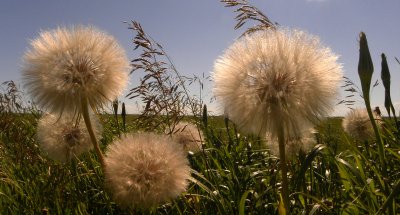 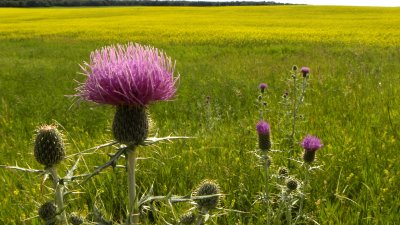 I have newfound respect for North Dakota. What a vibrant state! There are whole fields of yellow and purple flowers in bloom. Acres and acres of bright color stretching off to the horizon, an organized visual masterpiece of yellow, green, purple, bright blue, and white. It was amazing, and completely unexpected. I’ve never been here in July. Whenever I had visited before, the fields were all sun baked tan, wind swept and dead. I always wondered what it would look like in the growing season, and now I know-it is beautiful.

I would bet that young train engineers pictured a scene just like this one as they daydreamed about operating a train when they grew up. 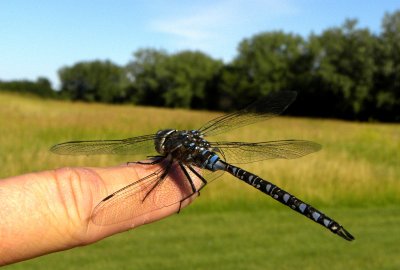 Graham’s Island State Park that is located on Devil’s Lake in the northeast part of the state. I was amazed with the variety of birds that make this park their home. The birds are constantly singing, whether they are the raucous laughing gulls, warblers, sparrows, red winged black birds, or other varieties. My arrival coincided with a feeding frenzy of dragonflies. They were out in force, gorging themselves on particular flies that were going through its own hatching cycle, amassing themselves in the thousands. The dragonflies flitted around on patrol through the day, but when dusk had settled in, they REALLY began to chow down on the flies. It was hard to estimate, but over my 60 ft by 30 ft campsite, I would estimate several hundred dragonflies circling around. Now imagine the whole park with the same density of dragonflies zipping overhead eating flies. It was eerie. The only sound was that of the low buzzing of fly wings and of dragonflies. 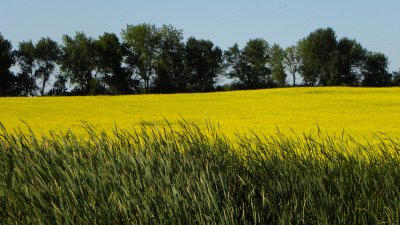 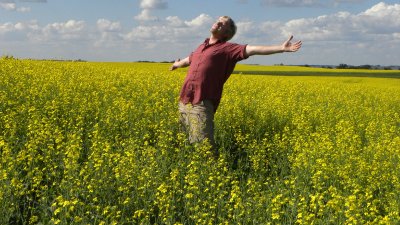 My crossing of the plains was the highlight of my trip. I spent three and a half days crossing the wide expanse. I will gladly come back in July. The sights and sounds of the plains during the growing months are really something to see. So don’t judge a book by it’s cover, come visit the northern plain states and see its subtle beauty for yourself. 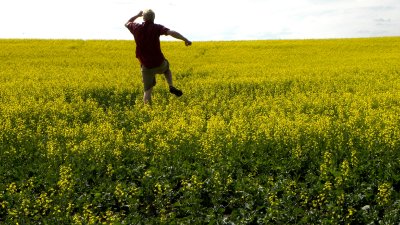 As my siblings ask themselves while they peruse the photos of my travels."Oh Brother, Where art thou?"

I've got a lot of deer around my house, I MOOO at them whenever they're in the road or the yard. The appreciate it a little more than cows, and usually display their appreciation by running in the opposite direction really fast.
That reminds me: if you haven't read, "A Heartbreaking Work of Staggering Genius" by Dave Eggers you should. There's a good mooing at animals part in there. Also, you should check out his website (mcsweeny's), it has some good writing. Nice pictures of the plains, by the way.

I haven't read Eggers book, but I'll look into it.. Seems to me he's been recommended to me before, possibly by you. Yeah, I didn't expect the fields to offer so much photogenicness, usually they are rather bland.