Reflections on the best vehicle I'll ever own.

Rolling eastward over the vast western plains of America, I find myself quite excited as to what is going to happen within the next 60 seconds. I’m not sure when it’s going to happen, and my anticipation reminds of me of Christmas eve’s of my youth. Then my van’s odometer clicks over. In an instant it reads 200,000. I made it. My van made it, a major milestone has been reached, and it is cause for me to stop and celebrate. Of course, I take a few photos. 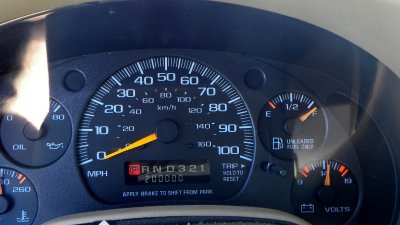 This may not seem like a major life accomplishment to you, but it is for me. This number means a lot to me, a reminder of how far I’ve traveled in the last 7 years, and how much I’ve grown because of those miles. 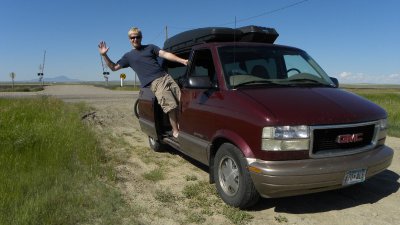 Some History.
In the fall of 2003,I had totalled my car in a near head on collision. It wasn’t anybody’s fault, she pulled out in front of me, and I couldn’t react in time. Accidents happen, and it was my turn. The end result is that it left me short of a vehicle, and I needed to purchase another one. I was pondering what kind of vehicle I wanted, and it came down to a car just like my last one (a 94 cutlass supreme) or some sort of van. I didn’t know why I wanted a van, I just did. I guess I had visions of driving around in a big van, hauling all my friends, or just having a lot of room to carry my toys.

Later on in that week, I tried to pack my camping gear into the back of my sister’s car. It was a struggle. My backpack was too big, and I really had to cram to get the trunk lid to close. Right then and there, I knew what I wanted, and so began my search for a van.

After a lengthy search, and many test drives, I finally found the van I wanted. It was beautiful, and had only 42,000 miles on it. I signed my name to 90 pages of legal speak that documented the fact that I now owed the bank a lot of money. I only lost one night of sleep over the decision. I reasoned that it was only money I didn’t have, and now I had a van!!!

I hauled my friends around (8 of them at a time). I decorated the inside, I put in a carpet, some plants (a mistake), and generally was quite happy with my purchase. That winter, I was laid off from my job for the first time. Not being one to complain, I immediately made a plan to go visit some friends and go skiing out west. I went all the way out to Washington and Oregon for the first time, I skied, I hiked, I lived out of my van, and I learned that I had bought the ultimate travel tool for the United States. I was becoming addicted to travel, and I was happiest out on the open road. I loved driving around the country and seeing what was there was to see down countless empty highways.

I look back at my first trips in the van and shake my head. I didn’t have a clue on how to travel. I was smart enough to take out the back seats, but there was stuff everywhere in a jumbled stack all over the back. Gradually, I got better at travelling. I developed a system, built a bed and storage area, added toppers to carry more toys and to save space. I didn’t drive as far everyday, I slowed down and really got into living the slow life. I brought my girlfriend (at the time) to share in the experience. I stayed a lot at state parks, national parks, national forests, and motels when I felt like it. The whole point of working was to earn enough money so I could travel all winter. I became a vagabond.

The question I get asked the most is, “Where is your favorite place in America?” It’s impossible to say. I’ve found good things to every state I’ve been to. I’ve been to all of the states, except seven. I’ve also been to four Canadian provinces. Naturally, I have states that I visit more often than others (Montana, Washington, New Mexico, Minnesota, Idaho and Denial to name a few), but I know dozens of little pieces of paradise all around this country, and they all are special in their own way. 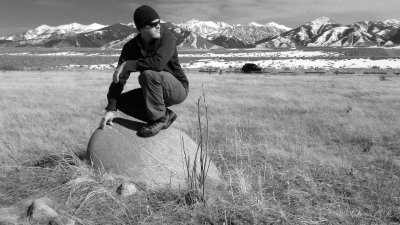 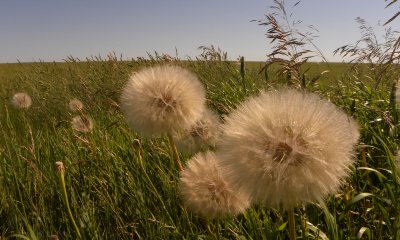 Not all the roads I’ve been on have been good roads. I’ve driven through some nasty storms, I’ve seen lightning in a blizzard. I’ve had rocks bouncing off of the road along side of me as I drove over a mountain during the night. I’ve seen taken short cuts that have led to long cuts. I’ve been lonely, sad, happy and mad (though usually only in big city traffic) and every other emotion you can have. I’ve broken down in small towns and bigger cities. I’ve slid sideways down the middle of the road on black ice at 40 mph. I’ve been stuck in the ditch on several occasions. I’ve locked myself out of my van once. I’ve wondered how much money I had left on numerous occasions, and have eaten Dorito sandwiches in a pinch. I’ve had a great time in this old van of mine, and I wouldn’t trade any of my experiences for anything. Hmm. Maybe one thing… 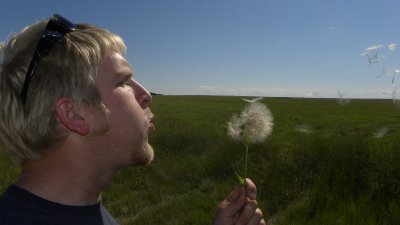 I’m writing this in the small, quiet town of Chester, Montana. I like Chester. Besides the trains that pass by every ½ hour or so, there isn’t much going on. Roving bands of kids seem to run the town. Most are on bikes, some are walking. They are all outside, late into the evening, hanging out, throwing a ball, playing in the playground. I hear them yelling and shrieking, and it is music to my ears. It’s the sound of summer in small town America. Refreshing.

Chester lets you camp for free at it’s immaculate city park. Beware of the sprinklers. I didn’t heed the warning signs until too late. I was jamming on my banjo, oblivious to the time when sprinkler system two went on at it’s scheduled time. Did you ever see a banjoist leap 4 feet in the air from a sitting position? Chester has. I bet my neighbors had a good laugh over that one.

The sun has set, cool breezes are blowing through the open windows of my van. It’s getting dark, and a quarter moon hangs low over the city park. In the west, the last tendrils of orange hang over the horizon. The only sound left is that of the kids, staying up late, cursing, screaming and having fun. Hopefully, it’s past their bedtime. 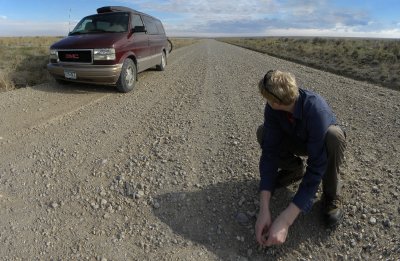 Congrats on the 200 milestone. It's fun to read about your travels . . .may your van take you to many more happy places. We miss you in AK.