The last leg of the drive began when we crossed the border into the province of British Columbia (BC) in Canada. My destination was Prince Rupert (PR), the small port city way out on the west end of highway 16, some 800 plus miles from where we crossed the border. I had five days to get to PR, which afforded me the luxury of breaking up the long drive days. Last year, I drove that distance in two long marathon driving sessions; going from the border to Prince George (PG) (490 or so miles) and Prince George to Prince Rupert (449 miles). I didn’t want to have to do that again, and besides, there is a lot of BC that I wanted stop and see. Two of my first goals were to hike up the Second Peak trail in the Chief Stawamus Provincial Park, and I wanted to drive the Sea to Sky Scenic Byway, also known as Highway 99. Beyond that, I didn’t have many plans, other than to make my ferry in PR.

The Sea to Sky Scenic Byway begins just outside of Vancouver, and runs north along the coast passing through the scenic towns of Squamish, Whistler, Pemberton, and Lillooet, before intersecting with Hwy 97 which is the main north/south thoroughfare in central BC. The road begins by following the rugged and picturesque coastline up to Squamish (The Sea), then it begins to climb steadily higher through Whistler and Pemberton. After Pemberton, the highway climbs high up into the craggy, soaring coastal ranges of BC where the road meets “The Sky.”

Back in February, I had made my first visit to Chief Stawamus Provincial Park. On that visit, I had climbed the lofty First Peak trail, the first of the three “chief trails” (see Vancouver Part 3). I really enjoyed climbing up to First Peak. Upon summiting, I was enthralled with the views, one of them being the slightly higher Second Peak. I vowed that I would return to climb it in April, on my drive up through BC. 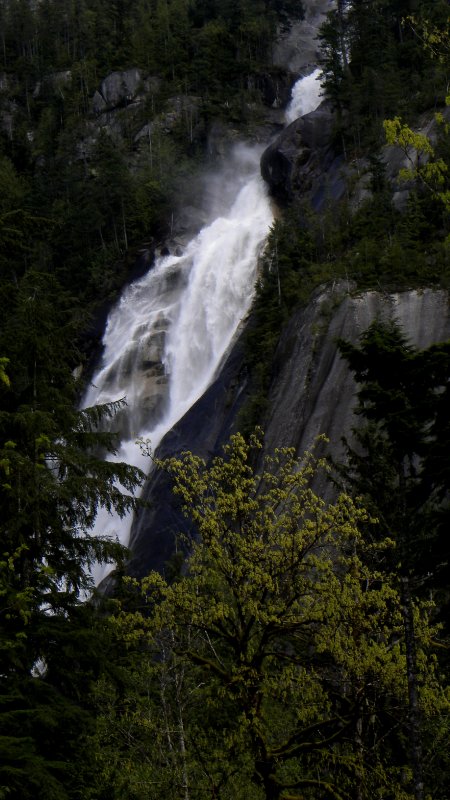 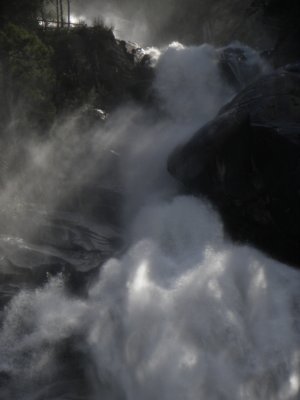 So now it is April, and here I am just south of Squamish once again. I’m about to fulfill a promise to myself. It was a beautiful spring day; the sky was blue, the leaves on the trees were budding and bright green. The white granite cliffs and faces of the surrounding mountains dominated the views. It was breezy and cool with gusts from off the ocean. I was gazing up at the majestic and powerful lower Shannon falls. The mountainous countryside of coastal BC drops down to the ocean abruptly. Indeed, there are sheer cliffs that drop down from the sides of mountains in dramatic relief. I haven’t looked at a topographic map of this area, but I imagine the contours of the map really challenged the cartographers who had to draw them. Shannon Falls is the result of this radical topography. Melting water from high up in the mountains follows the easiest course down through the mountains low areas, then it falls 1,105 feet over the face of the sheer granite cliff before it regroups, and meanders its way to the ocean. The falls were spectacular, and a lot of people were out to see them. I was struck at how well dressed most people were while viewing the falls. I saw people wearing very nice clothes, smelling of perfume and after shave as they hiked along the trail to the overlook. Is this normal in other countries? When I’m out on a hike (or anywhere for that matter), I’m wearing my zip off adventure pants, comfortable adventure shirt and solid hiking boots. I don’t even own clothes as nice as these people were wearing. They had class, I’ll give them that.

The hike up to Second Peak was a grinder. Hiking up the trail was hard, probably the toughest hike I’ve been on this year so far. It IS a very demanding trail, but I was struggling with personal physical issues. I hadn’t gotten a lot of sleep the night before, so I was already tired. On top of that, I was still fighting the last elements of a sore throat, so I wasn’t breathing as smoothly as I normally am. Instead of steadily climbing up the trail, feeling good, I was steadily climbing up feeling bad. I had to stop to catch my breath more several times, before continuing the grueling climb.

It was a gorgeous trail. The trail begins by climbing up a steep and rocky boulder strewn path. It runs along a nearby creek which falls down the same incline in a long set of tumbling falls. The roaring white noise of rushing water blocks out all other noises except for your breathing and footsteps. It’s easy to get into a rhythm during this section, letting your mind wander as it will. The trail splits, allowing you the choice between hiking to first peak or second peak and I chose the latter. The hiking became climbing, as the trail began ascending steep, slippery rock chutes. There were cold, steel chains to grab onto to aid the climb, but I chose to make it more challenging, by using only natural foot and hand holds for aid. I love this type of hiking, a scramble, using my whole body to get up to the top of the rock. It reminded me of Joshua Tree National Park (see Joshua Tree On My Mind), though the environments are completely different. 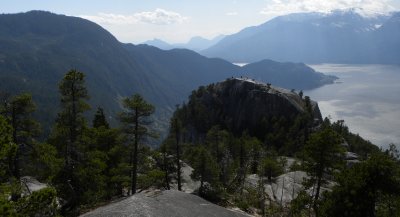 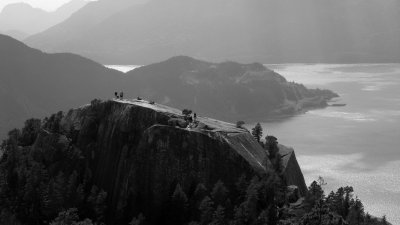 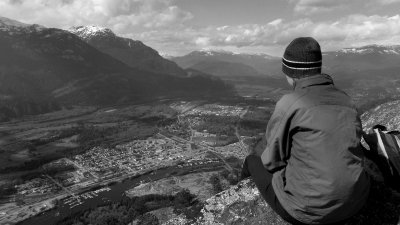 After the technical chutes, the trail opened up onto a grippy, sloping granite slab that I ran up. I had left the trail, as it wasn’t necessary anymore. All that was left to do was keep going up to the high point. I like following my own path. Upon summiting, I looked down at the town of Squamish and back south towards First Peak. There were several groups of hikers that were doing the same thing I was doing, gawking at the amazing scenery, putting on warmer clothes, taking pictures, eating snacks, and taking long pulls from their water bottles. I liked Second Peak better than First. I loved framing First Peak against the distant coastline. The furthest mountains and islands were pale blue, and each successive jagged band of terra firma was darker then the last. The protected ocean bays were flat and blotched from the wind gusts that blew over it. The sky was light blue looking toward the sun, and chains of cumulous clouds were rolling by changing their shapes in slow motion as they passed. It was a magnificent reward for my labor. Next time I visit the Squamish area, I’ll climb Third Peak. Just to round out my education.

After couch surfing in Whistler, I continued my journey along the Scenic Byway. I stopped briefly in Whistler Village to check it out the popular skiing destination base camp. I wished it was mid-February, because it would have been an easy decision to spend the day carving the powder with my skis. The Whistler/Blackcomb Ski areas are some of the most popular mountains in North America, a kind of Mecca for ski bums like myself. I talked to the owner of a local ski shop, he was very interesting, knowledgeable about the area, and a good example of “Canadian nice.” Canada has an admirable reputation of being nice, and I can tell you it’s true. 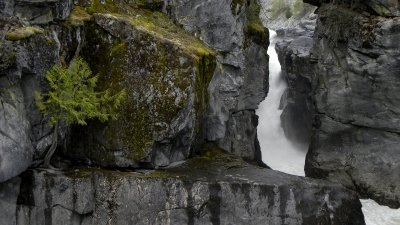 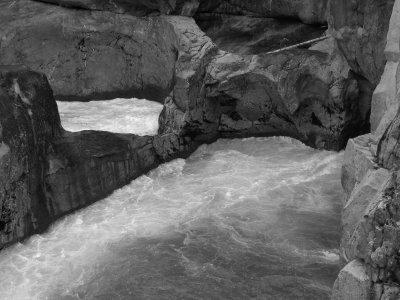 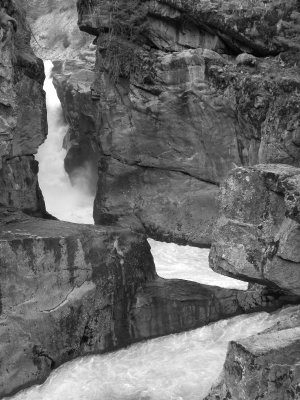 I ate breakfast at Nairn Falls Provincial Park, near Pemberton. Then I hiked the short distance to the viewing area of the falls. Nairn falls is a good example of the enormous power of water. The Green River narrows and has gouged its way through the ledge rock, reminiscent of a hot knife through butter. The upper falls are narrow, cutting deep into the rock, almost hiding themselves. The overall falls (both sets) drop about 180 feet. Then the churning, gritty water continues down stream through a narrow rock channel, zigzagging along. It disappears under rock bridge where two carved potholes have met under the water. Finally, it follows through the thirty foot wide rock chute before it falls over the second set of falls in a thunderous barrage of white water. Impressive. 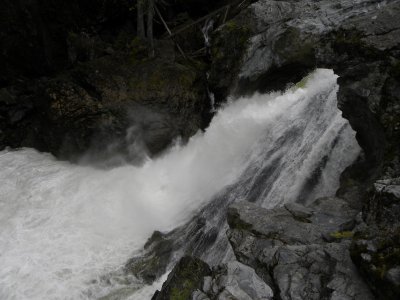 My drive over the coastal mountains from Pemberton to Lillooet was a mental tug of war between anguish over what these steep and winding roads were doing to my old van, and being completely engrossed with the beautiful mountain views that surrounded me. These are some SERIOUS mountain roads, probably among the highest and steepest I’ve ever crossed. It began with a long climb up the pass, where my van could comfortably climb at 30 mph. It’s high whine kept reminding me that if I wanted this van to last, I should treat it better. After topping out on top near Duffy Lake, I descended into a long series of steep hills, with wooden one lane bridges over the beautiful Cayoosh Creek. There were several stretches of road where the angle of descent was over 11%. I estimated at least 6 miles of these brake melting pitches. Down, down, down we went, my ears refusing to pop right away, so my head was a sound proof room, like I was wearing thick earmuffs to dull all sound. 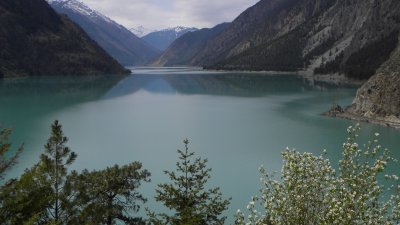 Finally, we reached Lillooet and a break for lunch, and a chance to let the van cool down. It smelled like a strong mixture of hot metal, burning rubber and molten oil. Sorry ol’ buddy. It was over, and the country side had turned dry, desert like. When I think of BC, I don’t think desert, but it is here. The high desert region is just east of the coastal mountains which steal a lot of the moisture that passes over.