Oregon and The Columbia River Gorge

The Eastern Desert, How to Coast Down a Mountain with Questionable Brakes, and The Gorge

Spring has sprung here in Oregon. The fresh light green leaves of new growth seem to be on all of the trees. The desert is filled with the strong scent of sage brush, one of the nicest aromas to be around. The cows and horses on the ranches we pass by are all gorging themselves on the fresh grass. Birds are merrily singing everywhere, completing the springtime ambiance. It’s warmer out. Daytime highs are ranging in the 50’s to the low 70’s (Fahrenheit). Night time temperatures are still cool, but no match for a down sleeping bag. It’s a great time of year to be traveling, especially through Oregon. The eastern Oregon high desert was a very pleasant landscape to drive through. We spent two days passing through the long sage brush covered valleys and climbing up and over mountain passes covered in tall ponderosa pine forests. We passed through quite a few small towns and villages, my favorite being John Day; the little town with everything you need, and nothing you don’t. We traveled on a rough northwesterly route on small two lane highways, following highways: 26,19, and 206. I wanted to see this region of Oregon I had never been through before, while catching the better parts of the Columbia River Gorge. 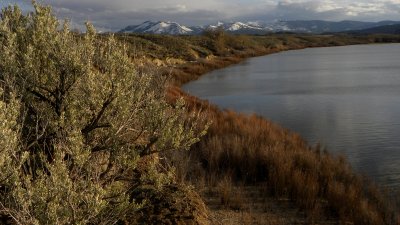 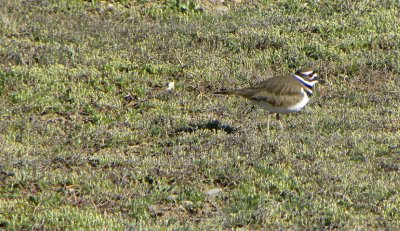 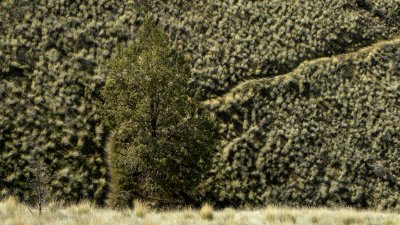 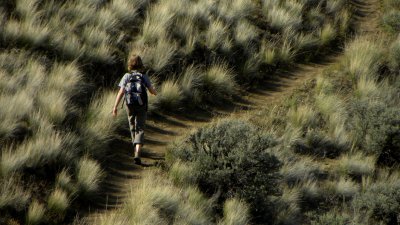 I was driving over Dixie Pass (el=5279 ft), just east of Prairie City, Oregon. As I started to accelerate coming down the far side, I eased my foot on the brake to slow the van down, when an automotive problem I had been ignoring started to demand attention. For the past half a year, I’ve noticed that when I stepped on the brakes coming down hills at higher speeds, it would cause my van to shake, causing the steering wheel to shimmy from side to side. Annoying, but not life threatening, was my assessment. I figured if I ignored it long enough, it might go away. Of course, it didn’t go away. In fact, it slowly kept getting worse. Finally, coming down this relatively high mountain pass, ignoring it was no longer an option. Stepping on the brake immediately caused the van to make a loud knocking noise, and violently rocked my steering wheel in my hand, left and right. Oh Crap! I tried shifting into lower gear, but that didn’t help, as I was already going much too fast. I had no choice. I still had to ride the brakes as we gaining still more speed. I hoped the violent bucking wouldn’t cause anything to snap. I also hoped there was a nice straight stretch in front of us to coast down into the valley. It was one of those moments where you almost have to laugh, here you are flying down a steep hill in a van where the brakes can’t really be trusted. It was almost like a cartoon. I expected my steering wheel to pop off in my hands for added comic effect. Luckily, my brakes worked well enough to slow us down, and nobody was in front of us so we could coast down into the valley. I slowly drove 20 miles into the small town of John Day where I called information to see if they had an auto mechanic. They did, and they were nice enough to take it in on short notice. I was expecting the worst, but all that needed to be done was to “turn my rotors,” whatever that means. They got it done in about 2 hours charging me 90 bucks, and the van brakes real smoothly now. So what did I learn? I learned that putting off automotive problems is a perfectly acceptable practice, and not to worry as you’ll definitely be able to coast down any mountain pass unscathed. The only side effect being, you might need to change your underwear afterward…

I think I’ve found the worst campground in Oregon. Deschutes River Recreation Area has a small campground on the east side of the Deschutes River. Situated on the far easterly edge of the Columbia River Gorge National Scenic Area, the park was a logical place to stop for the night. The campground was crowded, though not ideal, is understandable, as spring brings out the R.Vers in droves. We found a nice spot easily enough, set up camp, and settled in. Not too long into our stay, the first series of trains rolled by, maybe 150 yards away, blaring its horn as it passed by. The trains seemed to pass, three in a bunch, just to make sure you heard them. I tried to find the bathroom, but it seems there was construction projects taking place on the building containing bathrooms and all they had was on overused biffy (a biffy is one of those portable, plastic john’s usually found around construction sites). It was gross. So, I made the best of it, and what with the trains blaring all night once an hour, I didn’t get much sleep. The next morning, it was no better. Along with the trains, the park and construction workers added to the din, striking up with their lawn mowers, tractors, fence post hammers, and other machinery. I couldn’t take it anymore, I wanted peace and quiet with my morning, not the hub-bub of machinery. We fled north to the north side of the gorge and Washington. 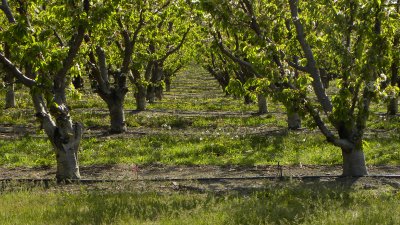 One word strikes me as being the most appropriate in describing the Columbia River Gorge, that being: Green. This color is part of every landscape and view in the gorge this time of year, and after six months of not seeing fresh growth, it makes the spring green of the gorge pop out that much more. Green covers everything; from the grass that covers the steep rocky hillsides that make up the valley walls, to the thick green moss that covers most of the trees, stumps, and rocks of the forest, to the thick spring foliage on all of the trees. I can see why green does so well here, the conditions are perfect for it. It’s a moist climate; strong ocean breezes carry a lot of relatively warm moisture from the nearby Pacific ocean. Being the lowest point river valley around, the Columbia collects all the run off from the nearby rivers and creeks. Spring warmth melts the snow of winter adding even more moisture to the climate. Add in some sunny days here and there, and photosynthesis take over creating all of the wonderful shades of green of the Gorge. 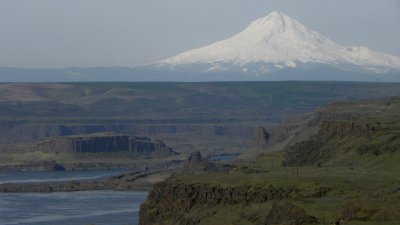 The grand landscapes of the Gorge are beautiful. It’s a huge canyon, long steep grassy hillsides with occasional rocky cliffs make up the valley walls. Rugged, eroding buttes and cliffs, formed from the passing river eons ago rise out of the land. Distant snow covered mountains can be seen, the most prominent being Mt. Hood (el. 11,239 ft.)The river itself is pretty tame; a wide slow moving lake flowing west through the beautiful country. Man has made an immense impact on the gorge. It’s hard to find a view that doesn’t have something manmade in it. There are several dams on the Columbia, creating electricity, but disrupting natural fish cycles (salmon), slowing down the natural flow of the once wild river, and polluting the scenery (my opinion). Indeed, between the roads, freeways, railroads, power lines, bridges, dams, humongous wind turbine farms, and other infrastructure, it’s hard to see the gorge as the wild place it once was. It’s even harder to take a photograph without the above mentioned “progress” entering your picture.

That’s why I like the small landscapes that make up the greater scenes of the gorge. There are many parks, trailheads, hiking trails, boat landings, and waysides that have beautiful natural features to explore. I try to visit several of these “pieces” on a given trip to help me get a better feel of the “whole” gorge. Does that make sense? I usually prefer driving highway 14 on the Washington side of the river. There are several reasons for this, the biggest reason is that it isn’t a freeway (like on the Oregon side). I can stop almost anywhere along the way, and not feel like I’m racing along. 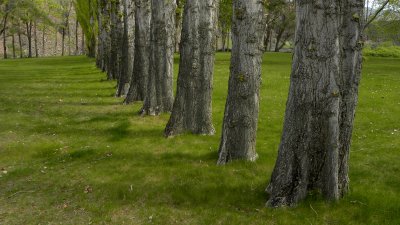 I decided to stop at all of the parks and waysides that I passed while driving west. There were quite a few areas that I hadn’t visited before, and I wanted to at least do a cursory drive through to see how they looked on the surface. At each one, there was at least one thing there to make me enjoy my visit. My favorite park was Horse Thief Lake State Park. I went for a stroll through the park’s deserted picnic grounds, admiring the groves of trees, planted in long rows throughout the park. I had the park to myself, and enjoyed sitting in the shade, catching up on my journal, while listening to the sounds of spring, occasionally gazing at my green world. Eden, came to mind. 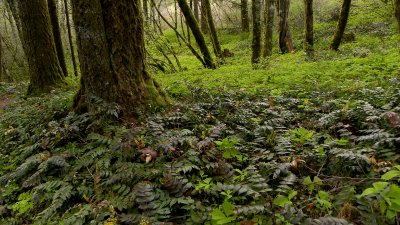 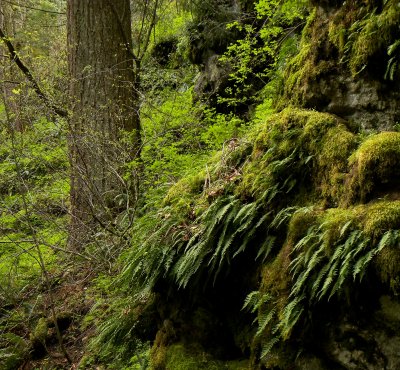 We set up for the night at Beacon Rock State Park. Beacon Rock is a towering monolith that rises 848 feet above the river. It’s impossible to miss, and has been a stopping place for travelers for a long time. Lewis and Clark stayed here, and we did too. During the late afternoon, we went for a hike to Hardy Creek Falls and Rodney Falls. It was a good hike through pine forests, with trees that grow to immense sizes. The undergrowth was thick, and green, flowers were blooming, and it was gorgeous. 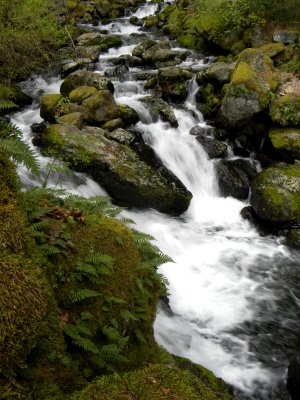 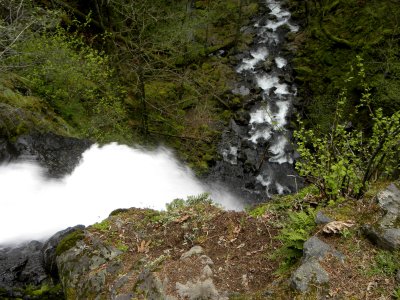 The falls were impressive. I love the crystal clear water of mountain creeks. The rapids and water falls that occur are pure white, a beautiful clean color against the vivid greens of the forest. I could sit and watch waterfalls all day long. I like photographing these scenes as well, however, I’ve not had much success at creating the “silky” water flowing effect with my new camera. The reason why, is that my camera’s maximum focal length is F8, and to really blur water, I need extremely dark days to be able to use a shutter speed of 1 second or longer. Ah well, you can’t have everything. I was happy enough just to be out in the woods breathing the highly oxygenated air of healthy woods, mingling with the spray of clean waterfalls. You can’t breathe air much cleaner than that.

Onward! To the coast, and points north.