Bear Lake and a Return To Bruneau Dunes State Park

We found ourselves on the southeast side of Bear Lake at First Point Rustic Campground. Bear Lake is located way up on the northern border of Utah and the south east corner of Idaho. The lake is shared by both states. Bear Lake is a large lake. It’s twenty miles long, eight miles wide, and its deepest depth is just over 200 feet. The lake reminds me of a miniature Lake Superior. The water is crystal clear, cold, and clean. The shore line is a mixture of sand, small pebbles and eroded chunks of sandstone. Sage Brush and Juniper grow in abundance around the lake, giving off a nice scent. I saw a variety of animals foraging around the lake including, White Tailed Deer, Common Mergansers, Loons, Magpies, Sea Gulls, and Robins. There are five types of fish found in this lake that are found nowhere else on earth. They are: Bonneville Cisco, Bonneville Whitefish, Bear Lake Cut throat trout, Bear Lake Whitefish and Bear Lake Sculpin. At first, viewing Bear Lake from the van, I wasn’t that impressed. Granted, at the time I was tired and cranky. However, as I spent more time near the water, I decided that I really liked this lake.

Driving from Montana, it took us 8 hours to get to the lake, and find a place to camp. I was tired, and sick of being in the van. I decided to ignore my sleepiness, hoping to improve my mood with fresh air and exploring. I wanted to get some exercise for the day and explore the lake. I ate a quick snack, before unstrapping my bike from the rack. I pedaled north into the wind. It was a pleasant ride, passing lakeside neighborhoods, farmers fields and horse ranches. I saw 6 corpses of deer lying in the ditch. Undoubtedly, these deer were hit by passing motorists, which probably didn’t see the deer in time as they dashed onto the road from the roadside juniper groves. I biked for a couple of miles before stopping for a water break. I decided to turn back, as I had spied a likeable boulder that could offer a late afternoon climbing session; a good way to finish off my workout. 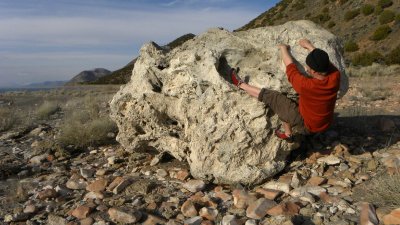 I was right about the boulder, it was climbable, but not difficult. The boulder provided an easy way to exercise my climbing muscles without having to think too much. I had fun with it. That’s what I like about bouldering, it’s a fun, effective exercise that doesn’t need much equipment. Just a big rock and some climbing shoes. I also like the fact that you can find climbable boulders almost anywhere. 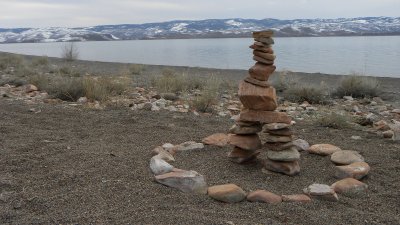 After climbing, I decided to build an Inukshuk, a statue made of rocks. I was inspired by the many statues that I had seen on the beaches of Vancouver. Stacking the sandstone pieces was a lot harder than I anticipated, and my statues fell down 3 times. I gave up on the Inukshuk idea, and instead made a rock tower, which vaguely looks like the Eiffel. The tower was easier to balance, and I was able to complete it on the first try. Satisfied with my efforts, I returned to camp to settle in for the evening. 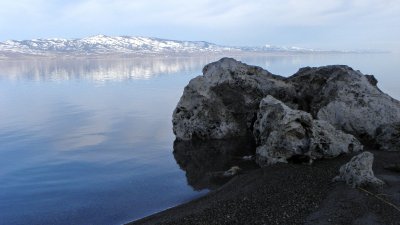 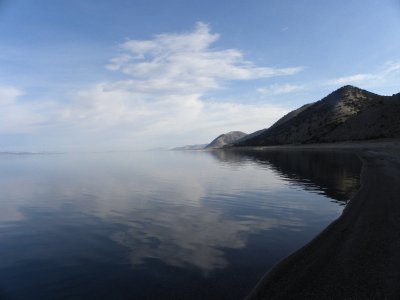 I spent the next morning in leisurely pursuit of happiness. I ate a good breakfast, completed a full body stretching session, read for awhile, and finally went for a walk along the beach. The lake was completely still, and glassy. I could hear the call of the groups of foraging ducks from long distances away. I was sitting on some boulders right next to the water, waiting for the sun to rise over the nearby hills to the east; high enough to warm me up. The mountains across the lake to the west were lit up by the morning sun, and reflected nicely off of the water. Pale wisps of cirrus clouds floated overhead, completing my ceiling. It was very nice to just sit and watch the water, letting its soft movements lull me into complete relaxation. I enjoyed my reverie, and went back to the van to pack up, and drive west.

Driving west through Logan Canyon from Bear Lake, we passed many campgrounds and trailheads as we drove through Wasatch-Cache National Forest. We stopped randomly at a trailhead, and it turned out to be the starting point for a hike up to the Wind Caves. A sign informed us that it was a 1.6 mile hike that rose over 900 feet in elevation. A steady incline for sure, but we wanted the exercise along with checking out the caves. It was relatively hot out. It was 60 degrees, a heat wave compared to what we were used to. It wasn’t long before we were sweating, while we hiked up the relentless switch backs to the caves. 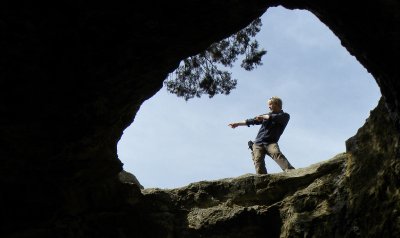 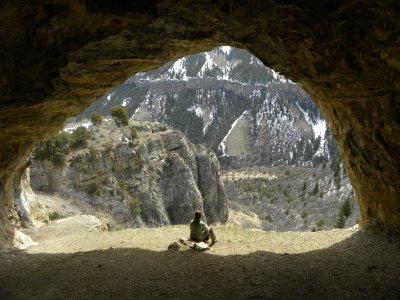 Upon reaching the caves, we took a lunch break, giving us the chance to catch our breath, reload on fuel (eat), and take in the aerial views of Logan Valley from high up on top of the caves. It was pleasant. After lunch, we dropped underneath our perch to the caves themselves. The caves were a spacious carving of limestone, formed by seeping water through cracks in the rock and eroded out by the wind. Three delicate arches are formed on the ceiling and two large caves made up the main cave system. The caves had great acoustics, and I wished I had brought my banjo. Even so, I had fun singing various lines from the songs that roll through my head like a jukebox on a daily basis. We hung out awhile, then deciding we had enough, hiked back down the switch back trail down to the van. It was a great hike, and we were happy to have made the trek.

I ended up back at Bruneau Dunes State Park in south western Idaho. It was right on our way (any place we want can be “right on our way”), and since I enjoyed the park so much the last time I visited (see Taking It Slow In Idaho), it was an easy decision to come back. 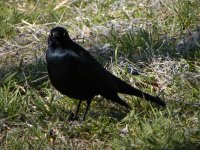 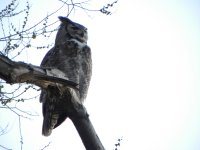 On the first day, I had the best day of bird watching I’ve ever had. I spent the morning and the evening watching the variety of birds chase each other, look for food, and sit in the trees singing their songs. I simply used the van as a blind, and viewed them with my binoculars. I saw: Robins, House Sparrows, Brewer’s Blackbirds, Ravens, California Quail, Red Winged Black Birds, American Coots, Audubon’s Yellow Rumped Warbler, Two Great Horned Owls, and several other species that I couldn’t identify. 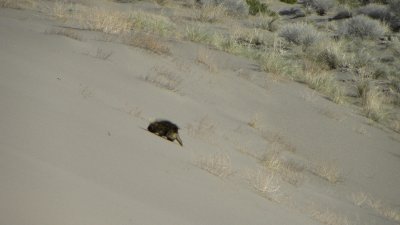 Bruneau Dunes is a magnet for wildlife, walking around Big Dune Lake is an easy way to see what has passed by. There are animal tracks everywhere. I saw a jack rabbit, and what I believe to be a porcupine. While walking the top of the dune at sunset, I heard the yowling and howling of a distant pack of coyotes and the chorus of frogs celebrating in the spring evening. This park is a wildlife lovers dream. 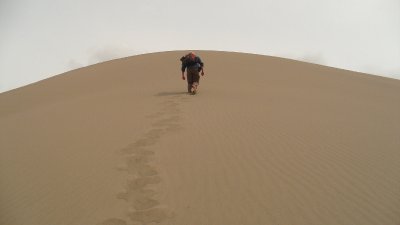 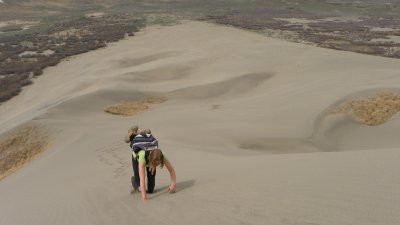 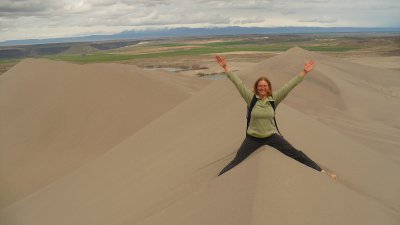 My favorite part of the park is walking the ridgeline of the dunes, which rise 470 feet above the desert below. Getting up to the ridge is some of the hardest hiking I‘ve ever done. Every step is in deep sand, and I sank back down almost to my last step. The angle of the incline of the dunes is very steep, adding to the hardship. It took a sustained effort to trudge my way up, gasping for breath, pausing every ten steps for air. When I finally gained the ridge, the hard walking continued. The ridge line is a sharply defined sand edge, and I almost had to tight rope walk along the top in order not to fall to one side. Walking along the side isn’t any easier, as my ankles were always at an awkward angle trying to gain purchase. My toes even get a work out, digging into the sand for traction. This isn’t a place for slackers, the ridge line makes you earn it. 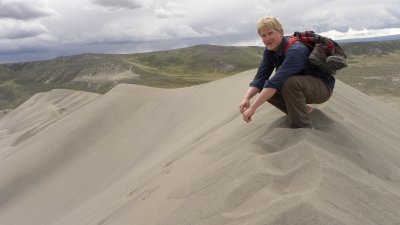 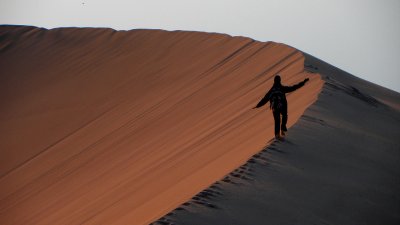 For all the hard work that is required to gain the ridge, the rewards for all that effort are great. I was lucky enough to catch two storm fronts coming through on consecutive days, putting the already picturesque dunes in some amazingly dramatic light. On my previous visit, I had walked the ridge in the morning. I wanted to see how the dunes looked at different times of the day, so I decided to climb up to the ridge during the afternoon and at sunset. Since “a picture paints a thousand words,” I’m going to show you what I saw up on top of the ridge on the two hikes I made to the top. 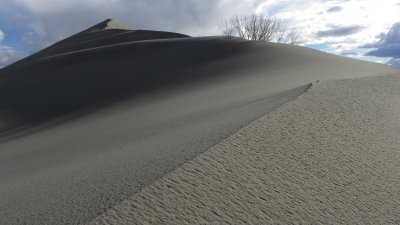 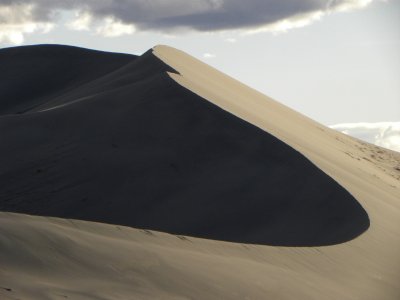 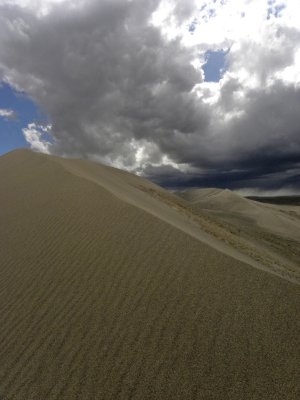 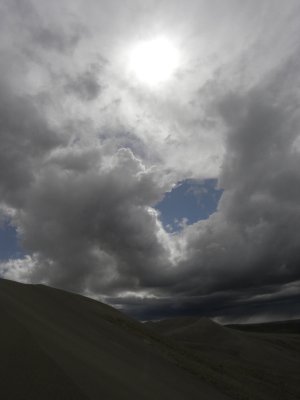 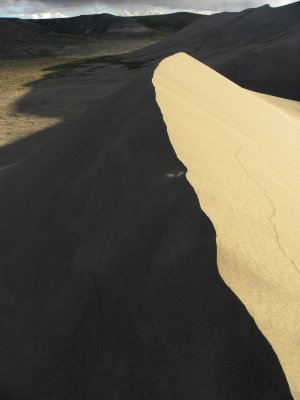 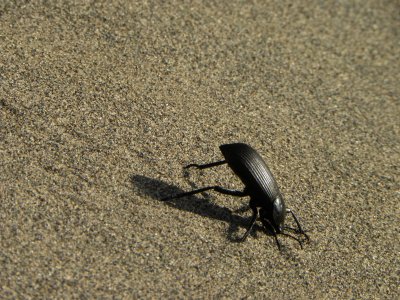 Here is the Desert Skunk Beetle. This Beetle is the largest that I've ever seen.
It has assumed its defensive stance, ready to spray me, if I got any closer. 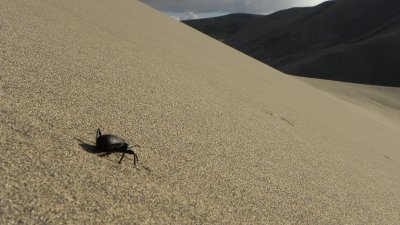 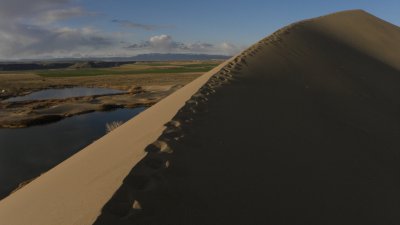 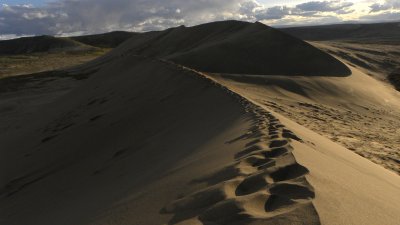 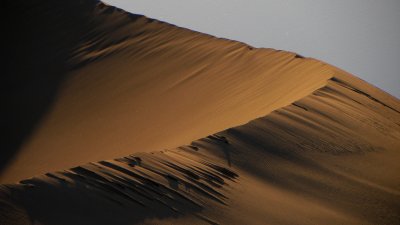 These last three were some of my favorite sunset shots.
After climbing the dunes at different times of the day, I think I like the sunset hike the best. I love the strong lighting in the clear desert air playing off of the sloping sands. I like how it gradually softens as the setting sun sinks closer to the horizon. I like how the shadows continually change, shifting and becoming longer at sunset. I really like hiking back to the trailhead during the gloaming of the day, as night begins set in.

So I had another great visit to one of my newest favorite parks. I could come here for a week every year for the rest of my life, and love every minute of it. If I had to choose, I would pick April as the time to visit, as spring is starting to bloom. I really like the dunes, they are continually changing and if you visited them ten times, I bet that during nine of those visits, the dunes would be different. I love watching the wildlife around the park, the birds make it easy to become a bird watcher. The campground is very nice set in a park like setting of trees. It has WI-FI. It also clean bathrooms and showers. In short, Bruneau Dunes has it all. 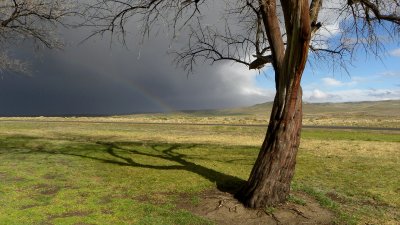 Where to next? Oregon, beginning in the eastern desert and heading northwest towards the Columbia River Gorge.