A week of visiting old haunts around Minnesota and Michigan

The forest is gray with occasional spots of deep forest green. A carpet of flattened, bleached grass, compressed from the winter’s white weight. Small rills of cold crystalline water trickle through the swales that striate the land. The forest floor is an ugly tangle of fallen trees, broken limbs, sticks, leaves and barren bushes. The low bushes and trees foliage will hide most of the carnage come summer time, but for now it is easy to see. The root beer colored rivers are heavy and swollen, though nowhere near their highest stages. It‘s been a relatively dry and warm winter, so snow depth and water levels are down. The water falls of the rivers are still impressive. A barrage of white noise, super oxygenated moist air from falling water surrounding one with a fine earthy smelling mist. The falls are at optimum portrait stage, but the woods that encompass the waterfall are still leaden gray, and not compelling for a picture. Had the river peaked in the full lushness of late spring or summer or even during the magic transformation of autumn, the picture of the waterfall would be fantastic. In April however, it is far from compelling.

I’m back in Minnesota, specifically the north shore region, the playground that I know best. It’s good to be back, it’s been too long since I’ve spent time here, not since last fall. I don’t have a lot of time to stay, I’m leaving tomorrow for Alaska. I was fortunate to be able to spend about a week here though, and I’ve tried to visit some of my favorite spots before I leave.

Some highlights of the past week:

On my way to Wisconsin, I was driving through the heavily forested woodlands of the Upper Peninsula of Michigan. I decided to take a break and visit Bond Falls near Paulding. It had been many years since I’d been to these falls, and I had only a vague memory of what they looked like. I found a place to park next to a couple of back water ponds surrounded by ledge rock, cleared of brush and containing mating mallards. They weren’t mating at the time thankfully, as that would have been a bit awkward, but they were moving as a pair and had made their home in the quiet pond.

I could here the dull roar of the distant falls, and the closer sounds of rushing rapids. It was cold out, maybe 35 degrees. The high clouds diffused the white sun, lending to good lighting. The ground was a covered by a carpet of pine needles with ledge rock boulders sticking out in between the white pines; A good park setting, pleasant and pretty. 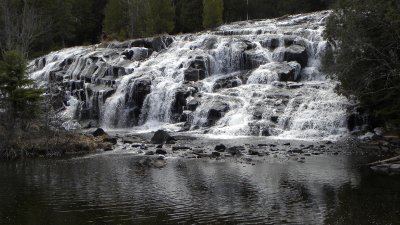 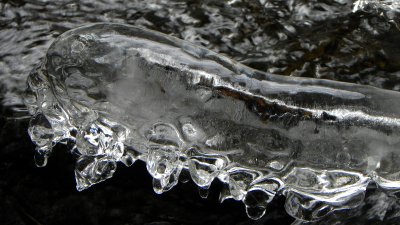 The Ontonagon river falls over a couple of sets of falls, progressively descending over larger “steps” of rock. Looking closer, focusing on smaller aspects of the greater falls landscape, I found beautiful ice sculptures hidden in the small dark recesses of the river bank near the small cascades of water. I love the swirled and multiplied reflected light that courses through the ice. A hodge podge of white, platinum, silver and gray, mixed in psychedelic patterns; like oil on water.

It was 60 degrees when I finally got back to Duluth. It was late afternoon, and my plan was to take care of a few errands and stay the night at Jay Cooke State Park, located just south of Duluth and near the small town of Carlton, MN. Jay Cooke has long since been one of my favorite parks. It offers good camping, good trails for hiking, biking, and long boarding, a scenic river, and access to the Willard Munger State Trail. 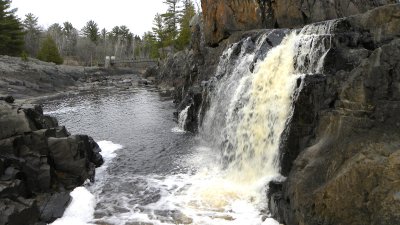 The only thing really interesting about this picture is the fact that where I’m standing to take it, is usually being pounded by a powerful waterfall. In normal years, I couldn’t even get close to this spot. The damn dam operators evidently aren’t letting a lot of discharge out into the river proper right now.

My brother and I had decided to go for a jaunt up into the Superior National Forest, near Isabella. I wanted to be outside, and decided on a hike, followed by a cookout would be just the thing. I drove up to Divide Lake just east of Isabella. I enjoyed eating lunch on the shore of the lake, looking at the melting ice blanket that still covered much of the lake. We decided to go for a walk on the hiking trail that circled around the lake. Walking through the thick forest of spruce, birch, and white pines was enjoyable. I was glad of the trail, as going cross country through this harsh land would have been tough going. My brother and I talked and fell silent, each falling into the groove of the hike and the natural scene around us.

When we reached the apex of our hike, at a small picnic area/campsite on the south end of the lake, we sat down, drank some water, and kept still. The world was completely silent. Not a breath of wind to sway the trees, not even a sound from man, which can usually be heard even in the farthest patch of wilderness with the sound from airplanes and highways.

It was very cool. It lasted for at least 10 minutes when a raven flew right overhead. The “thwish” of its wings pumping through the air was the only noise to disrupt the silence, and that noise was proper. There is something magical about hearing an unusual and natural noise in a silent wood.

The sky grew dark as an afternoon storm was approaching. We headed back to camp to avoid getting soaked. When we got back to camp, I decided that I wanted to clean up, so I grabbed some clean clothes, my quick dry towel, and headed down to the lake. Next to the shore was a patch of open water, roughly 8 feet wide, 4 feet long and about 1 foot deep, just enough room to get clean. I stripped down to my undies, and stepped into the icy water. It really wasn’t that bad, Lake Superior is way more painful. I soaked myself up to my knees, watching the sheet of ice stretch out ahead of me. I thought about completely submerging myself, but I was losing interest in the project with each passing second. So I quickly gave myself a refreshing sponge bath, and dunked my head twice into the numbing water. I dried and changed into some comfortable clothes. I was completely refreshed, relaxed and ready to eat. I grilled up some Juicy Lucy‘s, Cheese burgers with molten cheese oozing from within, formed by cooking it in between two slim patties. This style of burger originated in Minneapolis (Matt’s Bar). I fried up some onions, added more cheese, topped it with Dijon mustard and Barbeque sauce. The burgers were fantastic. Eating outside, after a day of exercise always makes dinner taste better.

That’s how you enjoy the north woods, Minnesota style. 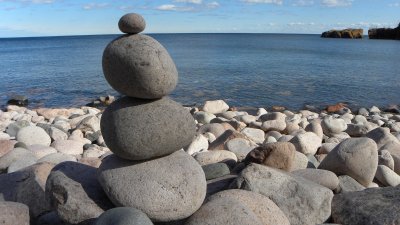 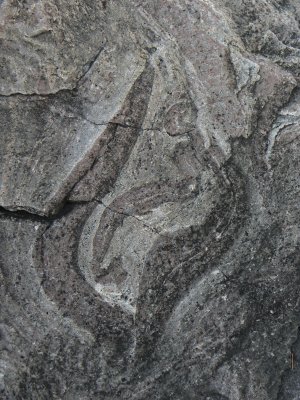 I wasn’t going to be around Lake Superior again until October, and I wanted to spend some quality time along the shore before I left for Alaska. One of my favorite bouldering spots is at Black Beach near Silver Bay. I grabbed my climbing shoes and some water and hiked the 300 yards to my climbing wall. Along the way, I passed over Boulder beach and I was inspired to make a rock cairn as a farewell gesture to the lake. I like these boulders, big as cannon balls with a variety of shapes and sizes. Perfect for a challenging balancing act. 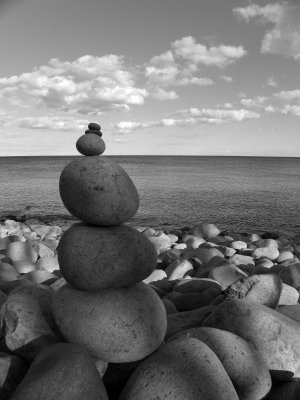 I continued on to my climbing wall. I was pleased to see that there was only one aluminum can to pick up. For some reason, morons who visit beautiful places like throwing their litter everywhere, and here at Black Beach is no exception. I don’t have many issues that I get fired up about, but I hate seeing litter, especially in my favorite spots. I usually will pick it up along the trails or areas I pass, cursing the swine who left it. Is it really that hard to carry your trash back to a garbage can?

Anyway, I had a great climbing session, my first of 2010. I had fun straining myself trying to solve problems that later on in the year would be almost effortless, due to continued climbing through the year. I enjoy seeing the progress in my climbing ability through the year. At first I’m a wimp, but later on, after many sessions on the wall, I can see my strength and ability increase; A good feeling. 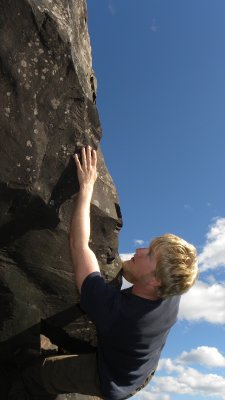 Satisfied with my efforts, all that was left to do before I left was to do a full body stretch on top of the rock cliff that towers 30 to 40 feet over the lake. Stretching always feels great, and it’s even better when you can do in a beautiful location with fresh Lake Superior air flowing around you. A fitting farewell to the lake. 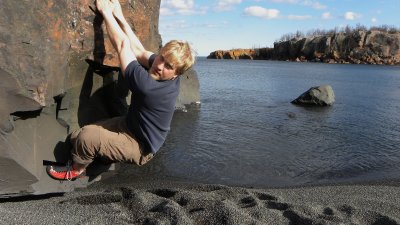 So with that, I have nothing left to do, but turn my van west, and start my second trip to Alaska. I’m excited, I love starting on a fresh journey. I’m excited to get back to Sitka, get back on the ocean, hike up in the alpine, and take in all that gorgeous Alaskan scenery. Before all that, however, I have a three week jaunt through the western U.S. and Canada just to get there. Can you see me smiling?