A Collection of Firsts

I’ve spent the last couple of days between Idaho and Montana, with a day trip into Wyoming. Three states I really like a lot, and enjoy spending time in. I’ve had a number of good experiences during the last few days that bear mentioning. I skied at Grand Targhee Resort in Wyoming, I’ve started couch surfing, I drove into Montana on roads I’ve never driven before, and I took some decent photographs of Trumpeter Swans.

I drove east from Rexburg, Idaho into the Teton valley enjoying a brilliant winter morning scene. The warm light lit up the snow covered valley and the Grand Teton mountains of Wyoming were glimmering under the morning sun. It had been a couple of days since I had seen the sun, and I was enjoying the physical and psychological warmth the sun bestows on our planet. I was excited! I was going to go skiing at Grand Targhee, a resort highly recommended to me by everyone I know who has ever skied there. It was also not going to cost me a dime (other than gas used driving there); a present from my couch surfing host. He had a free pass and was nice enough to give it to me. I drove up the winding road from Driggs, Idaho east into Wyoming. The Tetons were clearly visible and dominated the horizon. I kept glancing from the road, to the mountains and back to the road again, like I was a bird watching a table tennis match. I parked and got my gear together and headed off to the chairlift. 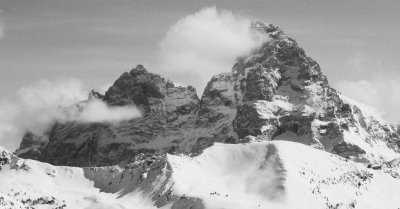 I spent the morning gazing at the magnificent mountain views. The mountains were out in all their winter splendor. The tops of the rocky faces and steep cliffs were covered in bright snow. The blue shadows where the lofty peaks blocked the sun contrasted with the white snow. The sky was a deep azure blue, making the snow capped peaks stand out that much more. White clouds that were blowing off of the high peaks seemingly trying to get over the tips of the rock without touching, but failing. Intermittent pines dotted the lower mountain sides, some forming groves of deep green trees.

The skiing wasn’t all that great however, the mountain hadn’t seen any new snow for about a week before my visit, and the surface was very hard and icy. It didn’t help that I hadn’t sharpened the edges on my skis since the beginning of the year, and so it was like attempting ice skating with dull skates, not very easy. I can say though, that if Targhee had a good powder day, it would be phenomenal. That’s kind of the thing with skiing. If the snow conditions are good, you are always going to think well of the mountain. If they are bad, then you might hesitate to return, and your feelings concerning the hill will be negative. While I didn’t see Targhee at its best, I didn’t really mind because the mountain views made it all worth it.

I did something really stupid while on the mountain. I had stopped at a scenic overlook of the mountains and was trying to take a picture of myself. A nice young woman asked me if she could help by taking the picture for me. I thanked her and handed her my camera. I decided that I wanted to have a really nice shot, and I slipped under the boundary rope protecting skiers from the edge of the cliff. Well, I didn’t think much about it, and was standing there smiling like an idiot, when I fell into the snow up to my armpits. I had fallen through the cornice. A cornice is a ledge of wind driven snow that builds up over the edge of a cliff or mountain. It is unsupported from underneath, and hangs onto the mountain by friction of the drifting snow. Not a great place to walk, especially under the freeze and thaw conditions of spring. So there I was up to my chest in snow, and I knew that this was not a great place to be. I calmly crawled my way out of the hole and rolled back under the rope. A close call, that could’ve been a lot worse. I learned my lesson: Don’t go beyond the ropes!! I was stupid. There was a sign right in front of me that warned me of death if I crossed the rope, and I blew it off without even thinking about it. Anyway, it wasn’t a big deal, I didn’t even get an adrenaline rush out of it. The lady took my picture and had a story to tell her friends. I wonder what she would’ve thought had I completely fallen through, “Hmm, I guess he won’t be needing this camera anymore...” 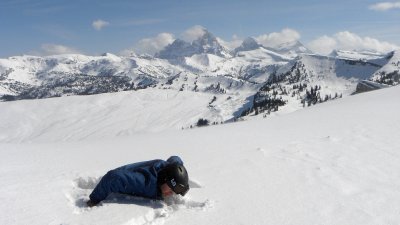 Couch surfing has turned out to be an awesome community to join. I had recently found out about this program in January, and was interested to see how it could affect my travels. Basically, CS is a community of people who offer their couch and home for travelers to stay at while they are in the area. It’s carried on through online participation. You create a profile, declaring if you have a couch to offer. People can contact you via the CS website and request your couch. To me, it makes complete sense for the following reasons: It’s economical, it allows you to meet local people of the area who can offer insight that a guide book would never know, it’s a good way to learn about the areas customs and culture, and you will remember the people and families who took you in and showed you their hospitality.

My first experience was very positive, I met a terrific young couple who were very nice, generous, interesting, and funny. They had hosted and surfed many times, and had no problems with me staying in their home. It was great. I saved money, I met two very interesting and knowledgeable travelers who gave me ideas on my own future travels. I was glad to see the CS system worked, and how positive it could be. Now that I’ve surfed a couple of times, I realize that a combination of surfing and independent travel is probably the best way to go. Meet people who can help you figure out the country you are in, get a taste of local customs, and then head out and explore on your own. That’s the way I’m going to travel from now on. Check out www.couchsurfing.org if you are interested in joining this fun community. 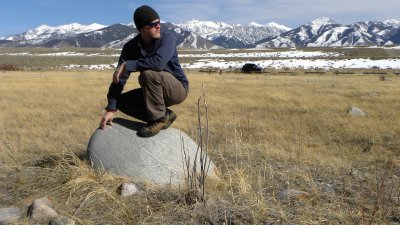 I drove back into Montana over the pass near Henry's Lake. It was a beautiful day for driving, and I had no engagements until the evening when I planned on meeting some friends for dinner, and finding my next CS host. So I took it easy, the scenery was fabulous and beautiful in typical Montana fashion. I was driving north through the Madison river valley along highways 87 and 287. The grass was sun dried and golden with occasional patches of snow. The Madison river is a dark colored river and it reflected the pale blue sky as a very dark blue. Sporadic Cottonwood groves grew along side of it, and near the creeks that emptied into it. Distant mountains were visible in every direction. The valley was sandwiched between the Gravelly range and the Rocky mountains. The mountains were very rugged and snow capped, brilliant white in the bright sunshine. 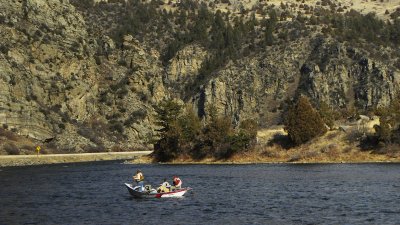 I passed through an impressive rocky canyon just west of Bozeman. There were several pullouts and campgrounds along side of the road that allows access to the river. There were a lot of fisherman taking advantage of this, I saw some in boats, and lot of shore casters enjoying the Sunday sunshine. I decided to take a siesta myself, and parked right along the edge of the water. I had a peaceful time, reading, river watching, and relaxing. A perfect Sunday afternoon pastime! 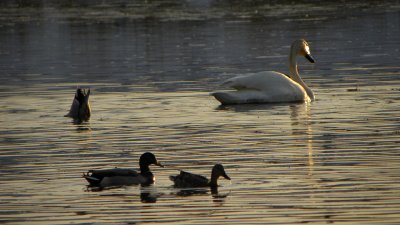 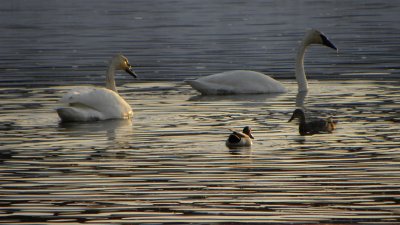 After I got to Bozeman, I met one of my friends before dinner, and we decided to go for a walk in a park near the rendezvous place for our dinner party. At the park, there was a muddy path that made its way around a small pond. The sun was setting, and warm light was dramatically lighting up the pond. In the pond, foraging around for their dinner, were two Trumpeter Swans and several Mallard ducks. What luck! They were pretty much oblivious to us walking along the path, so I had many opportunities to photograph them. I liked how the ducks would dunk themselves, reaching deep with their beaks while their arses stuck up out of the water. Hilarious. I enjoyed myself, taking many photos. I realized that so far this trip that I’ve had tremendous luck with my photography. I happened to show up at a nice pond while a strong sunset was taking place. Then, there happened to be something interesting to photograph to complete the scene. As a photographer, sometimes all you can do is just head outside and have your camera ready. Sometimes you’ll strike artistic gold, and other times you won’t take a single photo. I find you can increase your odds a little, by going out in good lighting, by going to someplace scenic, and spend a lot of time there. Put yourself in a good situation, and eventually your time will pay off. Not only that, but even if you didn’t find a worthy scene, you still had the chance to enjoy the great outdoors, and get a little exercise. 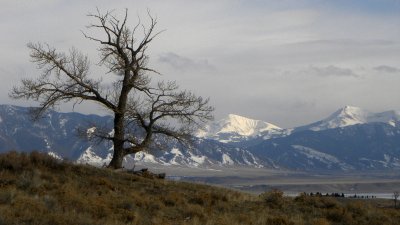 So long, from Bozeman!