I woke up with a craving for donuts. Since I was in Canada, I was in luck, because Canadian donuts are the best. Tim Horton’s is the Canadian donut and coffee franchise that can be found in every province. They make great donuts and good coffee, and that was what we were after. We stopped there and purchased a dozen donuts and some coffee. Before we had driven 3 blocks, the four of us had eaten 11 donuts. They were awesome, and we pigged out, I’m kind of ashamed to say. It was funny at the time, and we greatly enjoyed them.

We were on our way up to Squamish, a town northwest of Vancouver along the coast. None of us really wanted to walk, as we were all still tired from all of the walking we had done the day before, so we figured a leisurely drive along a gorgeous coastline would be just the thing to suit our tired bodies. The drive up along Hwy 99 is beautiful. Chains of islands rose up from the sea, some of them reaching high into the sky forming rugged snow capped mountains. Huge bluffs of white granite towered above the road along the coast wearing a scarf of green pines, and necklaces of white waterfalls dropped from the high country. Azure blue skies, with puffy white cumulous clouds formed our ceiling, and it was “beautiful British Columbia” at its finest.

Hitting a massive sugar low on the way, we all got really sleepy. No wonder, with all the abuse we put our bodies through already today. We stopped at an informational rest area in Squamish, to stretch, figure out a game plan, and hopefully try to get a little energy going. We talked to the lady giving advice on what to do in the area, and she talked us into hiking up to one of the peaks of Stawamus Chief Provincial Park. We hadn’t planned on hiking, we didn’t really know what we were going to do when we got there, so we were unprepared for the hike. I had taken a shower that morning and was wearing jeans, which I detest hiking in. I had hiking clothes back in my bag in Vancouver, but they weren’t much help to me there.

The trail was very steep rising along side of a creek, a rushing stream of crystal clear water that dropped down from the high country to the sea. It was very tiring, and it wasn’t long before I was sweating. So much for the shower I took before we left. I didn’t care, I was getting into the hike, taking long strides, and climbing over logs, boulders and stumps. I walked along the trunk of downed trees, balancing my way across, and climbing up boulders for the challenge of it. I was pretty much in my element. The trail finally leveled off on top of the bluff, and we decided to hike to the top of “first peak” one of three peaks that make up the Stawamus Chief Provincial Park.

We took a break at an overlook of the valley to the east of the ridge that we were climbing. The far rock wall rose up from the floor of the valley and you could hear the water of the distant creek rushing far below. White peaks of distant mountains peeked at us from behind the green pines of the far valley wall. We rested, drank our water, and had a snack before continuing on. The trail split, and we took the first left heading up first peak. Near the apex of the hike, the top of the bluff forms an immense dome of white granite. The rock is very grippy, and it’s easy to run up it mountain climber style. The rewards of our hard work were the magnificent views of distant snow covered mountains, 2nd and 3rd peaks, the town of Squamish far below, and the beautiful valleys that wind in between the mountain ranges. It was worth it. 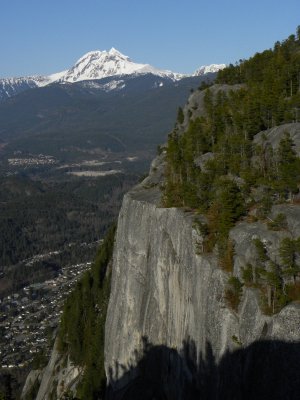 It was very glad to see where the people of Vancouver play. It was nice to step into the woods again, and be back in my element. I like exploring cities and neighborhoods, but I like exploring a region’s natural areas more. The Squamish area was a nice change of pace for me. The people of Vancouver have an awesome playground: mountains, oceans, lakes, forests, and rivers provide the pallet for any outdoor activity you choose to pursue. The seasons in the region also offer a variety of activity. Here in February, it was possible to take a kayak out in the morning and be on the slopes skiing in the afternoon. Vancouver is indeed a gem in the Canadian crown of great places.

On our last day in Vancouver, the amazing weather that we had been enjoying came to an end. It was overcast and gloomy and light rain showers fell intermittently through the day. Knowing it was our last day, we tried to make the best of it, but along with the gloomy weather, we were very fatigued after spending four days hiking around the city and up the mountain near Squamish. You might say our get up and go, had gone up and went. We were also kind of running out of ideas on what we wanted to do. We had seen so much, and had done so much already, that it was anti-climatic. However, we gave it a good shot.
The first place we visited was Wreck Beach, down by the campus of the University of British Columbia. It turns out it is a nude beach, the first I have ever visited. Nobody was out and about, so to speak, and we enjoyed a leisurely stroll along the shore. I watched song birds foraging in the thick brush and brambles on the steep slope that runs down to the beach. I also used my binoculars to watch a flock of Barrow’s Golden eyes swim around just offshore. The worst part of the beach was the long set of wooden stairs that lead down to the shore. We had to walk up them to get back to the car, and we were all feeling the pain climbing back up.

We went to the Vancouver Maritime Museum. A kindly old gent I met a few days prior gave me two free tickets, and it made sense to use the tickets before we left. The museum was mildly interesting. I enjoyed touring the RCMP Patrol boat and seeing the quarters that the sailors lived in. I liked the pirate exhibit, and playing around in the kids section. If you are really into anything to do with ships, it’s worth a visit. I found the atmosphere kind of heavy, I was tired, and it had the effect of attending a history class in high school right after lunch. It was hard to stay awake. I don’t fault the museum for this, it was simply the circumstances in which I visited. I was tired, the museum was very warm, it smelled of old documents and though I love history, sometimes it can be hard to keep interested. They had perfect conditions to put me to sleep. The museum personnel must have thought I had problems, as every time they looked at me, my face was twisted in a yawn. I thought about crawling in one of the bunks on the ship; I could’ve slept for hours under the disguise of an automated sailor snoring away the journey.

After the museum we decided to walk back to Granville island. There were still some international houses that had some hope of being something other than a pub. Besides that, I heard good reviews of Tony’s Oyster Café’s clam chowder. We made the long slow walk in the rain to the island. Due to the rain, the crowds weren’t nearly as busy as the first day we had visited. We learned that the Swiss House was a restaurant/pub, and since we didn’t have any other ideas, we stood under an awning and watched a street musician play a lonely set to a miniscule audience. I enjoyed loitering and people watching. I took some photos and enjoyed the subtle, subdued rainy day and the people passing by. 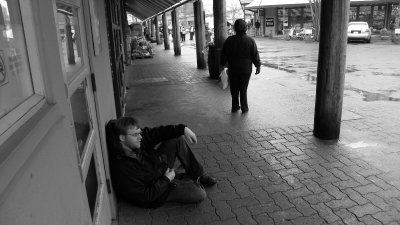 The chilly wet air got the better of us and we got up to work the chill out of our bones by eating lunch. We ate at Tony’s Oyster House, and had a good lunch. Some of the members of the women’s Russian Curling Team were there. I ate a respectable bowl of clam chowder, and it gave me the strength to carry on for the rest of the day. 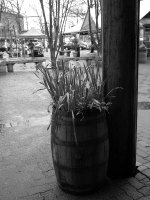 After lunch, we wandered around again and watched a glass blower work his trade through his workshop windows. This was a fascinating experience, and I was mesmerized as he gathered the glass on a steel rod, rolled it, reheated, blew into it to give it some form, rolled it again, reheated it in the super heated oven, blew air into it again and repeated the whole procedure. He gradually formed the ball of molten glass into a perfectly symmetrical solid object and I was impressed.

We watched a crazy alien parade which was cool. Imagine a collection of funky aliens of a wide variety of shapes, sizes, and colors dancing to the beat of good drummers. They patrolled their way along the streets near the French House making several circles and collecting people to join them as they went. Kids would jump out and dance with them, and the aliens would give them hugs. I liked it. Good costumes, solid drum rhythms and I loved the weirdness of it all. It kind of made my day. Check it out.

So it was an awesome vacation from my vacation. I’m extremely happy that I came to Vancouver, this gem of a city by the sea. I’m glad I got a taste of the Olympic spirit, and I loved the Canadian national pride that was symbolized everywhere using flags, colors, signs and the people of this great country. I liked exploring Vancouver; it’s easy to get around using mass transit. I liked seeing its parks, neighborhoods, and meeting the people. It was fun to eat in the many restaurants Vancouver boasts. The coffee is brewed fresh in coffee houses on every block, and it’s delicious. It was good to see where Vancouver goes to play, up in the high country of British Columbia near Squamish and Whistler. I haven’t been to a lot of cities compared to other people I know, but Vancouver is my favorite. I can’t wait to come back. 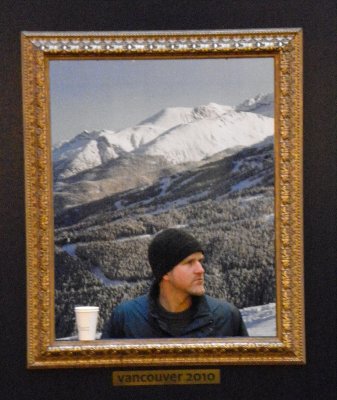