How I Fell In Love With Vancouver

The third day of the trip was the best day of my vacation, and made me want to move to Vancouver. I spent the day in the company of a native Vancouver resident who could show me the city from an insiders viewpoint. I spent 12 hours exploring the city on foot, by ferry, train and bus. Vancouver’s public transportation system is great, and was free of charge for the weekend. Exploring by foot is a terrific way of seeing the city, and it felt like I walked about 22 miles. I was very tired by the end of it, but happy with the day.

For this entry, I want to try a different style of writing. Instead of a time sequence of what I did, I’m going to simply talk about the highlights of the day and areas of the city of Vancouver that I enjoyed. 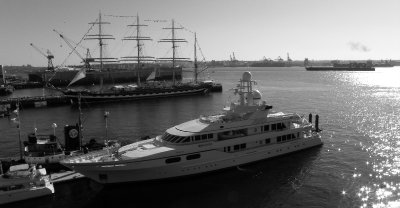 Lonsdale Quay is located in North Vancouver and can be reached easiest by taking the sea taxi from Vancouver. A big part of the quay is the public market full of vendors selling food, drink, and other goods. One of my favorite souvenirs to buy from new cities is uncommon fruit that I don’t have a lot of access to in the Midwest. As Vancouver is a major trading port with the far east, they have a great selection of different food stuffs at the local markets. I took advantage of this by purchasing a papaya, which was my first. I climbed the metal spiral staircase to the top of the “Q”, a high vantage point on the patio of the market. I enjoyed listening to the high school band that was playing Benny Goodman swing tunes. Two young boys stood in front of the band and were directing the band with their hands. It was a Kodak moment if I ever saw one. The views from the top of the Q were fabulous. I had a great view of the city, Vancouver harbor, and the mountains to the north. I spied the four-masted Russian sailing vessel “KRUZENSHTERN” parked at a slip across the way. In front of it was a sleek, sophisticated, brilliant white private yacht that made an interesting contrast to the old vessel. It made me think about how the technology of boats has changed. 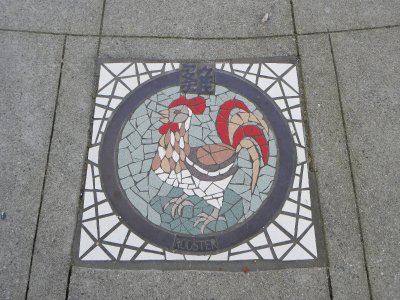 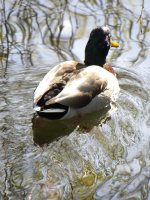 Vancouver’s China Town contains a wonderful set of gardens. I found the Dr. Sun Yat-sen classical gardens a very beautiful and peaceful place to visit. A quiet, serene area; a noticeable change of pace to the hustle and bustle of downtown Vancouver. I stepped into the gardens and things seem to calm down almost immediately. I had walked into a stone square with soft Chinese sitar music being played over the speakers. In the middle of the square were mosaics of the symbols of the Chinese zodiac. Over the symbols were wooden arches with cards of wishes tied to them. I found my sign (the rooster), and went to the middle to write out my wish. At first I couldn’t think of anything to wish for, but then I reflected on how good life is, and it was easy to find a wish after that. I tied it to the arch over the rooster and walked to the next part of the gardens which contained the garden, pond, and perfectly placed landscaping. I watched the ducks forage around in the pond, completely at ease in their personal pool. I loved the landscaping, the weathered rocks, and well placed trees that gave me the same feeling I get when walking through a quiet forest. A small enclave of peaceful nature in a city dominated by the works of man.

Commercial Drive in east Vancouver is my favorite street in the city. I fully recommend anyone coming to Vancouver to walk this wonderful area and take in the sights and smells of this Bohemian neighborhood. Commercial Drive runs north to south between Venables street on the north end and North Grandview Highway on the south end. It is easily accessed by taking the sky train east from downtown Vancouver and getting off at the Commercial Platform. The drive consists of a wide variety of unique shops, markets, galleries, pubs and ethnic restaurants. I don’t believe I’ve seen a street with such a wide variety of international choices to eat at. I tried Ethiopian food for the first time at the Harambe Restaurant. “Harambe” comes from Swahili meaning “working together in unity” which was a fitting way to describe the meal. Between my friends and I, we decided to order a platter consisting of a variety of choices to choose from all piled onto a flatbread called injera. I learned to eat in the “gursha” style, ripping off strips of injera that had been rolled into an Ace bandage-like bundle. With that strip, you grabbed from the small piles of food that had been placed onto the platter, and ate it without the use of utensils. It was a fun way to eat, and was completely in the spirit of Harambe. It was delicious. I wouldn’t hesitate to go back again, and look forward to it. 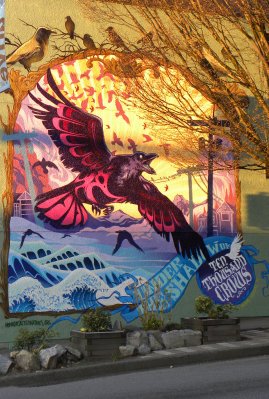 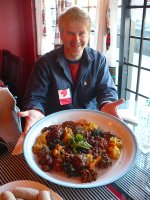 After our late lunch, we slowly walked north up the strip, peeking into crowded pubs through the windows to see who was winning the hockey game between the U.S. and Canada. In Canada, hockey is the national sport and expectations are very high for the national team to bring home the gold. Every time Canada scored, you could hear the crowds cheering in the pubs from out in the street. It was in this way that I kept track of the game. I stopped into some of the shops along the way; I bought a bandanna, a chocolate bar, and perused one of the coolest bookstores I’ve seen, full of wood carvings, good books, and uncaring fat cats lying around underfoot. I listened to a group of friends playing music in one of the cafés. The mood was light, and they played good music and seemed to be enjoying themselves. I liked the murals that had been painted on almost all of the buildings. I like when cities take an interest in public art, even if it’s as simple as a design etched into a sidewalk, or a mural. Commercial Drive has a great atmosphere; it’s laid back and funky. It made me feel like I could let my guard down, and relax. If you go, bring a healthy appetite and an open mind.

My favorite way of seeing the downtown area of Vancouver is on foot, and at night. I love seeing the city lights light up all of the high rises and buildings. The temperature was perfect for wandering around at night, and I made a large circle of the downtown area checking out the Olympic spotlights on the harbor, the laughing men statues near English Bay, a fireworks display (the best I had ever seen), and the Olympic crowds gathered in Robson Square to see a lightshow, and stage performances. 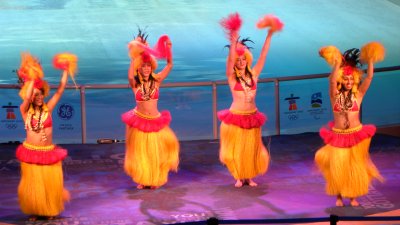 I’m glad I had spent a lot of time skiing over the last couple of months. It allowed me to tromp around town and keep up with my guide who was used to the long walks that make up a day in Vancouver. At Robson Square I saw a performance of Hawaiian Hula dancers that had been brought in to entertain the crowds at the square. After seeing them shimmy and shake their grass skirts to the rhythmic music, I realized two things: that I’m a huge fan of belly dancing and I want to visit Hawaii. It must be fun to have hips. 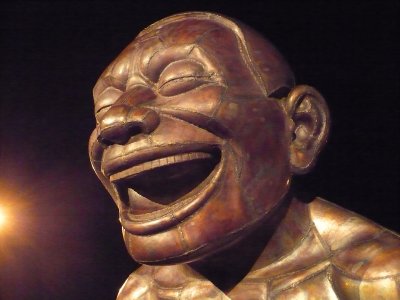 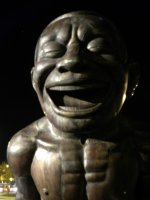 The laughing men statues at English Bay were a definite highlight for me. I like public art, especially when it’s done creatively. The statues consisted of 14 figures made of metal about eight to ten feet high. The were sculpted in a variety of funny positions and all of them are laughing. In fact, I’d go as far as to say that they are laughing their asses off. They make for interesting photos at night, I made a mistake by not bringing my tripod which would make taking crisp pictures of these statues a lot easier. From English Bay, I walked around on the seawall trail, listening to the upbeat string band playing across the harbor at the French house while I watched the 20 Olympic spot lights making patterns in the night sky. The patterns are designed on the Internet by anyone who wants to submit a design. They change every 12 seconds, and some of them are quite spectacular.

I finished my night by watching two light shows. The first was a fireworks show that took place over the Vancouver Pavilion. It was choreographed to music and lasers and was the most impressive fireworks show that I had ever seen. Maybe it was just being in the moment, watching beautiful displays of exploding rockets, reflecting on the awesome day in my new favorite city, but I loved it. Afterwards, I found myself running ten blocks through the downtown streets trying to get back to Robson Square in time for the next show. We had 12 minutes to get there. I’m not sure how my legs held up, but I made it back to the square just in time to see the beginning of the show. Loud music blasted out of speakers, bright fireballs shot up to the music, I could feel the heat from them from over 60 feet away. People dressed as hockey players, skiers, and snow boarders flew by on the zip line to loud cheers from the crowd. Lasers sparkled on the surrounding buildings and in the smoke, and occasional rockets exploded high above. It was good, but I liked the first fireworks show more. The best part was at the end of the show, we sang an impromptu rendition of “Oh, Canada” the national anthem. I didn’t know all of the words, but hummed along with all of the patriotic Canadians. It was a great scene, red Canadian flags waving, the buildings and lights of the city all lit up with colorful lights, and everyone singing as one. It was beautiful.

I rode home exhausted and happy on the city bus. I thanked the tired bus driver for the ride, grateful that I didn’t have to walk home from downtown. As it was, I had to walk 10 blocks from the main road back to the apartment, but it gave me time to reflect on my amazing day. As I settled in for the night, stretching my aching body, and lying down on my mat, I realized that I could easily live in Vancouver and love it. What a city.

I can't wait to visit Vancouver someday. Thanks for sharing your experiences!