We arrived at the border a couple of hours after sunset. The crossing was well lit under halogen lights and there wasn’t any queue to wait in. We drove right up to a booth, and it was here we met the Canadian Terminator. “Why do you want to enter Canada? Who are you going to see?” These and many other questions were demanded of us by a half robot, half man intent on grilling us until we admitted our real reason for visiting Vancouver (eating in their selection of tasty restaurants). I half expected to see him sprinting after us up the highway and jumping on the back of our car. He dismissed us with a simple “Goodbye” and we were allowed to enter Canada. We drove northwest to Vancouver, our playground for the next six days. 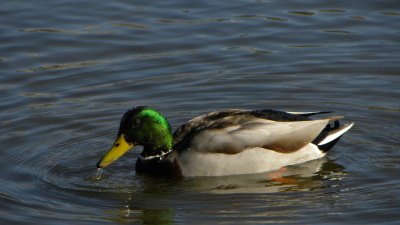 We awoke the next morning to a gorgeous day. The sun was warm and bright, a welcome change from the chilly morning fog of Idaho. The world was all blue skies, green grass, happy flowers poking out of the grass almost ready to bloom. Birds were chirping, I swear I heard Vivaldi’s “Spring” serenading me from afar. It was a fantastic day to be outside. Our crew consisted of six like minded, well rounded world travelers. A good chemistry of friends with different ideas on how to explore Vancouver. We parked at a public beach and spent the day on foot exploring Granville Island, the downtown mayhem of Olympic fever, watching an awards ceremony for the women’s half pipe, and being part of the Olympic street party that seemed to pulse throughout downtown Vancouver. 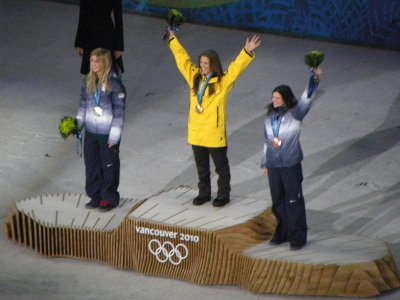 I enjoyed the awards ceremony. Since this trip was completely spur of the moment, we had no idea if we could get tickets to an event, and didn’t have high hopes for seeing one. It turns out our hosts had been given tickets for an awards ceremony happening that night, so we went to the ticket exchange and bought tickets for the same event. They each cost 50 dollars, which seemed reasonable to us, and were probably the cheapest tickets we were likely to get our hands on, on such short notice. We walked to BC Place, were greeted, inspected, searched, wanded, and eventually allowed to enter. We all had separate seats, and went our separate ways. I had a good seat compared to the rest of my friends, just to the right of center and high up in the arena. When the three women who had won medals in the women’s half pipe snowboarding competition were announced , the crowd went crazy, and it was very easy to get into the Olympic spirit. It was very touching to see the flag raising, to hear the Australian national anthem being played and to see how proud Torah Bright was upon receiving her gold medal. Seeing that made me appreciate and fully understand what the Olympic games are all about. 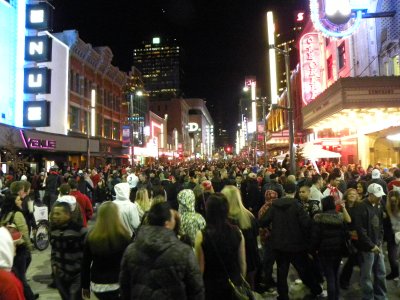 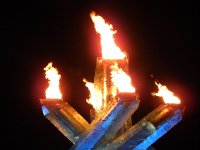 We exited the arena and walked through the downtown mass of humanity. There were people swarming everywhere, and everyone was going somewhere. A thousand passing faces of every shape and description, impossible to remember them. Foreign tongues wafted through the milling crowd, French, Chinese, German, English, and others I couldn’t identify. A million good scents from the kitchens of the restaurants which were all packed to capacity, and doing the best business of their lives. I crowd surfed, keeping track of my friends as the crowd pushed them into the distance, and catching up with them on the next surge. Testosterone filled young men, gathering in the middle of the streets chanting, “CANADA! CANADA! CANADA!” Young women running through the streets screaming, laughing giggling, seemingly delirious with pride. The whole place was loud. I had to yell to make myself heard above the din. Street performers were out in force, mostly guitar players, but also fiddlers, mandolin players, drummers, and even an elegantly dressed young woman playing a flute. Canadian red was the color of choice. I found a small pocket sized Canadian flag on the ground and proudly displayed it on the front of my shirt pocket. I saw the torch all lit up by fire, partly obscured by an unnecessary chain link fence. Everyone had their cameras out and were taking pictures of friends and family in front of the universal flame. I enjoyed it all, I’ve never been in such an electric atmosphere of national pride, and Canadians were damn proud to be from Canada.

We rode home on the bus. It was late. Tired families and friends sat heavily on the seats staring at the floor or out the window. Some clung to the overhead hand straps, almost too tired to stand. Children leaned sleepily on their mothers, and babies in strollers slept away the ride in comfort, unconscious to it all. It was a long day of walking for everyone, and we were tired, with sore feet. We walked many miles through the downtown area, and we were happy to lie down and rest our weary bones after such a long, fulfilling day. 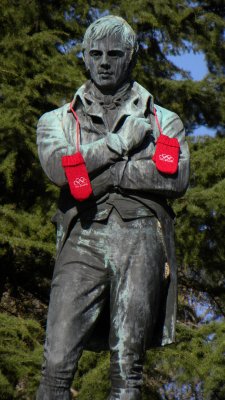 Stanley Park is located on a peninsula of land that lies on the northwest corner of downtown Vancouver. It’s the gateway to the Lions Gate Bridge which crosses over the shipping lanes to North Vancouver. The park is one of Vancouver’s more popular areas, and attracts locals and tourists alike. The seawall trail is a paved bike/walking path that follows the coast around the peninsula, and sees heavy traffic throughout the day. Most of the park is forested with many trails winding their way through the peaceful natural area. There are several beaches located throughout the park, allowing easy access to the ocean. There are several examples of totem poles on display on the east end of the park. It’s a great place to relax and take in another sunny afternoon. 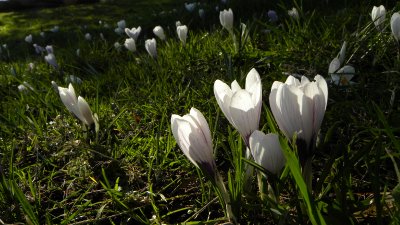 With all the walking we had done the night before, we decided a leisurely day in Stanley Park would be a good remedy. On the way into the park, we noticed that the Saxon House was making it’s home in the Vancouver Rowing Clubhouse located on Stanley Park Drive. The Saxon House is one of the many International Houses and Pavilions that are dotted around Vancouver. These houses can contain cultural examples of their particular country including food, drink, and other displays. Some of the countries put a lot more effort into their exhibits, while others served regional food and beer. More or less, an expensive pub. We found many of the houses already, but all of them had very long lines just to get in. The Saxon House had a short line forming in front of it, and we joined the end of it, happy to finally be seeing one of houses. We chatted amiably with the group behind us, learning where they were from and what they had seen so far. We compared notes as to the good displays and houses, and what events we hoped to see. Throughout our wanderings, we ended up talking to people. I’m not sure if it was general friendliness, the Olympic spirit, or a combination, but everyone was very friendly and welcoming.

Finally, we got in. We hoped we would see musicians, bakers, cobblers, or some other display from the Saxon region of Germany. Instead, we found another line to stand in, this one allowing us to purchase an authentic Sausage from the Saxon region. Twenty small stand up tables were scattered around the room, and TV’s broadcasted the games on the wall. A bar stood at the end of the food table, and that was it. I bought a sausage with sauerkraut, covered in mustard, and “happily” paid ten dollars for it. I didn’t want to eat it indoors, so I left the house and ate it on a park bench overlooking a marina. The sausage was good, and made a nice snack, though at about a dollar a bite, I wasn’t about to go back for seconds. 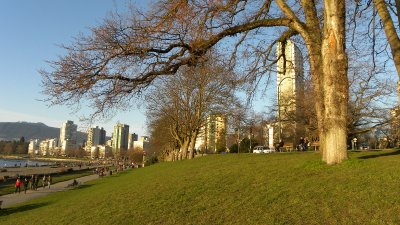 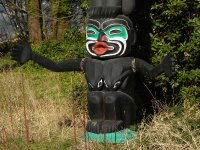 The rest of the afternoon was spent checking out the totem poles, lounging on the beaches in the warm afternoon sunshine, walking along the seawall trail and checking out the impromptu artists gallery set up on the retaining wall and in the grass. I talked with an artist who was in from Australia, selling his wares on little pallets on the grass. He was very talented, and I was impressed. For dinner I had a bowl of chowder and tried raw oysters for the first time. They weren’t bad, pretty much like any other kind of seafood I’d eaten, and I wouldn’t shy away from eating some more of them. 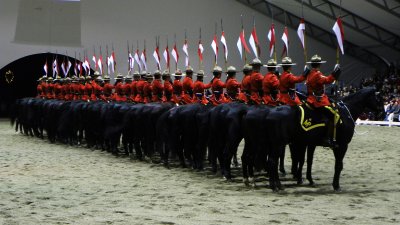 After dinner, we drove south to the evenings entertainment. The Royal Canadian Mounted Police were putting on a musical ride down in Surrey, which was about 40 minutes away from the apartment we were staying at. When we got to the entrance of the arena, we were told that it was sold out. However, if we came back tomorrow we might get in. Disappointed, we hung out, making sad eyes at the gate keeper, when another lady on a loudspeaker announced that there were rush seats available, but only if we ran. We ran, dodging down the ramp and into the arena. We got the last seats in the house, and considered ourselves very lucky. 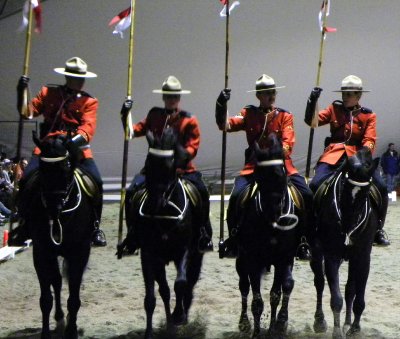 The show was amazing. The RCMP trotted their mounts around the sandy floored arena in formation making patterns as they weaved in and out of one another. It was very cool to see well trained horses under the direction of very talented riders. They didn’t make a single mistake that I noticed, and the show was a success. At the end of it, the horses were positioned at the perimeter of the arena so the kids could pet the horses and meet the riders. Pictures were taken, and everyone left happier than when they arrived. I’m beginning to think that’s Canada’s goal. 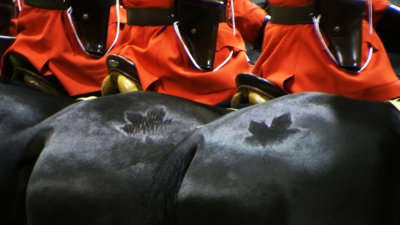 It had been another good day, and we ended ours slap happy, and giggling at a late night restaurant. We ate our snack, enjoying the food, and the camaraderie. For some reason, one of my friends becomes hilarious whenever we go out to eat. Waitresses love him, and we laughed at the banter that took place between them. We finished off the night driving 45 minute drive back to Vancouver, and once again were happy to see our beds.