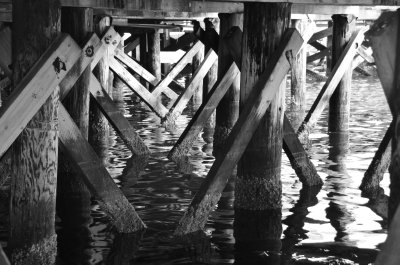 The tidal change can be severe in the Pacific Northwest. It is not uncommon for the tides vary by fifteen feet or more. Coastal communities have to build tall, beefy docks to counter the tides, which mariners call a hard dock. A hard dock has its structure embedded into the sea floor. The docks have to endure decades of abuse brought on by exposure to salt water, surging tides, docking vessels and wind. Heavy beams soaked in strong water resistant chemicals make up its support structure. The docks are tall, the better to cope with the differences in tide and swell. On the face of dock, they have skinny escape ladders set at intervals. These ladders serve two purposes. They allow a member of a docking vessel to climb on the dock to secure lines. They allow for someone who has fallen in the water a place to escape.

We moored our ship to an old wooden hard dock in the small island community of Alert Bay, British Columbia. On a whim, I put on a life jacket and walked along our rub rail on the dockside of the ship. It was cold, dark, and mysterious. There were large white cauliflower anemones attached just below the low tide water line. Barnacles stuck to everything. Bull Kelp draped from the crossbeams and ladders. The place had a life all of its own. 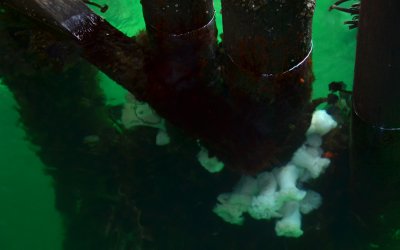 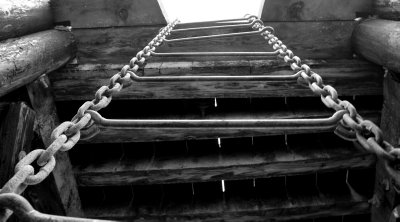 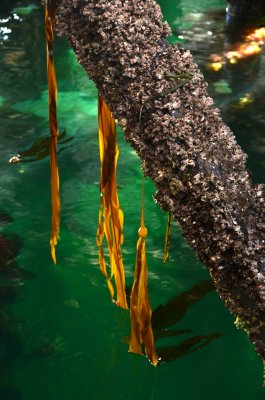 I quickly retraced my steps and grabbed my camera. The angles of the beams, the swirling water and life forms intrigued me. It was difficult to shoot one handed while hanging on to the lifeline with the other, but well worth the effort. 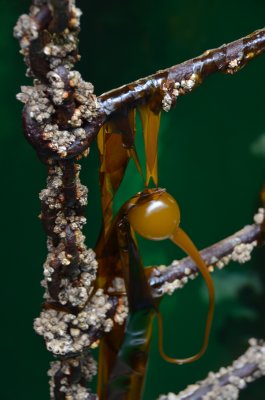 I was inspired. I began to explore some of the other docks of the ports we frequent. I remembered my visits to Astoria, Oregon whose wooden wharves and docks run the length of town. What other treasures could I find down there? 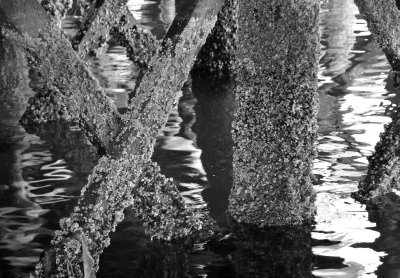 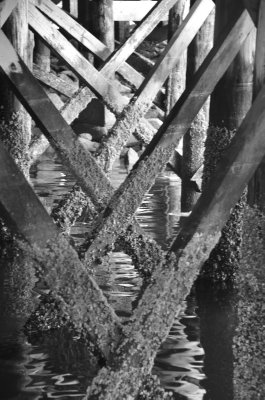 Wooden docks have character. I like the angled beams. Look at the hidden artistry that goes into each beam. The master builders have done well. The longevity of these docks is a test to their ability.

I’m beginning to see a reoccurring theme to my nautical pieces. I love the lore of the sea as much as the sea itself. 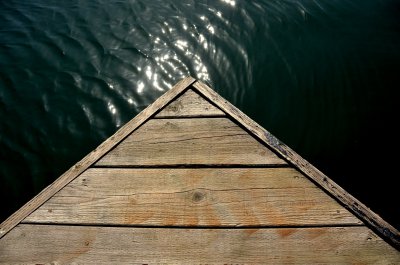 Have you ever gone for a stroll on a wooden dock? The thumping sound of feet on the old wood rings true. It sounds like a heartbeat, but it is just one small sound of the orchestra. Go for a walk in an old marina early on a Sunday morning. Listen to the distant calls of gulls, ravens, and eagles. Hear the sound of lapping water against the hulls of the moored vessels. Smell that salty air. Feel that cool air on your face. Mooring lines creak as they take strain against the ship. Look at the old vessels - see if you can find a wooden hulled ship. There is probably a fisherman quietly gearing up for the day. Say hello to the harbor cat as you pass by. Walk to the end of the wharf and look out at the distant sea. Sip your hot coffee.

Coastal towns thrived because of good harborages and docks. If you look at the layout of most ports, you will often find, ““Market Street.” or “Water Street.” These streets had bustling markets and often became the business district. That is because of the dock, and the importance of trade via water.

This is just the beginning to my explorations of these wonderful structures. I’m surprised I haven’t given them much thought before this, but I inspiration strikes as it will.

As I’ve been working on this piece this week, Alaska has ripped open a bag of beautiful views and has thrown them all over the place. I’m sitting on some of the most gorgeous pictures I have to show you the underside of some old, dirty docks. Now that’s good blogging practice! Look for these photos and accompanying words within the week.