A Spontaneous Jaunt to the High Country

I was reading one of my literary heroes this morning, when I came across a quote that inspired me, and sent me on the day’s journey. In Bruce Chatwin’s classic The Songlines he quotes Anatoly France who said, ‘It is good to collect things, but it is better to go on walks.’ Brilliant! I was quite taken with this bit of wisdom. Instead of sitting around collecting dust, I would go for a walk. It was decided and done in seconds.

I put on my adventure pants, wool socks, hiking boots, long sleeved cotton top, favorite wool sweater, zip up hooded sweatshirt, light wool gloves and watch hat. I grabbed my trusty hickory walking stick, and started walking up. Up is one of the two directions I can really go from my cabin. I could go down, but that leads to town, and I’ve already gone that direction. No, today with such a motto to live by, I went in the harder direction and started climbing up the steep side of the gulch my cabin sits upon. I didn’t have any set destination, I just figured that sooner or later, I would get to the top of the hill, and I’d take it from there.

I broke every rule there is to hiking, especially winter hiking over unknown terrain. I brought no map, GPS, water, lighter, cell phone, head lamp, food, extra clothing or shelter. I didn’t let anybody know what I was up to, and left no note or indication of what direction I went, aside from my foot prints. I didn’t bring my camera or binoculars, journal, or anything else other than what I wore, and my trusty stick. Thoreau and Muir would have liked my simplicity.

I knew all of this. It wasn’t an oversight, it was a decision based on my circumstances. I was under literary inspiration and wanted immediate action. Spontaneity can yield amazing results, and I was gone before I thought too hard about it. I figured I didn’t need the essentials for this trip, after all it was just a walk. The one thing I did bring with me was the proper mindset for walking through unknown territory. I was very much aware of my surroundings, and thought my way through the woods. By being aware of where you are, and keeping track of the land features you pass, you can walk a long way and return on the same path by retracing your remembered landmarks. It’s a good exercise for your mind and a good habit to get into, even if you are in familiar territory. In his must read book, Deep Survival: Who Lives, Who Dies and Why Laurence Gonzales describes this method perfectly.

So up I went. The side of the gulch I live on is a steep, rocky, heavily wooded forest (mostly white pine and spruce). It has sunken pits and talus piles from the old mines that used to operate here, and is crisscrossed with a multitude of switchback logging roads, old mine roads, trails and animal paths as it ascends into the high country.

I was overdressed and immediately began sweating from my effort (another no-no for winter hiking) . I figured if I kept moving, and didn’t have any unforeseen accidents, that it wouldn’t be a problem. It was tough going uphill. The hillside never leveled off, and had slick footing from the frozen ground that collected a thin layer of fresh snow the night before. It was beautiful and very peaceful. The forest was a temple, the air cold and still. Silence. A silence that only winter in a deep wood can produce. A peace that can only be found in a quiet wood. Very light snow was falling softly and it collecting on trees. I pictured a winter forest surrounding a Buddhist monastery in the mountains of Japan. I really felt peace here.

I stopped often, catching my breath for a few puffs, then moving on. Eventually, my upward climb reached a small unused logging road. It switch backed up the hill off to my left. I logged the spot as landmark for my return trip and started following the trail up the hill. Trails usually make hiking a lot easier, and this was no exception.

I began to see elk hoof prints following the same path. Elk, I’ve come to realize, are very wise. They know where to walk, and they have good taste in sleeping areas. They usually take the easiest path, and I felt it was a good omen to be walking where an elk has. The trail was overgrown and had numerous small white pine growing in the middle of the road. This was another good sign for me, It’s good to see nature taking back the land. The trail suddenly opened up in a small clearing on near the top of the first incline. The sun was shining and it was good to be in the high country. I sat down on a log and took a well earned break.

I wasn’t tired. I was still energized and felt the upward pull of the mountain, so I followed the elk tracks up the next incline. Fifty feet up the trail, on my left was a flat area, with fantastic views over the countryside. It overlooked a nearby gulch, the clearing I had just rested in, and Silver Valley far below. There were numerous elk prints and flattened icy areas where the elk had bedded down. What a great place to sleep! I moved on, not staying too long. I hoped my scent wouldn’t bother the elk, as it does most of the women I know. There was nothing I could do about it, and began the uphill trek up the next incline. Snow was settled here, about 5 inches deep, giving me good footing to help my climb. I was fairly quiet on my climb, simply walking lightly and breathing easy. This effort to be quiet paid off, as I was rewarded with an unexpected sighting of a bull elk.

This year is the “winter of the elk” for me. I’ve had numerous views of these magnificent creatures on my trip west, and got some great photos of them in Yellowstone National Park. I had stopped at an intersection of trails, my upward trail was bisected by one that followed an even contour on the side of the hill. About one hundred and fifty feet away, I saw the tell tale, dirty cream colored rump of an elk. Then I saw the heavy rack of antlers, and knew it was a bull. He plodded off, seemingly unconcerned. He just wanted his distance from me, and I didn’t blame him. More justification for spontaneous rambles.

I crested the incline onto another road, this one with snowmobile tracks running along it. I was way up in the foothills now. I could see Kellogg and the freeway far down below. I gauged how far up I was on the north valley wall of Silver Valley and saw that I was nearing the top (of the north side). I made another mental marker and started following the track on the next incline. It went straight uphill, and it was easier to walk on the side of the track than on the beaten down, frozen prints of the snowmobile. I stopped, leaned on my stick and saw a flock of birds land high up in upper branches of a white pine. I remained still, and tried to identify them, but couldn’t. I counted 10 of them, and they were content to forage as I watched them.

I decided to test them. I made a small whistle through my teeth, “Schreeeet, Schreeeeeet, Schreeeeeet.” One of the birds broke away from the flock and flew to a nearby tree; attentive, curious, and ready to sound the alarm bell. I waited. It waited. I whistled again. This time, all 10 of them flew to the tree and waited. I couldn’t identify them. They were still too far away to tell, just some grey colored birds. They made no song, or call, so it was hopeless. I did enjoy watching them, however.

I moved on. It wasn’t long before I began to see trail signs marking the snowshoe trails of Silver Mountain Ski Resort. I also saw that I was on the ridge road, a road that follows along the south rim of the Silver valley. Off in the distance, I spied the number four chairlift climbing up to Wardner peak; I had hiked all the way to the ski area. Now I knew what was up on the hill from my cabin. I was satisfied and ready to head back down.

The hill I had just climbed was quite steep, and it was hard to keep my momentum in check going back down. The track was too slippery, so again, I walked along the side of it. It was too steep, and soon I was running down the slope. Remember as a kid, eating Captain Crunch? Remember the first 10 bites, when you couldn’t hear anything else because of the sound of your teeth chomping down on the dog food like texture of the cereal? That was all I could hear as I bounded down through the hard packed snow: “CRUNCH CRUNCH CRUNCH CRUNCH CRUNCH!” It sounded like I was eating the cereal in fast forward as I speeded up, happily letting my legs out run my momentum. It was a fast way of getting down, that was for sure.

I negotiated my way back down, following my foot prints through the snow, and my mental markers when the snow ended. To be honest, I got a little sidetracked on the way down. To get to the cabin, I had to aim for a high point on the other side of the gulch. It was a recognizable hillside, that I could see from where I was. The cabin was in line between where I was and the middle of this hill. I didn’t follow my mental path, I opted for an easier route, and it threw me off course a bit. Soon, I didn’t recognize where I was. I knew I was close, but I didn’t know if I should veer left or right. I made it down to the road, and saw that I was within 200 feet of the cabin. Not bad, but I should’ve trusted my instincts instead of chasing the will o’ wisp of the easier way.

One of the comments from my Wardner Beginnings entry was from A. Kuehn He gave me some observations about the Wardner House, and cautioned to “tread softly, and the land can teach you.” I believe I lived up to his billing today. I learned it was possible to hike/ski from Silver Mountain all the way down to my cabin if you followed the correct paths (and if there was enough snow). I learned the wisdom of the elk; they know where to walk in thick woods, and pick good places to make their beds. I relearned to appreciate the deep silence of a wintry wood. I learned that those birds, whatever they were, have a lookout designated to keep an eye out for trouble while the group forages. I learned what was on top of the hillside. Most importantly, I learned that collecting things is good, but it is better to go on walks. 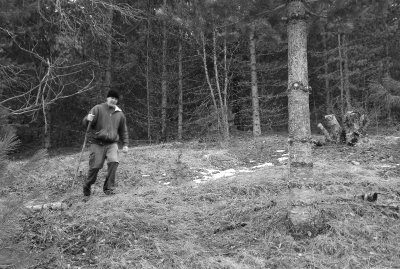 ‘It is good to collect things, but it is better to go on walks.’, adventure pants, watch hat(?), yea! I love it! thanks for sharing!

tom,have you ever read the book "Dogs, puppies and blue northers" by Gary Paulsen? A very short read, but one I think you'd like.