A Love Affair With the Sea

A Salute to the Aquatic

“My lady’s seas are heaving -- her breath a fifty-knot gale force wind. I step down from the lido after spending ten minutes in her wild embrace. My hair is tousled, my clothes all askew. I’m lightly perspiring and my face is flush with excitement. I’m a bit woozy, yet grinning like a mad man. I feel like I’ve just finished having great sex. I am ALIVE, by god, and there isn’t a better feeling in the world.

Am I weird? Does anyone else have a job that makes them feel this way? Y’all need to get on the ocean…”

Isla Tortuga lies north of Santa Rosalia on the eastern side of the Baja Peninsula. In two successive weeks, we had unpredicted gale force winds hammer into us just north of this island in the middle of the night. It’s almost as though the Sea is telling us, “No More! Go Away!” We wisely turned around and ran for cover. After spending the rest of the week trying to hide from the wind, it finally succeeded in chasing us back to La Paz, where we dropped off our guests and called it a season. 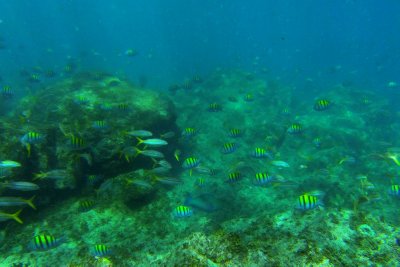 Yep. I’ve fallen in love again. I’ve been smitten with the under water world of the Sea of Cortez. Have you ever fallen in love? For me, it was stranger than normal, what with having to put on diving fins and a snorkel. I think the feeling of breathing underwater is a lot like being in love. At first, it feels a bit odd. Something like, “Holy shit! I’m in love with someone.” But after awhile, you get used to it and begin to explore further. All right. That’s enough terrible love metaphors for now. What is this, my Valentine day spectacular? 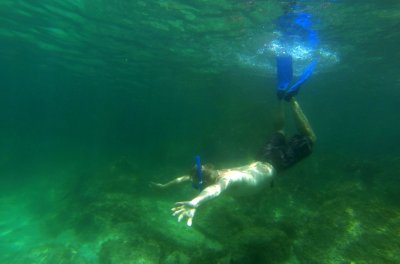 I tried to become a fish. This is my last week in Mexico, which means it is my last chance to enjoy the sun, hot beaches and relatively warm water. In fact, my rallying cry was, “Sleep Less! Explore More!”

This lack of sleep made it hard to make it through my shift, but I kept finding reserves of energy to get on the beach when my shift ended. I’m good like that.

It’s good to have a diving buddy when snorkeling. My friend Cassidy is one of the best. She’s part mermaid, which makes her extremely knowledgeable about all things aquatic. This is very useful when trying to determine the name or type of species of I’m looking at. I can ask her, “What kind of sea star is that?” And she’ll have the answer without fail. “That’s a Bradley Sea Star.” And so it is. 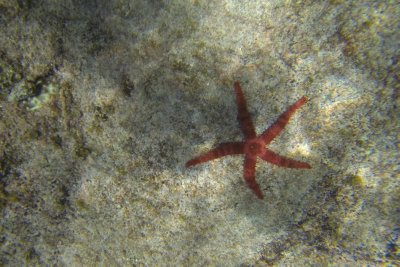 Either she’s a fountain of knowledge or she’s gifted liar. I wouldn’t know the difference.

My sessions have been great. I’ve explored little nooks of underwater rock around Islas Santa Catalina, Espirito Santo, Carmen, Partida, Danzante and Puerto Escondido. Each location has its own charm. Each session has its own flavor. At each spot, I came out gushing about some new undersea creature I haven’t seen before.

The more I snorkel, the more confident I have become in my explorations. I’ve gone out in snuffy seas with heavy chop and calm days with hardly a ripple. I love being underneath the swells. I love the pull of the current and waves. I love being in the breath of the ocean. I know I’ve said those words before, but they continue to ring true.

It’s especially fun to time a passage over some shallow tops of boulders. I would wait until the wave came through and then launch myself with it up an over a tall boulder using the strong current to propel myself to the other side. One must never fight against the ocean, but instead get with it and use it to your advantage.

The water temperature is warm. It’s about the same temperature as Lake Superior is at its warmest in early August. While other folks swim around in wet suits, this explorer needs only his adventure pants for protection.

These photos cannot do the beautiful reefs of Baja justice. However, they will at least give you an idea of the various life forms found in these vibrant waters. Some of these photos were taken by Cassidy O’Bryant (the mermaid) and used with her permission. 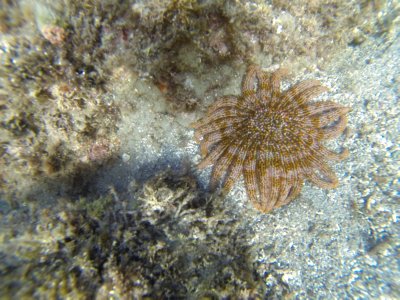 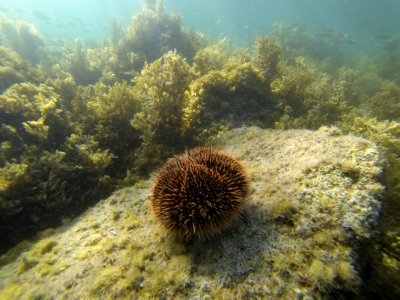 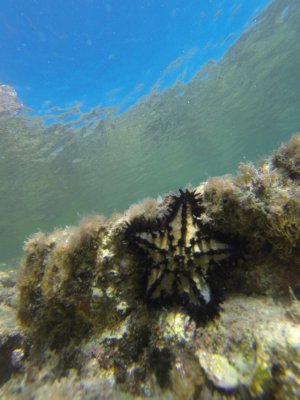 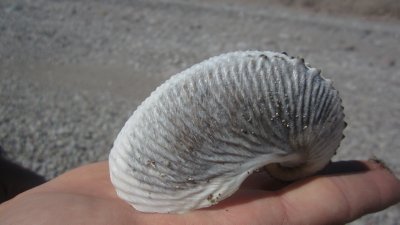 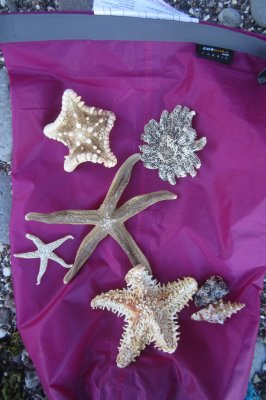 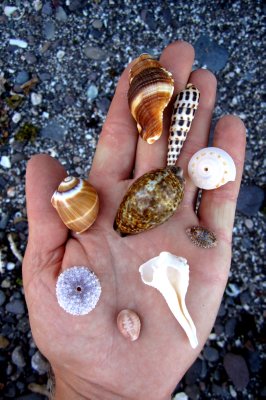 I love the discarded stuff of the sea. I have a special attraction (obsession) with seashells. This collection is from a small one hundred yard section of beach that we called, “Jackpot Beach” because of all the treasures we found there.

A Crown of Thorns and Corral Structure 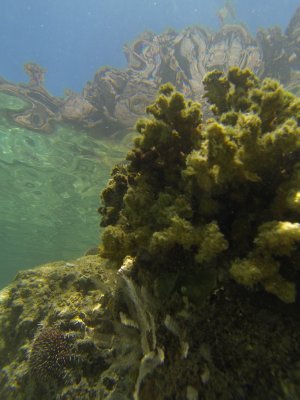 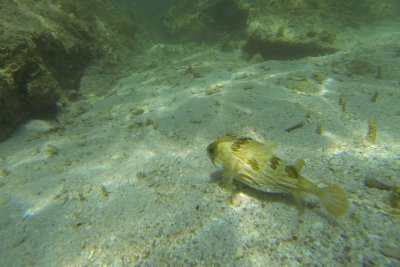 I think The Beatles put it best, “I’d like to be under the sea. In and octopuses garden, in the shade.” This would suit me just fine. Alas, my snorkeling days are over for a while. I’ve left Baja for the year. I’m heading northward to Alaska. While the snorkeling could be amazing there as well, I doubt I’ll be wearing only my shorts and fins to explore those undersea realms.

If you want my advice, I suggest you take a walk by a rocky piece of ocean. Even if you don’t go for a swim you can still check out the tide pools. 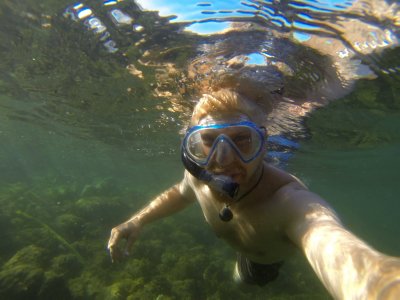 As for me, I’m off to Alaska. To get there I have ten days of open ocean positioning, followed by twelve days of exploration through British Columbia. I can’t wait.