On Buses, Thinking Too Much and the Unpredictable Future

I’m inspired. I would give almost anything for a pen right now. Sadly, I am pen less (which is almost as bad as penniless), and my journal remains unopened. Ah well, I’ll have to do this electronically and transpose it to paper later. This is the opposite of how this normally works.

I’m on a bus rolling north on Interstate 35. I’m a passenger. Why am I not a “passager”? Why is that “n” there? Now that is a perfect example of a bus thought. I’ve spent a lot of time on buses and trains this year. I’ve gone from the top of Michigan to the middle of Florida by bus or train. This has given me a lot of insight into the nature of this style of travel.

Parallel streaks of water slide down at a 15-degree angle from the top of the window. It distorts my view. The heavy gray ceiling hangs over drab landform of the plains below.

I’m listening to tunes on my I-pod. My songs: “Truth” by Alexander. “Some Say I’m Not” by Mason Jennings. “Skinny Love” by Bon Iver. “How to Disappear Completely“ by Radiohead. “Islero“ by Crooked Fingers. The music creates a soundtrack to the movie of my life. I picture past events and put music to those moments. I’m vain enough to think it would be a cool video.

A minute ago, we passed an abandoned farmhouse and barn along side of the road. It would have been an easy scene to establish mood in a photograph. Three “D” words come to mind: Decay. Decrepit. Dreariness. Sadness hangs over that place, even the trees don’t want to grow. I wonder about it.

The dark afternoon suits my temperment for this ride. I’m a bit hung over today. I’m also a bit tired. Last nights adventure took my nephew, his future bride, and myself into downtown Kansas City. We ate and then went to the Blue Room over in the Jazz District. Have you heard of the Blue Room? It’s a Kansas City landmark, right on the corner of the Jazz District. Many Jazz legends have played the Blue Room. The proof hangs on the wall in the form of vintage black and white band photos. The music is good, the mood is light, the conversation flows. Two events surprise us: Free cake and a saxophone player. The latter being a musician of modest fame, who happened to be in town, and was packing his horn. The former was delicious. Both surprises are delightful.

My memories, the soothing landscape and my music are the order of the day.

On Thinking Too Much

Buses offer a lot of time to think. Alan Watts reminds us that, “A person who thinks all the time has nothing to think about except thoughts. So he loses touch with reality and lives in a world of illusions. I’m not saying thinking is bad. Like anything else, it is useful in moderation. A good servant, but a bad master.”

What do I think about? My future. As a Zen free spirit, I find it amusing that I suffer from mild anxiety about my short-term future more often than I want to. I haven’t convinced myself that there isn’t anything to worry about. Everything will work out, as it should. Ram Dass has mused, “Isn’t that interesting? Far out, I still get uptight about this.”

My finances are dwindling. I may have to give up being a mariner. I don’t have another job lined up yet, though I am working on it. I’m tired of trying to figure out where to go.

These thoughts aren’t all that scary. I don’t know why I’m worried about it. I offer them to give a little insight into the mind of a wanderer. My life is different from most, and sometimes its not easy living on the very edge of stability. I feel like I’m coming to crossroads of my life. I can’t see the next path, yet, but I sense it is there. Which path should I take? And there’s the rub. 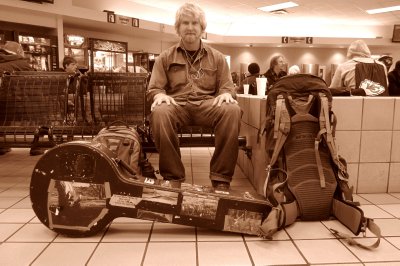 This last paragraph has brought a smile to my face.