Knee Problems, Planning An Exit Strategy, What I Learned in Argentina, Thwarted By An Orange 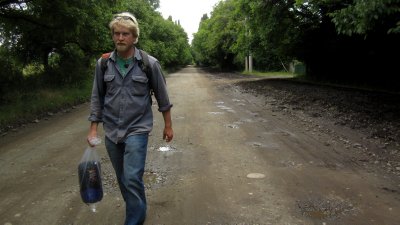 With one-step I was walking, the next, I was limping. I didn’t think much of it, my left knee has bothered me for years, and I figured this to be just another episode. Throughout the week, it has slowly been getting more painful. It began to limit my mobility, to the point where I could barely lift my leg. Enough was enough; it was time to take care of myself.

With my mind made up, I told my farm hosts the bad news. They understood, offering me any assistance I needed. My hosts and I had a hard time communicating with verbal language during my stay. However, the language of hugs spoke loud and clear.

I decided to head back home. This is somewhat tricky, because I don’t have a home. I’m homeless. However, I figured I could call on friends and family to put me up for a bit, while I recovered. There’s nothing like the unconditional safety net of a good family to land in. In family, I am blessed.

My Last Sunset In Bolson 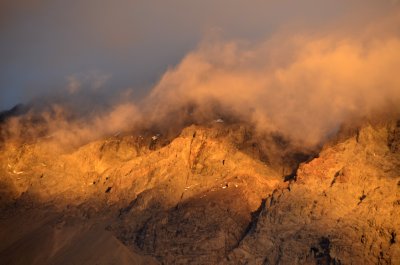 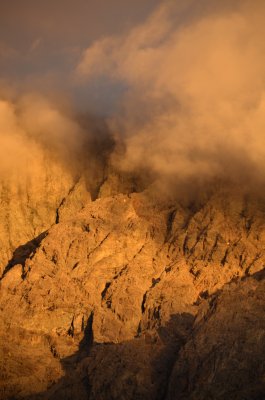 The mountains around Bolson are incredible. I will be back.

My next task was to organize an exit strategy. My first job was to change my airline ticket. Once I had a fly out date, I knew when I had to be in Buenos Aires. I made the call and found out the only real option I had was to fly out on the 30th, which I opted for.

This left me two days to get to Buenos Aires.

Sometimes my life seems to fall into place without any effort at all on my part. Think of an autumn leaf that finally let go of the branch. It floats easily on the air as it spirals downward to the ground. It's seemingly a short journey. Just before it hits the ground, its trajectory takes it over the river and the colorful leaf lands with a silent plop in the dark waters. It is the beginning of another grand adventure!

The morning of the 28th went something like this.

Bing, bang, boom. I went from a stationary unknown position, to sitting comfortably on a cama class (sleeper class) bus that was winding northward along the east side of the Andes. I smiled. I love traveling by bus.

I looked out at the mountains, and felt a mix of yearning and acceptance. More than anything, I wanted to explore those mountains. I could barely walk on flat ground, much less steep and rocky mountain trails. I sighed. The mountains will have to wait.

I turned introspective. I had on the right music for proper bus trip musing, and was soon lost in memory. Here are a few things I learned in Argentina. 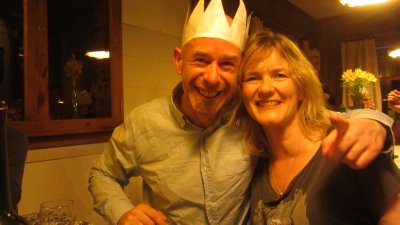 There are times when I should keep my mouth shut. I joked with a great Irish couple who I had dinner with a couple of times, “I should’ve had my top teeth glued to my bottom teeth when I turned sixteen.” Seamus understood my plight, and told me he was fluent in “idiot.” He would translate for me when I needed it. I thanked him for his kindness and we all laughed.

The WWOOFING experience was awesome, but next time I would find a farm that spoke English as well as Spanish. I wasn’t ready for total immersion Spanish. There were many times when everyone was laughing, but me. I didn’t understand the joke.

I should never purchase a return ticket before a long trip. Life flows fast and unexpectedly. There is no reason to try to contain it.

Be prepared for the type of travel you want to do. It was killing me not have all of my trusty trekking gear for this trip. I should’ve planned better.

Don’t worry, things will work out. The proof of this statement was that I was sitting on a bus cruising to Buenos Aires. 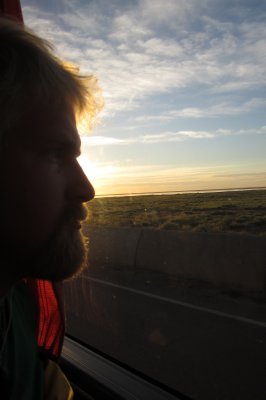 The bus ride was enjoyable and uneventful. I listened to music and lectures by Ram Dass and Alan Watts. I heard several pod casts of This American Life, The Moth, Stuff You Should Know, Stuff You Missed in History Class, and Radio Lab. I watched the sun arc over us. I dozed off. I wrote in my journal. I watched the landscape change as I crossed from the mountains, to Patagonian scrub, to the Pampas, to the city. I slept. I ate. I only had five hard-boiled eggs for the journey. I grew hungry enough to eat the meals they handed out. Lunch was good. I had mashed potatoes, some sort of beef patty, a sandwich, and jello. Dinner was inedible. It was supposed to be lasagna, but I think they mixed it up with the road kill. No matter, beggars can’t be choosy. 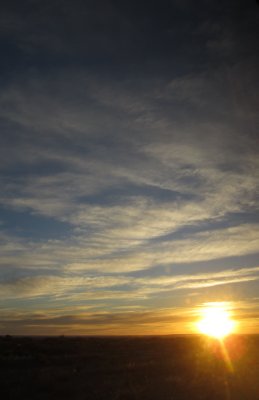 I arrived at the BA bus station at about 8:30 in the morning. It was a 23-hour bus ride. I’m sure I looked like I had just spent 23 hours on a bus. A trusty cabbie must’ve seen my weariness because he hauled me off to the cab counter before I could decline. I paid for my ride. He led me through the bustling terminal to his car. We drove through northern Buenos Aires and dropped me off at my hostel. Man, that was easy.

I don’t really want to talk about my stay in BA. The hostel was a shit hole. It was probably the biggest shit hole I’ve ever stayed in. What do you expect for twelve bucks a night? I was a bit grumpy from lack of sleep, the shit hole hostel, and the fact I couldn’t explore Buenos Aires like I wanted to. My knee kept me stationary. However, one can’t appreciate the good without going through some shit holes now and then. I still have my health, my humor and my positive attitude. I survived a tough day, and moved on.

After a long day of waiting at the Buenos Aires airport, I boarded the night flight to Houston. It was a ten-hour flight, and I watched “Beverly Hills Cop,” before falling asleep for the rest of the trip. When I awoke, we were a half hour out of Houston.

I only had about an hour to get through customs and security before my next flight would leave. It was going to be close. I stood in line and waited patiently for my turn. There was no point in getting antsy, I would make the flight or I wouldn’t. I had made it through customs, and they asked me if I had any food, and I told them I had an orange. They asked me to go to the x-ray room for more questioning. After more standing in line, I gave them my orange. They let me pass.

After security, I had ten minutes to try to make my flight. I decided to go for it. I started limping as fast as I could down the corridors. I can limp pretty fast when I need to. When I left the transit train, I had four minutes left. Houston passengers will talk for years about the “Blonde Blur” that whizzed by them on New Years eve 2012. I reached my gate. I asked them if I was too late. They said, “You’re too late.”

I would’ve made it had I not mentioned the damn orange.

I smiled. I enjoyed the thrill of the airport chase. Fortunately, I had planned for this contingency. I thought that I might not make the early flight to LA, so I booked my flight from LA to Chicago for 11 pm. This would give me plenty of time to get to LA, without having to rush. My reward for my foresight consisted of an upgrade to a first class on my flight to L.A. four hours later. I love it when a plan comes together.

The only bad part about missing my morning flight was that I missed continuing a conversation I had started with a beautiful woman I had met before I had boarded the plane to Houston. Damn it. I guess it wasn’t meant to be. 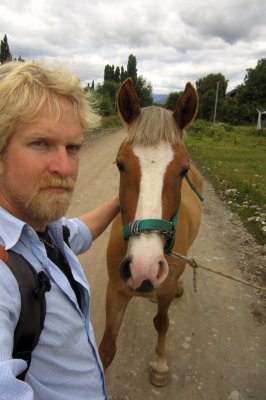 So it goes, and so do I. Tomorrow I’ll be among my family once again, and getting ready to take care of my knee.