WWOOFING in El Bolson, The Best Hostel In The World, and Life On The Farm

Many moons ago, I was thinking about what I would like to do in Argentina. Not only did I want to see the sights, but I wanted to make my trip more meaningful than sticking to the tourist trail. My first idea, was to take Spanish lessons somewhere in the country. My second, was to try WOOFING, also known as, working on a farm. I joined WOOFING Argentina (www.wwoofargentina.com). I searched through dozens of farms, and created a short list of those farms that appealed to me. My deciding factors consisted of location, type of farming, length of stay, and language. Then I narrowed the short list down to two farms. I wrote them a query letter, and one farm invited me to help them.

The farm I chose is located just inside Chubut province, about four kilometers south of El Bolson. Bolson is a small bohemian farming city situated in a lush green valley between two ranges of mountains. I heard good things about Bolson during my travels. I arrived five days before I joined the farm to explore the valley.

The Best Hostel in the World

La Casona de Odile is the best hostel in South America, if not the world. There are many reasons for this, but my favorite reasons are its location and the sense of community among its visitors and staff. 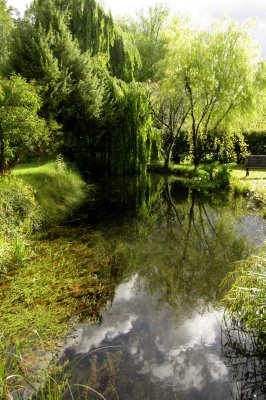 The hostel is located five kilometers north of Bolson on a beautiful piece of property the owners have cultivated into a wonderful park. It is a peaceful place.

The park reeked of Zen. The moments flowed past like the trout in the stream that meanders through the garden. 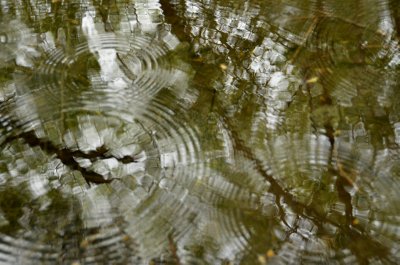 1. I sat next to the pond and watched tiny droplets of water plop into the surface of the pond. 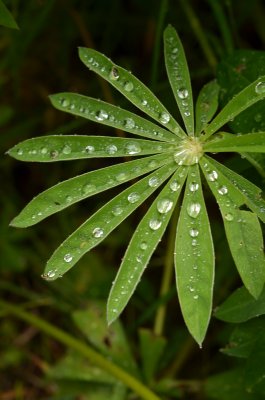 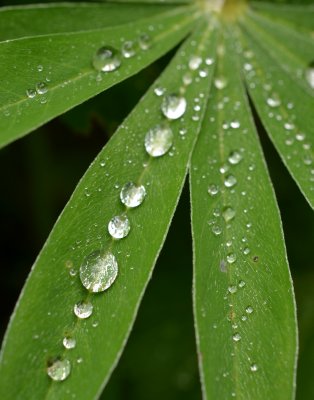 2. I slipped through the plants to find diamond droplets of water on the green plants after a rainsquall. 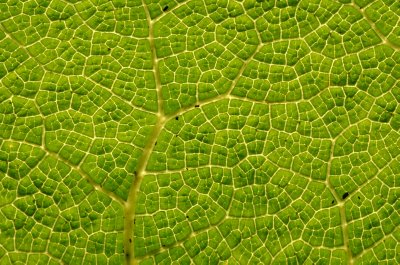 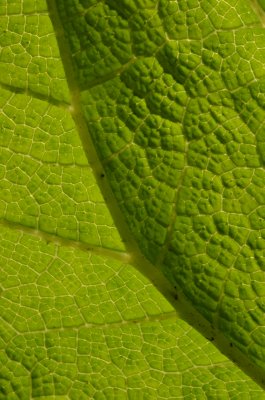 3. The sun came out and I hunkered in the shade of the brightly lit plant so I could see the veins and cells of plant. It looked like I was looking at the earth from space, but it was only a plant from inches away. Nature has a way of repeating patterns though out its realm.

When I arrived at Odile, I set about unpacking, getting clean, then making dinner. There was a group of eight people laughing, and cooking dinner together in the spacious kitchen. At first, I thought they were all traveling together by the way they interacted. I later learned that all of them were traveling alone, and had met here at Odile. After I had finished my dinner, they invited me to join their group and try the fondue that they were enjoying. The conversation bloomed, and it wasn’t long before I was firmly entrenched within the group. 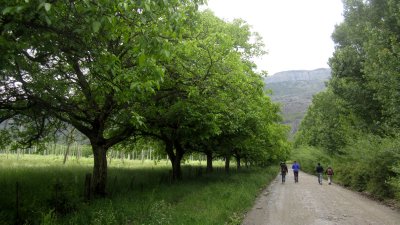 We spent five days exploring the valley, laughing, playing cards, slack-lining, cooking, and eating. Food brings people together, and we spent a lot of time together- eating and drinking. 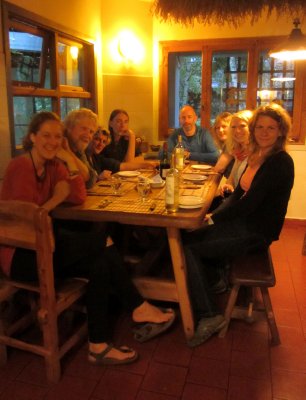 This is why hostels are great places to stay. It’s a funny thing about hostel traveling. Good people come and go, and with each new person who arrives, the group dynamic changes. It gets a new flavor. It’s great. But at the same time, it’s hard to say goodbye. I hate saying good-bye. 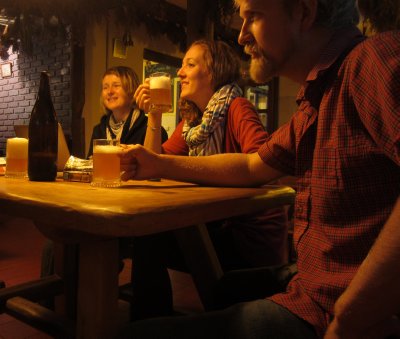 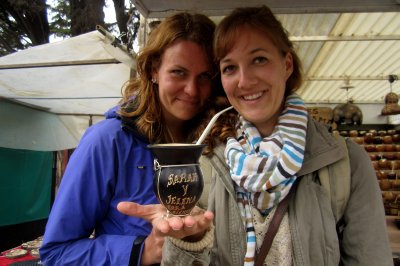 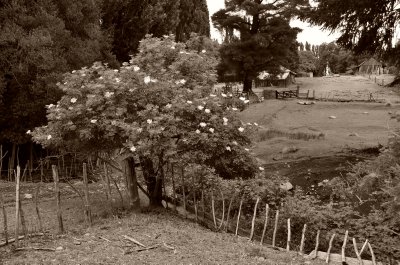 When I stepped out of the cab, my host greeted me with a warm two-minute barrage of Spanish. My deer in the headlights look must have been awesome. I had just imbedded myself into an Argentine farm run by a family who spoke no English. Ha! Take that, Thom!

I met my workmates, Cristian (from Chile), and Virginie (from France). Cristian quickly became my savior, as he can speak some English. He took me on a tour of the farm, and showed me the basic operation. Let me tell you, this is one beautiful farm.

The name of the farm is Granja Los Pinos. The farm is productive. It is growing raspberries, potatoes, black currants, walnuts, cherries, apples, flowers, and a vegetable garden. There are three dogs, lots of cats (only one of them is a cool cat), sheep, chickens, and several flocks of loud birds. It is located on the foothills of Cerro Piltriquitron, and has a lovely view of the mountains and surrounding valley.

I’ve been on the farm for four days now, and so far, it is as good as I hoped it would be. On weekdays, I work for six hours a day. The morning runs from 9:30 in the morning to 12:30 pm. We’ll take a three-hour break, cooking a large family style meal that we eat together. The conversation flows fast. I sit quietly trying to understand the scope of the conversation. I understand about every seventh word, but I’m hoping to narrow that down to every fourth word by the end of my tenure here. Then we’ll spend the afternoon working from 3 pm to 6 pm.

The work is easy, and we take a very relaxed pace.

The Morality of Nut Cracking 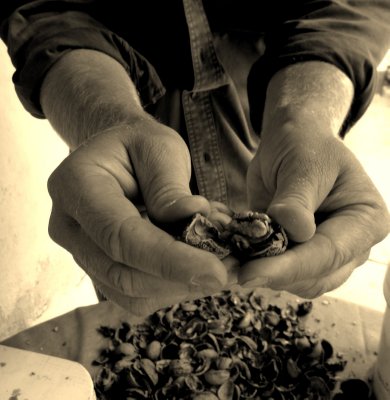 It has rained every day since I have arrived in Bolson. When it rains, it is our job to crack open dried walnuts and sort the nuts into two piles- good nuts and bad nuts. At first, nut cracking is straightforward. One person cracks the nuts, the other two people sort them. After a couple hundred nuts, I started thinking about the philosophy of nut cracking.

Cristian told me that, “After you crack 10,000 nuts, you will gain enlightenment.“ I told him that, “If you live in the moment, you only have to crack one nut.”

On the third day of nut cracking, the morality of what we were doing entered the conversation. Cristian asked me, “I want to know what this nut did to be bad.” I didn’t have an answer. 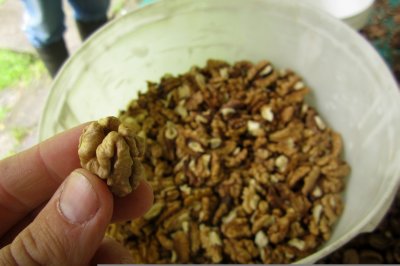 Who are we to decide if it’s a good nut or a bad one? Am I going nuts?

A Language All His Own

The most difficult part has been overcoming the language barrier. It hasn’t been a problem with the work, Roly will take us to where he wants things done, and tell Cristian what to do. I can tell what he wants done just by the tools we have and the short demonstration we are given. No problem. But, I feel like I’m missing out on getting to know my wonderful hosts. They are warm, engaging, and fun. However, I still don’t know what they are saying.

At lunch one day, Analia asked me, “Who is Odile?” I told her a rambling rendition of taking a bus from Calafate to Rio Gallegos before riding all night to Bolson where I found the Casana de Odile. Her daughter asked the question again in English. To which, I realized my mistake. I’m not trying to be an idiot, it comes naturally.

The other day after my friends and I had eaten, I eloquently asked, “How much cheese, please?” My friends and I were almost on the floor laughing about that one.

Cristian asked me, “What do you call a small ship?”
“A boat.” I replied.
“No, no, no, a small ship. What do you call it?” He said. I offered other words that mean the same thing.
He then rephrased his question, “What kind of ship would you put on a fire, the osada?”
That’s when I realized he was asking about sheep. Argentine’s use the young sheep for their barbeque dinners, and he was asking if we do the same. We both laughed, and I explained the difference between ship and sheep. For fun, I added chip and cheap to the conversation too.

The good news is that I am improving. Cristian has been giving me Spanish lessons throughout the day, and we will talk about it over tea when the day is done. I have a long way to go, but I’m on the right path. Immersing oneself into the Spanish language is not easy.

On Cold Showers and Leisure Time 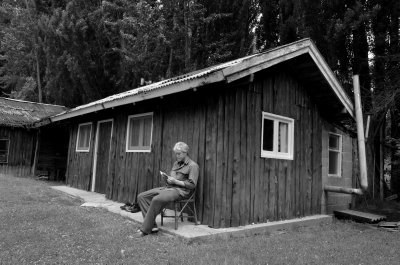 On the first day, I took out my slack-line and set it up between two trees. I showed Cristian the basic steps, and he was soon walking the line. Yet another fish hooked. I think Gibbon Slack-lines should pay me a commission for the number of people I have gotten addicted to this sport. 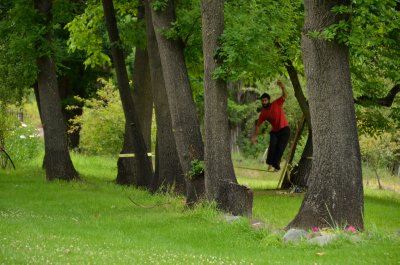 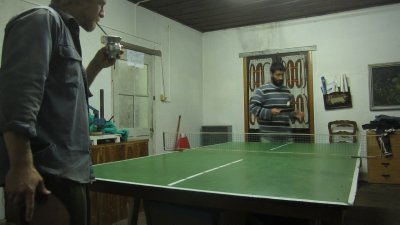 There is also a great ping-pong table in the workshop. Cristian and I have been playing each other in the evenings. Last Friday night we played ping-pong, drank matte, and listened to Argentine radio for hours. I like Friday nights up on the farm.
On my first night, I went into our small rustic bathroom and turned on the taps to run the shower. The water that came out was only slightly warmer than a glacier waterfall. I figured I had turned the wrong one on. I turned that one off, and twisted the other knob and waited. The water temperature didn’t change. I really wanted a shower. I exhaled, and started working my body under the freezing water. It was a fast shower, but I felt better.

Afterward, I asked Cristian if we have hot water in our cabin. “Ahh. We could, all you have to do is ask for it. I like cold showers; It’s good for the body, no? Everyday it feels colder.”
I laughed, and then I halfway bought into it. I reasoned that there are people in the world that have never had hot water in their lives. Why should I? This would be part of my challenge- cold showers for 3 weeks.

Two days later, I asked to have the hot water turned on.

I will leave you this week of some of my first photos of the farm. Happy holidays from South America! 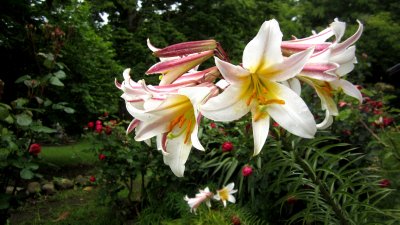 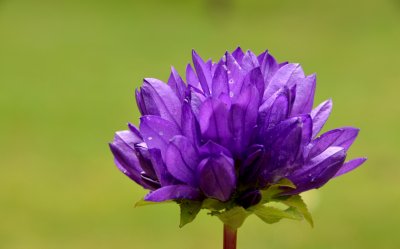 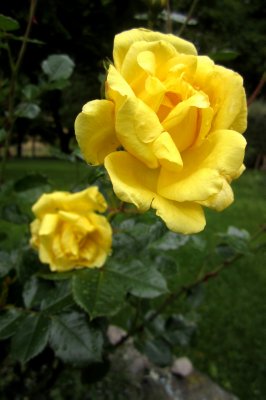 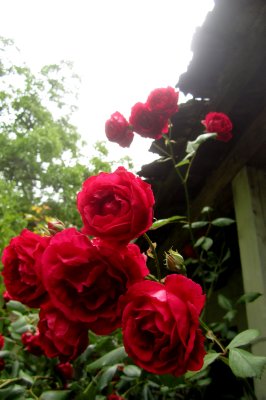 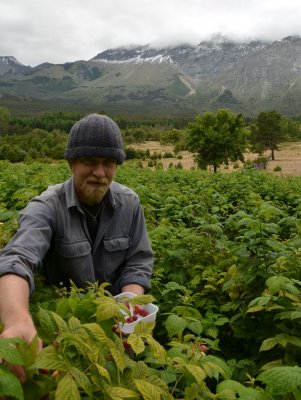