Opportunity, Parting Shots and Going Around The Horn

It’s hard to believe I went to Antarctica. Who does that? As we were winding up our last days on the continent, my travel companion and I compared notes on how much we’ve worked this year. I’ve worked five and a half months in 2012, and she worked six months. We both started laughing at our ridiculous good fortune. By the numbers, we should be living in poverty. But here we are, sitting in white robes on a comfortable bed, waiting for our next landing on the Antarctic Peninsula. It’s absurd.

My advice: When opportunity knocks on your door, answer it. 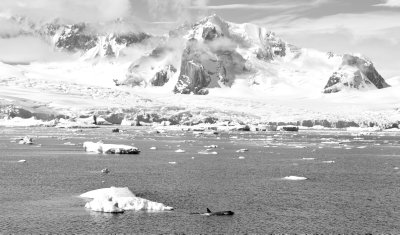 I didn’t see many whales around the peninsula, except for one pod of Orca. The orcas were on the move in search of seals. The seals like to bask in the sun on top of ice floes. The whales will search among the icebergs; spyhopping out of the water to see if any seals are hiding on top. In this pod, there were two males, one female, and one juvenile whale. 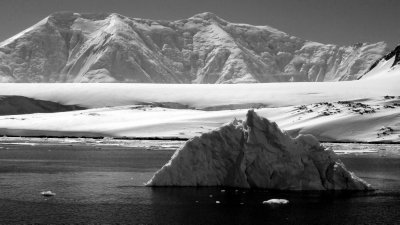 We had some outstanding weather on the trip. These shots are of the narrow passage that leads to Port Lockroy. The weather for the entire trip was amazing. There were several days in a row of brilliant sunshine with blue skies. Sunglasses and sunscreen were mandatory. 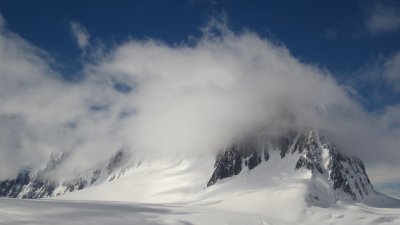 I didn’t expect the peninsula to be as mountainous as it is. I love seeing high mountains peaking out from heavy cloud cover. 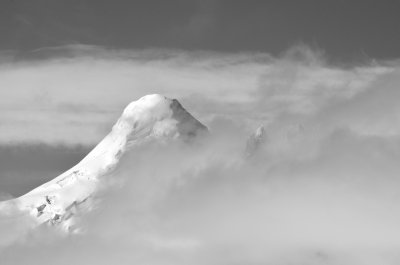 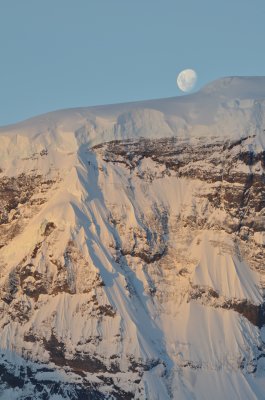 Penguins spend a lot of their day moving from one group to another, one place to another. Though wary, they tolerate humans so long as we do not get in their way. A penguin is busy this time of year, there are rocks to haul, nests to construct and mates to attract. 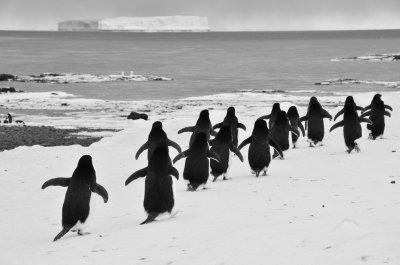 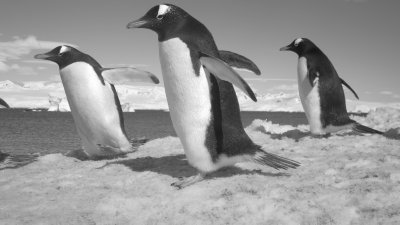 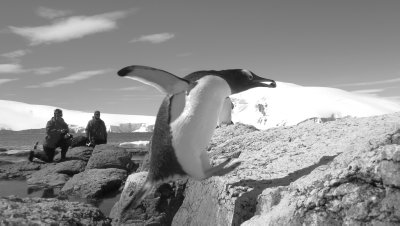 A penguin highway is a great spot to watch them. The highway is obvious, as there is a ten-foot wide discoloration on the ice, and it usually has a couple of penguins ambling back and forth upon it. I like to sit down right near a highway at a strategic point where the penguins have to by closely in order to get where they want to go. 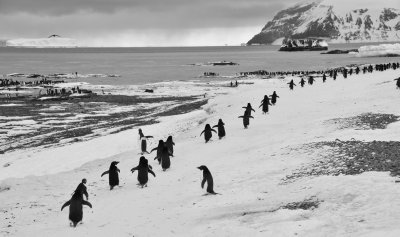 For instance, one of their paths wound up a rock ramp between the ocean and the main colony. I sat down right next to bottom side of the ramp. The penguins didn’t care at all. They waddled right by and allowed me to watch them from less than three feet away. 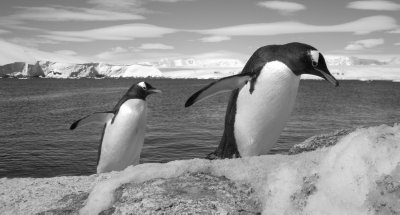 Brown Bluff sits at the extreme northerly end of the Antarctic Peninsula. Underneath this massive rock lies a large breeding colony of penguins. Like all life forms, a penguin must eat. To do this, they have to eventually get into the ocean and swim out to their feeding grounds. A leopard seal must also eat, and it knows the best place to catch penguins is between the colony and the feeding grounds. 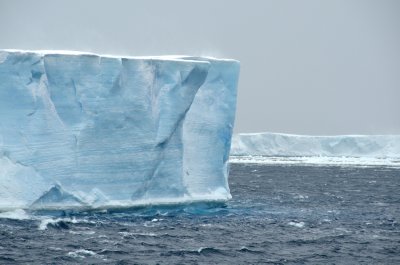 The leopard seal is very crafty, and uses all kinds of stealthy camouflage to catch the penguins off guard. He will hide behind bergs; wedging himself into a small crevice before launching himself at the passing penguins. He’s a menace to penguins.

The penguins know this, and fight back with numbers. At a rocky point, the penguins gather in the hundreds. They wait there until the lead penguin closest to the water decides to go for it. Then it’s a game of follow the leader, and the hundred penguins that were standing behind him launch themselves into the sea in a mad rush. It’s impressive.

The penguin mob began swimming out to their grounds. When penguins swim, they “porpoise” through the water, jumping out like dolphins to catch a breath of air before diving back down. I watched the penguins get further away from shore. They looked like they were going to make it. Then, in an instant, they turned 90 degrees to their original direction and began to panic. The leopard seal struck again.

The penguins raced back to shore. They began popping out of the water and recklessly landed on the rocks. They were scared. When the chaos ended, I could see the leopard seal thrashing the penguin against the water. It was somewhat sad, but that’s the way it goes.

We ended our explorations of the southern ocean by cruising through Drake’s Passage up to Cape Horn. This section of the world is unique. It’s where the Pacific Ocean meets the Atlantic and Southern Oceans collide. Our passage wasn’t bad. We had a good roll to our ship, but the seas remained relatively calm.

It was strange to see Cape Horn. Though I have read about it, I never imagined that one day I would be looking at the tip of South America. I had made it around the horn. What a strange life I lead.

In the old days of sailing, it could take months to make it around the horn, and many mariners did not make it. Hundreds of ships litter this section of ocean. Many sailors were never seen again.

Fortunately, our ship was not one of them. We turned northeast before turning into the Beagle Channel before returning to Ushuaia.

So ends one hell of an amazing life journey. In time, I may have more to say about this voyage, but I’m still digesting it. As one adventure ends, another begins. “Adios, Antarctica. Hola, Argentina.”