From Missoula, MT to Wardner, ID. First Impressions of My Latest "Home"

I got up early. The night before I had plans of leaving early to be on time for a full day of skiing at Silver Mountain in Kellogg, Idaho. Upon hearing my alarm, I immediately slammed it off, and resumed my slumber. So much for that. When I did wake up, I checked the forecast, and learned Lookout Pass would be snow covered and slippery. The pass marks the border of Montana and Idaho. I put my game face on, and loaded up with a double shot mocha and coffee cake for breakfast. I drove north by northwest towards the pass through snow and low lying mists.

The scenery from Missoula to Idaho is very pretty with the highway following and crossing the majestic Clark Fork River half a dozen times or so, I forgot to count. The trees were mostly pines and dusted with an inch of west snow causing the branches to bend under all the weight. It was very pretty in the fog. The damnable misery of freeways is you can’t stop where a decent photo happens. The best you can hope for is an ideally situated rest area. No such luck.

The last time I ventured up this pass, I was delayed for 6 hours by blocked up traffic. The snow had caused some semi’s to get stuck when trying to get up over the pass. Apparently they didn’t want to be troubled by putting on their chains. Fools. They closed down the freeway, stopping traffic for 6 miles. Authorities had to tow them up with big Ford Trucks. So that’s why I took this last leg of my journey a little more seriously, expecting the worst.

It was really much ado about nothing. Roads were slick, but I managed a healthy 45 miles and hour though the worst of it. Way up on the pass, the sleet turned to straight rain, and I drove the rest of the way to Kellogg at the legal limit.

I procured the keys to my new home, and drove off up through the rain and fog to Wardner. Wardner is an old mining village that adjoins Kellogg. My cabin is located on the side of the upper valley wall at the top of a gulch. I drove up the narrow single lane road wondering just what I had gotten myself into; the sides of the road dropped off steeply on one side of the road, and just as steep up the hill. Not a place to drive off the road. I pulled into the drive, and stepped out into the rain. The cabin was there, and I grabbed the keys and went in. 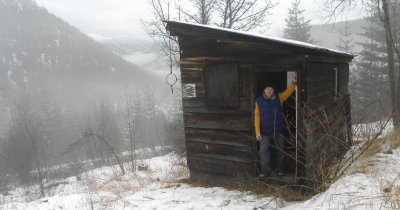 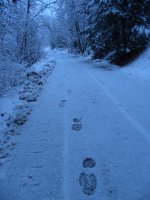 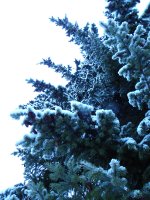 I loved it immediately. Updated and clean, it still has rough hewn original timber through the rafters. It is comfortable, and has character. It has a woodstove which is important for the integrity and the athmosphere of a good cabin. There's something about about a cheery fire warming your cabin that I love. It doesn't have a TV or the internet either. I'll miss the internet, it's just too useful, but I don't miss TV at all. All I have is an old clock radio that I have tuned to the NPR station out of Spokane. It's great. The views are spectacular. As I said I’m the highest place around, looking down over the Silver valley. It’s a perfect location to make a comfortable base camp for the next 2 months.

I unpacked my stuff and got the cabin set up. I have a room with picture windows overlooking the valley. In it, is a day bed. A day bed is or less a bed, only not in a bedroom. It’s an ingenious invention as far as I’m concerned. I can lounge comfortably in good light reading my book, or staring vacantly at the distant mountains. Of course I have a blanket or two handy, in case my eyelids get too heavy, which they sometimes do after a morning of skiing.

I can’t make up my mind on what to call my cabin. “Wardner.” has a nice ring to it. I like to think of it as a similar set up to H.D. Thoreau’s “Walden”, but maybe I’m being a little too poetic for my own good. “Uncle Tom’s Cabin” also came to mind, but I voted against that one until I build a cabin of my own. I’ll give it a little more time before I decide, it’s probably best not to rush into an important decision like this.

The next day, I purchased my ski pass and went the next day. With all the rain that was falling down in the valley, it was snowing just as heavily up on the mountain. Silver mountain boasts the world’s longest gondola, leaving from Kellogg and climbing it’s way up to the ski area. It was raining when I stepped aboard, and snowing when I stepped off. What a day! Seven inches of powder fell overnight, and I’m guessing four inches fell during the day. I spent the morning carving first runs on virgin powder. It’s one of life’s little pleasures. I love powder skiing; playfully carving squiggles down a steep snowy slope, dodging trees while going through the glades of pine trees. It was fantastic. It was like skiing in a cloud, there was hardly any visibility at all. The trees were covered in a heavy snow, causing there limbs to bow downward. I was skiing through a sculpture garden. 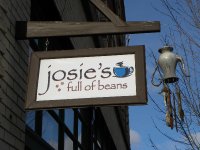 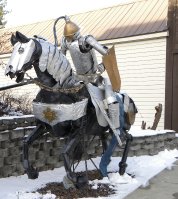 I’ve been exploring my new town some. I’ve found a nice little coffee shop with good cinnamon rolls, fresh coffee, and free wifi. It’s my new home away from home. I found Jerry Cobb’s dirt pile. I can imagine old man Cobb sitting around on his front porch yelling in his gravelly, grouchy voice at those passing, “And don’t you forget it!!” I’ve figured out which grocery store is better (Yoke's Foods). I’ve found a thrift store that is intriguing, it won’t be long before I’ll have to go in and buy something random. I’ve also had to bring the van into the local GMC dealer for some repairs. I’d been hearing noises coming out of the front end all through the journey over here. I have very few brain cells committed to knowledge of automobile parts and how they work, so my best bet is too ignore noises until they get louder. That’s what happened in this case, and I had to bring it in. They had to order a part, and so I’m trying not to drive much for the next week. Walking is good for a guy. 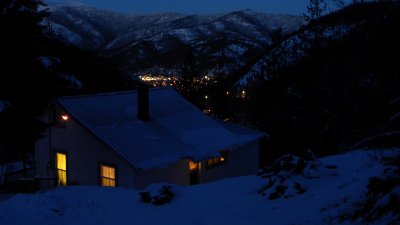 So I’m here in Idaho commencing my ski bumming career. We’ll see how it goes, I’ve never done this before. Usually this time of year, I’m nomadic. I like spending my time driving around the best of the west. Even today, I wanted to head out and drive to the west coast. I’m serious. It was such a beautifully sunny morning that I couldn’t help it. I have these urges to keep moving. Anyway, I talked myself out of that for now, and am digging my mountain views from my temporary home.

The place has a name. It is Wardner House. The land around the house has been known as "The Enclave". You may wish to call it something other. It is a special place with strong energy. Positive energy. Most don't feel it but it is there none the less. Wardner is not in a Canyon, it is in a gulch. You may ask what's the difference. You will learn. Wendy understands. She "gets it". Few others do. Tread softly there and let the land teach you.

I love your blog, both the pictures and the writing! It's inspiring, as I try and figure out some travel plans of my own.