My New Camera, The Alaskan Brown Bear, The Best of Glacier Bay in One Day, Humpback Whales, Favorite Shots

It feels quite good to have a solid camera in my hands once again. I was jonesing for a telephoto last week, and my withdrawal symptoms just about got the better of me. Somehow, I feel more complete. My camera is my tool that lets me share my world with you. Without it, I felt something missing. I couldn’t think of a better way to christen this new camera than by exploring the beautiful waters of Southeast Alaska’s Inside Passage through its viewfinder

The usual suspects came out to play this week. Namely, humpback whales, spectacular scenery, and close encounters with the Alaskan brown bear. 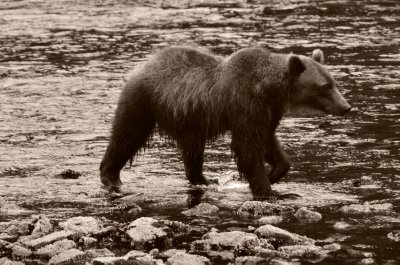 I’m squatting on my haunches in the sharp gravel along side a cold Alaskan salmon stream. There is a brown bear not more than fifty feet away. It’s well aware that I am nearby, but for now, I am not a threat. For my part, I am making damn sure that it doesn’t see me as a threat. I would ooze deference out of my pores if I could, just to assure this bear that I am not a menace. I’m quite calm. This is as close as I’ve ever been to a bear, and I’m enjoying myself- awed by the experience. 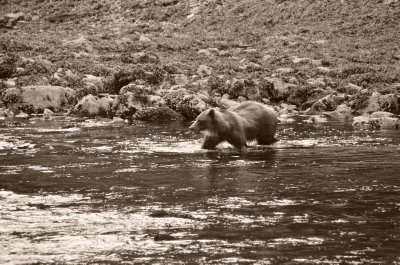 The bear is plodding along the riverbank. If a bear had musical accompaniment, I should think the tuba would suffice nicely. A bear walks funny. Its front paws are mildly pigeon toed, facing inward with every step. It manages to slink and lope at the same time. It bobs its head from side to side with each step, avoiding eye contact. A bear sees direct eye contact as a threat (much like my Finnish brethren). It’s easy to see the power of the bear. Its power comes from low to the ground in its thick legs and powerful fore arms. If I had only one word to describe this bear, it would be AWESOME. 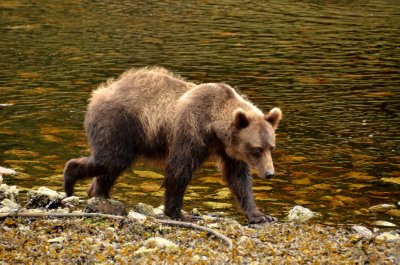 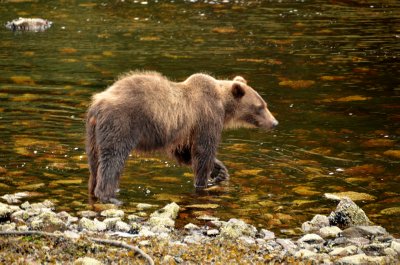 Its shaggy coat is a potpourri of different shades of brown. Its legs are the color of dark chocolate. They are wet from having just crossed the river a couple of times. Its back is furry brown with light tips. The brown coat is shaggy, matted and thick. One could even say it’s almost “grizzly.” 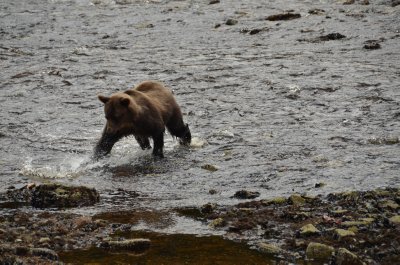 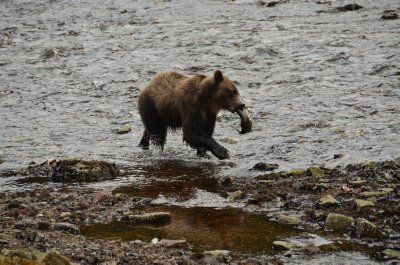 The bear is patient. It watches for salmon waiting to swim into the rocky shallows. When it sees a fish, it stiffens its forelegs and runs at the fish with a quick upright dash. With a lunge, it slaps at the fish with its front paws attempting to crush the fish. With a powerful slap, it crushed a salmon against a rock before grabbing it in its teeth. The bear carried the wriggling fish to shore and promptly ripped its stomach and egg sack and ate them. Bears make fishing look easy.

I don’t know if I’ll ever be this close to a bear again, so I take advantage of my proximity. I take many photos. The cloudy skies offer an even light. I like the brown of the bear against the tannin brown of the river. 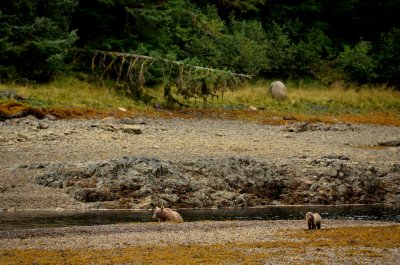 A mother bear reappears from past the waterfall. She has two cubs that she’s keeping out of sight from the male. The mother has a huge salmon gut, and definitely outweighs the male. I’m thinking if they got down to exchanging blows, my money is on the momma.

I’ve had a good morning. My plan for my day off was to watch bears at a close distance, and I’m very satisfied. As I walk back downstream, yet another bear appears across the river and saunters upstream to fish beneath the falls. On my side of the river, yet another grizzly is padding my way, some three hundred yards away. I think this is probably a good time to take to the water and make my leave. I bid the bears adieu, thanking them for their presence and tolerance. It is another Alaskan feather to add to my cap.

GLACIER BAY FROM DAWN TO DUSK

This was one of the finest days I’ve ever seen in Glacier Bay National Park. The day dawned bright and cheerful, and it remained that way until the sunset in the evening. I spent all day outside, coming inside only to eat my meals. I kept my camera handy, and the following photos show Glacier Bay at its best. 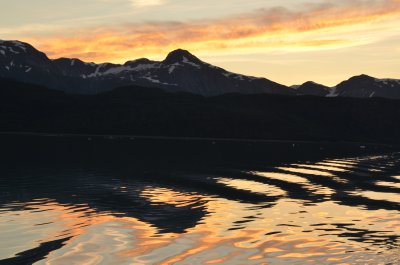 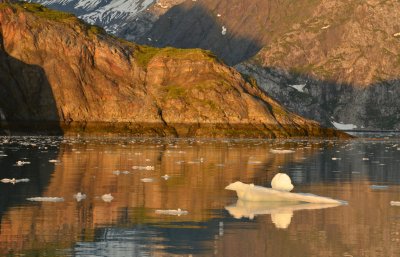 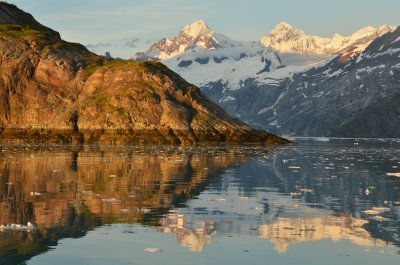 Jaw Point isn’t marked on any of the navigational charts, but everybody who ventures into the John Hopkins inlet knows of this jagged point of rocks. This was as pretty as I have ever seen it, bathed in strong morning light. 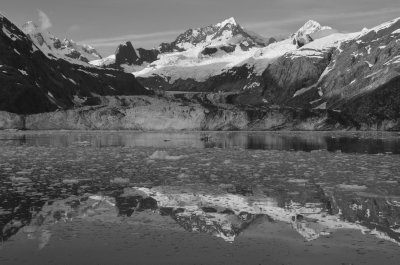 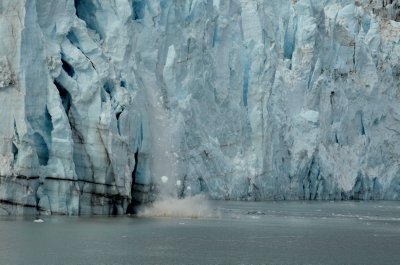 I once yelled at a glacier, “Hey Glacier, Glaciate!” And in that instant, a huge chunk of ice cracked off and splashed into the sea. I must learn to beware of my powers.

Orca in the Distance 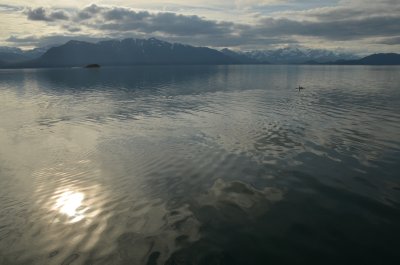 In the morning, while watching the sunrise, I told my friend Tiffany that we were going to see Orca whales later in the day. We hadn’t seen any in two weeks, and while it’s possible to see them in Glacier Bay, it doesn’t happen very often. However, I was inspired by the good vibes of the morning, and felt good about our odds.

At about three thirty in the afternoon, the call came over the radio that there were “aqua pandas” coming at us. I smiled and laughed. I waste all my wishes on the ridiculous. I could’ve wished for world peace or the cure for cancer, but no, I had to use it up on more whales. This big male passed right in front of our bow before swimming off in the distance. I love the clouds and calmness of the water. The orca was a nice touch.

Frat House of the Sea 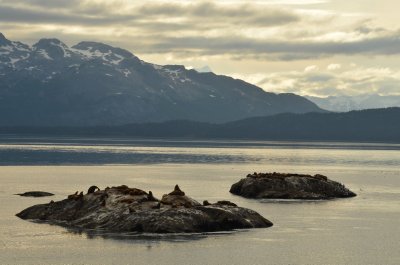 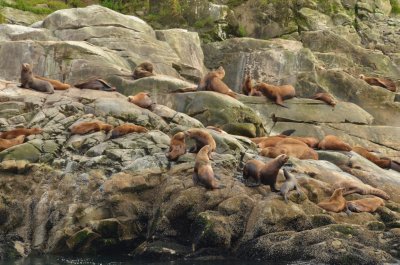 I don’t know why it took so long for me to make this connection, but my friend Siri and I came to the conclusion that stellar sea lion haul outs are the ocean world’s equivalent of a college frat house. They smell like a frat house, they look like a frat house, and it sounds like a frat house. Stellar sea lions make the most disgusting sounds imaginable. They belt out a loud chorus of elongated belching, dry heaves and farts. The air stinks of excrement and rotten fish. The rocks are covered with large males jawing at one another trying to prove who the alpha male is.

Sunset over the Fairweather Mountains

It is a fitting end to a beautiful day. The Fairweather mountains were all aglow in the orange bath of the suns aftermath. Gorgeous.

I was talking to one of our guests about how beautiful the day turned out to be. She agreed, and said she would trade all of this good weather for a chance to see a whale. I told her, that not to worry, whales will come out in good weather and in bad, and I had a feeling that we would find some along the way. She smiled (she was very sweet) and said, “Okay, if you say we’ll see whales, I won’t worry about it anymore.”
I smiled. She was such a sweet lady, and I hoped for her sake that we would see some whales. Within hours, we were on a group of humpbacks that began bubble net feeding.

Later on in the week, we came to a place where dozens of whales were spouting all around. In a five-mile radius, there were probably over forty active whales. It was amazing. That’s why the ocean is so incredible; I never know what I’m going to see on a given day. One day it can be orca, on another day, there will be bubble net feeders.

There was one whale that trumpeted with each breath at the surface. This trumpeting isn’t normal. A slight blockage to its spout causes this Louis Armstrong sound. However, the sound it made was awesome. It reverberated off the nearby hills in a long echo. It was so very beautiful.

Just before dinner, I found my friend and asked her if she had seen enough whales yet. She smiled, looked me in the eye, and said, “No.” I smiled with her. I know the feeling. To see a whale up close is an amazing experience that I will never tire of. 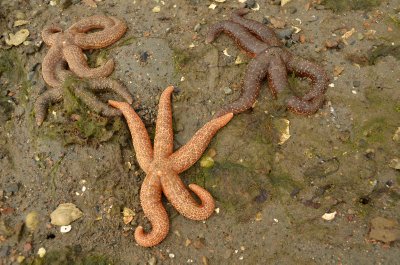 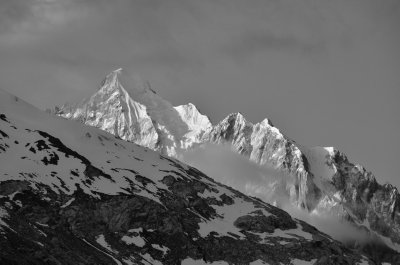 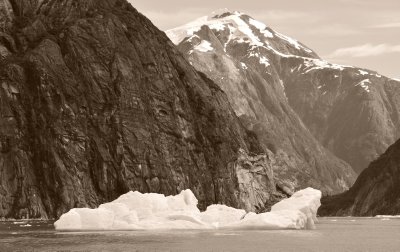 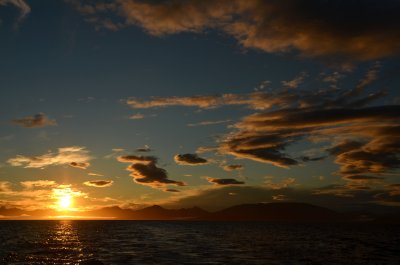 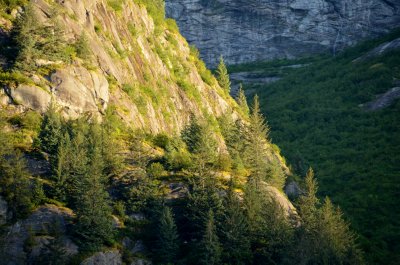 I like my new camera. It has served me well this week, and I look forward to sharing more views of this amazing world with you.

That bear on top looks so skinny. Thought they'd need to be fatter by now....beautiful scenery. I would love to go there some day.