Icebergs, Fox Fires, and Orca: An Alaskan Week to Remember

Kayaking in Icebergs, Euology for a Glacier, Fox Fires, and Orca 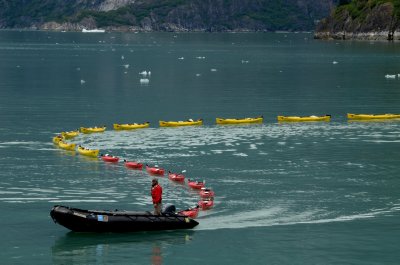 I could see the mass of white blue ice floating on the placid rain speckled water of Williams Cove from the fantail of the ship. I asked our Bosun if he would drop some kayaks for two of my friends, and myself. I slid into my raingear, and hopped into the shuttle that would take us to shore. 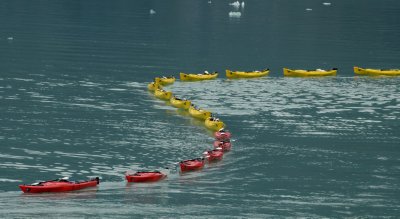 Now in the kayak, I paddled directly towards the massive blue iceberg that had drawn my attention earlier. It was even prettier up close. I love glacier blue. This color only forms in the ancient ice of glaciers. The glaciers are a living entity, though they are slowly passing away.

Eulogy for a Glacier 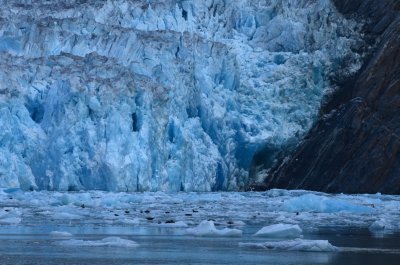 In life, a tidal glacier creates some of the prettiest landscapes on the face of the planet. The glacier spends thousands of years, slowly grinding and polishing dense mountain stone until it is a perfect. Sawyer Glacier (before it split into North and South Sawyer) was the master carver of Tracy Arm-a stunning array of angled rock, white ribbons of waterfalls, green water, and beautiful ice floes. 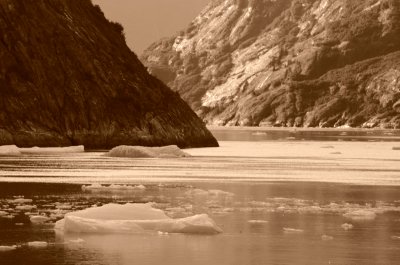 In death, the tidal glacier melts and disintegrates. As a parting gift, it sheds magnificent pieces of ice from its face that slowly melt into the sea. The cracking roar of white thunder signifies the birth of another berg. Once the berg settles, the tidal currents pull them away from the face and carry them out to sea. As children leave home, icebergs slowly disappear around the bend, never to be seen again. Over time, the tidal glacier retreats further into the fjord until at last the final piece of ice falls into the sea. There is nothing left but a rumbling creek, and the smooth rock of memories past.

A tidal glacier is unique, because it only creates beauty. Its life work is left to see in the short term exquisite melting of icebergs, and in the long lasting beauty of a fjord.

It is in the wondrous backdrop of Tracy Arm, that I spent my morning kayaking around stately icebergs. It was another Zen morning for me. I heard the sound of raindrops tapping the surface of the slate gray water with a tiny blip. Two ravens call in the distance. The watery sound of small waves lapping the ice was musical. The ice itself is exquisite. Each piece of ice was worthy to be on the wall of the Louvre. The seawater and rain have melted it into intricate shapes, and each piece could be a plate on the Rorschach test. 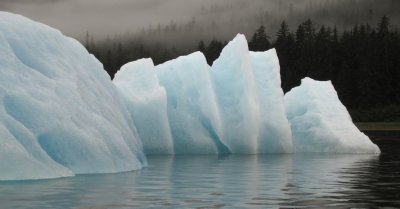 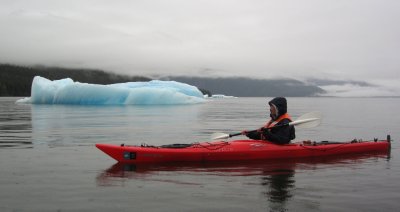 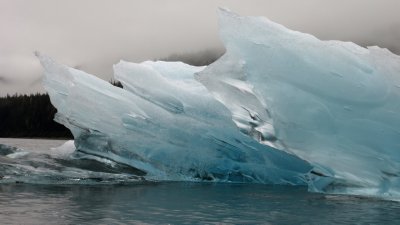 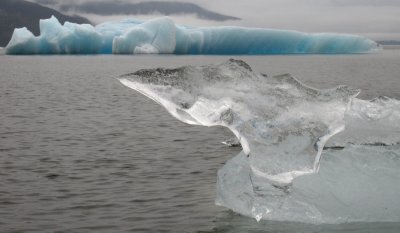 My friends went in search of warmth. I went in search of ice, and with it, Zen. I fell into deep breathing, satisfied to float around the bergs as the current would take me. I opened my eyes, and a leaf floated right to my canoe. I marveled at its vein system. Then I let it go. 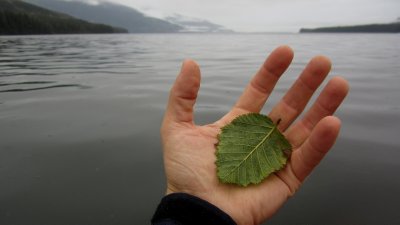 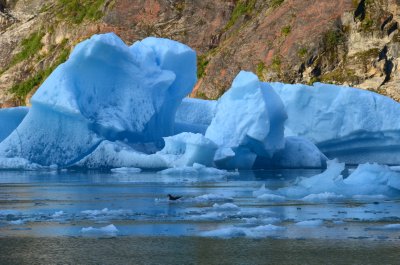 We visited South Sawyer Glacier right at sunset. We were deep in the fjord, deep in blue shadow. A giant iceberg glowed against the rich backdrop of sun-streaked stone. It was a beautiful a work of art, a sapphire set into a locket of fire. 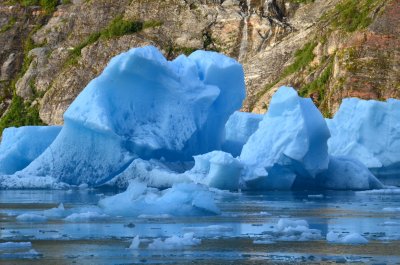 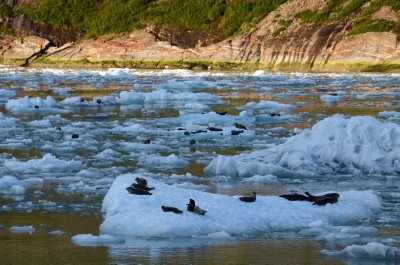 The face of the glacier held still. It looked as though the entire face could fall at any minute, but it held its piece, frozen and unmoving for the moment. Dozens of harbor seals were atop the ice floes, basking in the beautiful evening. The seals live on the floes, in front of the glacier. In real estate, it’s all about location. I’d like to meet their agent. 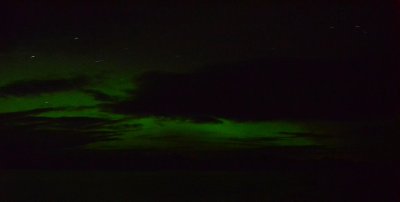 The Inuit call it “Fox Fire.” The phenomenon is more commonly called the “northern lights” (in the northern hemisphere). Astronomers prefer to call it Aurora Borealis. It has been many years since I’ve seen the northern lights dancing in the sky. And I’ve never seen it in Alaska. I’ve seen them three times this week. Last night’s show was amazing. At three thirty in the morning, I looked to the north and saw an intense column of green light. Then a halo appeared and began pulsing. I was in awe. I ran down to the bunks, and woke up my roommate, and two other friends to share the experience. It’s a gamble to wake people up, because the northern lights are a fickle entity. As quickly as they show, they can disappear -even on a perfectly clear sky. Luck was with me, and the lights continued to dance when I returned to the stern of our ship. My friends appeared, one by one, and I was glad to have awoken them. We stood in companionable silence in the chilly Alaskan night watching the dance of all dances. I wondered what ancient man thought of the foxfires. As they dance ended, I smiled. How lucky can a guy get? 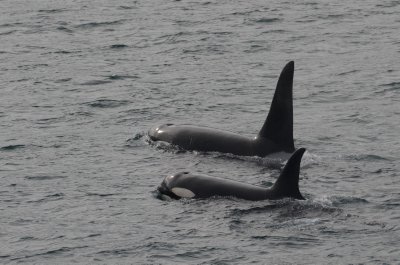 I’m working nights this week. I awoke around four, and headed up to the top deck our ship to eat my breakfast. It was a beautiful day. The air was cool. The sun broke through the high patchwork clouds, bringing warmth, and chill. I read philosophy aloud to a friend as we watched the Alaskan seascapes slowly change with our movement. 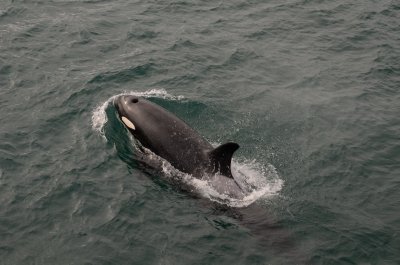 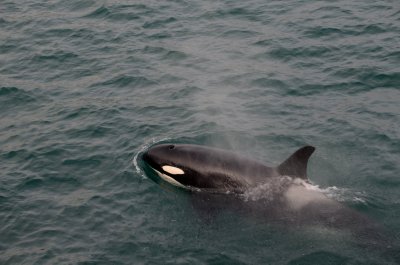 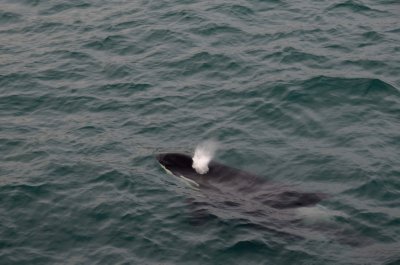 Then the boat slowed, and we spotted a pod of orca. I put down my philosophy book that I was reading to a friend, and we watched the whales for a while. Then, as they swam away, I went back to my book for a few pages. Suddenly, we heard the whale spout right next to us, and we jumped up to see them. They were right next to the boat, skimming the surface just underneath the water. Then, as a family, the big male popped up, followed by two females and a calf. It was amazing!

Needless to say, I’ve been eating a lot more breakfast up on the lido. There is no finer way to start my day.

To recap, this week I’ve seen six different glaciers. I’ve kayaked among icebergs. I saw a beautiful iceberg scene of seals, ice and sunset. I watched an orca pod for several hours. I watched humpback whales bubble net feed. The aurora borealis danced across my sky three times on three different nights, and I’ve shared it all with some great people.

Alaska. It’s such a small name, but it gives me such a big smile. 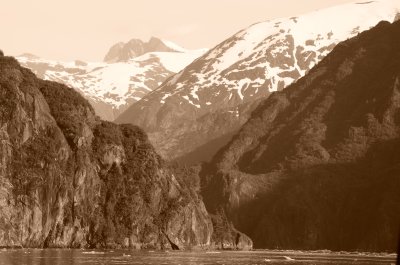 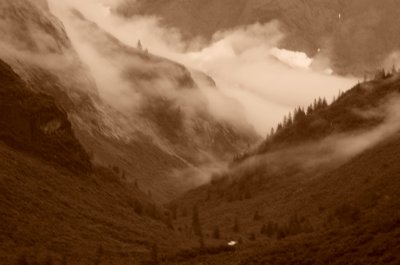