The Last Stop of My Springtime Alaskan Adventure

Have you ever been to Haines, Alaska? Haines was never on my Alaskan places to see list. I had seen it on a map, but breezed over it for sexier locations like Denali, the Kenai, Glacier Bay, and Tracy Arm to name a few. Fortunately, I have friends in Haines. And these friends who have collectively said, “Come visit us. We have a place for you to stay.” While I was figuring out the end game for this Alaskan adventure, I decided to go and visit my friends, which is how I ended up in Haines. 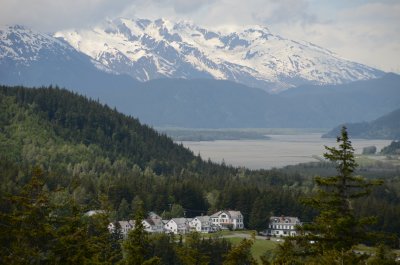 Haines isn’t an easy town to get to. There is only one highway into town, highway seven, that cuts south off the Alaskan Highway in the Yukon Territory. Alternatively, a ferry runs from either Skagway, or Juneau. I rode the ferry from Juneau, and recommend this option. Finally, you could take a small plane in from Juneau. Bank robbers aren’t making a fast get away from this outpost. 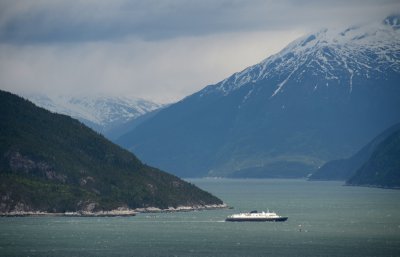 Haines carries a small town atmosphere. It is a refreshing change from the tourist ridden, knick-knackeries of Juneau and Skagway. On my first walk through downtown, I was struck by the modest appearance of its shops and services. There’s no flash to Haines, and to me that is its greatest allure. When I stepped into the nicely appointed shops and restaurants, the shopkeepers looked up with a smile and a genuine, “Hello. How are you?” The owners of the establishments were generally hard at work in the kitchen, stocking shelves, or running the till. They were an active part of the service, not hiding in an office somewhere or teeing off at the ninth hole (though after work you might find them at the local disc golf course).

The Alaskan pioneer is still alive and well in Haines. Many folks are living off the grid. They live far enough out of town where they don’t have running water, or electricity they didn’t make themselves. Some have to plan their day around the tides-meaning they can only get to town at low tide. They live this way by choice, and continue the pioneering spirit that has made Alaska what it is. Granted, modern conveniences have made homesteading “easier” than in times past, but they are still over coming hardships that most of us wouldn’t even consider. Compared to the overweight, red-bull powered, television worshipping couch potatoes that we Americans are (prove me wrong!), these folks are our equivalent of modern pioneers. I applaud their spirit.

The days are long in the early part of June. Daylight lasted for just over eighteen hours on my visit. Summer is the busy season, when everyone wants to cram as much work and play into their day as they can. Summer is a big deal to the residents of Haines, especially after surviving last winter. This past winter broke many spirits all around Alaska. There were records broken, or nearly broken all around the state and year round residents of Haines had their hands full all winter long. 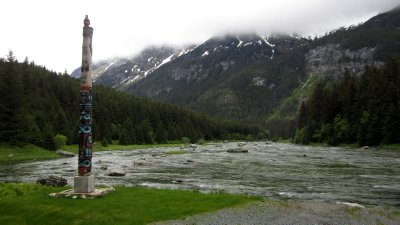 “I stood on the top of this totem pole,” my good friend Kathy told me, “that’s how much snow there was.” This was coming from someone who as of March 2010 had never seen snow before. She survived this past winter, and lived to tell the tale. She’s seen more snow this past winter than most people have seen in the last ten. Girdwood, located just south of Anchorage, received eighty feet of snow this year. Eighty feet! That’s incredible. 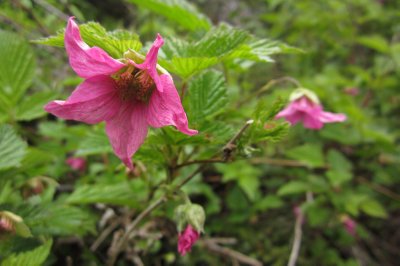 That’s why summer is so important to Alaskan residents. It gives them a chance to breathe a collective sigh of relief-no more snow shoveling for another five months or so.

Throughout my week, my friend Kathy introduced me to most of the town. “Hey Kathy, we saw you walking Frankie (her dog) and noticed you were walking with someone we didn’t know. We thought we’d see who it was.” I’d laugh, and Kathy would introduce me to someone new. In my line of recreation, I meet many people. The problem is, I’m terrible with names. So please forgive me if I remember your face, but can’t quite make the connection. 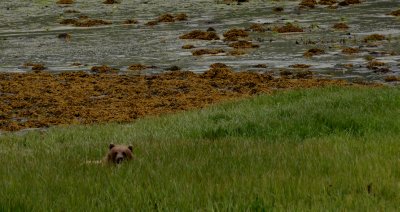 As you might imagine, I spent a lot of time outside during my week in Haines. I love the lushness of summer in Alaska. Though the summer season may be short, every plant, wildflower, shrub and tree makes the most of it by blooming to its fullest. The pure green of the lowlands meshed beautifully with the pale blue sky and snow covered mountains. Add in some wildlife, such as a humpback whale in the canal, or Brown Bears munching grasses on the shore, and you have yourself another gorgeous Alaskan view. 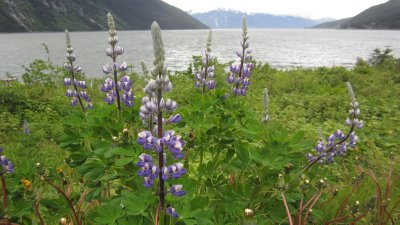 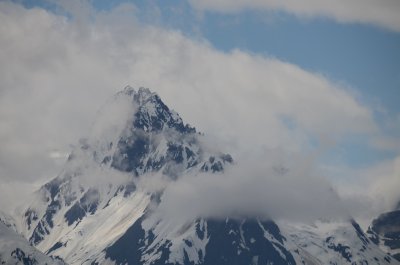 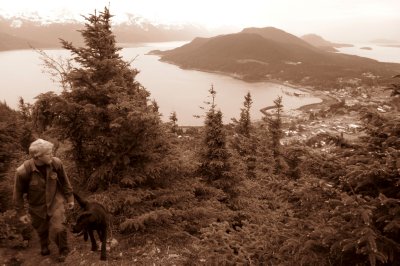 Though I didn’t reach the summit of Mt. Ripinsky, I hiked to the top of its ridge three times. One of the trailheads was one hundred yards from my house. I went up for a hike with some friends on a summit bid. On top of the ridge, the heavy snow pack made the trail hard to find, and slowed us down. We bush whacked our way around the backside of the mountain eventually finding the main trail which took us back to where we began. 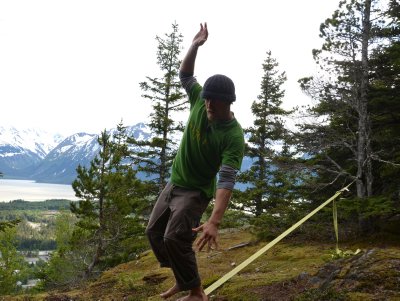 On two other occasions, I went up to enjoy the eagle eye view of the town and surrounding mountains and valleys. I also found a mossy clearing where I set up my slack line.

One day, the sun came out and my jaw dropped. Where once was a misty mountainous landscape obscured by clouds, there was now a brilliant mountain scene of blue sky and snow capped peaks. Then, the wind died down, and it became a perfect night for a barbeque. On the last day of shrimp season, a local fisherman gave Kathy a two-pound bag of Southeast Alaskan Coon Striped Shrimp that he had caught that day. We took them out to the head of Mud Bay, and after considerable effort, Kathy’s boyfriend started a fire using rain soaked wood. When the coals glowed orange, we pulled across a cast iron table over the flames and spread the shrimp on the grill. While they cooked, we watched the sunset, sipped PBR from a can (the Alaskan cheap beer of choice), and marveled at the beauty all around us. We pulled the shrimp off the flames with our fingers, yelping as we peeled off the hot shells. They were delicious! These freshly caught shrimp were some of the best shrimp I have eaten. 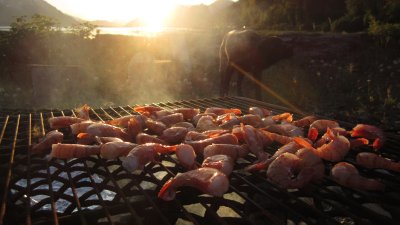 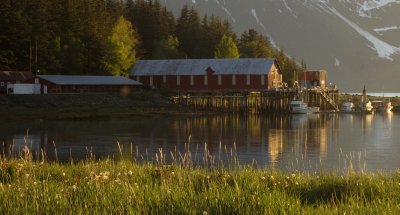 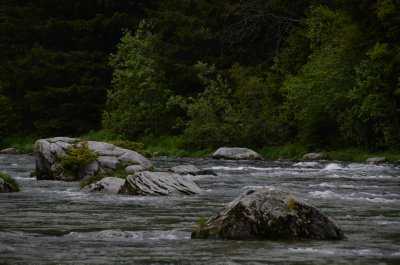 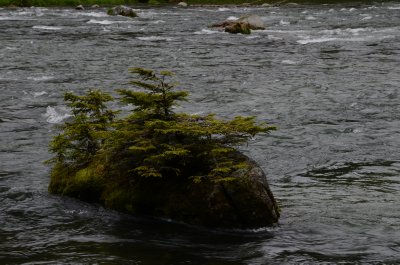 The Chilkoot River is a beautiful river that runs from Chilkoot Lake a short distance to the ocean. Anglers of the skinny two-legged kind and the massive four-legged kind frequent the river. Somehow, they get along, but I think the four-legged anglers are in charge. The Chilkoot is a very picturesque river. Wildflowers grow abundantly along its bank, as do spruce, and other shrubs. A high mountain ridge forms the backdrop, and skinny waterfalls tumble down its side. I liked the rivers boulders. They had character. Some even provided homes to small Zen pines, which reminded me of Chinese gardens that I have visited (see Sleep Deprived in Portland, Oct 2011). 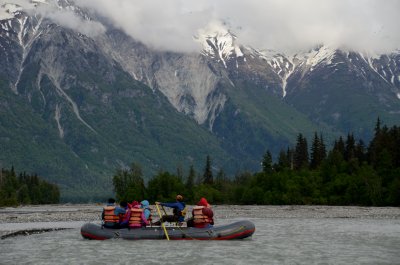 Through the power of couch surfing (www.couch surfing.org), I made a connection with a local raft guide who invited me for a float trip down the Chilkat river. The Chilkat runs through a beautiful plain surrounded by lush forests and mountain peaks. It runs several miles through an eagle preserve, and we had several great views of these magnificent birds. At one point, we saw an eagle sitting on a log. Our guide asked us to be quiet. We slipped slowly past within twenty feet of this bird! It was awesome! I’m still get excited by eagles, no matter how many I see. 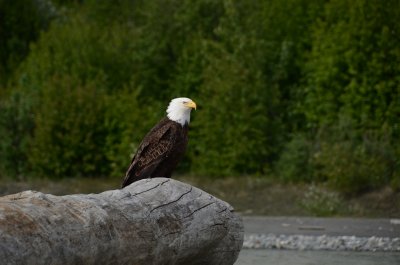 I enjoyed the trip, and I was glad I reached out to the couch surfing network.

It’s safe to say, I enjoyed my visit to Haines. A week wasn’t long enough, but it was time to move on. I wanted to head south back down to the lower forty-eight for a while to take in some warmer temperatures, and work on my suntan. I’ll be back in Alaska in August, so I won’t be gone for long.

I took the evening ferry from Haines back down to Juneau arriving just after eleven o’clock at night. My flight was leaving at eight in the morning, and I didn’t have a place to stay for the night. I didn’t want to spend money on a hotel, not for that short of time, and the hostel closed its doors at eleven. I decided to see if I could spend the night at either the Juneau ferry terminal or airport. As it turns out, sleeping at the terminal is common, though their doors close from 11 pm to 3 am. As I set up my bunk on the concrete, I talked to some of the other folks who would be sleeping out, waiting for their ferry the next morning. I wished them happy travels, and tucked into my sleeping bag. 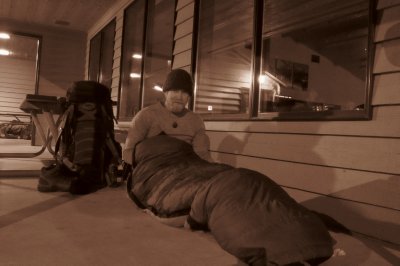 Haines concluded my Alaskan adventure for now, and I’ve just returned from a five day backpacking trek on Isle Royale National Park. In two days, I’m heading to Colorado for three weeks in the mountains. As you can see, not only am I trying to catch up on my writing and photography, but I’m also trying to make plans for Colorado and points beyond at the same time. So this week I will be putting out two entries to catch up on my adventures. Thank you again for your continued support. It makes me smile to think of all the good people out there cheering me on, and inviting me into their lives.

You life is amazing! Great Job!