I get up early nowadays. I’m used to Central time and here I am in Mountain time. So I’m up well before the dawn, rested and ready to go. I decided taking in the dawn in Yellowstone National Park would be an appropriate way to start my day. I packed my stuff into the van and drove south into the park. It was clear that it would be a nice sunrise, though not a dramatic one. I was driving east towards the Tower junction where I had planned to do some Nordic skiing on the Black tail Plateau when I saw 2 bull elk not that far off of the road. I quickly pulled over and turned off the van, and used my vehicle as a blind to take photos of the grazing elk just as the sun hit them. It was one of many Yellowstone moments I would have that day, though at the time, I didn’t know it. 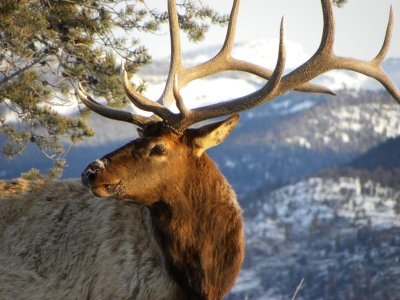 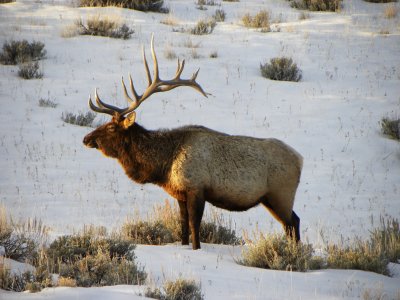 At the trailhead of the Black tail plateau, it was cold. It was Ten degrees above zero, and my ski boots were frozen. I had neglected to bring them into the hotel to warm the night before. It was like wedging your foot into a frozen rock crevice. Ah well, I figured the heat of my body would quickly warm them up, and so it did. I was about a half mile into my trip when up in the distance, about 150 yards away I saw a dog like animal trotting towards me on the trail. I instantly froze. At that distance I wasn’t sure what it was, it could have been a wolf, a coyote, a fox, or a dog. I didn’t want to take the chance on scaring it off sooner than I had too, so I held my position, still as a statue. It came trotting on, uninterested in me. I couldn’t believe it hadn’t smelled, heard, or seen me; it just didn’t care. Closer and closer it came, and I could tell it wasn’t a wolf. Not nearly big enough. It wasn’t a fox, as it was too big, and the tail was wrong. So then it had to be a coyote, as this was clearly not a dog. I tell you, it passed by me on the trail not 3 feet away from where I stood. Unbelievable. I decided as it passed to try and get a picture, I threw down my poles, shrugged off my pack, rummaged around and pulled out my camera. I turned and began shooting. Luckily for me, the coyote stopped and allowed me to photograph it. I watched it move further along, and it was joined by another that had apparently circled around me. They trotted away, I couldn’t believe my luck. The early bird catches the worm. Damn right. 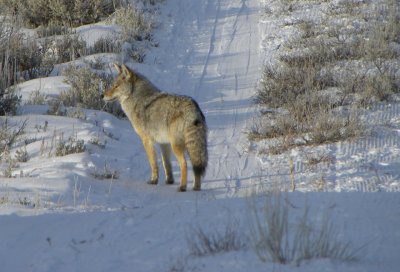 I continued on my way, striding for awhile, then tiring and slowing to a good plod on my skis, enjoying the day. I spied more elk on the next ridge over, grazing on the grass. I stopped under a fir tree and watched a downy woodpecker forage for its breakfast through my binoculars. It was a very still day, hardly a breath of wind. When I sat still and listened, I didn’t hear a thing. This is the Yellowstone I love. Deserted and beautiful, peaceful and calm, winter is the BEST time to visit this magical place. I skied on through the meadows working my way up a high ridge before I decided I had reached my apex. I was about 3 miles in, and with 3 miles back out, I figured this to be enough skiing for one day. I sat on a rock eating an orange watching the distant hills. I hoped to see more wildlife, but it wasn’t to be.

On my way back, I began to see other skiers coming my way. Every time I’d see one, I’d quickly start striding with enthusiasm, apparently trying to pretend that I was in great shape, and a competent skier. After passing them and alone once again, I down shifted into my usual plod, gasping for breath. I’m not sure why I was doing this, but there were a lot more skiers than I wanted to see, and by the end of the six miles, I was exhausted.

The BEST way to end a skiing jaunt in northern Yellowstone is to rest your weary bones in the Boiling River hot spring. I was smart this time and was already wearing my swimming shorts under my sweats, no need to hop around in the pit toilet freezing various parts of your anatomy. I quickly hiked the trail a mile or so upstream to where the Boiling River empties into the Gardner River. It’s easy to see, as a huge cloud of steam was billowing upward in the 18 degree air. I was lucky, the first soaking pool (which is the best pool) was more or less unoccupied and I stripped down and stepped into the soothing water.

I have to tell you, I LOVE natural hot springs. I’m a connoisseur of hot springs. I dream about them, I’m haunted by them, I love soaking in them. So after a long ski, there’s nothing quite like sitting under a waterfall of hot water. I sat with my eyes closed, a massaging barrage on my back, slowly breathing deep and counting my breaths. It was very meditative. Around my legs, an occasional cold current would flow over them followed by a hot current, swirling around and repeating itself. My lower leg would be 10 degrees cooler than the top of my leg. It was very good for the senses and the soul.

Across the river on the far bank, I watched an American Dipper search for food. The dipper is about 7 inches tall, and has the basic body shape of a wren, though it’s a bit bigger. These birds are very interesting. They get their food by jumping into freezing water, and eating it off the bottom. They bob back up to the surface and dive back down then flying off to the bank to eat. They work their way up the river in this fashion searching for food.

The hard part of any hot spring soak is getting out of it. It’s especially hard when the air temperature is less than 20 degrees and you have to walk on hard packed snow with bare feet to get to your towel and clothes. I moved fast. White lightening. Back at the van, I pulled down the shades and changed, happy to get in clean warm clothes. I drove out of the Yellowstone valley to Livingston where I ordered and devoured a cheese burger at the Montana Chop and Steakhouse. Satisfied, sleepy and sedated from my terrific day, I headed west to Bozeman.

As I was entering Bozeman, coming over the pass in the Bridger Mountains, I saw a snow covered canyon wall that reminded me of Alpine skiing. I got excited, and a small adrenaline burst went through me, as I knew that I’d soon be carving the runs at the Bridger Bowl. Bozeman, Montana has always been a favorite stopping place for me. It seems I always meet friendly people, find cool stores, and enjoy my visit. This time was no different. I rented a room at my favorite motel in town, the Royal 7 budget inn. The rooms are large and very clean, and the price is far below any chain motel. The owners are friendly and I’d rather spend my money on the local guys than the corporate world.

I spent the next two days carving up runs at Bridger Bowl about 30 miles north of town on the north side of the Bridger Mountains. The second day was better, as 3 inches of fresh powder had fallen during the night and I enjoyed making some of the first runs on the new snow. One of life’s little pleasures. The Bridger Mountains are beautiful. A marbleized sky of blue, gray, white, and gold was a fitting ceiling for the rugged mountains that surrounded me. The Bridger valley was lit by morning light and spread out before me reaching to the far distant valley walls of more mountains. It was beautiful, and it was a terrific backdrop for some alpine skiing.

After spending the morning skiing, I spent the afternoon driving through the wide open landscape of western Montana. It was a good day to cruise, I was listening to a book on my Mp3 player, the roads were good and the scenery enjoyable. The long golden prairies of rolling grassland met snow capped mountains far away in the distance. Strong Montana names like the Bitterroot Mountains, the Little Blackfoot River, the Clark Fork River rang out like a song from the landscape. Town names like Discovery, Anaconda, and Butte give evidence of Montana’s mining history. I was immersed in Montana, and I was loving it. 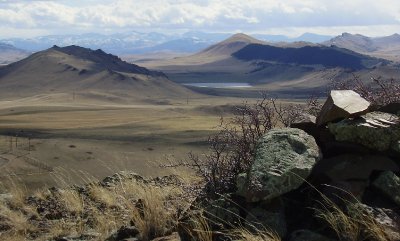 It was getting dark, and I was getting tired. I had another 130 miles to go before I got to Kellogg, Idaho. Kellogg is the area I’ll be calling home for the next 2 months. Rather than push my driving limits, I tucked into a motel for the night. I ordered a pizza to celebrate the coming new year. Tonight, I’ll think back to 2009 and my journey through it. I’ll reread my journal entries, and look at some photos, losing myself in memories. Tomorrow, I’ll take on another year of traveling, starting with 2 months of being a ski bum on Silver Mountain. I also hope to enjoy the mountain views and winter splendor of my cabin home in the village of Wardner, Idaho.

Love It! I'm not used to this blogging, a little like reading a story and a little like eaves dropping. So Happy you will be staying! Wendy

thanks for the camera advice! i guess the bottom line is get out there and practice, and get better over time, eh?
when's your book coming out?