A Day Hike In Denali

When I stepped outside of the dark plywood shack, it started to rain. I didn’t even get my boots on yet. My plan was to hike over to the WAC, and catch a bus into the park to enjoy a little day hike. My time in Denali was running short, and I wanted one more excursion into the park before it was time to go.

The first thing I found out was that my shuttle was free. If you buy two trips into the park, you get one free ride. I thanked the clerk, and went off to the coffee stand to purchase some coffee and pastries while I waited for my ride. I sat on the porch, sipped the surprisingly decent coffee, and ate some prepackaged danishes. Not bad.

The journey into the park was uneventful. We did not see much in terms of wildlife, and the clouds were still hanging low over the mountains. The rain had quit, but it was still cold and gray. Maybe not the best conditions for a hike, but good enough. We finally saw some dahl sheep near Polychrome Mountain. We watched them for a while, as they sat unperturbed on a nearby knoll. Then the bus broke down. The driver couldn’t get it into gear, which meant we were stuck there until the next shuttle came. 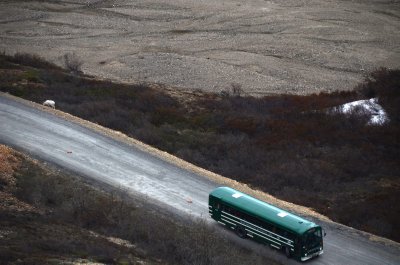 I grabbed my daypack, exited the bus, and started hiking up the first slope directly along side of the bus. Now, I knew I had an audience. Besides the sheep, I was the only interesting thing that was happening on that bus- the weirdo- who left the bus and was actually hiking straight up a mountain. I wanted to get away from the bus as quickly as I could, but I wanted to look good as I did so. I started at a good clip, picking my way expertly up the rocky tundra, through the willow whips, matted lichens and around the scattered brush. The first slope was about two hundred yards long, and every step took me higher than I was before by a significant amount. My legs began to burn. I began to gasp, sucking in air as if I had just been underwater for five minutes. Still, I didn’t want to take a break. I kept going. “Gasp“, step, “GASP“, step, “WHEEZE“, step. My “good clip” had slowed to a very bad clip, but I made it out of sight of the bus without stopping. Success! I celebrated, by collapsing on the tundra, and continuing my gasping. Eventually, I caught my breath, and let my wobbly leg muscles recover. As I lay there, I enjoyed imagining the envy of the other passengers. “That weirdo sure makes a lot of noise when he goes hiking.” “Say Mel, pass me a cookie.” “I wonder when the other bus is coming.” When I recovered, I smugly started up the next section, out of sight, and out of mind. 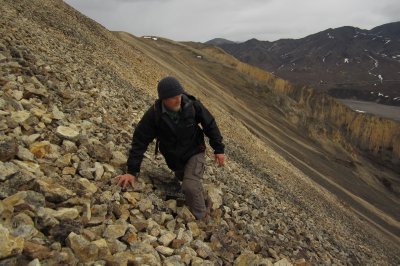 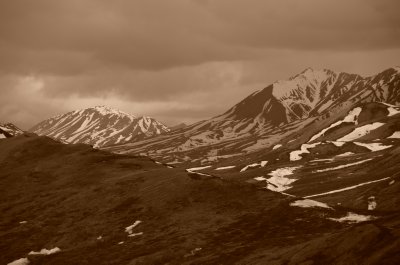 The wind was raw, and I was glad I had a good windbreaker. Not that it breaks wind (which is another term for farting) (which would be silly), but it kept me warmer than my adventure shirt would. As I walked along the ridge, scanning my surroundings for wildlife, I came across this flower. The wildflowers bloom quickly, here in Denali. 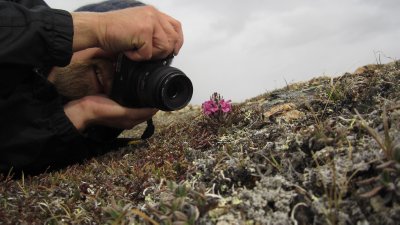 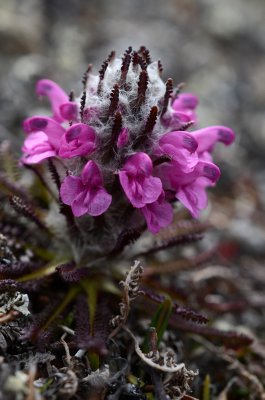 I was among the foothills of Polychrome Mountain that loomed above me separated by several steep ridges and valleys. Since the walking was now quite easy, I decided to cross the canyon and climb up to a high point on the other side. I figured I could get some good views, and perhaps follow that ridge back to the east fork of the Toklat River, which could take me back to the park road. I didn’t know if I could, but I figured it would be a good place to start.

I descended the steep slopes of open tundra, and lichen covered rocks. I picked my way down carefully, as I didn’t want to twist an ankle out here. That would spell trouble. Once again, nobody really knew where I was, I didn’t leave a hiking plan with my nephew, as I didn’t know where I would be hiking. This is bad hiking etiquette, and I do not recommend it. I digress. At the bottom of the canyon, I stepped over a small creek, and began another ascent. This one was much easier to accomplish, as I did not have anyone to “impress.” I took my time, enjoying my thoughts, my exertions, and my day. As I neared the top, I found this feather stuck into the ground. In some cultures, feathers are thought to carry powerful energy. I handled this one carefully before returning it to where I found it. The bird that left it might not like to kindly on my handling of its feathers. 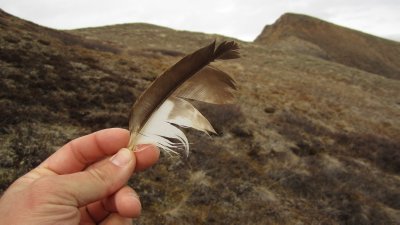 When I gained this second ridge, it was easy enough to follow an old path up to the high point that I wanted to climb. As I neared the pyramid, the trail steepened, and the rocks grew slippery. However, it didn’t slow me down, and it wasn’t long before I was high above the surrounding countryside. Do I have to mention the view was incredible? It was. 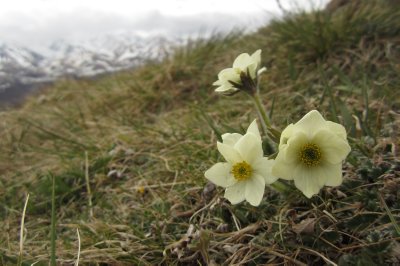 Inspiration struck, and I decided to do my version of a Denali Mountain Dance. I didn’t have any specific goal for the dance, as in, “make it rain” or “make it stop snowing” or “I’d like a pizza dropped from the sky,” but my spirit carried me on for the sake of the dance. I set my camera on a time lapse setting and got down with my bad self. In truth, it was all improvised, there are no steps, and you simply dance for the mountain. What fun. It was so much fun in fact, that I did two Denali Mountain Dances. That’s good stuff! 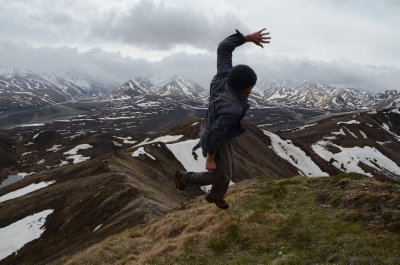 I happily sat down out of the wind, and pulled out my lunch. It was simple food for a simple man, and I enjoyed it while I gazed out over the earthy purple, tan and gray shades of earth that make up the countryside, stretching from Polychrome Mountain as far as I could see into the Wyoming Hills. 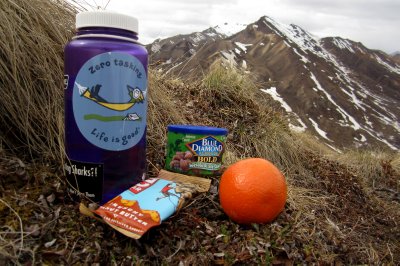 It was time to turn around, and make my way back to the road. I just didn’t know how I wanted to get there. I could have went east to the river and follow that back south to the road (the hard way), or I could follow the ridge I was on west to the road (the easy way). Looking at my options, I chose the hard way, after all, I am me. At the end of the ridge, I realized the hard way was going to be a lot harder than I first thought, and after a little deliberating, I decided to cancel that approach and instead hike back down the canyon and back up the other side, summiting further south from where I started. At the bottom of the canyon, I stopped to filter some water into my water bottle. I figured it is always better to fill up when you can, rather than wish you did when you cannot. From there, I started back up the canyon wall yet again. At the halfway point, I took a break. I was getting tired. This was my third ascent of the day, and the foothills and mountains of Denali are not easy. They are steep! 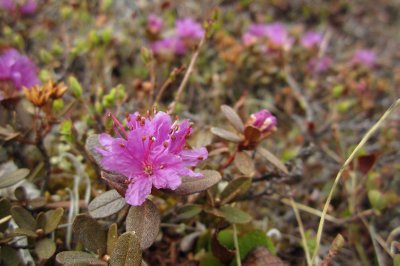 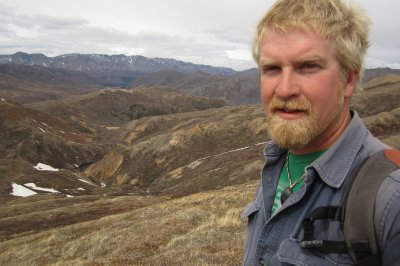 When I reached the top of the ridge, I had to cross several patches of knee-deep snow. The sun still hadn’t gotten to these areas yet, but I didn’t mind. I could see a small section of the road below me, and as I descended, I realized it would make a great picture. I found an appealing perch on the tundra and decided to wait to see what happened. What happened was that the clouds that were once so thickly covered the higher peaks of the Alaska Range, were breaking up. The sun came out, and blue sky began to appear in growing patches. My Denali Mountain Dance worked! 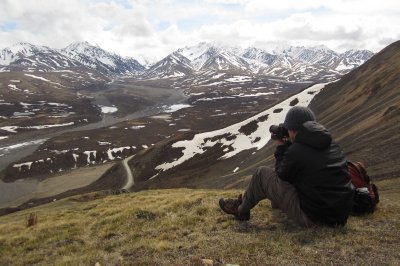 The following images of are among my favorites that I have from Denali. The park road was a perfect leading line into the awe-inspiring mountain landscapes. The pack of dahl sheep I had seen earlier in the day reappeared, adding yet one more element to theses photos. They are small, yet you can pick them out in the bottom of some of these photos. 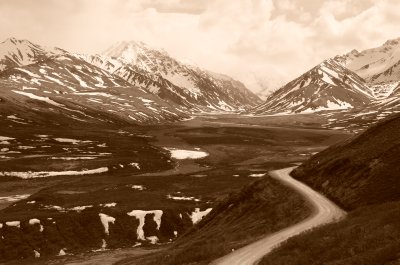 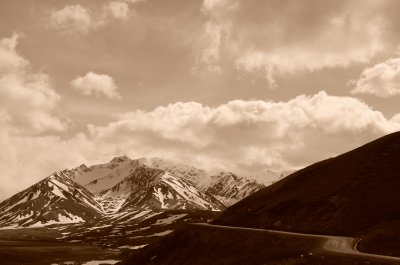 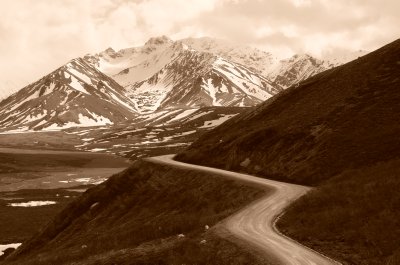 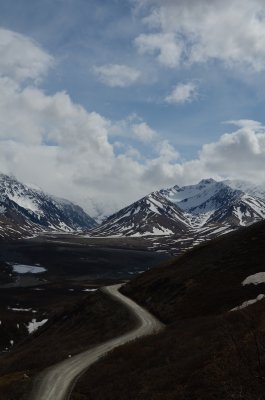 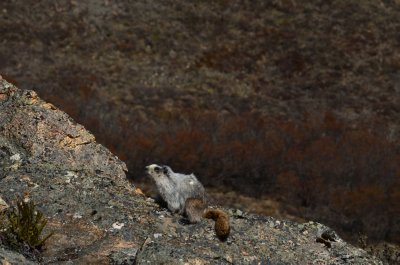 On my way down to the road, I saw my first marmot, which looked like a giant rock squirrel. It perched on a rock not more than 25 feet away from me, happy to be out in the sunshine again. Down on the road, it took well over an hour for a shuttle bus to pick me up. I really didn’t mind, as the glacial river valley that I was walking along was absolutely gorgeous. This was a fine day to walk in the park! Finally, a bus rounded the corner, and I flagged it down. It was time to go. However, I was well satisfied with my efforts for the day, and this day was seized. 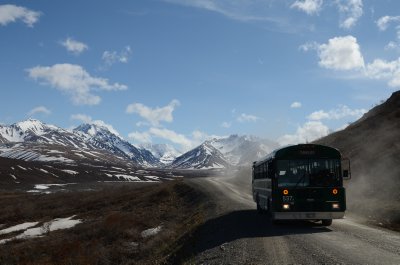 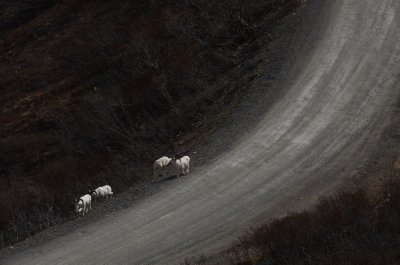 As a final parting gift, “the high one” came out of the clouds, and I was able to see Denali one more time. 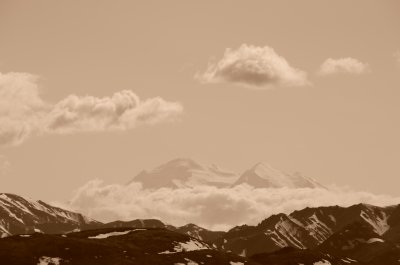 I capped off my day, by hiking back to the shack. There I enjoyed a “luxurious” lukewarm shower. I ate a gigantic dinner, with some good beer, and hung out with the hill people until I was able to convince one of my new friends to come over to glitter gulch for some fun. What happened was another night of Denali carousing in its most beautiful forms. We drank, we laughed, and we giggled at everyone. There was karaoke being sung (which I did not partake in, thankfully). There was some dancing, many friends hanging out and having fun. Somewhere near the end, there were a few nips of tequila. I stumbled off to bed at 3:30 a.m. (it was still light out). I smiled to myself about how good this day had been.

I am still smiling about it. Denali is awesome.

What is glitter gulch?

That's the name of the strip of shops and restaurants located just outside of the park.. a tourist trap.. It might also be the name of the canyon/gulch where said businesses make there home.. It might have been named by gold miners back in the day.