The Denali Experience, Into the Wilderness, Igloo Mountain, Mountain Grandeur, The Front Country 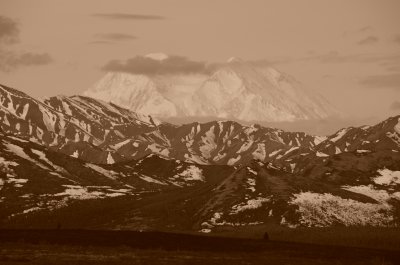 Denali is a wild place. In the past week, I have spent time in Denali’s front country, the area of the park near the entrance, and two days in the wilderness that is Denali’s backcountry. While not in the park, I have been living in a hillside community of Denali workers. They are here to service the multitude of tourists that visit this park each summer. I am in a unique position, because though essentially I am a tourist, I am living with the summer community of amazing people that work in the Denali region. 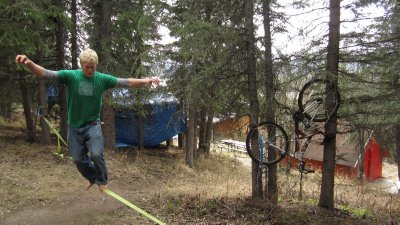 My position has allowed me to see both sides of the Denali experience. I’m free to explore the park as I will, unhampered by the need to work everyday. Because my nephew works here, I have been able to stay with him in the plywood shack that he calls home. The people that work here are a motley collection of folks from all around the world that are here to take in Denali, and make some money. When they aren’t working, they take advantage of their free time by hiking, white water rafting, going on a tour, and partying hard. Your liver gets a workout when you live up here in Denali.

Denali National Park is unique among our national parks because of its designation as a wilderness area. There are no trails in the backcountry. There are no easy paths to follow to your next campsite. If you choose to leave the comfort of the shuttle buses that take visitors into the park, you are on your own, and you had better know what you are doing. Denali’s backcountry is unforgiving. It is a hard land that is difficult to navigate, and people have died here.

That being said, the landscape is absolutely amazing. I am in awe, and I cannot believe that I’m finally here, ready to explore this amazing jewel of our national parks.

To gain access to the backcountry, I had to watch an informational video at the WAC (Wilderness Access Center) and fill out a free backcountry permit. Denali is broken into numbered sections, and in order to keep the park wild, the park service only allows a certain number of people into each section. As this was my first visit to the park, I didn’t really know where I wanted to go. After looking through the descriptions of the sections, I chose one to my liking. I exchanged forms with the clerk, and I was on my way. I purchased a ticket on shuttle bus into the park for the next morning, and I went back to the shack to pack for the adventure.

The next morning, I walked back to the WAC, where I would meet my shuttle into the park. I was tired, I had stayed up too late, hanging out with the hill people that I call neighbors. I yawned, sipped some coffee, and I checked my gear. I studied the topo map of the land near Igloo Mountain. I didn’t really know what to expect, but I was on my way. 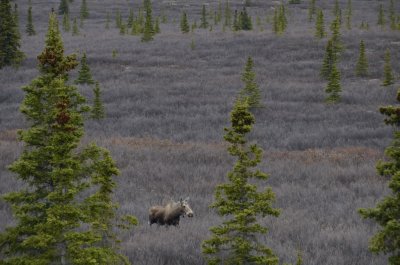 The bus ride was somewhat lame. Granted, we saw some herds of caribou, a moose, a lynx (the first I had ever seen), among other animals, but the bus driver was a nitpicker for petty rules, “You HAVE to wear your seatbelt.” and my fellow passengers were pretentious, full of stupid questions, and mildly rude. I hate to be negative about my fellow men, but these were a bad lot. I was happy enough to ignore them and focus on the amazing scenery and wild animals all around me.

I saw long sweeping views of the snow capped mountains of the Alaska Range. The Alaska Range is home of Denali, the highest mountain in North America. The land is a mixture of taiga, spruce forest, swampy wetlands, wide braided and rocky rivers, arctic tundra, grassy highlands, foothills, and snow capped mountains. My words and photos cannot really do this place justice. Denali provides a vivid sensory overload that left me speechless.

The bus stopped and let me off at Igloo Creek. I was happy to be free of the bus, but as it pulled away, a twang of uncertainty rippled through me. I was about to walk into the Denali wild, and not one soul on this earth knew where I was, or knew where I was going. To tell the truth, I didn’t really know either. 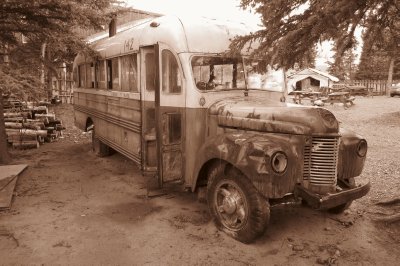 Igloo Mountain towered high above me, and I knew I had to decide which way I wanted to walk around it. I decided to scramble up to a rocky overlook and take stock of the landscape. On paper, the mountain looked approachable from any direction, but in reality, a lot of it looked impassable, and I did not want to have to turn around. From the high point, I had my first breath taking view of the Cathedral Mountains, and of the Teklanika River Valley. The Teklanika is the same river that stymied Alexander Supertramp’s escape back in the early nineties. I looked over the landscape, decided to try to walk around the mountain to the east, and backtracked back down into the spruce forest.

Having lived and worked in northern Minnesota for many years, I was quite comfortable walking through a boggy spruce forest. It was still a lot of hard work, as my heavy pack seemed to catch on the stiff branches of the brush. I worked my way around the mountain, eventually finding and following a moose trail. Moose, like elk, know where to walk. It made my hike a lot easier. 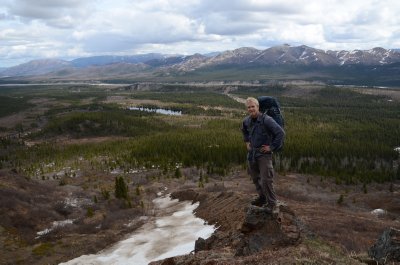 As it turned out, I had chosen wisely, a long grassy taiga covered ridge led up a long ridge onto Igloo Mountain. Since I was only going for one night, I wanted to find a place that wasn’t too far into the wilderness. This ridge looked ideal. I wanted a good view, and I wanted a good campsite. I began to climb up the spongy taiga and loose gravel that took me higher and higher up onto the mountain. 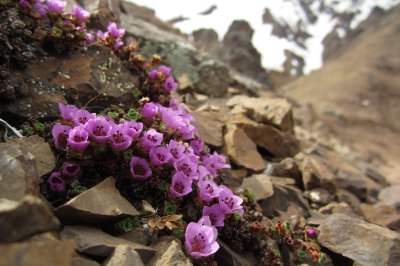 Eventually I made my way to the top of the ridge, and found a few promising campsites. I set down my pack, and grabbed my camera. The high ridge was dotted with pockets of beautiful wildflowers, and the view of the distant mountains was incredible. I did not expect wildflowers to be out this early in the mountain season, but I wasn’t complaining. I found three varieties, and I had fun putting them into focus. 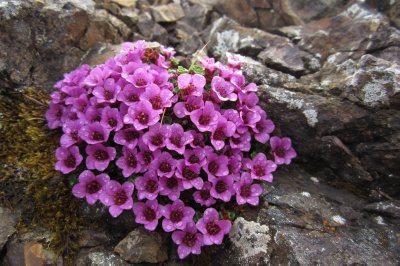 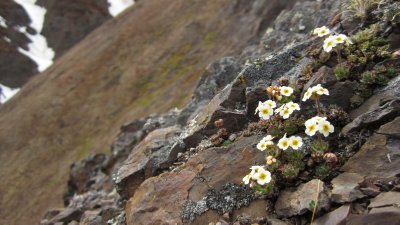 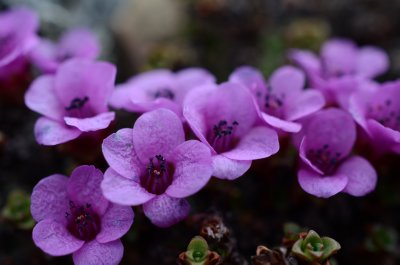 After eating lunch, I put on my rain gear and laid down on the dry spongy taiga. I was very comfortable, and I grew sleepy. The moss was perfect, and it wasn’t long before I passed out. I awoke to the gentle patter of rain on my rain gear. I sat up, rubbed the sleep out of my eyes and decided to have an early dinner. I walked to where I was keeping my food in the black bear proof container some distance from my campsite. I made a sandwich of peanut butter and honey, crunched some almonds, and ate the last of my beef jerky with a couple nips of red wine. I ate this wonderful meal, sitting on the bear barrel, as another rain squall passed over me. I was glad I had good rain gear. 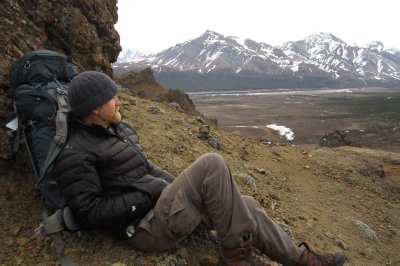 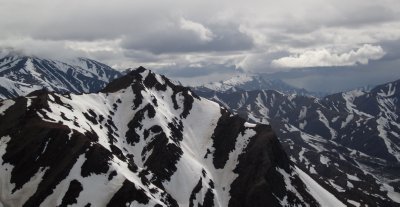 After dinner, I started hiking up a ridge that looked like it would take me to the top of the mountain. I took only my small camera that fit easily into my pocket. The ridge was easy to follow, though it was steep, made up of loose scree, and wet from the rain. I was feeling good, energetic and moving fast. Then I found myself atop a twenty-foot high rock tower. It was made of very sharp rock, loose, and untrustworthy. I decided to climb down it instead of backtracking and finding a way around it. It wasn’t the smartest thing I have ever done, but using basic climbing techniques, and double checking my holds on the wet rock, I made my way down safely. 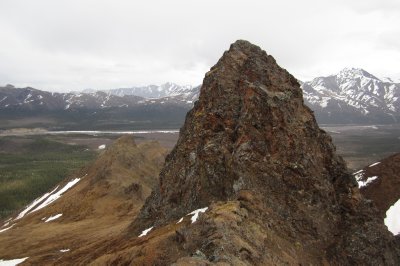 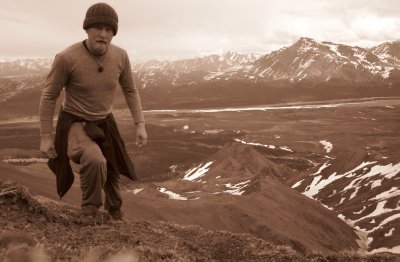 From there, it was an easy trek. I followed the ridge higher and higher onto the shoulder of the mountain. Then I followed a Dahl sheep track across a steep open talus slope to the top of the mountain ridge. The rain had quit, and I had stripped down to my hiking gear. The thick clouds weakened and broke open in spots allowing the sun to shine through. The white light highlighted the mountains, and low clouds near the breaks. It was some of the most breathtaking mountain grandeur I had ever seen. 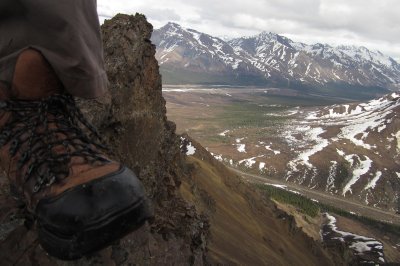 To get to the very highest point, I had to walk a knife-edge of sharp rock. If I slipped, I would have fallen thirty feet on either side, before sliding down the mountain. This was a badass hike if I had ever seen one. I climbed the last twenty feet up a slippery rock face covered in wet grass, loose rock and mud. 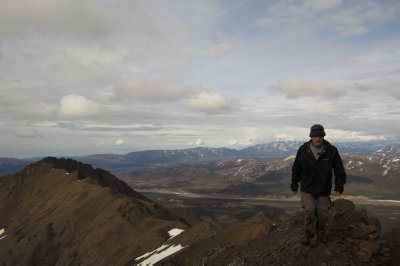 I summited. I sat down, and I soaked up the mountain views all around me. “My God,” I said aloud, then, waving my arms around me in every direction, “This IS my God.” 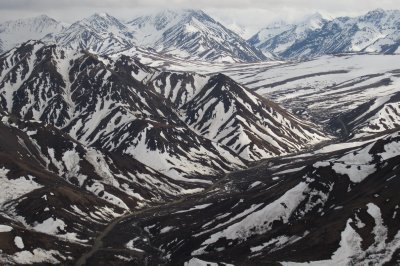 I looked down on the pale ribbon of the Denali Park Road that wound through the zebra striped mountains of brown and white. It looked tiny in comparison to the immense landscape around it.

I was in awe. I keep saying this, but I was. The following poem came to mind, written by Chia Tao

Searching For the Hermit In Vain

I love the last line. And that is exactly where I was. 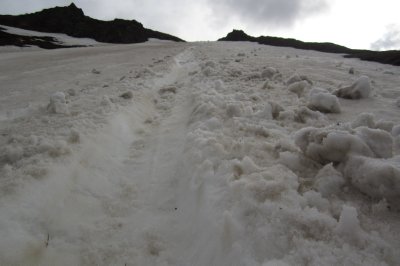 On my way down, I retraced my steps back down to the ridge. Instead of following it, I decided to put on my rain gear and try sliding down a snow slope that would take me down to my campsite. After one gentle push with my arms, I began to slide easily on the snow. Then, I began to slip faster and faster, more or less rocketing down this slope. I giggled, whooped and dug in my heels trying to slow down. I laughed all the way to bottom, where my weight caused me to dig into the soft wet snow near the edge of where snow met the grass. 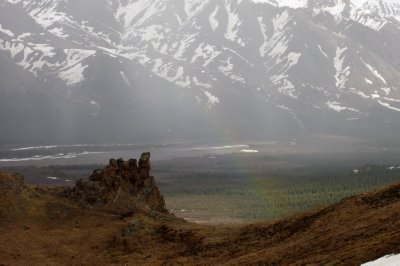 I thought about climbing up again for another ride, but instead walked back down to my camp. Another rainbow appeared, the third of the day. That’s when I named the ridge I was camped on, “Rainbow Ridge.”
I sat in the rain and enjoyed the rainbow. The clouds moved in, and it rained harder. I laughed. I drank the rest of my box of wine, and went to bed.

The Denali front country has been very good to me as well. From visiting sled dogs, to shooting pool with my nephew and talking philosophy under an old railroad bridge, and long hikes up into the mountains. Denali has been amazing. These are just a few scenes from my first week. 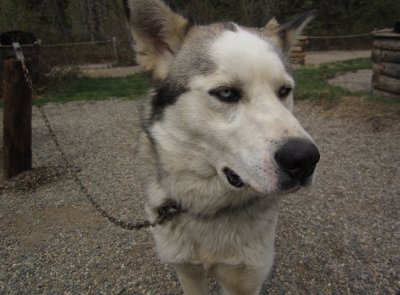 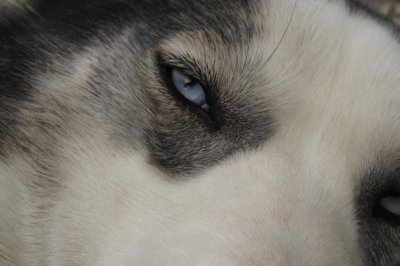 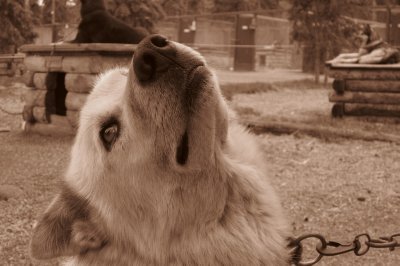 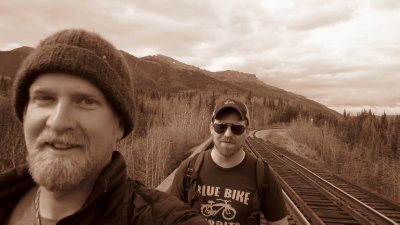 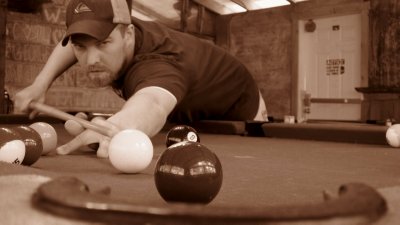 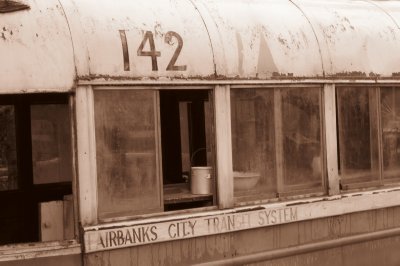 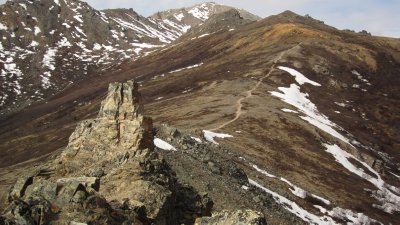 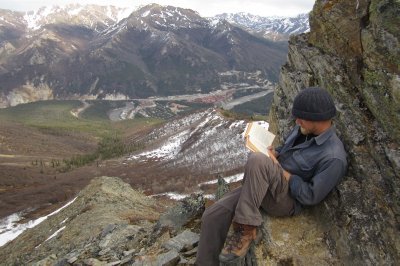 Denali's Backcountry - wow - I did the tourist thing there, whitewater rafting - I cant imagine just setting OFF trail...alone...you are so brave! :_z

Hmm.. It's a calculated risk.. If one is prepared for the elements and the unexpected, you should have no problem.. Denali is definitely one of the most amazing places I've ever hiked.