Repacking at REI, The Generosity of Alaskans, and a Great Day of Hitchhiking.

It had been over a decade since I had attempted to hitchhike. Back in college, a friend and I decided to hold a hitchhiking race to a distant town and back to our starting points, a distance of about seventy miles. The winner earned a free lunch. I don’t remember much about those happy times, but it was a lot of fun. I know I lost that race, but only by minutes.

On the advice of my nephew, I decided to attempt to hitchhike from Anchorage, Alaska up to Denali National Park, a distance of about 240 miles. As I packed my bags as compactly as possible the night before, I thought about the day ahead of me. I would fly from Sitka on the 6 am flight up to Anchorage. After a brief stop at REI, I would catch a cab out of town and begin hitchhiking north. It sounded reasonable.

My alarm went off at 4 am. My body revolted, but my mind carried me through, getting me into my clothes and down the stairs in time to catch my shuttle to the airport. The flights were smooth, and I landed in Anchorage at about 9am. As I attempted to put on my enormously heavy expedition backpack, the shoulder strap snapped and my pack fell to the floor with a resounding “BOOM!”

It was a good thing I had plans of going to REI. I took a cab there, told the cashier my predicament, and went in search of another backpack. On such short notice, I didn’t have time to do much research, but I found one to my liking. After making the purchase, I asked if I could repack everything in their back hallway. They were very helpful, and had no problem with me piling my crap all over their floor. 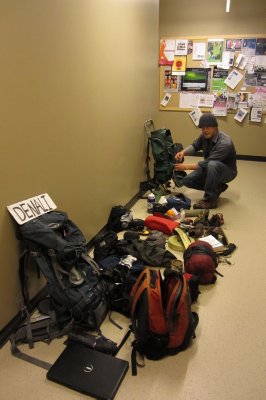 After that, I called another cab, and took a ride outside of Eagle River. The cab driver let me out, and I walked across and interchange to the on ramp of the freeway. I set down my bags, pulled out my “DENALI” sign that I had made, and smiled. I was putting myself out in the stream of the universe, putting all of my trust into the hands of complete strangers. It was going to be a good day.

As I stood there, I decided to give my brother a call. I wanted to share my adventure, and he is a good guy to talk with. As I described to him where I was, a guy in a pickup truck pulled along side. I said goodbye to my brother, and hung up. The guy in the truck said, “I’m going up to Peter’s Creek, if you want a ride.” Success! I had only waited about two minutes and I already had my first ride. I heaved my weighty pack into his truck bed and hopped into the front seat. I was on my way.

He was a nice guy, who talked softly and traveled with a dog named “Big Boy.” He let me out in Peter’s Creek, and I set my bags down on the next on ramp and called my brother back. I chatted with him for all of four minutes this time, before another guy pulled over, turned off his car, hopped out, and began moving stuff from the front seat to the back. I thanked him for stopping, and he offered me a piece of fruit for the ride. We talked of Denali, the cool spring weather and what roads I should take.

The country I was hitching through was gorgeous. The snow capped mountains of the Alaskan Range spread out in front of us, a panoramic of mountain grandeur. Due to some clouds, I could not see Denali itself, the highest peak in North America, but its smaller brothers were quite magnificent.

Jerry took me to Wasilla. He let me out in the center of town and I knew it was probably unlikely that I would get a ride in town. I started walking along a frontage road, cursing myself for bringing all this heavy gear in my pack. I passed Lake Wasilla, where a family was having a picnic, some long distance bikers were having lunch in the sunshine, and two kids were throwing a baseball. They were all enjoying the spring day, as I was.

As I walked along, I passed in front of an entrance to a shopping center. I heard a man call out behind me, “Hey.” I turned and he pointed to the backseat of his SUV, I walked back to him and he told me they could take me as far as Big Lake. Ha! What luck! I hopped in, introduced myself, and learned that my new friends were Sid and Terry. They turned out to be some of the sweetest people I have met. They were very genuine, very friendly, and a very cute having been married for well over forty years. “After forty years, you get to know your wife pretty good. The problem is, she knows me better.” and we all laughed at his “misfortune.” As we drove along, Sid suddenly declared with certainty. “I WANT AN ICE CREAM CONE.“ Terry, rolled her eyes and said, “I’ll stop for an ice cream, if we see a shop along the way. “ Sid replied, “There’s one right there.“ To which Terry responded, “That is not, that’s a restaurant. They don’t even sell ice cream.“ So it went, the ride was pleasant and the miles began to add up. They took me a lot further than Big Lake. They took a liking to me, and decided to drive up to the Talkeetna Junction, a long way out of their way. At the junction, they insisted on buying me lunch, to which I couldn’t refuse. Honestly, the friendly generosity of Alaskans is amazing. 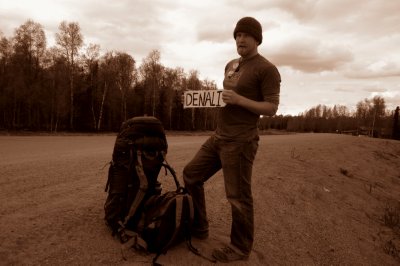 At Talkeetna, I set up on the north side of the gas station on the side of the highway. The country had a more remote feeling to it. A kind of desolation, that there was not much out there between these tiny communities. It took awhile to get a ride here. While I waited, I chatted with my brother, set up a few pictures, and thought about the concept of hitchhiking.

I don’t begrudge anyone for not giving me a ride. I have passed many hitchhikers in my day, which I didn’t stop to help. I know this is bad karma, but the nature of hitchhiking is trust, and you have to judge a book by its cover. I was dressed in jeans and a tee shirt. I looked presentable, and smiled at potential rides. I was really having fun out there. I was hitching into the unknown on a beautiful spring day through a wonderful countryside full of tall spruce trees, white mountains and clear gravel rivers. I felt carefree, I felt happy, and I was having a great day.

Many cars passed me by. I didn’t mind, I figured they just didn’t have room for another guy with a huge pack, or had their own reasons for not picking me up. Then Sarah pulled in for gas, and came out saying she could get me up to Trapper’s Creek, some 14 miles up the road. I hopped in, and off we went.

Sarah was one of those badass Alaskan women. There is something about Alaskan women that other women don’t have. It is as if they carry around with them a small invisible chip on there shoulder that tells you, “Damn right I’m Alaskan, and proud of it.” It’s not a confrontational chip, it’s just an attitude that lets you know that they can do anything they want. I think it’s kind of hot. I liked her a lot. 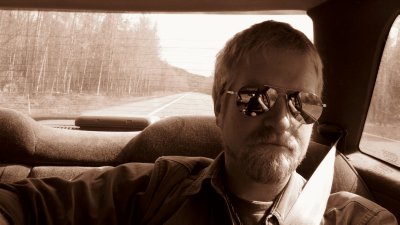 She brought me to Trapper’s Creek, another small blip of a community, a centralized meeting place for locals, more or less. Once again, I had to wait awhile, before I caught my next (and best) ride. A pack of cars whipped past and I had failed to catch a ride. Then, after awhile, one of those cars came back, and the driver yelled at me, “We’re going to help you.” They pulled into the gas station. I walked over to them, and they introduced themselves as Julie and Brett. Julie was another bad ass Alaskan, and Brett was just a cool kid. Both of them were young and friendly, and kindred spirits. We talked a lot, and Julie drove up the highway as if she was being chased by demons. The pedal was to the metal. She told me of how safe a driver she was. Then she pulled out to pass an RV into oncoming traffic. Both of the other drivers pulled over onto the shoulder allowing us to make the pass. I kept saying with more urgency, “There’s a car. I see headlights. Yep, that’s a CAR!“ That was scary. Ah well, I survived. 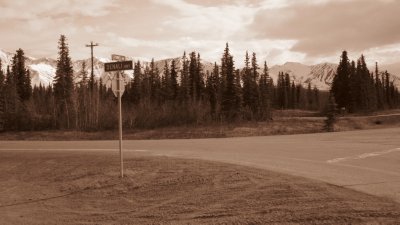 I caught a ride with them almost all the way to Denali. In fact, I had only thirty more miles to go, and I was confident I would make it in one day. The cars that passed were fewer and far between, and I didn’t have any luck for quite awhile. I kept thinking to myself, that I didn't want to be anywhere else than where I was. Happily sitting on side of the road in the middle of the Alaskan wilderness, hitchhiking my way to Denali. I lead a charmed life. My friends Julie and Brett rolled up again and told me, “Hey man, it’s your lucky day! We’re going up to Denali, to catch a bite to eat. Hop in!” I did as I was told, and hopped in riding the rest of the way to Denali in style. 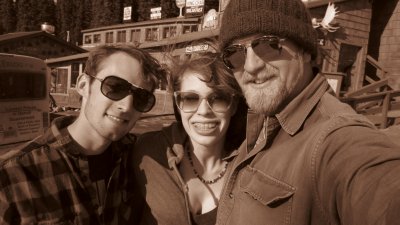 All told, it took me about six hours to the two hundred and forty miles. They let me out at the Salmon Bake Restaurant, where I was going to meet my nephew. It turns out he was parked right out front of the Bake, sitting in his shuttle bus that he drives. I laughed and hauled my gear onto the bus. This plan couldn’t have worked out any better if I tried.

I'll be in Denali for the forseeable future. Right now, I'm living in a shack that has no running water, and no electricity. It's cold at night, the mosquitos are voracious, and the views are pleasant. There is an amazing community of groovy people that do this every summer, working for the park, or the community of restaurants and lodges that make up the Denali support system. I like what I see here, and I love this community of chilled out adults. In fact that is what summer in Denali is: Summer camp for adults. There's more to come, thanks for sharing in my adventures.

The mean green external frame finally called it quits? Tragic indeed. Hopefully there was a ceremony before it was laid to rest in the dumpster.

Actually I think it was fixable.. the guy i gave it to, seemed pretty happy to have it, so it will live on.. I just didn't have the time to fix it right, y'know?

Thats a horrible picture of me Thomas! Oh well, I'm glad you are enjoying your stay in Denali, Alaska. Dry cabins suck, but just like hitch hiking it certainly humbles you. Keep in touch!

Sorry Juli! We look like what we look like, it's not like my ugly mug is going to be winning me any awards any time soon! Thanks for the rides, and i will be in touch!