I had been watching the progress of the blizzard that was pummeling the upper Midwest for days. I had planned to leave the day after Christmas, but would play it safe if I needed to. I woke up early and checked the radar, and current conditions on the television. It looked like I had a decent weather window and so I started my journey to Idaho.

The first day was a long drive day. I drove from Michigan’s Keweenaw peninsula to Fargo, North Dakota. The roads started out decent, clear and dry. Then they slowly deteriorated throughout the day to snow covered, and finally a thin covering of the dreaded black ice. The highlight of the day was driving through western Minnesota. There was a decent covering of powdered sugar snow that layered everything. The snow seemed to hush my passage. It was like I was driving through an art museum full of tree sculptures inside a snow globe. It was very peaceful. I arrived in Fargo in the evening, tired and exhausted from concentrating hard on safe driving. The roads in Fargo weren’t plowed and were very slippery. It was clear the blizzard had hit hard here, with 4 foot snow banks, and heavy drifts. I gratefully found a nice motel, too tired to take on another state.

The next day I headed west on I-90. Freeways though boring, are your best bet in bad weather. The plow drivers generally take care of the major arteries of traffic first, before the secondary roads. The day was shaping up nicely, and it wasn’t long before the sun came out, just east of Bismarck, ND. Bismarck marks the change of landscape from eastern prairie to the storied western landscape of America. Crossing the Missouri River, I noticed the land taking on the western feel. Rolling hills dominated the eye, leading off to the horizon. Buttes began jutting out of the hills, and there were less trees than the east. The road began to rise and fall, but still straight as an arrow.

I drove past Dickinson, remembering past trips where my van broke down there. Later, I pulled off the highway intending to visit Theodore Roosevelt National Park. I stopped in at the Visitor’s center to find out the condition of the park road. I woke up the lonely ranger, and learned roads were fine. Happily, I drove north into the park. The rugged landscape was beautifully lit with low angled, winter sun. The warm light formed long blue shadows on the fresh snow. It was gorgeous. In the distance, I spotted an Elk crossing the road, and running off into the meadow. I like how they run, noses in the air, like a stuck up French waiter. I stopped and turned off the van and used my binoculars to watch a herd of about 20 Elk. They eyed me with suspicion, who had the nerve to interrupt the winter solitude? It wasn’t long before they got bored with me and moved down through the woods to the river. Elk are magnificent creatures. 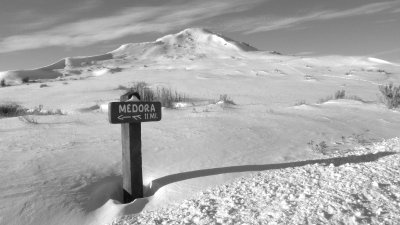 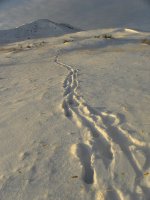 I drove deeper into the park, winding up and down and around the high, eroded sand formations. The badlands covered in snow were a new experience for me. I’d seen them in every other season except winter. Finally, I reached the end of the road and the turn around point. I was at one end of the scenic loop, and it was the best place to stop. I got out, and took a few pictures of the scenery, then decided to go Nordic skiing on the closed road. Spontaneous decisions can yield excellent rewards, and I was well rewarded. I skied through the soft powder, digging the landscape around me. The wind had built up impressive drifts, and carved intricate curves in the powder. The sun was angling lower giving the scenery very warm hues. There was no wind to speak of, and I was happily striding on my skis. It was good to get some exercise after being cooped up at the steering wheel for so long.

I had skied roughly 5 miles. I was satisfied with my efforts, and the sun was just setting over the horizon. I worked my way back south through the park. I filled up my gas tank in Medora, and headed west once again into the beautiful and proverbial sunset. I drove west into Montana, one of my favorite states. The cold blue landscape met the cold clear air and formed an intense afterglow of the sunset. A good way to enter a state. I drove another 100 miles or so to Miles City, where I once again stopped for the night.

Ah, Montana. I love driving through eastern Montana in the morning. The endless, undulating highway; a river of asphalt through the wheat fields and badlands which meets the wide open sky, giving Montana it’s moniker as the Big Sky State. You can see forever in every direction. The distances of the west are vast. It takes a long time to get anywhere, and it gives you a lot of time to think. My mind wanders, I get lost in the antique store of my memory; aimlessly picking up a long forgotten item, dusting it off and contemplating its meaning. Why am I storing up such useless knowledge? For instance, I was 64 miles into my drive, and my mind produced the name Chris Fuamatu Ma afala. He was an unremarkable running back for the Pittsburg Steelers (my favorite football team) some years ago. I kept saying his name out loud. Like a mantra. Granted, he has a strange name, but wouldn’t this knowledge be better replaced with, oh, I don’t know, Basic First Aid or something? Alas, I can’t help what my mind stores up, and it does give me something to ponder as I drive the relentless miles of the interstate.

For years, I drove by Pompeii’s Pillar National Historic Monument. I always kept saying that “I’d stop there next time.” Well today was “next time.” I pulled off the interstate, and drove over to the entrance and parked. The park was closed, but I was happy to walk the mile to the pillar. The sandstone pillar’s claim to fame was that William Clark (of Lewis and Clark expeditions) etched his name on the rock in 1806. I had the park to myself as I walked through the 3” powder. My steps gave me a rhythm, “Squeak, Crunch. Squeak, Crunch.” You know it’s cold when the snow squeaks underfoot. The sun was out, I had an azure blue sky above me and I was hiking towards a piece of American History, life was good. 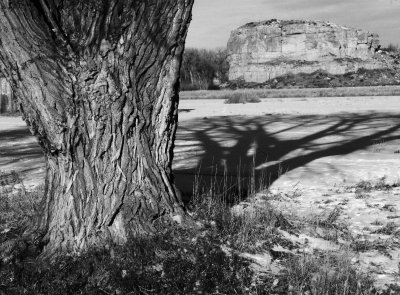 I climbed the heavily constructed wooden steps up to the famous etching. Signs were posted that it was unlawful to leave the boardwalk, that I was being filmed and an alarm would sound if I left the boardwalk. Considering I was alone and miles from civilization I didn’t feel too threatened, but it kind of bummed me out that the place was sanitized and protected against having any fun. Like a solitary cow in the branding shute, I made may way through the maze of ramps and stairs to the famous inscription. It was in flat light, but I could still make it out. I didn’t feel any sense of awe that I was standing where Clark had stood, but it did give me some perspective. I tried to imagine the place without all the civilization and protections. I tuned out the distant train horn and the hum of the freeway. I looked towards the Yellowstone river and its copse of Cottonwood trees that bordered it. I realized that this place had been a campground and stopping place for a long time before Lewis and Clark ever stopped there. It was perfect. It had water, shade, and protection from the elements. Not only that, climbing the butte was easy and gave you a view for miles in every direction. I liked it. 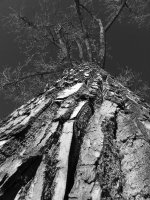 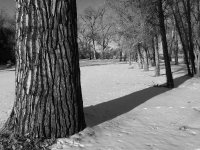 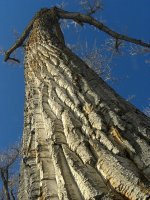 I walked down the ramps and stairs back to level ground. I headed towards the river through the grove of Cottonwoods and became enamored with these fine trees. I like Cottonwoods. There a big deciduous tree, growing near rivers and lakes which gives them plenty of water to grow big and strong. The bark is rough and deeply furrowed. It has character. like an old man’s face. They grow to 40’ to 80’ high and provide excellent shade with their heavily foliaged branches. 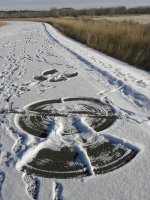 I walked back towards the van and began seeing snow angels all over the place. “God must have been punting angels left and right” popped into my mind. Calvin and Hobbes is always good. I drank some cider and hopped back onto the freeway heading west to Livingston. I enjoyed seeing the Crazy mountains just west of Big Timber. In Livingston, I turned south on Hwy 89 and entered the Yellowstone valley that leads to Gardiner and Yellowstone National Park. 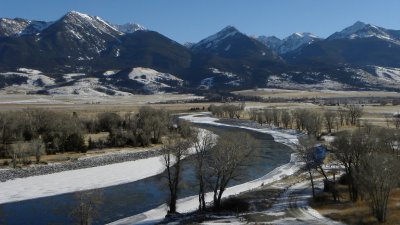 I love driving through the Yellowstone valley. It’s one of the quintessential Montana landscapes. The eastern valley wall consists of the jagged Absaroka Range. The western wall is a collection of foothills of the Gallatin National Forest. The Yellowstone river snakes it’s way north from the park, winding through the ranches, and grassland of the valley floor. The ranches add to the landscape in their own way. It’s nice seeing horses grazing in the meadows far off in the distance. Farther south, I entered Yankee Jim Canyon, and the road winded it’s way along side of the now rushing river through the rocky canyon. The geology of the rocks is flaky and layered, most of it on an angle from some prehistoric arrangement. Finally, I hit my destination, and that was Gardiner, MT. 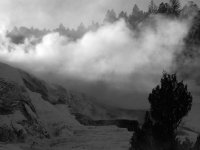 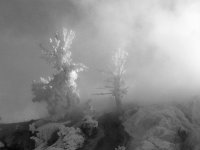 Driving south through town, I saw 3 mule deer slowly walking towards me down the middle of the road. They weren’t spooked at all, seemingly indifferent to traffic. I stopped and watched them slowly amble over to the sidewalk. I figured they must’ve wanted to do some window shopping and it was nice to see them using the sidewalks instead of the road. I purchased a room for the night, then headed south into Yellowstone National Park. I wanted to find out the trail conditions for cross country skiing. I also wanted to take in the scenery and hopefully see some Big Horn Sheep or some Buffalo. I saw that the hot spring parking lot was full, so I decided that I was going to go for a sunrise soak tomorrow and hopefully avoid the crowds. I pulled up at the Mammoth Hot Spring Terraces. The steam rising was billowing and brightly lit from the setting sun. I grabbed my camera and went out for a nice hike around the terraces. After my hike, I stopped by the visitor’s center for some trail maps and advice then coasted my way back down to Gardiner. I took a hot shower, heated up a pasty (a Cornish meat pie) for dinner. Thinking back on the first 3 days of travel, I’m happy with my progress and the beautiful American landscape.