There are days when the mountain blooms into a magnificent masterpiece of winter landscape. After a week straight of strong winds and heavy cloud cover (which produced gorgeous blankets of light powder), I woke up to a beautiful bluebird day. The air was crisp and clean, and the snow crunched underfoot as I walked down the street to the gondola. The sky was a deep, rocky mountain azure that made the brilliance of the new snow that much more intense. I was glad I remembered my sunglasses. 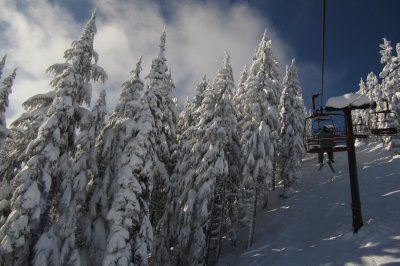 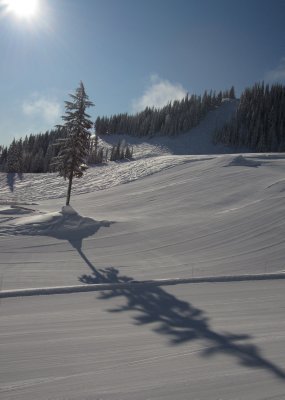 As I rode up the chairlift, I realized that the day was not about skiing; it was about appreciating the magnificent mountain splendor. I made it my mission to admire the mountain from as many different perspectives as I could. After unloading and coasting to a stop at the top of the run, I stopped and marveled at the mountain scene that stretched before me. It inspired awe. I smiled broadly. 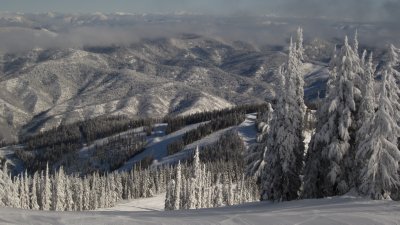 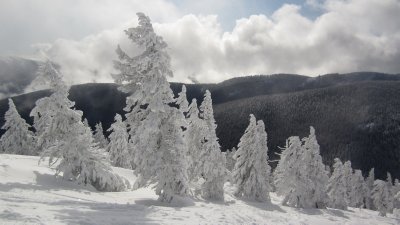 I made a few runs, skiing slowly while focusing on the landscapes. After a week of pummeling winter weather, the trees looked like dazzling white statues against the distant mountain slopes and deep blue sky. Throughout the morning, the lighting continued to change. Not only because the sun continued rise, but small patches of streaming clouds continued to pass over the mountain at various times. These clouds moved at different elevations, sometimes hovering just above the mountain, and other times covering several acres of the mountain slopes. The shifting light patterns were part of the magic. 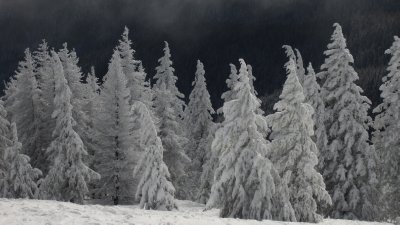 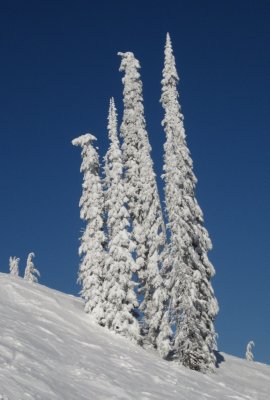 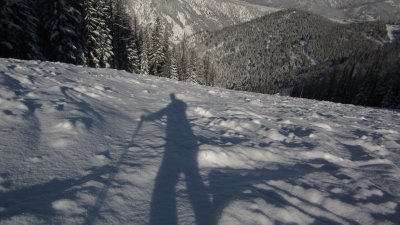 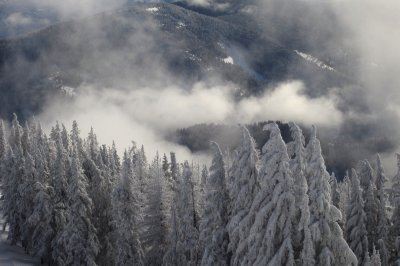 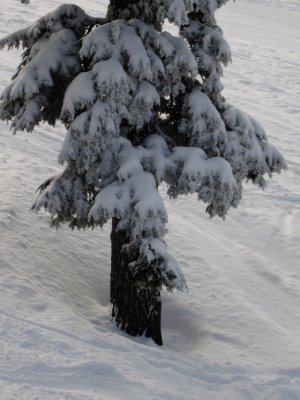 Zen moment # 3,268,103:
Once again, I hiked to the top of Wardner peak. I sat down in the snow bank in my favorite patch of pines to catch my breath. I was digging the trees, and eating my lunch, when, as usual, I saw a scene to take a photo of… I stood up in knee-deep snow and set up the following shot. I hear a soft rustle above me, but I kept my focus and WHAM! A huge pile of snow landed right on my head! The trees gave me the ultimate snow job. I had taken my helmet, hat and gloves off to eat my lunch, so I had snow everywhere. I laughed. It was all I could do. Trees are tricksters! I hung out for another 20 minutes, and not one more chunk of snow fell off any of the trees. What are the odds? 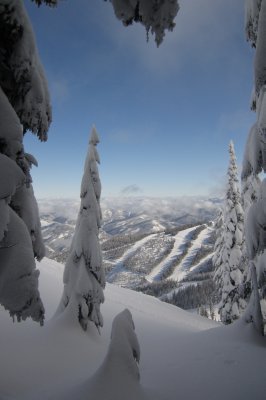 The Views From Wardner Peak 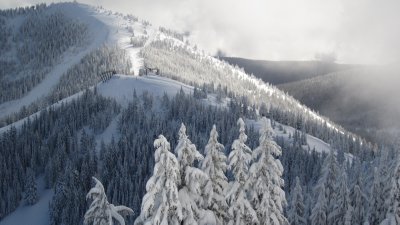 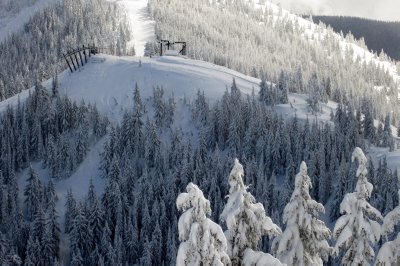 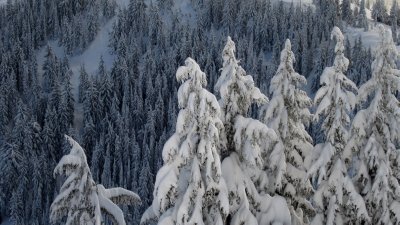 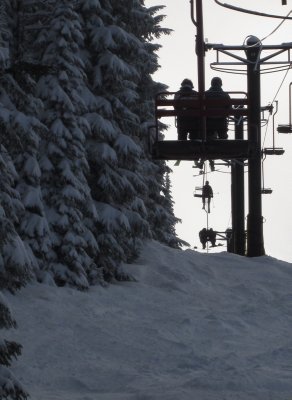 I was riding the chairlift the other day when a hotshot skier rocketed by below me. The people in the chair behind me saw him and instinctively howled out a long, “WOOOOOOOOOOOOOOO.” The word “Woo” seems to be what we all yell out to vocalize our enjoyment of life. At one time, possibly the early 1900‘s, the word that was used was, “WEEEEEEEEEEEEE,” (picture someone riding a slide or Ferris wheel). So what’s next? In another eighty years, will we be yelling, “WAAAAAAAAAA?” Some of you readers should take this logic to the street and be on the cutting edge of cool. Start yelling “WAAAAA” before anyone else.

I began to notice how many times I heard “Woo” being hollered on the mountain. It’s damn near universal. Since I have a lot of time to think about these things, I began to wonder about the various meanings of woo. At the time, I only knew two definitions of woo (and I realized I just rhymed a lot). To woo a lady (something at which I am quite good at if I do say so myself), is to make amorous advances towards someone. Secondly, Woo! The vocalized exclamation of enjoyment.

I went home and looked up woo on the internet and came up with some other definitions: In Chinese, Woo means the number five. While I was thinking of Chinese, I wondered if people aren’t yelling woo, but wu. Wu is a dialect of Chinese spoken in the Yangtze delta.

The next time I was up on the mountain and began to hear the distant calls of “Wooooooooooo!” I started laughing. I imagined them not yelling for enjoyment, but to encourage romance. Or maybe they really like the number five. Or perhaps, they are fans of the Yangtze dialect.

It’s been a good week on the mountain, however the winds of change are blowing once again. Sadly, this upcoming week is going to be my last week of ski bumming here in Idaho. Against my better judgment, I have agreed to go back to work for a month down in Mexico. I know it sounds foolish, but I have recently bought tickets to Alaska in May. I figured it would be a good idea to refill up my coffers before I head out on that (hopefully) epic adventure. May is far away, and for now, I’m going to enjoy these last few days of relishing the life of a ski bum.

Farewell for this week, and I hope to hear you yelling out your appreciation for the number five!

Sounds like the universe thought you needed a whump upside the head. Or maybe it was an Ent.

Awesome shots. I am jealous of the spectacular scenes, fresh air and amount of snow you got to experience. It sounds like an awesome day!