Powder, How to Ski It, The Best Day, Coeur D'Alene, Longboarding, Riverside Contemplation

If I never ski again, I will still die a happy man. I have had an amazing week, and I can sum it up in three words: powder and longboarding. Powder is every skiers preferred snow to ski on, we dream about skiing down mountain slopes with eight inches of light fluffy powder on which to glide. In the last eight days, I went skiing five times. On each day, there was at least six inches of powder. On some of those days, it was knee deep, and on others thigh deep. There are days where I can’t believe my luck. 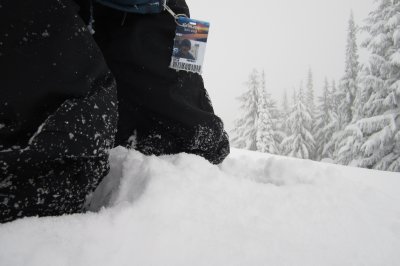 At first glance, skiing in powder looks easy. Good skiers make it look simple and incredibly fun. In practice, I’ve found it to be a lot harder than it looks. It is incredibly demanding on the leg muscles. Every move you make with your skis has six inches of friction (often more) to work through and it can wear you down. There is a technique to skiing through deep powder, and it takes practice to get proficient at it. Here are some general tips I have used to ski through powder. It is important to use your poles to set up your turns and keep your balance. It is better to keep your skis together to help you stay higher in the snow. It is often easier to get into a “hop” rhythm, where you hop though your turns to stay higher in the powder. All this extra effort wears down your muscles quicker, but the exhilaration of carving up a beautiful line of fresh powder helps you forget your muscles, at least until you reach the bottom of the run.

My Best Day of Skiing

My phone has been going through catatonic fits lately, and so on the night before the start of the snowstorm I wasn’t able to set an alarm. I figured my body clock would get me up sometime around seven thirty in the morning. When I got out of bed, it was eight. I checked the snowfall total on the hill, and found there to be six inches of fresh snow. Nice! I threw on my ski clothes, grabbed my gear, filled my coffee cup and was out the door by twenty after eight. I love walking to the gondola in the morning. It was lightly snowing, and beautiful.

There was not much of a line for the gondola, and I stepped aboard with three other older guys. We chatted for the entire twenty-minute ride up to the mountain house. Mostly, I did the talking, as they had many questions for me once they learned I was a ski bum. I don’t mind, I like to meet people, and introduce them to my lifestyle. I bade them farewell, and went down to the locker room to put on my gear and get my skis.

When I stepped outside, I knew it was going to be good. The six inches of powder was light, and new snow was still coming down hard. It looked ideal. I had taken a three day hiatus from the mountain (which I’ll discuss later on in this entry), and on my first run, it was though I had completely forgotten how to ski. I awkwardly made my way down my first run, a run through a thick gladed section. My legs were not moving, my mind wasn’t into it, and though I made it through the glades, I face planted hard when I broke onto an open area. I got up, wondered what happened to my skiing ability and continued down the hill.

Silver Mountain has two peaks, Kellogg and Wardner. Kellogg is on the east side and one hundred feet higher than Wardner peak to the west. I made it down the runs on the Kellogg side, but I was not in good form. It looked like it was going to be a long day for me. I usually ski the east side of the mountain during the first hour or so, taking my favorite runs until a line begins to form at the chairlift. Today was no different, and I went over to the Wardner side at about ten thirty.

It was though I turned on a switch: My skiing ability suddenly improved. I don’t know how it happened, but all of a sudden I had gained coordination and in fact was skiing better than I ever had in deep powder. And it was deep! I have not seen it snow this hard in my life, and it was snowing well over an inch an hour. Any tracks I made early in the day were gone by noon. I had a ball, there was no fear of falling, and I took any jump I could find, landing most of them. It was awesome. 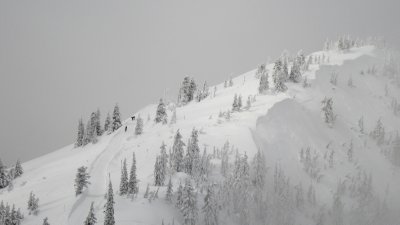 I made the hike to the top of Wardner Peak. I really like this hike. It is a relatively steep, winding mountain path. It exposes you to the biting west wind. I was carrying my skis on my shoulder and using my poles as walking sticks. My face was going numb from the strong breeze that was whipping the heavy snow across the path with frenzied power. There was hardly any visibility, and the tracks of previous hikers were disappearing into the drifts. I was in my element.
I wound my way up to the peak slowly and steadily, breathing hard in the raw elements. I was reminded of Lin Yutang’s observation that, “the winter wind is like ginger.” 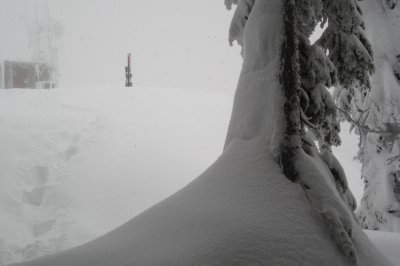 When I reached the top, I stuck my skis in the snow, and waded off to my mountain top temple. The snow was up to my thighs, and it was a bit of a struggle to get to my sitting spot. I sat in the snow, protected from the wind by the tall pines that reside there. I rested, cooled down, and ate a Clementine. I meditated for a while and said, “Thanks.” I really enjoy sitting in the snow in a beautiful copse of trees.

I struggled back to my skis, snapped in, and did not look back. It was an epic day, and I have never skied better, or have had better snow conditions. All told, I spent seven hours straight in temperatures near ten degrees (F). My body was exhausted at three. That is when I decided to stop for the day. I was once warned that if I continued to make weird faces that my face would freeze that way. Well, I have proven the old adage is true, and my face has frozen for eternity with this dumb grin on my face. Ah well, it was well worth it. 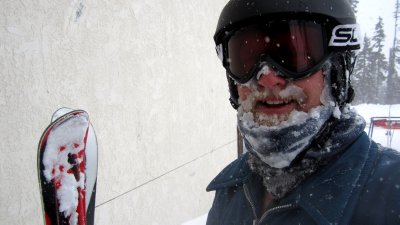 I stepped off the gondola and started walking home through gently falling snow. I saw a young girl maybe about 8 years old. She was standing out in the open, her mother watching nearby, and she opened her mouth and gazed skyward. She began to catch snowflakes on her tongue and smiled with each success. I smiled too, it was too cute not to. Long live winter! 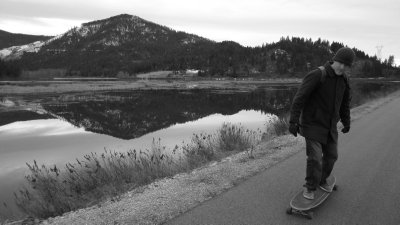 I have fallen in love with my longboard again. On three consecutive days, I took it out for a ride. I spent most of that time riding the deserted “Trail of the Coeur D’Alene.” I also went to Coeur D’Alene, the city, located on the north side of the lake of the same name. It seems like this section of Idaho is all about the name “Coeur D’Alene.” I spent all afternoon in the lakeside park. I enjoyed cruising the pathways and enjoying the gigantic trees that preside there.

The Magnificent Trees of Coeur D’Alene
The sun broke through the heavy clouds and lit these trees in perfect light. 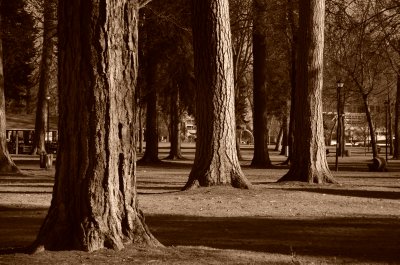 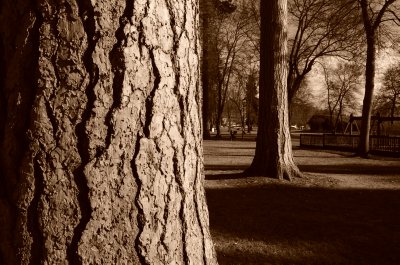 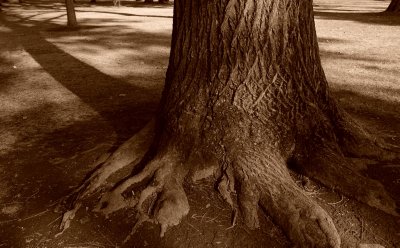 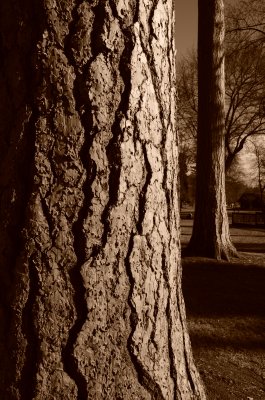 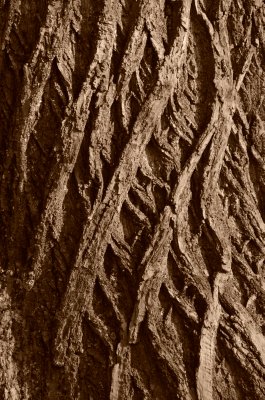 The city of Coeur D’Alene is probably my favorite city in Idaho. Though I haven’t spent a lot of time there, I have been impressed when I have. It has a cool downtown area, a good park, one of my favorite restaurants in northern Idaho, The Moontime, a groovy yoga studio that I attend, and a nice lake. 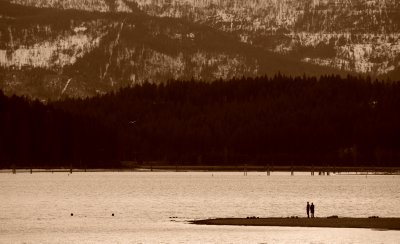 The people are friendly, and it has a good vibe to it. There were many longboarders out, along with other people chasing their muse.

I went on a couple of longer jaunts covering ten miles and six miles on different sections of the Trail of the Coeur D‘Alene. I have talked about the finer points of the Trail of the Coeur D’Alene in past entries, see Exploring Silver Valley (Jan 2010). I love long boarding, I love the freedom it offers me as I pump my legs easily and ride the board for as far as gravity will take me. It is good exercise and fun at the same time. I can easily cover a lot of distance in relative ease.

I took my small camera along and the following is my first collection of longboarding photos. 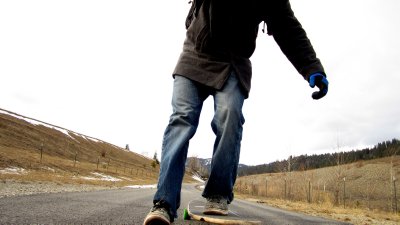 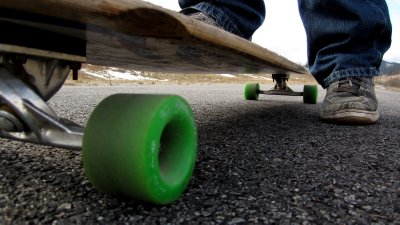 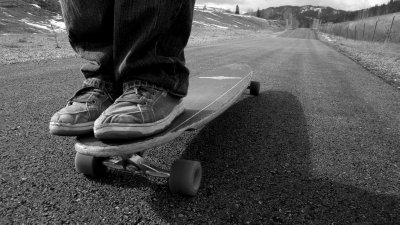 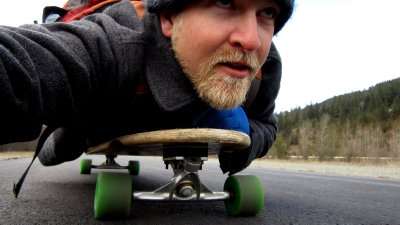 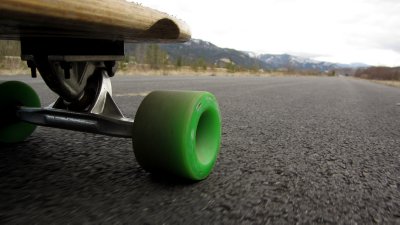 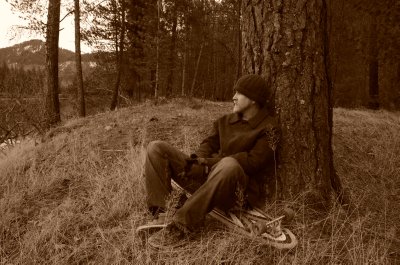 "I went on another longboarding excursion today under bright overcast skies. It was pleasant as I cruised over a bare asphalt trail covered in a scattered bed of pine needles. After three miles, I was stymied by ice and snow, so I found a place to sit under an old red pine. I watched the life of the wintering river, and heard the chorus of Canadian geese bugling in the distance. At one point, it became silent, and I heard the distinct scream of a red-tailed hawk. You know, the “Keeee-hhhhurrrrrrrrrrrrrr” the clichéd punctuation of a truly desolate place. It was marvelous."

I now have options: If it snows, I head up to my wintry mountain. If it is warm, I stay down in the valley and take my longboard for a ride! It is a good life. 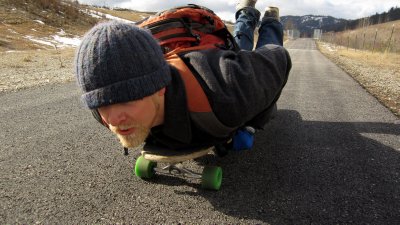 Until next week!
Cheers!

Love the carved trees! Now I want to knit that into a hat!

I am also amazed by how much good snow improves my skiing ability.