The Long Road to Idaho: The North Dakota Sessions 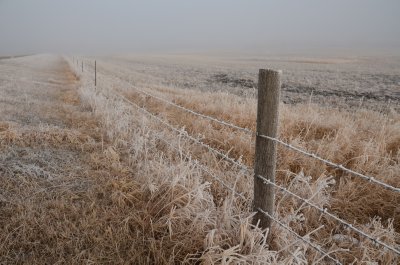 Who knew North Dakota could be so beautiful? Well, in truth, I did, and this morning proved it once again. I had left my hotel at 8 a.m. It was still gloomy, the fog still hasn’t burned off. The air is cold and fresh. The parking lot is a little slick, and I step into the driver’s seat and settle in. I stop for a cup of coffee, set up my mp3 player to listen to a book, and head out onto the freeway.

After a snork or two of coffee, and a few miles later, I really start enjoying the view. It is beautiful out! The fog has frozen onto everything, leaving everything encrusted in a thin layer of delicate frost. The thick mist still holds over the prairie, and the crispy grass and rolling landscape lines fade off into the clouds. 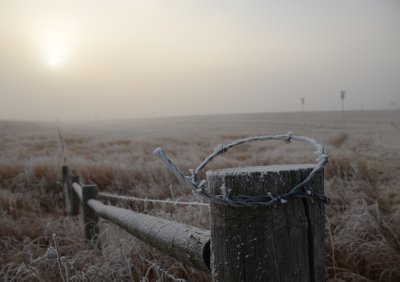 I am enthralled. I take the first exit that I can, and pull over on a small dirt frontage road. I grab my camera, and step out into the cold. I see a barbwire fence covered in frost. I set up a few photos with the fence as my leading line that leads to the dull gold glow of the rising sun obscured by the fog. It is glorious. 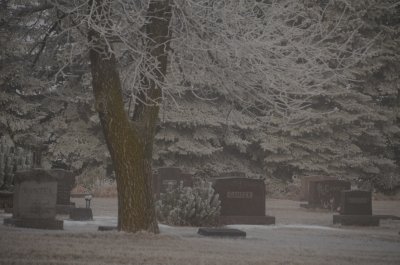 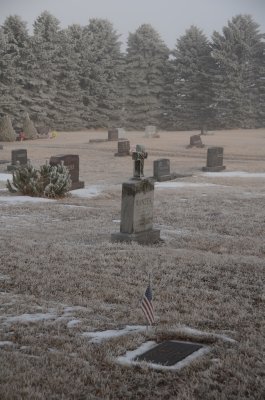 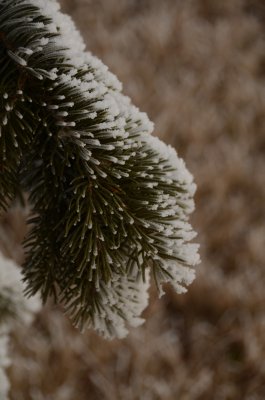 I love starting my day with a good morning photo shoot. I jump back in the van and drive along the dirt road. I see a grove of trees on my left, and in them resides a cemetery. I pull over, get out and begin exploring the trees for possible angles. The frost has softened the world, giving the landscape a sepia like feel to it. I spend twenty minutes out in the cold, and my hands are freezing by the time I get back in the van. 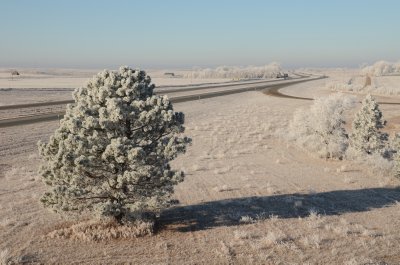 I drive back to the freeway, and accelerate back onto I-90 west. It isn’t long before the sun breaks through the thick fog, and above me, a bright blue sky is forming above the clouds. It is too much for me to take, and I get off on the next exit. Just south of the freeway are long rows of cottonwood trees. Cottonwoods are among my favorite trees, commonly found along the streambeds of the American west. They are huge trees. They have charisma and charm in their trunks and branches. I find they often photograph very well. 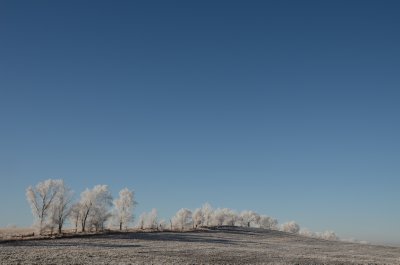 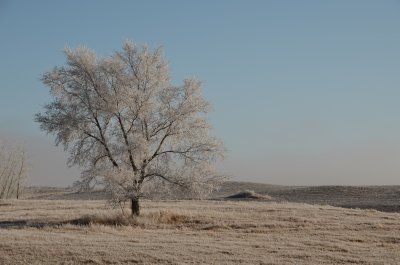 I head south along a crunchy frozen farm road and take in the magical landscapes all around me. It’s beautiful. The crisp white branches of the cottonwoods made for a pleasant contrast with the high blue sky of northern winter. For the first time in three days, the sun came out, and brought a cheerful brightness to the long landscapes. I got out of the van, and began walking up and down the road, composing and shooting, thoroughly enjoying my impromptu photo shoot. 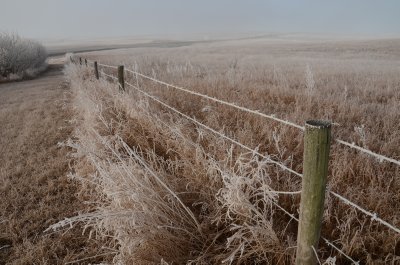 Satisfied, I saddled up once again, retraced my way to the freeway and headed west. I made one more stop at a rest area to use the loo, but after that, I didn’t make any recreational stops for the rest of the day. 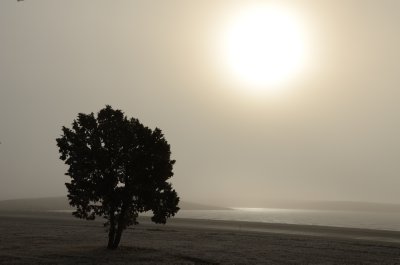 For those of you who have never driven across America, let me say that America is huge. I drove for 11 hours today, and covered 630 miles. I’m still almost 500 miles away from my destination. Most of this distance will be crossing the broad plains and river valleys that weave between the “island” mountain ranges of western Montana.

I bring this up, because I as an advisor on TravellersPoint for the United States, I often get asked how long it will take to drive across the country. There are many people who have three weeks of time to spend in America, and they want to see everything. I have to tell them that they are going to be spending a lot of time in a car. That’s where I was at today, burning up the miles, listening to two books and music in between. Today I listened to “The Day of the Jackal” by Frederick Forsythe and “The Atlantic” by Simon Winchester. Both are very good books. 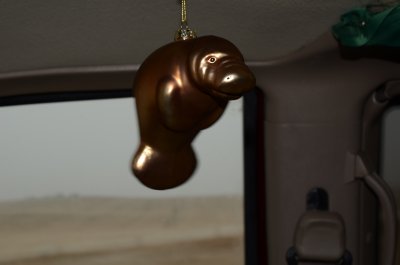 Eventually the boredom set in, and I let my mind wander. I tried talking to my manatee who is riding shotgun on this trip. He seemed more interested in looking out the window than conversation, and I eventually left him in his brooding silence. I don’t think North Dakota has much to offer a manatee, and I suppose that is why he was so gloomy.

I sang along with my music, I yodeled, I took pictures, I ate cheese and crackers for a snack, and had a bologna sandwich for lunch. Steady Rolling. I rambled on, and on, and on. I passed through an entire weather system, crossing underneath a cloud that stretched for 450 miles between central North Dakota and Billings, Montana. I watched the sunset, and was almost blinded by the intense last light of day that lined up perfectly with the road ahead of me.

At dusk, I still had another hundred miles to go, and I figured out my plan for the next couple of days. I've decided to stop my photo shoots every 100 miles. I would still be in North Dakota if I kept that up. I like the idea a lot, but it isn't worth it on this trip.

Tomorrow, I’m going to take a detour off the beaten path, and head down into Yellowstone National Park. I want to soak in a hot spring, and I know just where to find one.

“The enjoyment of an idle life doesn’t cost any money…It must come from an inner richness of the soul in a man who loves the simple ways of life and who is somewhat impatient with the business of making money.”
~ Lin Yutang