The Long Journey to Idaho: The Minnesota Sessions

A Photo Shoot Every 100 Miles, The Power of Pizza, Abandoned Parks in Mist, Asleep at the Wheel

While traveling south along Minnesota state highway 23, I noticed my odometer was nearing 210,000 miles. An idea popped into my head to make this trip more interesting, and I decided to stop every 100 hundred miles and make a photo shoot of whatever was there. I became excited about the idea, and when the odometer turned, I slowed down and found a safe place to park on side of the road. I stepped out, and began looking at my options. As it was, it was a very gray, overcast day in Minnesota, and a feeling of contented quiet held over the entire state from the shores of Lake Superior in Duluth, all the way down to the suburbs of St. Paul. 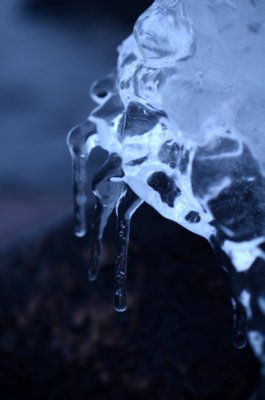 I stepped into a low lying wetland area, looking at the puffy tubes of cattails, and found my shot. 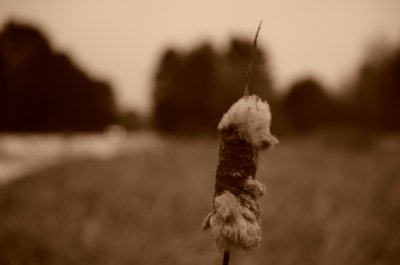 Satisfied, I climbed back into the van and headed south another hundred miles, which happened to be a small roadside park near Lake Josephine in the northern suburbs of St. Paul. I became enamored with the oak trees that resided on a small hill, and found my new lens to be just the thing to take pictures of the dried oak leaves still on the trees. 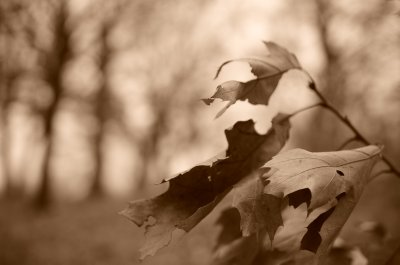 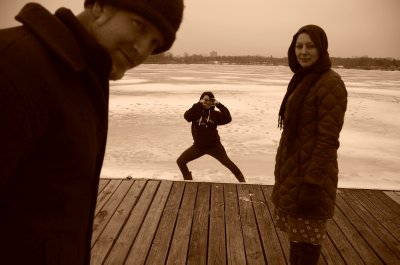 I found my friends in St. Paul. We spent the day hanging out, enjoying good conversation, with a field trip to the Como Park Greenhouse, and Como Lake. The greenhouse was so beautiful, full of flowery scents and reminders of the warm greens of summer. After our lark, we returned to the house. In the evening, I made homemade pizza, and we spent a wonderful evening talking, eating delicious (if I do say so myself) pizza, and drinking wine. It was such a good day. 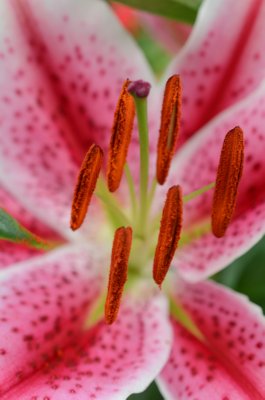 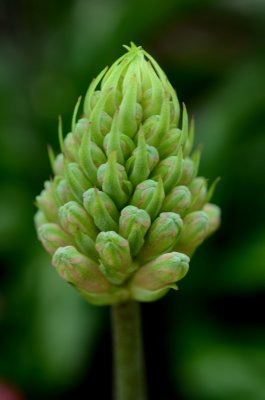 Pizza Party
I love making pizza. I also love making pizza for other people when i'm travelling. If you like pizza, and meeting roving vagabonds, drop me an invite, and I might bake you a pizza! 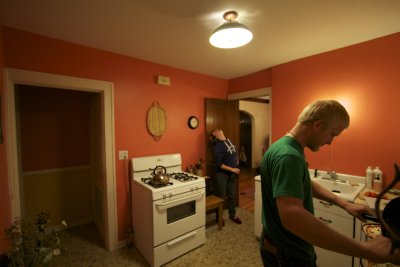 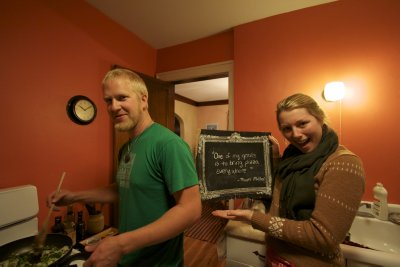 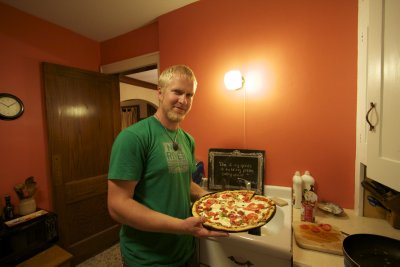 I woke up very early, slipping out of the cool, dark house well before sun up. It was dark, and very foggy out, a moist heavy feeling to the air. I started up the van, and rolled out heading westerly to the small town of St. Michael, MN. My brother Karl resides there, and as I have not spent much time with him lately, I was excited to take in his company. 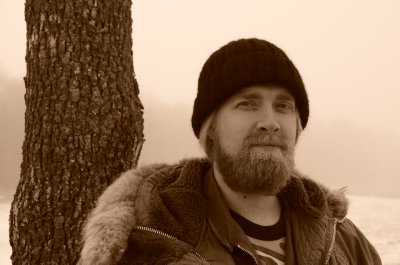 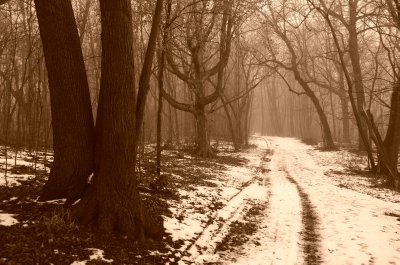 After getting some tea from the local coffee shop, we drove out to a small park on Lake Beebe. Soon we were wandering around in the airy mists, of an abandoned park. Karl and I are quite close, and it wasn’t long before we were lost in compelling conversation. We discussed the park, girls, the beauty of mist, the good air we were breathing, brain exercises, the stupidity of television, three year plans, the beauty of the trees we were walking around, cutting a moat around an ice fisherman’s shack as a practical joke, the sick system that is American politics, good sitting spots, how hungry we were (which we soon remedied), Artificial Intelligence, and other nonsense. 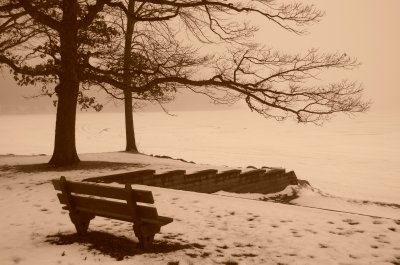 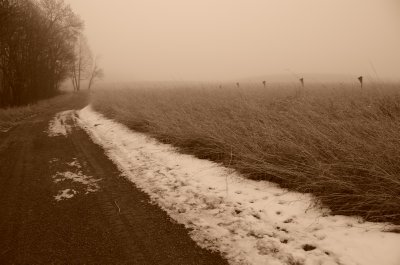 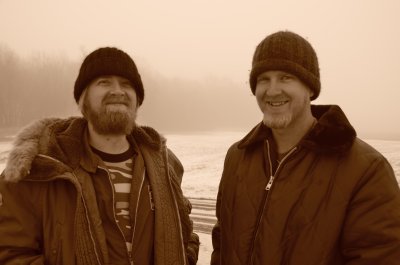 We went back to his house so I could get my long board skateboard, and after awhile, I said, “Seeya later, Bub.” And with that, I drove away. I hadn’t driven very far, when I realized that I was very sleepy, and I really had to use the bathroom. As I had planned to drive well into North Dakota, my sleepiness was going to be a problem. I resorted to my old tricks to stay awake: I slapped myself in the face (this doesn’t work), I rolled down the windows, I yelled at myself, and drove on. 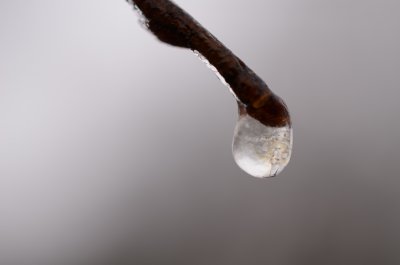 I finished one book on my mp3 player (Al Capone Does My Shirts) and started another (The Atlantic: by Simon Winchester). I love listening to books while I drive. 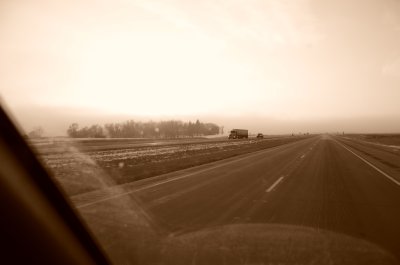 The fog came back just before I crossed into North Dakota. It was beautiful, and completely obscured the sun that was getting low in the sky. Finally, it grew dark, and the temperature gauge read 30 degrees (F). It was just cold enough to allow that fog to start freezing on the roadway and on the van. Not good. I looked at distance signs to the next sign, and it looked like Bismarck was the next major city of any size, and it was another two hours away. I sighed, and went through another round of slapping myself, attempting to stave off sleep for another ten minutes.

Then, I noticed a big billboard on the side of the road advertising a couple miles up the road. There were more of them, and I grew excited. JAMESTOWN! I had forgotten about Jamestown. It was the equivalent of getting out of jail a year early; I happily exited the freeway, and followed the signs to a hotel.

Ten minutes later, I was standing in my room, feeling good about myself. I knew that a hot shower, a delicious dinner of homemade chili and a beer followed by a good long sleep in a quiet bed. Ahh… Is this not happiness? 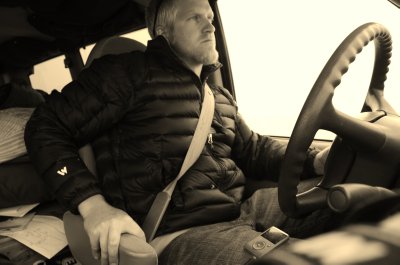 The journey continues tomorrow when I take on the western side of North Dakota, and decide on where to play in Montana. Stay Tuned!