Project: One Good Photograph A Day

I like to think I take one good photograph a day. Now, I realize this idea is purely subjective. When I say this, I realize that not everyone would agree with me on what a good photograph would consist of, or agree on my choice of “good” photographs. However, I am the only judge in this competition of self-satisfaction, and so I only have to please myself to place in this contest.

That being said, I offer you my subjects for the past week. I do not take photographs everyday, some days I am either too busy, or nothing of interest caught my eye. On other days, it seems like I take up my camera at dawn and set it down after sunset. This week, there were only two days that I didn’t take out my camera, and so offer other satisfying pictures I captured to balance out my week.

These photos are of various subjects on the Sea of Cortez, east of the peninsula of Baja California Sur. 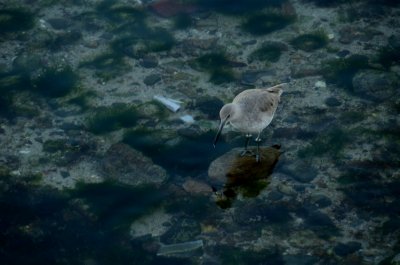 I was strolling along the boardwalk near the beach one early morning after work. The human-like early birds of La Paz were all out, walking, jogging, biking or sitting. La Paz is a friendly city, and I nodded to a lot of people, offering a sincere, “Buen Dias” and receiving the same with a smile in return. The sidewalk neared the edge of the sea, and I noticed this Long Billed Dowitcher foraging for its morning meal. I stopped at a bench, took out my camera, and took this photo of the bird.

ON THE CUSP OF SHADOW AND LIGHT 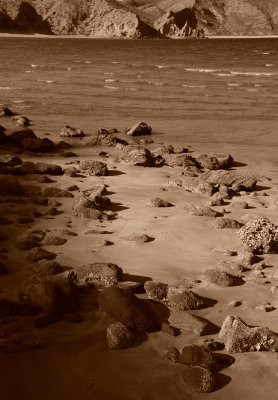 I had spent the afternoon perched on a bluff high above the emerald green waters of San Juanico. It was an amazing place to hang out. Turkey vultures soared by riding the wind currents not more than 35 feet away from me (probably an exaggeration). I was exposed to the elements, and therefore in my element. Upon descending (also known as skidding recklessly down) the trail, I was making my way back along the beach to the land when this scene appealed to me. I have always loved shadows, especially when I can position myself on the very edge of dark and light. In this zone, the light moves very quickly, but I find these scenes to be quite alluring compared to full on shadow or full on light.

ORGAN PIPE CACTUS ON THE NORTH RIDGE OF DANZANTE 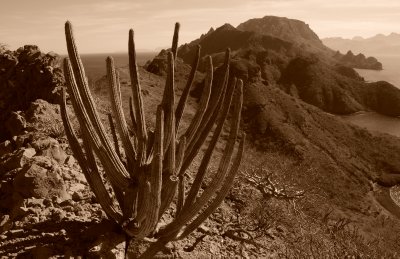 I went for a hike on Isla Danzante (Island of the Dancer). This is a great name for an island. The Spanish supposedly name it when they found the island. There was a clutch of native folk rejoicing in their way-- dancing up a storm. I was performing my own dance on this beautiful island. I had climbed my way to the highest point on the north end of the island. It was a scramble up a steep loose gravel trail. It was mildly taxing, but not that long. I had climbed to this point last year, and when I reached the top, I decided I wanted more.

Looking southward, I saw another high point that I had never climbed, and it sparked my interest. To get there, I was going to traverse the north ridge of Danzante. This was no easy task. The entire ridge looked to be made of crumbling rock along a narrow knife-edge. I pondered my moves, and held firm to my one spot of good footing. I decided that I would only take one step to see how it was. If I didn’t like it, I could take one step back, and call it a day. So I took that step, and it held true. It turns out, the worst looking part of the traverse held the best footing. I would have never known, if I hadn’t tried. Halfway across the ridge, and finally on better ground, I found this attractive clump of organ pipe cactus. It was an easy composition, and I decided upon a sepia exposure, as there just wasn’t much color to the scene. When there is not much color in a scene, why try to make a color image?

To me, the Sierra de la Giganta, are among the prettiest mountain ranges in North America. Their dramatic backdrop has improved many of my photographs, and I’m longing for the day when I can spend an entire month roaming along their rugged peaks and deep arroyos.

We were on approach to our morning anchorage just as the sun came up. I had time to take these photographs of the beautiful morning glow that reflected off the sandstone to a gentle orange blush. 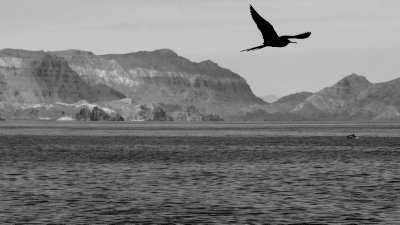 I am lucky. I’ve been blessed with very good photographic timing, and I offer this shot as my proof. I had never taken a successful picture of a magnificent frigate bird before this shot. We were watching a feeding frenzy take place on the surface of the ocean just off the rocky point of Los Gatos. This frigate bird flew by fairly close to where I was standing, and I panned my camera along with it in flight shooting the whole way. I didn’t know the common dolphin was airborne as well, until I looked at the photo on my computer. When I saw it, I laughed aloud. How lucky can a guy get?

This is my favorite picture of the week.

As I mentioned, we were watching a full-blown feeding frenzy take place not more than a hundred yards away from the boat. There were common dolphins driving the bait to the surface, and the sea birds were getting in on the action. It was interesting watching the various techniques used by the birds, the large brown pelicans would fly above the mass and dive missile like into the ball breaking through the surface with their large beaks. The frigate birds don’t like to get wet, and would streak in, hovering briefly to snap up a fish with it’s beak before snapping its wing and gliding away. The frigate bird looks to be the inspiration to the skydiver’s spandex wing suit. It has a forked tail, and narrow, yet very maneuverable black wings. The gulls would simple land, and swim nipping at the bits left by the others before squawking and moving on.

It was awesome to watch this kind of behavior first hand, and not on a nature documentary. 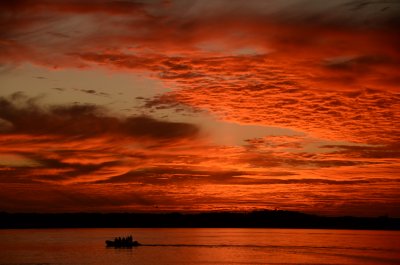 Looking at the pre-dawn sky, I knew the sunrise had potential to be a good one. It isn’t often that there is a nice layer of scattered clouds over the eastern horizon on the Sea of Cortez. As the sun climbed closer to the horizon, the most brilliant oranges I have seen in some time began to erupt over the island. I finished my duties as quickly as I could in order to have time to grab my camera and document this amazing display. The last zodiac full of guests was heading directly into the fiery sky, and it was an easy leading line into the scene. I shot my fill, and then went up to the highest point on the ship to drink this scene into my memory. 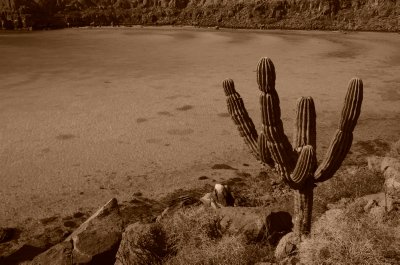 Having worked a full day, all I wanted to do was go to the beach and go for a swim. This seems like and easy enough task to accomplish, but in reality, it wasn’t as easy as it sounds. During the full moon, the tides on the Sea of Cortez pull a little higher than normal, and the shallow bay of Ensenada Grande is victim to them. I could not get a ride to the shore, I had to get out and shuffle my feet a hundred yards or so to get to the beach. From there, I took off my life jacket, and proceeded to walk another hundred yards along the shore back out into the bay to find water deep enough to sit down in. It felt good, and I sat there with my body immersed up to my neck in beautifully clear green water. Satisfied, I stepped out of the water and air dried. Who needs a towel in the desert? Not me. As I was about to make my way back to the populated beach, I noticed a cardon cactus with some character perched high above me. I thought about it, and figured with the right angle, I could make a compelling scene of the cactus and the bay. So I went rock climbing. How did going for a swim get so complicated? Anyway, I love spontaneous decisions, and my hunch was well rewarded.

I couldn't resist one more.

Cheers to a great week down in Mexico!

Like the narration and fabulous photos. Am going to review your archives for more travel notes, ideas and tips. Should your ship ever sail to Central Florida, Vero Beach is where we've set up our homestead. You are welcome anytime. G n G