The Rio Grande, The Window View, Rain in the Desert, The Best View in Texas

I rambled on down to Big Bend Country in southwest Texas. Big Bend Country is so named after the big bend that occurs in the Rio Grande, that famous, well storied muddy crossing that separates the United States and Mexico. I like the Rio Grande. In a parched desert where water is scarce (especially this year), it was good to see a cold-water stream cheerily chuckling through the rocks, desert and canyon. 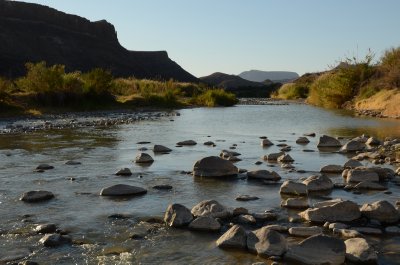 When looking at a map, the boundary marking the border looks like an imposing river of great magnitude. Something on the size of the Amazon, or even the Mississippi, clearly marked, well guarded and defined. When I stood on the gravelly desert shoreline under the glare of the noonday sun, I saw a river that was far less imposing, defined and guarded than I ever would have figured. 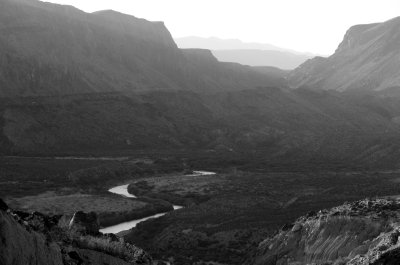 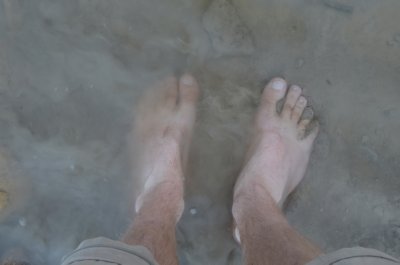 The river level is way down this year due to a lack of rain. Despite having all of my expectations dashed (usually a good thing, especially when traveling), I still thought the river was charming. It was cloudy blue, gurgling healthily through the rocks and between the giant river cane. The giant river cane was impressive, a towering reed that rises well over fifteen feet above the river growing in a thick forest of reeds. This plant is a non-native species (originally from Asia), invasive, having been introduced several hundred years earlier perhaps by the Spanish, though that is mere speculation among scientists.

From what I could tell, the U.S. border isn’t as well guarded as one would think, what with all the news stories of recent years highlighting the problems of drug runners, “illegal” aliens (what a horrible name), and border crossings. I didn’t see much of a presence from the border patrol, but that doesn’t necessarily mean they aren’t there. They are a sophisticated bunch using hidden cameras, stings, and other unseen ploys. 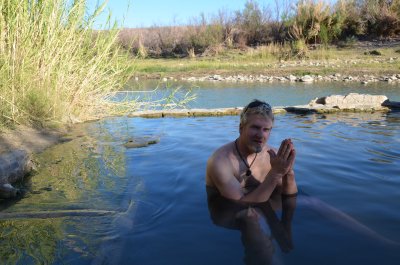 I saw Mexicans crossing into the U.S. on two occasions. We were walking along the sandy path to the 105-degree hot spring outside of the Rio Grande Village, I saw three Mexicans wading across the river. This made me slightly alarmed, as there was a large sign warning visitors of car break-ins (I admit this was unfounded, and I apologize. It could‘ve been anyone). Since it was a busy day, we continued on to the hot spring and had a good soak. As we steeped, one of the Mexicans, ran up, hurriedly grabbing his inventory of beadwork trinkets, minerals and walking sticks, before running back to the bank and crossing back over to Mexico. He was selling his wares on the U.S. side, plying for cash from sympathetic tourists. A couple of minutes later, a park ranger ambled by, mostly keeping a presence of law to keep the Mexicans honest, and on their guard.

I figured the reason there weren’t any border patrol guys running around was that this probably wasn’t a hot spot for illegal crossings. In Big Bend National Park, you are still a long way from any population center, and therefore not the target market. The Mexican’s I witnessed had no troubles crossing and re-crossing the border. It looked as though a couple of guys kept an eye out for rangers and the border patrol, while one man crossed to make his sales pitch. 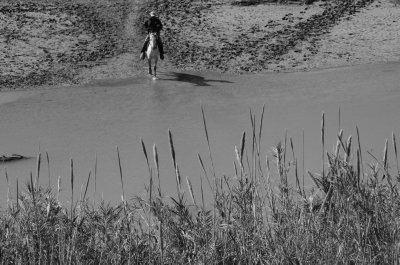 It was novel to see Mexicans cross the river. I bet these guys have a lot of fun with it, so long as they aren’t caught. I had no interest in the knickknacks they were selling, but enjoyed watching them play cat and mouse with the rangers. 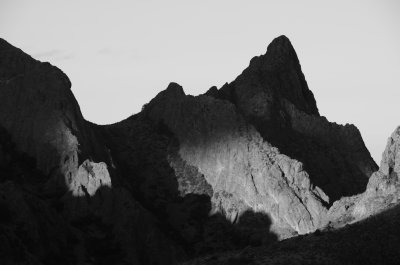 At first glance, Big Bend National Park is somewhat intimidating. It’s a huge park. The map they give you is gigantic, with lots of options for adventure. I had never been to Big Bend before, and I hadn’t done much research into the place. As we drove into the park, I had my eyes mostly on the map, trying to do some quick planning on what I wanted to see. We stopped at the Panther Junction Visitor’s Center, to get some information.

After perusing the photo books, postcards, and trail guides at the visitor’s center, I came up with a half ass plan to our visit. Visitor’s centers are great places to get information on most national parks, and this was no exception.

The first thing that caught my eye was the trail to the top of Mount Emory, the highest point in the park. At 7,795 ft, it seemed a worthy challenge, and a good way to introduce ourselves to the park. There is nothing like plodding slowly up a mountain to give one the feel of the place.

Since it was already past noon, we decided to find a campsite, hike out to see the view from “the window” and start early in the morning to take on the summit. 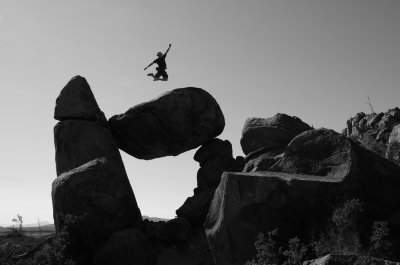 I also wanted to see the giant rock arch hidden somewhere up in the Grapevine hills. The photos and postcards of the arch were beautiful, and I wanted to see the place for myself. Besides the arch, the boulders around the valley looked climbable, and could be a fun place to play.

The Window View and the Rain 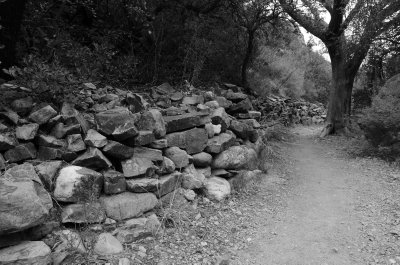 The hike out to the window view is a short one, about three miles round trip from the campground. It’s an easy hike. It was enjoyable cruising along on the wide flat path. It was a nice to be able to look away from the path unlike our treks on the rocky paths of the Guadalupe Mountains. The path followed the course of a dry wash, surrounded on all sides by high rocky canyon walls and Mt. Carter looming just to the west. 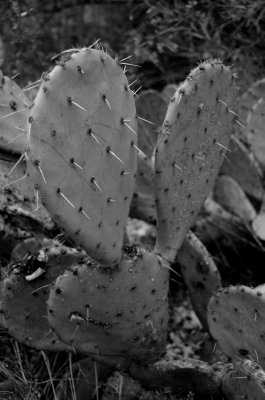 The Playboy Bunny of the Prickly Pear
Near the trailhead, there were many signs warning of mountain lions and bears. BBNP does not mess around when it comes to wildlife signage. On every trail we passed in the Chisos Basin, there were signs warning hikers of the dangers of wildlife. The bears and mountain lions are probably flattered to receive so much attention. It seemed unnecessary to me. I would be thrilled to see a mountain lion, but for as much time I’ve spent in the wild, I’ve only found their footprints, scat, and kills (a deer). 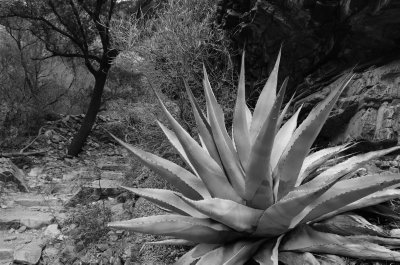 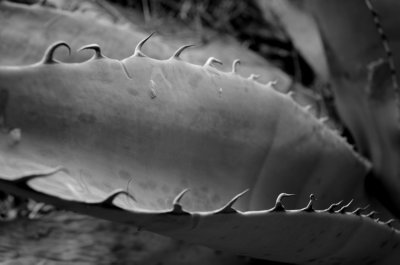 Along side of the trail grew the largest agave plants I’ve ever seen. The agave is a cool looking plant. It has greenish gray, stout stems that come to a lethal point. If you are ever falling out of an airplane, do not aim for an agave to land on. The other interesting thing about the agave is their reproductive stalk. Towards the end of their life cycle, agave will send up a tall flowering stalk that grows well over fifteen feet high. In short, it reproduces and dies, but it goes out with a bang. 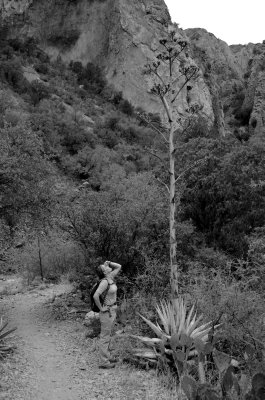 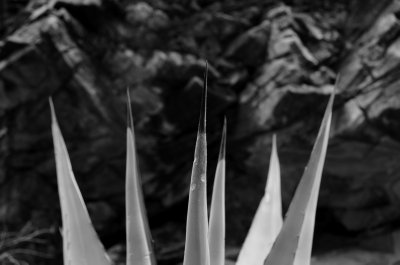 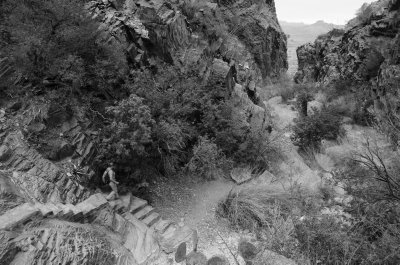 The trail followed the course of dusty dry wash. The canyon walls closed in on the trail, and we were soon walking through a rock canyon that twisted around boulders, rock shelves, and dry waterfalls out to the edge. The window view was on top of a high, dry waterfall. It was awesome. I would have loved to see the view, and listen to the roar of the falls if water was running. A spur trail runs down to oak canyon for a view of the falls. If you find yourself in Big Bend during the wet season, go check out these falls. 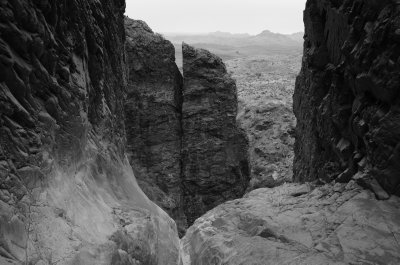 It began to rain.

As we walked back to the campground, the rain began to fall harder, and it was a beautiful sound. We stopped twice along the way back to sit down on a trailside bench to listen to the rain. Rainfall on a carpet of parched papery leaves is a beautiful sound. Tendrils of scent, the smell of rain, penetrated through the dusty air, and it smelled wonderful.

Conversation overtook the silence, and the smells. We chatted amiably for a quarter of an hour letting the conversation choose its own course. Eventually, we moved on, but not before we had enjoyed the experience of sitting through a rainsquall in the desert. 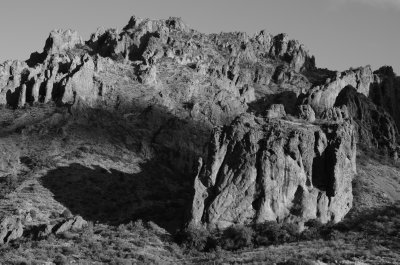 The Best View in Texas

The hike to the top of Mt. Emory was pleasant. The park service had recently updated the trail, making it a bit more user friendly to hiking. At this point, we were in great hiking shape and we cruised up the switchbacks through the cold morning shadows. At one point we stopped for a water break, and a small flock of Mexican Jays showed up. They had the look of beggars, handsome, fluffing their pretty blue feathers in hopes of fleecing some dumb hikers out of a pistachio. They had played this game before, but so had I. If they wanted my pistachio, they were going to have to pose on my hand for a picture. It was a tough bargain, but a fair one. We moved on. 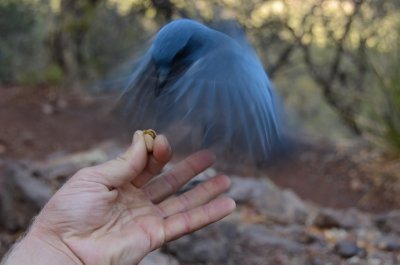 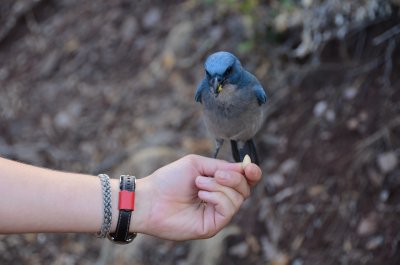 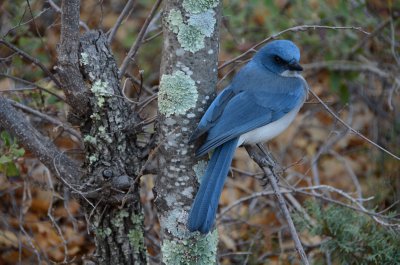 The higher we climbed, the more beautiful the scenery became. There were fat puffy clouds moving quickly through the blue skies, and the Chisos Mountains were on display in all their grandeur. The final thirty feet of the hike was more of a scramble up a rock wall. You have two options: left or right. Both scrambles go to a high point, but the right hand scramble rises a bit higher than the left peak. 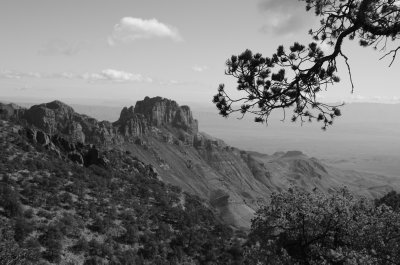 Sitting atop the right hand peak and overlooking the incredible mountain scenery was probably the highlight of my trip. It was awesome. It is easily the best view in Texas, bar none. 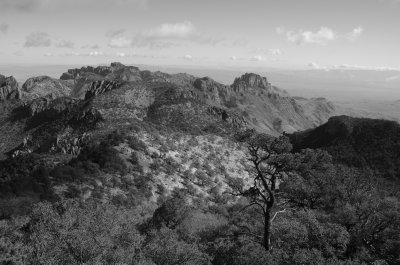 I laid down on the rocks, and closed my eyes, listening to the wind. Beautiful. 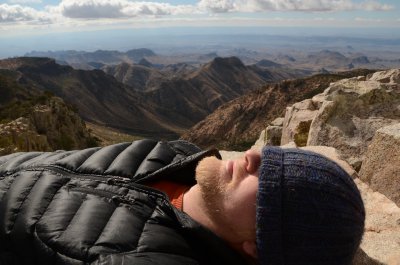 After an hour of watching the clouds pass us by, we retraced our steps back down the mountain to the lodge store. We bought ice cream, knowing full well that it is probably the best food to eat after a ten mile hike. It was a fine day, and I was really starting to like Big Bend National Park.

Hi Rhombus, we have added your blog to our blogroll. Lovely articles and photos.
www.savoirfaireworld.com