Working to Live, Not Living to Work

We all need traveling money. I‘m very devoted to my free time and to my travels. In order to travel as extensively as I do, I made a decision some years ago that I would give up my pursuit of collecting stuff. I gave away all but my most sentimental objects. I decided that I would live simply in order to give myself the time I needed to explore. I got out of debt, and I vowed never to return. In short, I’ve created my life the way I want it to be. Gary Ferguson in The Sylvan Path puts it this way: “Only a fool would trade a free life for the chance to store up goods.”

Fortunately for me, I’ve found great jobs that allow a lot of travel time in the off season. I’ve taken full advantage of these jobs, first building up a bank roll and then using my time off to hit the open road. I want to tell you about my some of my jobs and how they support my free spirited lifestyle.

When I graduated from college I found myself a job in Duluth, MN. I was a land surveying technician for 7 years. This job gave me steady, decent paying work that allowed me to be outside. As an added bonus, every winter I would get let go, due to lack of work. Now, that sounds bad, but for me it was PERFECT. I could save up all summer, knowing I’d have 3 months off to travel with during winter. I also knew I would be rehired in the spring, so there never was any need to look for work. Eventually, though I LOVED having winters off, I got bored with surveying. My job consisted of mostly doing geometry and math which I’ve never liked. It got to the point where I reached my professional high point for the foreseeable future. My company was changing, it wasn’t a fun place to work anymore. Maybe I was jaded with doing the same work for so long, but it was time to try something new. I’m the kind of guy who likes to keep my mind going, I like learning new skills. After threatening to quit for years, I finally did. I have no regrets. 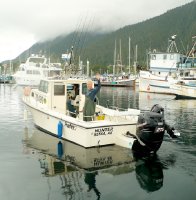 The next job I found was completely different. I became a deckhand for an Alaskan charter fishing lodge out of Sitka, Alaska. I’ve always wanted to go to Alaska. I wanted to work on the ocean, to see if I could take what the ocean was dishing out. I was going to be doing something I was interested in, and so my mind would be learning new skills, and getting new experiences. I didn’t have any experience on the ocean, had no skills a deckhand needs other than a great attitude, willingness to learn, and hard working. I didn’t let the lack of skills get me down. I figured I could learn anything I needed to, and I was right. 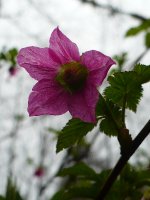 In early April, my friend and I packed up the van and went on a 2 week road trip up to Prince Rupert, British Columbia where we would meet our ferry which would take us to Baranoff Island, and Sitka. I already liked this job. Two weeks of traveling just to get to the job, is a definite plus for me. We enjoyed the trip, taking our time through the Palouse region of SE Washington. Then we saw the Columbia River Gorge in full spring bloom. Finally, we worked our way up the coast through Olympic Nat’l park and to the border. After customs, we drove north 400 miles to Prince George via the Frasier River Gorge. Then west 400 miles to Prince Rupert where we would meet our ferry. We spent a day taking in the foggy, rain swept scenes of the Inside Passage. It was very dreary. Finally, we landed in Sitka at 4 am, and I had my first taste of the beauty Alaska had to offer.

The ocean is many things. It’s describable beautiful, It’s a great metaphor for life; the way it is always moving and flowing, rising and falling, always changing. It has it’s own movement and rhythm. It’s many different self sustaining eco-systems in one. It’s also a terrific backdrop for summer employment. I love the ocean. The romance of working on the sea, the gorgeous views, the fishing, all the wildlife, the movement all speaks to me. No, it YELLS at me! In my first weeks, I began learning the ropes, literally and figuratively. I found out I’m not prone to sea sickness, which was awesome. It took me half of the summer to get my “sea legs”. In the beginning of the summer, I was taking 10 extra steps just trying to stagger across the heaving deck of our 30 foot boats (picture a drunken Irish jig). Everyday was different. I’ve seen dead flat calm seas, with the hot baking sun down on us, all of us stripped down to tee shirts, and baking our pale skin. I remember fondly the day we found ourselves in 20 ft swells, that we rode like a bobbing bottle. It was so smooth you didn’t even know you were rising and falling unless you’d look out over the seascape. Nearby boats would disappear when we were both in the trough. Then you could see the unbroken chain of swells marching in to smash the island from the crest of the swell. Some days it would rain all day, the ocean was nasty and unsafe, so we had to fish in the inside passage. We were surrounded by ocean views of rolling ocean meeting jagged rocky, spruce covered cliffs and mountains of the islands we fished around. 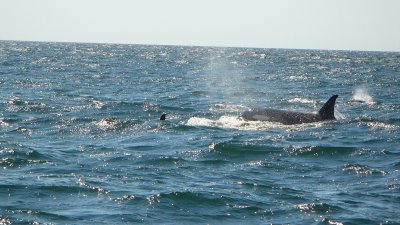 The sea life we saw was spectacular. I saw humpback whales at least 3 times a week, surfacing and diving, blowing (the stench that comes out of a whales blow hole is terrible, a mix of rotten fish guts and bad farts), breaching (when they jump completely out of the water), fluke diving and pectoral slapping to stun fish. I saw harbor seals, sea lions, which would sometimes steal our salmon while our clients were reeling them in. I saw a pod of Orca whales, working in tandem to catch salmon. The birds were constantly around us, my favorite, the huge Albatross would swoop around us like B-1 bombers, inches from the water. I saw murres, gulls, tufted puffins, and dozens of others I didn’t know the names of. Bald Eagles were everywhere. Next to our lodge was a little bay, and eagles would dive down plucking herring from the water every 15 minutes or so. I had been wanting to see this my whole life, and in Sitka it happens all the time. 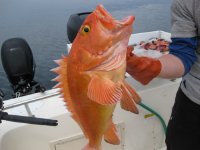 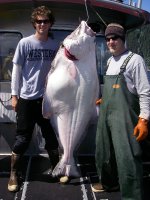 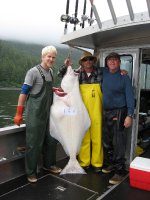 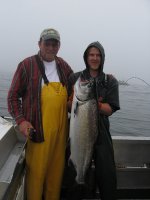 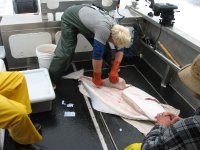 We caught many different kinds of fish, King, Coho, Chum, and Pink Salmon. We caught many different kinds of delicious Rock fish, Yellow eye rock fish, and Ling cod. We caught big Halibut, the biggest ones were 220, 165, 148 lbs. That was my favorite part of the job, landing the big halibut. The client would reel it up to the surface and my captain would stick a big 8” shark hook in its jaw, so it wouldn’t break the circle hook when we heaved it in. Then he would lift it’s head out of the water, and I would take the 18” wooden gaff and would hit it on the head as hard as I could. Then I would gaff it, and we would heave it over the side and beat it over the head some more, stunning it so it wouldn’t destroy our deck. It went smoothly at times, other times the bucking and heaving fish would pound away at the boat with it’s large, powerful tail. On the way back to the dock, I’d fillet that halibut in 4 nice fillets at full speed on the boat deck with a razor sharp fillet knife. Kind of keeps you on your toes more than a desk job would.

So I spent a summer working a job I loved. Not everyone can say that. I didn’t spend any money while I worked up there, I took meals and lodging at the lodge. I bought 2 souvenirs before leaving, and that was it. It was another perfect job. I had 2 great road trips, traveling to and from Sitka. I learned new skills and had a lot of fun working the job. I was on the ocean everyday, watching the beautiful Alaskan landscapes. I saved a lot of money, virtually everything I made. These funds will easily fund this year’s trips, and allow me to save 10% of my income for “retirement“. Rolf Potts in Vagabonding (which is a terrific, inspirational read) puts it best “…the best litmus test for measuring your vagabonding gumption is found not in travel but in the process of earning your freedom to travel.” Words to work by. 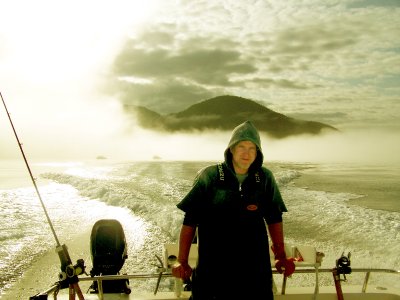 That was an inspirational read. It was informative too. Who knew that Whales are stinking up the atmosphere? I imagine they are pushing some carbon out their blowholes too. Are there more opportunities for willing deck hands at this company?

I want to work online ..
There are some thin if the legitimate work as a line there. Most are sites and marketing study for the site owner rich, not you. The only thing is true legitimacy Ebay, selling things you already own